No News, No Dues: March on Broadway Tackles Inherent Issues with Equity and Inclusion in the Theatre Industry 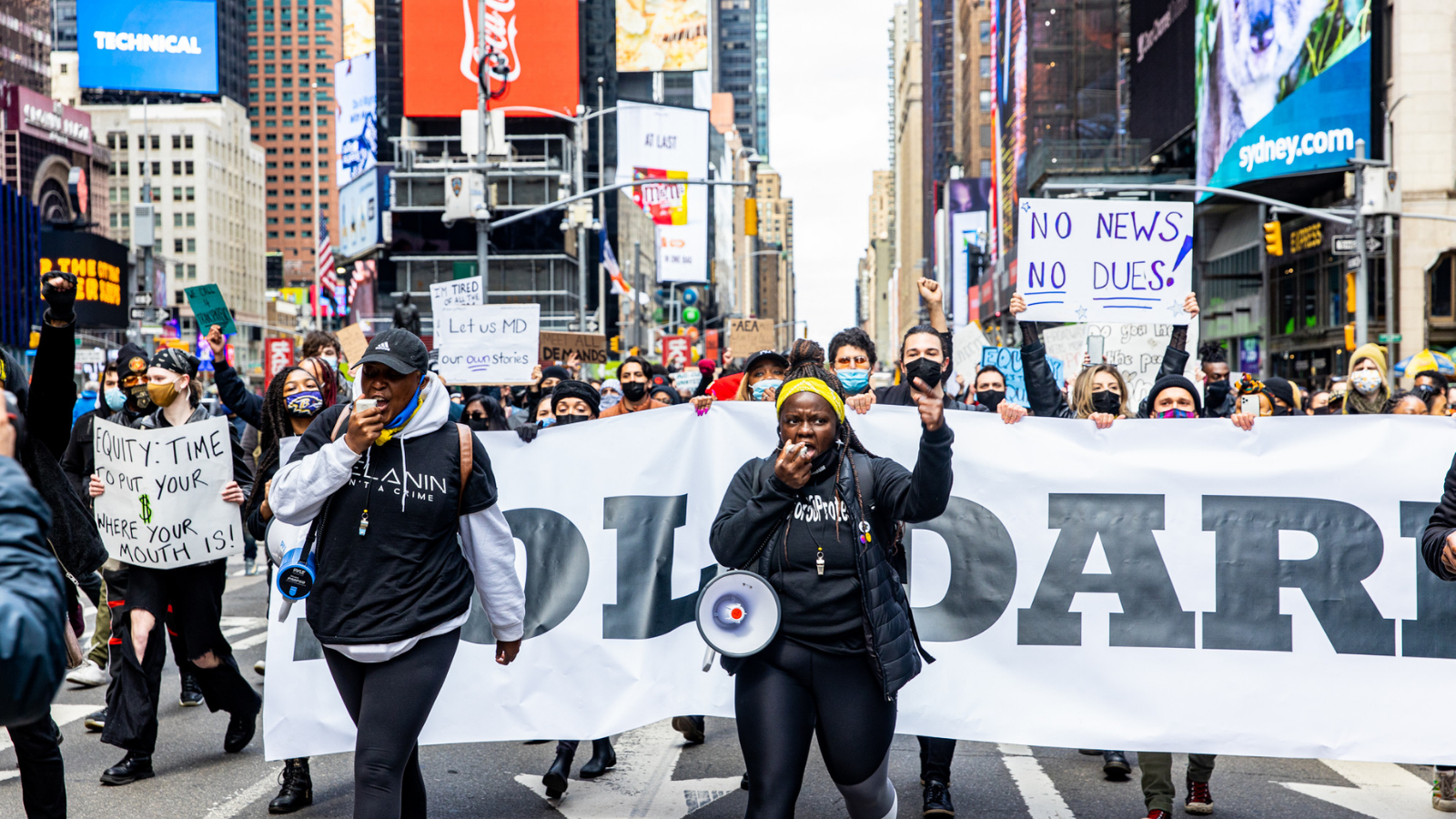 NEW YORK — Just 15 days following The Hollywood Reporter’s groundbreaking expose on the abusive behaviors and actions of Broadway producer Scott Rudin, hundreds attended the March on Broadway. This protest was not a direct response to the Rudin reports, but rather a culmination of conversations that have been brewing throughout the Broadway shutdown. The march was organized by activists Courtney Daniels, Nattalyee Randall, and Paige Levy. Featured speakers included Daniels and Randall, as well as Sis Khalil, Brandon Michael Nase, Diamond Essence White, Ryan J. Haddad, Eden Espinosa, and Karen Olivo.

Protests began in Columbus Circle where speakers delivered moving speeches about equity, inclusion, and the six demands penned by the organizers. Some of these demands included removing Scott Rudin from The Broadway League, calls for further transparency from the Actor’s Equity Association on how they spent the 2019-2020 dues and what they are doing to improve diversity and foster a safe environment for Black, Indigenous, and POC members of the industry, and to improve inclusion and accessibility for deaf and disabled artists.The full list of demands can be found here. Sis Khalil also shared her experiences as a Black, plus-sized, trans actress, and “The Politician” actor Ryan J. Haddad discussed the inherent inaccessibility and ableism of the theatre industry, and the need for clear representation of disabled people on stage.

Actress Diamond Essence White also spoke about the racist treatment she endured while acting as a standby for Zoe and Alana in Dear Evan Hansen. White detailed the blatantly racist comments she received from regarding her natural hair on nights she went on as Zoe. “The little girl inside of me who dreamt of being on Broadway was crushed by it,” she shared with Theatrely. “It cannot happen to my peers anymore, and it cannot happen to the little girls, boys, and gender non-conforming/non-binary folx coming after me. I would love to go back to performing, but not at the expense of my peace and mental health...not anymore.”

Eden Espinosa closed the Columbus Circle protest with a speech prompting white members of the industry to do more as allies. “If you think a year later that the black square [on Instagram] was enough, I’m telling you that you’re wrong. And that is an indication that you have not done the work. The work is not about documentaries, it’s not about reading books. It’s about looking at how you have perpetuated the white supremacy that is ingrained in our DNA,” she called through a megaphone to a crowd of hundreds, which was a mix of industry members and Broadway enthusiasts alike.

Brooklyn College student Brie Underwood was one of many young attendees inspired by the speakers. “They re-lived their traumatic experiences and stories to share with us for personal anecdotes about how this industry doesn’t make space for everyone,” they said. As a theatre student who will soon graduate into the industry, Underwood was one of many in the crowd belonging to the next generation of Broadway. “It is so valuable and crucial that people see people like them represented in any media or place in the world. As a non-binary person, it’s not often that I see people expressing gender identity like me on a stage, or if I do, they get misgendered in reviews,” they shared.

From Columbus Circle, the crowd moved downtown on Broadway before passing The Broadway Theatre, where just a little over a year ago, crowds of protestors gathered several nights a week in response to the casting of Amar Ramasar in West Side Story. These protests were also organized by Paige Levy. Unfortunately, they were cut short by the Broadway shutdown, and although there was a consistent crowd of advocates showing up every night, it didn’t elicit as large of a response in February 2020 as this year’s March on Broadway did. “It’s impossible to deny that this protest only happened because of the last year we had, and it only happened because the industry is shut down...people have been out of work for the past year, and their jobs seem a little more far away,” Levy notes. “We’ve had time to think, and really say, ‘hey, our industry is deeply rooted in white supremacy, and ableism, and sexism.’”

With the havoc that the COVID-19 pandemic has wreaked on the theatre industry, perhaps the singular silver lining is that a long overdue reckoning has erupted in the wake of this. “Broadway literally doesn’t exist right now, and people have had time to reflect and don’t want to deal with the same crap anymore,” White stated. “These old white producers need to step down. The problems start at the head and trickle down, and we will never see real change until the people who hold up these racist, ableist, transphobic, homophobic, fatphobic, misogynistic, sexist, and downright disgusting ideals are finally gone.”

So, what happens next? We aren’t in the aftermath of the storm, we’re in the eye of it, and there is much more work to do. Underwood suggests: “Sustainable change is going to start with reform. Dismantling not only how actors and crew are treated, but heavily reforming the Broadway League, producers, and everyone in the higher aspects of theatre controlling the industry. It’s not acceptable for them to claim to support minority voices, but then have a committee of entirely cis men making decisions for all theatre makers.” When nearly every Broadway theatre is named after a white, cisgender man, this is poignantly true, simply looking at the marquees. “They simply cannot make change and decisions for all of us,” Underwood added. “They do not understand us.”

To keep up with action items, upcoming protests, and ways to get involved, follow the 50 Mile Run for Justice Protest (run by Nattalyee Randall) on Instagram, and West Side Story Protest (run by Paige Levy) on Twitter, and any of the organizers or speakers of the march.