Offensive and Fabulous: TO MY GIRLS Offers Searing Critique of Gay Culture — Review 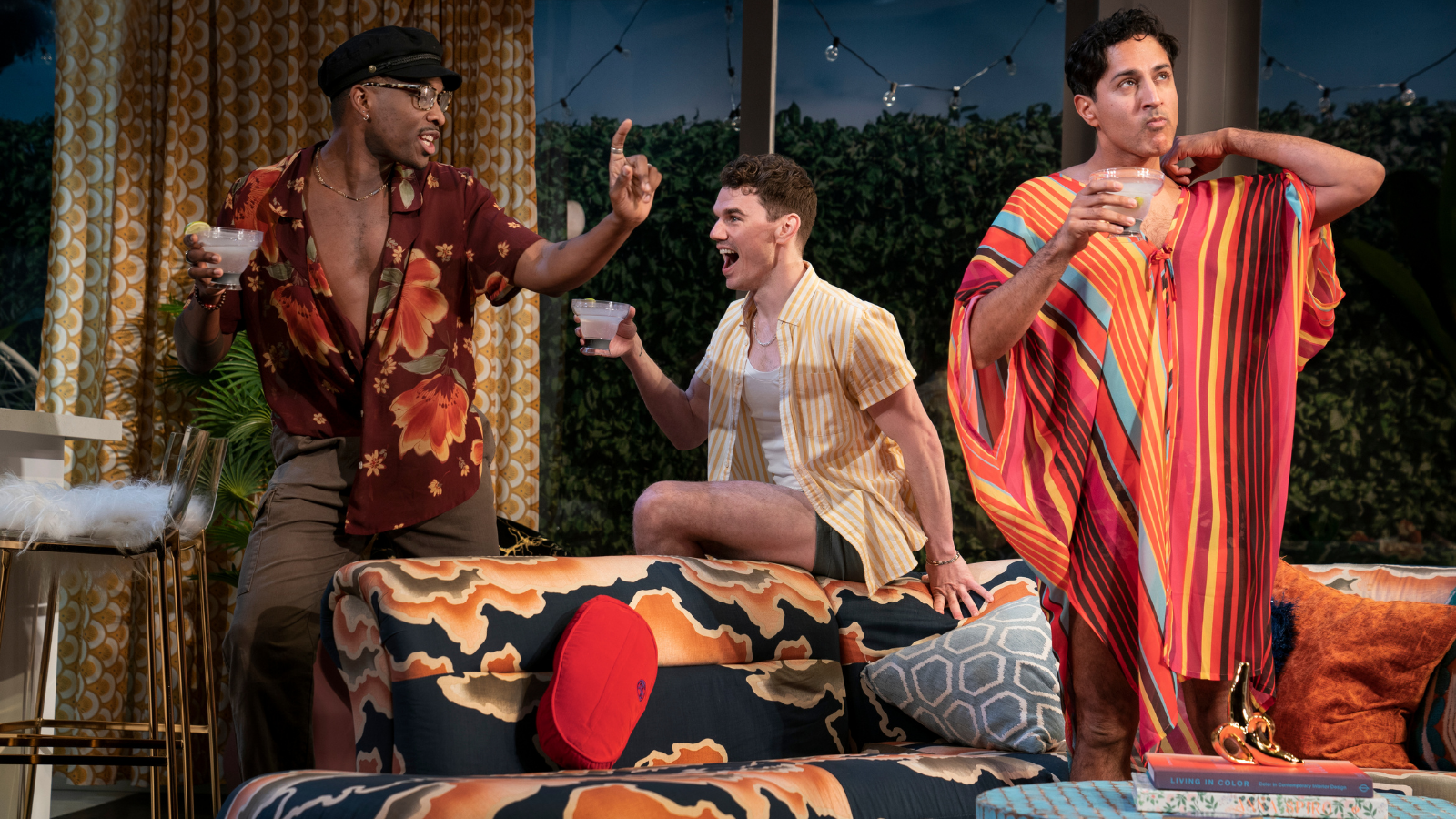 Without planning it, this week I saw three shows in a row with all-male casts: Take Me Out, American Buffalo, and To My Girls. I guess the last few years of reckoning haven’t changed some things. While I absolutely struggle with all-male shows (there are better ways to explore masculinity), JC Lee’s To My Girls, the only new work of the three, at least is comprised of entirely queer male characters, including several well-rounded characters of color, and all the actors and creative team members are queer.

In To My Girls, playing at Second Stage’s Tony Kiser Theater, a group of friends rent a Palm Springs house for a weekend to reconnect after the pandemic. As someone who just went on a trip to Palm Springs last month, I was able to clock the spot-on kitchy aesthetic of the house that set designer Arnulfo Maldonado created and the true-to-fashion speedos and caftans costume designer Sarafina Bush clothed the boys in, as well as the perfectly-shady Palm Springs references.

To My Girls is very specifically about gays in their late thirties, and while I don’t belong to said group, I have enough proximity, awareness, and expertise to state that this play is terrifyingly accurate. It serves as an almost anthropological study in elder millennial gay culture, complete with its hypocrisies, self-righteousness, hedonism, faux-wokeness, supposed love of community, and obsession with social media.

The gays in question here are Curtis (Jay Armstrong Johnson), a hot white Instagram influencer; Castor (Maulik Pancholy), an Asian-American writer-barista; and Leo (Britton Smith), a Black queer theorist TikToker. While at the top of the play they seem like any standard gaggle, we quickly see the fissures in the group: the unrequited crushes, the class distinctions, the political differences, the clashing temperaments, and the unresolved arguments lingering under all the gay pleasantries.

Early on, Leo, while filming a video for his social media pages, comments that he and his friends, like the racistly-named restaurant Wangs of the Desert, are “perfectly offensive and fabulous: the ideal encapsulation of our people. We are deeply imperfect and also kind of selfish and though none of that makes up for your legitimate critique, know our hearts are in the right place. Mostly. Hopefully.”

It is refreshing for a comedy–indeed, this is without a doubt the funniest play of the season–to fully and openly admit that its characters are imperfect and messy. They make mistakes, they are hypocritical, they call each other out but don’t listen to their own advice, and they say offensive things and shrug it off with a campy joke. They hide their issues under fluff, shielding their deep personal flaws under rainbow caftans and Instagram thirst traps.

Combined, this both makes room for some much-needed critiques of gay culture while also leaving ample room for hilarious comedy, searing reads, drunken dancing (the movement, by Patrick McCollum, is gay excellence), song choices that make the audience squeal (sound design by Sinan Refik Zafar, who chose only the best gay classics of the past 30 years), and general merriment and faggotry.

The most salient critiques of the group, and of their generation, come from outsiders and are achieved via slight of hand. Omar (Noah J. Ricketts) appears to be just a twunk brought back to the house for sex, but turns out to be a source of wisdom, who has a greater sense of queer history and generational issues than the guys staying at the house. Bernie (Bryan Batt), the daddy who owns the house is mostly written and played as a stereotypical flamboyant elder gay, has some of the best critical assessments of the issues of the group, like their virtue signaling; their sleeping with friends as a personality; their rudeness, and their staying friends with people who they don’t actually like anymore.

This speaks to a broader playwriting move that makes To My Girls successful. The play seems to be set up to be another play about gay men with money to burn, centered on the richest, hottest, white gay in the group. The play flips this script, though, and by the end, the group is there to be critiqued, Curtis more so than anyone. He gets called out for white privilege, classism, only caring about social media, sleeping with people his friends are into/dating, taking advantage of people who have crushes on him, and even for posting thirst traps with Maya Angelou quotes. He becomes the symbol of everything that is wrong with 30-something gays, and becomes de-centered in a story that he clearly though he was the star of.

To My Girls gives us a spot-on portrait of a deeply flawed group of gay men that doesn’t shy away from their issues. In this, it acts as a spiritual sequel to The Boys in the Band (and maybe as a corrective to The Inheritance). While Mart Crowley perfectly encapsulated gay culture in the late 60s, Lee here has achieved a similar feat for our era, holding up a bedazzled mirror (or should I say a front-facing camera?) to the 30-something gays of today.

Much like, The Boys in the Band, though, To My Girls cannot stick its landing, and the ending drags and closes on an undeserved happy note. The last 20 or so minutes of the play, from the moment when Jeff (Carman Lacivita) enters, do not add anything new, and the play would probably be stronger without them. Likewise, Lee does, amidst the well-written call outs and the even better written jokes, have a few missteps.

The issue that lingered most for me was a gender-related one. As the title highlights, the characters constantly call each other “girl,” “sister,” and more frequently use she/her/her pronouns for each other than he/him/his. This is certainly accurate to subsection of gays, and there is absolutely a history to this practice, but knowing all we do now about gender and pronouns (and, of course, the legal discrimination and violence trans people face daily), such willful and supposedly-silly misuse of pronouns does not sit right with me. Though many of the group’s problematic gay affections, hypocrisies, and privileges (using wrong pronouns for fun is cis privilege!) are rightfully called out, this disappointingly is not. The only hint we get is a joke: in one scene, the guys get confused to whom the “she” being referred to is, a gay or a dog. In response, Castor yells “We misgender each other all the time!” By using such a serious word, this comes close to recognizing the problem, but Lee sadly doesn’t take this into a full critique or conversation.

The night that I saw To My Girls, the audience was almost entirely made up of gay men. I could only wonder: while those 30-something Hell’s Kitchen gays with enough expendible income to buy tickets sat there, watching this play, laughing and “yaaassss”-ing, did they realize that it was not just about them but that it was calling them out? Will this play inspire them, like the characters onstage, to introspect, to make some changes, to try to be better people and better queers? I can only hope. Lee, director Stephen Brackett, and the cast give a valiant effort, but if To My Girls teaches us anything, it’s that the generation of gay men represented on stage may be hesitant and slow to change, too self-righteous to realize that they are the problem. Only time will tell.

To My Girls is now in performance at Second Stage’s Tony Kiser Theater on West 43rd in New York City. For tickets and more information, visit here.