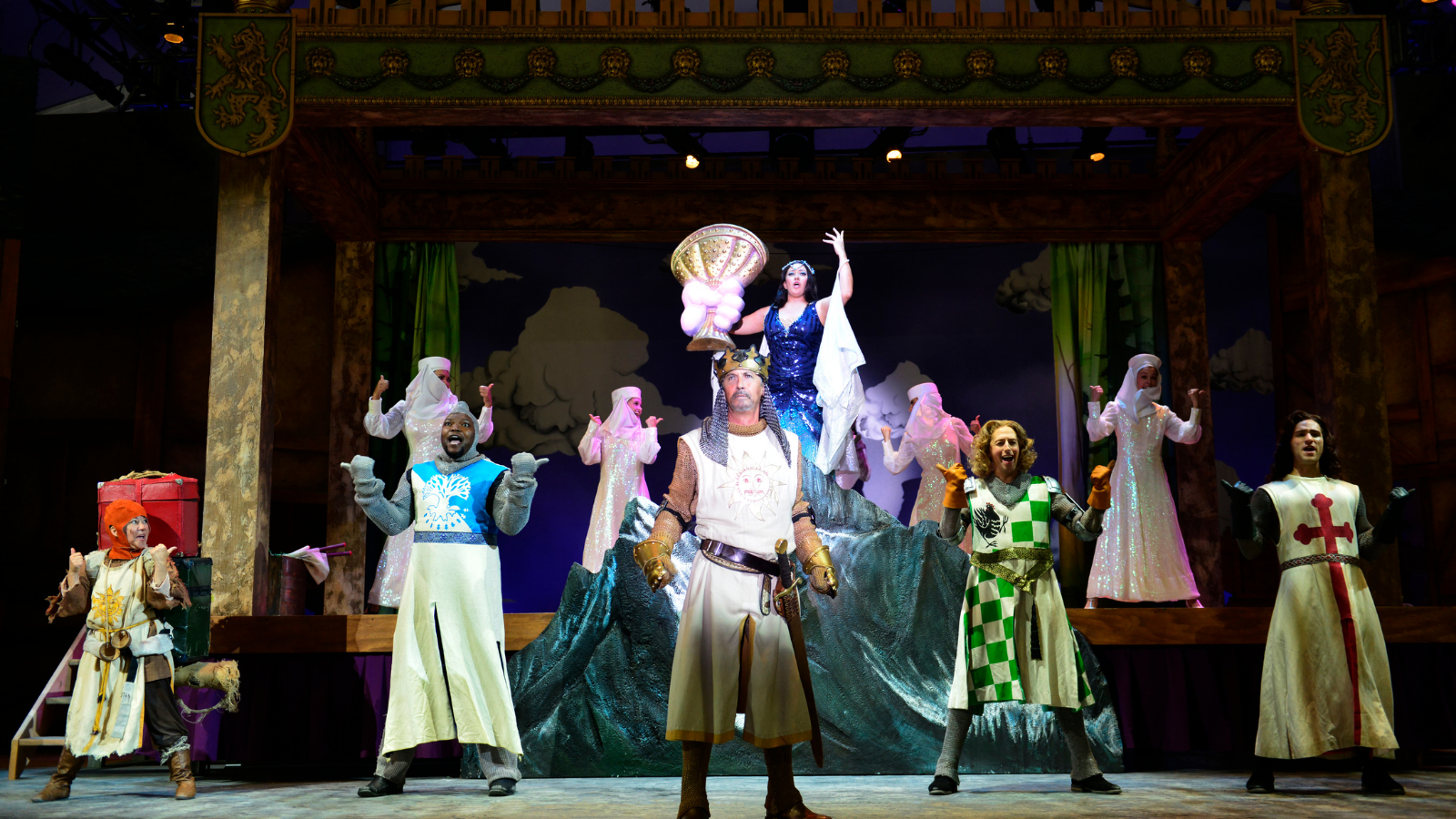 Charles Shaughnessy as King Arthur and Mariand Torres as Lady of the Lake | Photo: Gary Ng
By
Kobi Kassal
No items found.
on
Category:
Reviews

Directed by BT McNicholl, the hilarious musical comedy is the perfect production to introduce patrons back to in-person performances. This summer at the Playhouse, the team has erected a 25,000 sq. foot outdoor Pavilion next door to the main theatre where seats are set up in “pods” of two to support social distancing–just think, you have plenty of legroom now!

Written by Eric Idle and John Du Prez, the musical is a rough parodic adaptation of the 1975 motion picture where King Arthur and his tribe of knights search for the Holy Grail and it goes exactly how you can imagine with a Monty Python script. The original production was a hit in New York, it grossed over $175 million and took home Best Musical at the Tonys. It has since had an extremely healthy life across the globe and with many regional houses to boot.

In Ogunquit’s latest production, Charles Shaughnessy takes on the role of King Arthur, reprising the role from the theatre’s 2010 production. Best known for his role in the 90s sitcom The Nanny, Shaughnessy is a perfect Arthur whose unabashed wit shines through. With so much chatter about a new Nanny musical, perhaps Shaughnessy is preparing for another bow down in the NY theatre scene. Beside him is a gaggle of Broadway stars including Jen Cody as the hilarious Patsy, the always talented Josh Grisetti as Sir Robin, and fresh off the heels of being named the winner of Broadway’s Masked Singer is Nic Rouleau who plays an array of roles with glee. No Spamalot would be complete without a diva-licious Lady of the Lake and I don’t think one better could be found than beltress powerhouse Mariand Torres who is tremendous and exactly what one needs after sitting inside for the past 18 months.

When a show works, you stick with it. McNicholl, who was entrusted by Broadway director Mike Nichols to oversee Spamalot across the world, puts the show on its feet in the nearly identic style of a national tour I caught a few years back. Jennifer Rias, who also choreographed the tour, returns to bring those show stopping numbers up to the Pine Tree State on Nate Bertone’s beautiful and gigantic set. At my performance, it was sometimes hard to hear crisp diction, but overtime I am confident the sound department will work out those kinks from the new venue and have it in tiptop shape.

Is Spamalot a perfect show? No, and it’s evident that over time the script is getting more and more dated by the year with some older references and jokes that might have held up in the early 2000s, but now make you squirm a little. That’s all in an evening’s entertainment with Monty Python.

Do yourself a favor and go see the Knights of the Roundtable on the quest, you sure will not regret it.