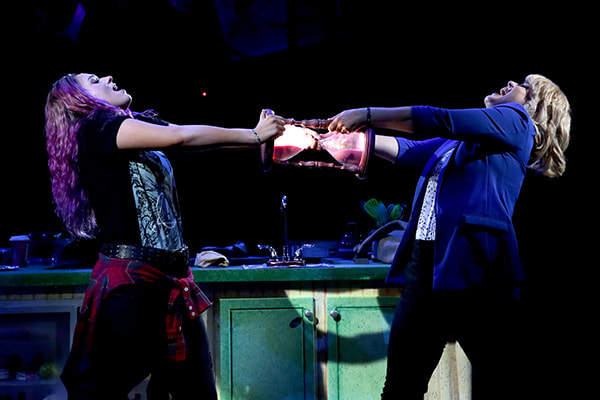 Things are getting a little Freaky up in Beverly, MA. We are talking about Freaky Friday, a new musical now playing at North Shore Music Theatre until July 21st. Following its wildly successful and beautiful production of Oklahoma! last month, NSMT is back with another big musical the entire family can enjoy.

Based off Mary Rodger’s classic 1972 novel of the same name and the subsequent 1976 and 2003 film adaptations, Freaky Friday tells the magical tale of a widowed mother Katherine who magically swaps bodies with her 16-year-old daughter Ellie the day before her wedding. This new musicalized version with a score by the Next To Normal team Tom Kitt and Brian Yorkey and a book by Bridget Carpenter keeps the time-honored story we all know and love but brings it into modern day.

The musical first premiered back in 2016 down at the Signature Theatre in DC, and I have been waiting for it to make its rounds up to the Boston area. Disney Theatrical originally had hopes to eventually bring Freaky Friday to New York, however their goal for the piece now is allow the family-friendly show run the regional theatre circuit and spread its magic throughout the country. With a cast of 23, Freaky Friday is a hefty show with flashy dance numbers that have the audience dancing along in their seats.

Lindsay Joan and Laurie Wells lead the cast as daughter/mother duo respectively. We spoke with Lindsay and Laurie all about the show on the radio last week - listen here. Ms. Joan’s impressive vocal abilities are truly top-notch. Broadway veteran Ms. Wells (who had never heard of Freaky Friday before the audition) brings the heart to this piece. For me, where this show lacks is in Ms. Carpenter’s book, when after the ladies swap bodies, Katherine acts more of a six-year-old than a sixteen-year-old. At points I questioned the believability of the swap, yet in the end it is all magical and makes for an outlandish story.

There would be no point to this review if we did not mention the exceptional Gerald Caesar as Adam, the lovable high school boy Ellie has fallen head over heels for.  After completing a phenomenal turn in Choir Boy on Broadway and performing on the year’s Tony Awards (see here), Mr. Caesar’s charismatic charm had both the characters and audience in the palm of his hand.  His vocal abilities are unparalleled and I would return to the show to watch this performance again.  NSMT favorite David Coffee returns for his 59th show at the theatre - attracting a respectable amount of entrance applause.  Tip of the hat to Aneesa Folds as Officer Kowalaki who brought the house down with her Act II solo.

The entire ensemble does a respectable job assuming the numerous characters they each play. Learning a show in nine days is not an easy feat, so props to the entire team for pulling it off. Watching the cast sing, dance, and fully exercise in a PE class number thanks to Jennifer Paulson-Lee’s amusing choreography is a sight to behold.

NSMT always assembles a killer design team with Kelly Baker for costumes, Jose Santiago for lighting, Daryl Bornstein for sound, and Rachel Padula-Shufelt for wig and hair design.  Kyle Dixon’s scenic design beautifully captured the feeling of the piece.  Being in the round, his zany yet lifelike designs elevated the entire performance.

Freaky Friday teaches us valuable albeit predictable lessons with its pop-filled score and silly premise.  North Shore Music Theatre never disappoints with delivering an enjoyable evening of theatre, so check it out and see just how Freaky it really is.