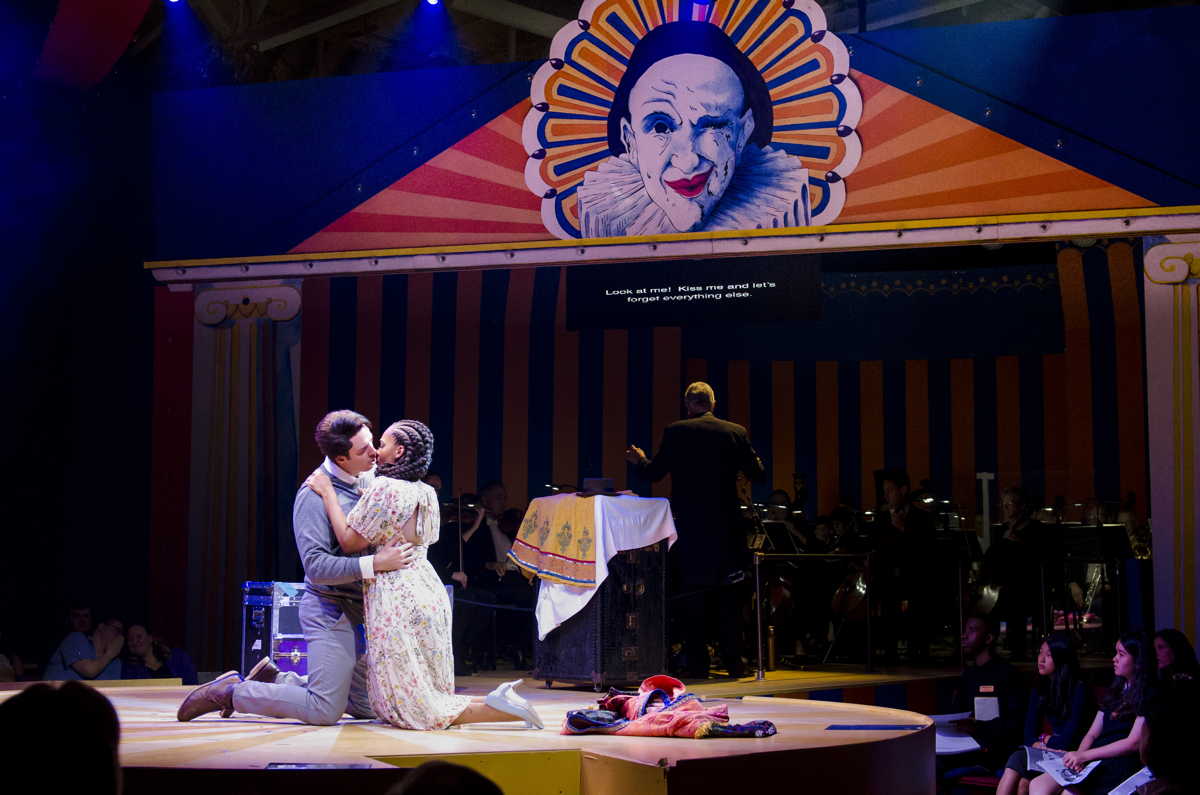 Photo by Liza Voll
By
Kobi Kassal
No items found.
on
Category:
Reviews

I can’t remember the last time I had this much fun at an Opera! That being Boston Lyric Opera’s new production of Pagliacci currently playing at the DCR Steriti Memorial Rink in Boston’s North End neighborhood until October 6th.

Ruggero Leoncavallo’s whimsical score has been thrilling audiences for almost 130 years now after premiering in Milan in 1892.  Under conductor David Angus and stage director David Lefkowich, the BLO has assembled a top-notch cast and creative team for one of the most beautifully immersive productions I have ever witnessed. The evening started off at the circus fairgrounds where we had the opportunity to play carnival games, see some magic, watch dazzling circus acts, and stock up on plenty of cotton candy before the show began. Julia Noulin-Mérat was the brainchild of creating this fantastical world as the set designer and everywhere I looked was a feast for my eyes.

Boston Lyric Opera is no stranger to grand immersive and site-specific productions (their Handmaid’s Tale was also brilliant), but the whimsical nature of this show created the perfect evening out. Once “inside the big top”, we were treated to the beautifully tragic 90-minute opera that showcased the wonderful voices of their cast. Lauren Michelle as Nedda has a perfect soprano and Rafael Rojas took on Canio with a throat infection even though you would have never known. Michael Mayes steals the night as the mischievous Tonio in his perfect baritone. The 30+ person chorus comprised of singers of all ages rounds out the production nicely. Charles Neumann brilliantly has designed a costume plot that goes perfectly with Anne Nesmith’s wig and makeup designs.  Pablo Santiago’s lighting illuminates the ice-skating rink magically.

All in all, the team has come together to create a wonderful night of live theatre. Boston, do yourself a favor and head to the circus immediately! You will not regret it.

‘Pagliacci’ is playing at the DCR Steriti Memorial Rink now until October 6. Get tickets here: www.blo.org