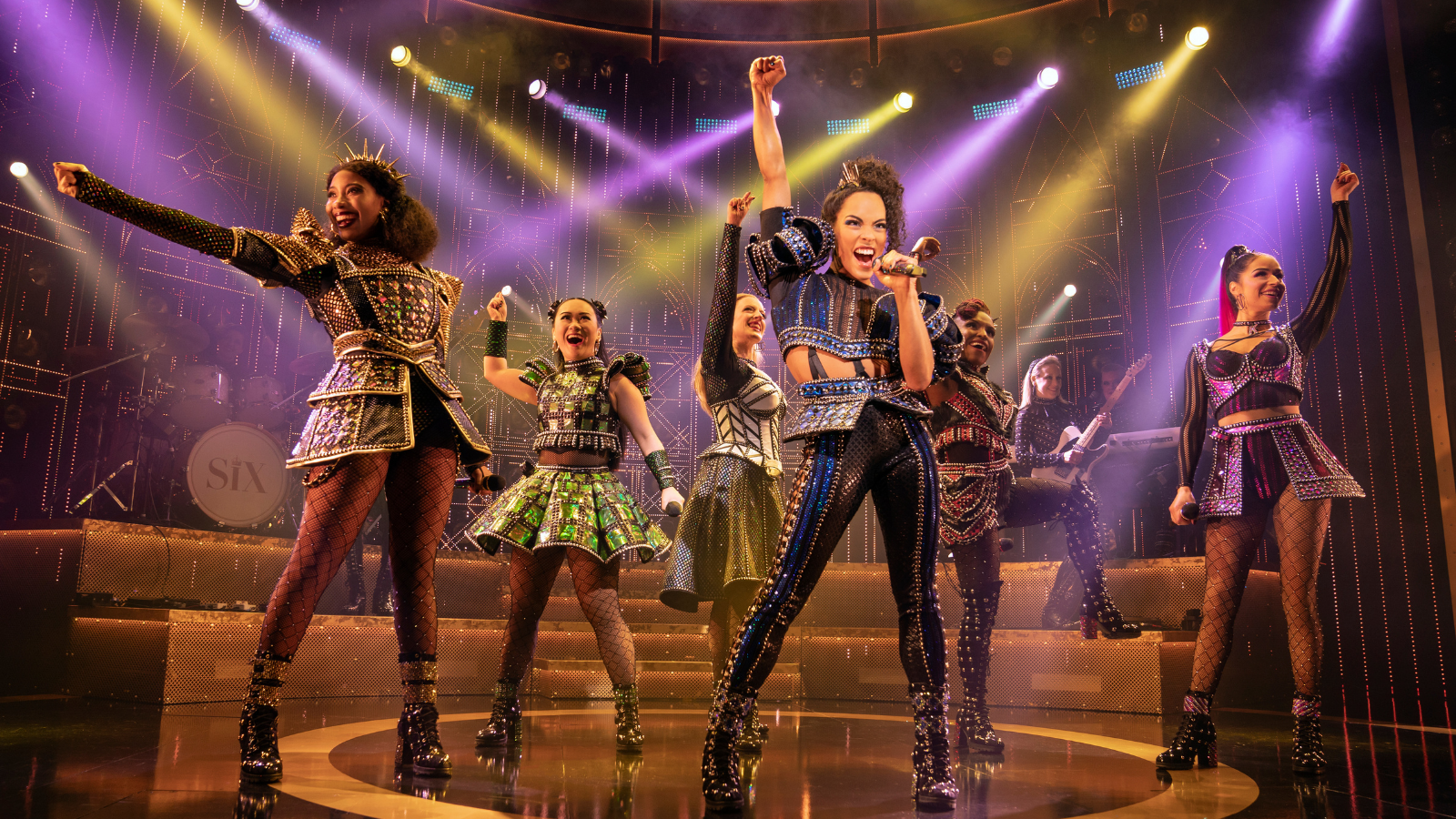 There is a small, though not insignificant, percentage of the population that holds Josie and the Pussycats, the 2001 film and its accompanying pop-rock soundtrack, as a high point of early aughts culture. A sly satire of the commercial music industry, it is filled with catchy girl-power bops that recognize silliness as inherent to community-building. There is a much larger percentage that believes 4 (2011) to be Beyoncé’s best studio album; arguably the singer’s most mature album, it explored the megastar’s inner life by combining the soul-searching of classic R&B with a contemporary pop vernacular. I live passionately in the union of this aesthetic Venn diagram, and I am more than willing to bet that Toby Marlow and Lucy Moss do as well.

Six, the new musical they created about the legendary wives of Henry VIII, is a fabulous example of the beauty that comes from taking pop culture—and the people, most often women, behind it—seriously. Running a brisk 80 minutes, it takes the form of a stadium tour turned Oppression Olympics when the divorced, beheaded, mourned, and forgotten queens decide to crown as lead singer to whomever’s life was saddest. They take turns offering sparkling pop numbers that draw delicious connections from our era to theirs without the schoolyard cringe value of Hamilton, while still delivering an education in hidden herstory (not to worry, they laugh at this phrase too).

The songs are, without hyperbole, miracles of modern musical theatre: completely, line-by-line relevant to what is happening onstage while maintaining a universal pop appeal that can play without context. The ghost of Cole Porter should be holding on to his fancy little boots.

Each song is incredibly specific to, not only the queens’ individual lives, but to the music and lyrics of modern pop stars whose own public personas echo the royals’ experiences. And so we get a Katherine Howard who, hypersexualized and objectified from an early age, wears an Ariana high pony and sings a Britney-style number about the imprisonment of youthful sex appeal. It’s the reason Anne Boleyn, basking in the privilege of being a (momentarily) successful Other Woman, prances around like industry babies Miley Cyrus and Lily Allen, serving sharp one-liners while remaining slightly out-of-pocket in hip-hop cadences.

(If these comparisons are not made explicit onstage, a delightful companion guide in the Playbills highlights the writers’ inspirations. More of creators being upfront about their muses, please.)

The six women—backed by a terrific onstage band of “Ladies in Waiting”—initially delighted to revel in their woes, wind up revealing more about womanhood (historical and contemporary), modern stardom, victimhood, pop culture, and survival than a musical with this logline has any right to. Capably co-directed by Moss and Jamie Armitage, the production does not shy away from the simplicity of its premise, sidestepping any staging issues by owning up to its concert format and allowing the women’s charisma to hold court.

And what charisma! There is not a single flaw in this production’s casting and, while the material itself is strong enough to hold itself through changes in performers, I fear this opening ensemble is like lightning in a bottle. Each actor’s work honors their monarch, as well as the respective myriad pop influences behind each queen’s stage persona.

The imperial Adrianna Hicks is a Catherine of Aragon who finds power in her hurt, and Andrea Macaset displays her incredible comic sass as the sparky Anne Boleyn. As the tragic-in-love Jane Seymour, Abby Mueller oozes melodrama with every bat of her eyelashes, while Brittney Mack shows the up-side of being ghosted by a Tinder date as Anna of Cleves, whose marriage was annulled when Henry decided her beauty didn’t live up to her portrait. Samantha Pauly gives appropriate Arianka as the greedy, confident Katherine Howard and perfectly sets up Anna Uzele’s demure Catherine Parr, who finally outlived the wandering-eyed king and made a name for herself as the first woman to publish under her own name in England.

Perhaps the musical’s greatest achievement is in turning an apparent “yass, queen” sensibility into a show of genuine empowerment and feminine tenderness. As the competition progresses, the queens begin to wonder if their brand of mass-appeal girl power is a productive tool for owning their narratives, and the show answers this in a way that is both affirming, nonjudgmental, fun, and somewhat radical for a Broadway stage. And so let it be decreed that Marlow and Moss may wear their crowns proudly.

Six is now in performances at the Brooks Atkinson Theatre on 47th Street in New York City. For tickets and more information, visit here.