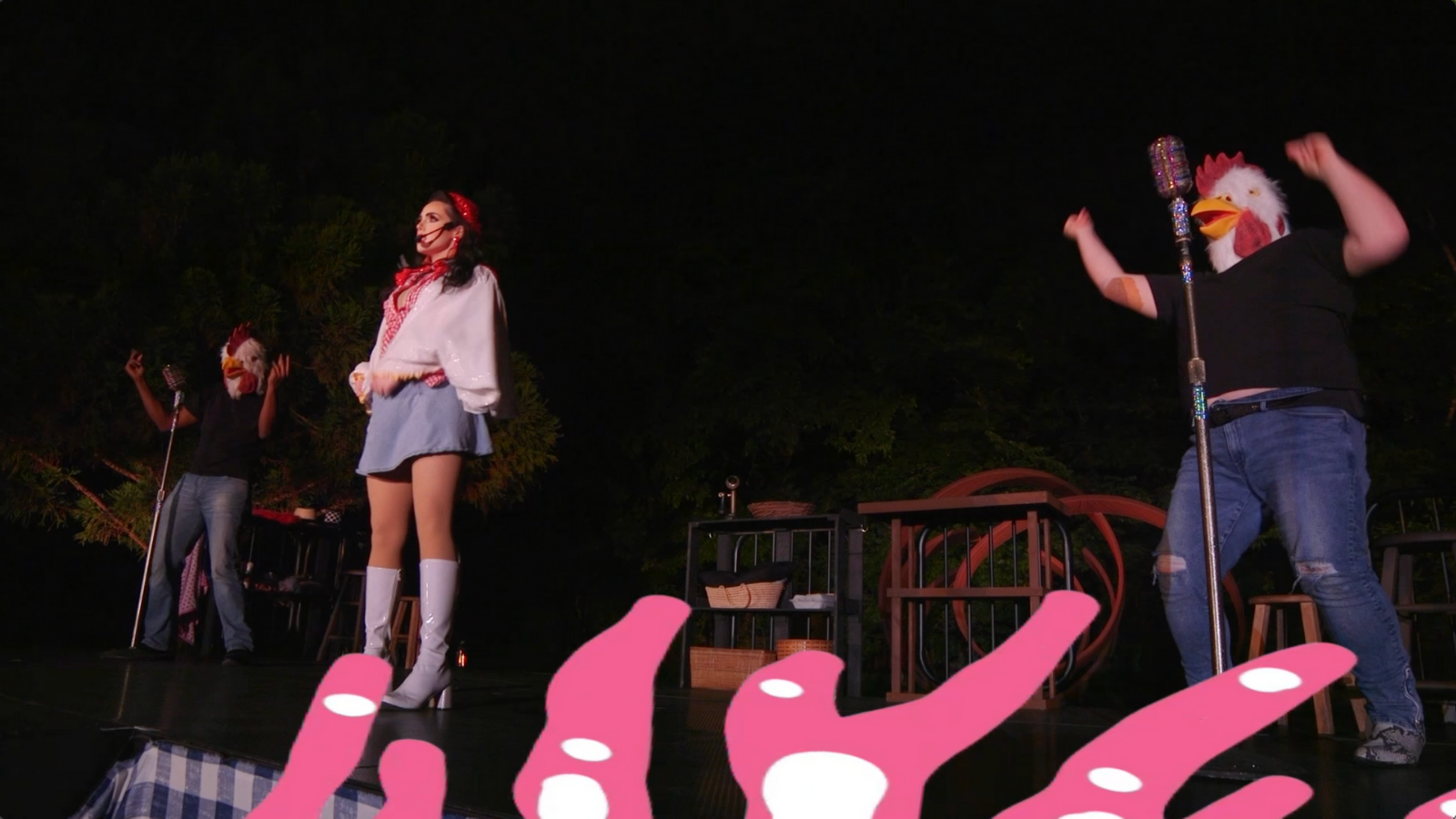 Ever heard the story about the Nativity Chicken? You know, the humble chicken that diligently followed the three wise men to meet Jesus? The poor chicken who was eaten by the men on the last leg of the journey?

If you’re puzzled, you should talk to Bonnie. Sloppy Bonnie, to be specific. She’s more than willing to pull up a diner chair and talk your ear off about the Nativity Chicken. She is the Nativity Chicken - a woman on one hell of a road trip where the ending is pretty beak… I mean bleak.

No Puppet Co’s eccentric morality tale Sloppy Bonnie: A Roadkill Musical for the Modern Chick covers a lot of ground, literally. Filmed live outside at OZ Arts Nashville, the streaming world premiere of the “unhinged country-western musical” takes big swings by adding animations and drawings that swarm the three performers on the gingham covered stage. The maximalist visuals match the high octane story and performances, which is pure magic. And while I desperately wish this magic was enough, unfortunately a murky plot and repetitive songs make it difficult to fully join in on Bonnie’s murderous road trip.

Murderous? Indeed! Bonnie’s new fiance Jedidiah, a Youth Pastor in Training, has ghosted her while on a retreat in the mountains. With the best intentions, Bonnie sets out on a road trip to find Jedidiah. Along the way, her “cookie-cutter femininity” wreaks havoc, and she accidentally becomes a serial killer.

Portraying Bonnie is the glorious Amanda Disney who deeply commits to the cloying yet charming nature of the character. Just when you think Bonnie can’t get any bigger, Disney slams on the gas leaving the audience no choice but to root for her. Disney’s voice also adds a much needed fire to the songs. Her wide range and country-twang is a highlight of the evening. Curtis Reed and James Rudolph II also star as the Cosmic Ensemble. Portraying multiple characters with ease, the actors do great work to keep up the quick, campy pace.

However, the rapid pace of the story feels at odds with how deeply we should feel for the characters, especially Bonnie. Leah Lowe’s tight direction does all it can to hold down Krista Knight’s hurdling book. At one point, Bonnie asks “Why am I here, Mamma? Am I a pawn?”  Being a morality tale, it’s hard to push past the one-dimensional quality of Bonnie. Yes, she is a pawn of the patriarchy, but I wish her transformations throughout the show were more satisfying. Perhaps, all of this is intentional.

At the top of the show, I loved Brinegar’s modern, country-pop-centered score, especially “Jesus Riding Shotgun, Bonnie at the Wheel.” However, there came a time where I wished the score offered a bit more diversity in style. Songs in the second half of the show, like “A McNugget of Mom’s Love” start to become quite repetitive and seem to hold back the juicier plot. Once again, it seems the story being told is at odds with the vehicle.

Back to the magic! And yes, there is magic in the show. I dream of being a member of the live Nashville audience, seeing Bonnie run through the crowd while pouring grain alcohol in her “half-dumped out large Diet Coke cherry lime-made slush from Sonic. Extra limes. Extra cherries.” I bet that feels electric. On one hand, I applaud the great work to transfer the live show to a digital platform. On the other, I think Sloppy Bonnie is a show best suited for live performance.

With a few changes, I look forward to meeting the murderous Bonnie again, in-person. With live performances returning, I hope that’s soon.