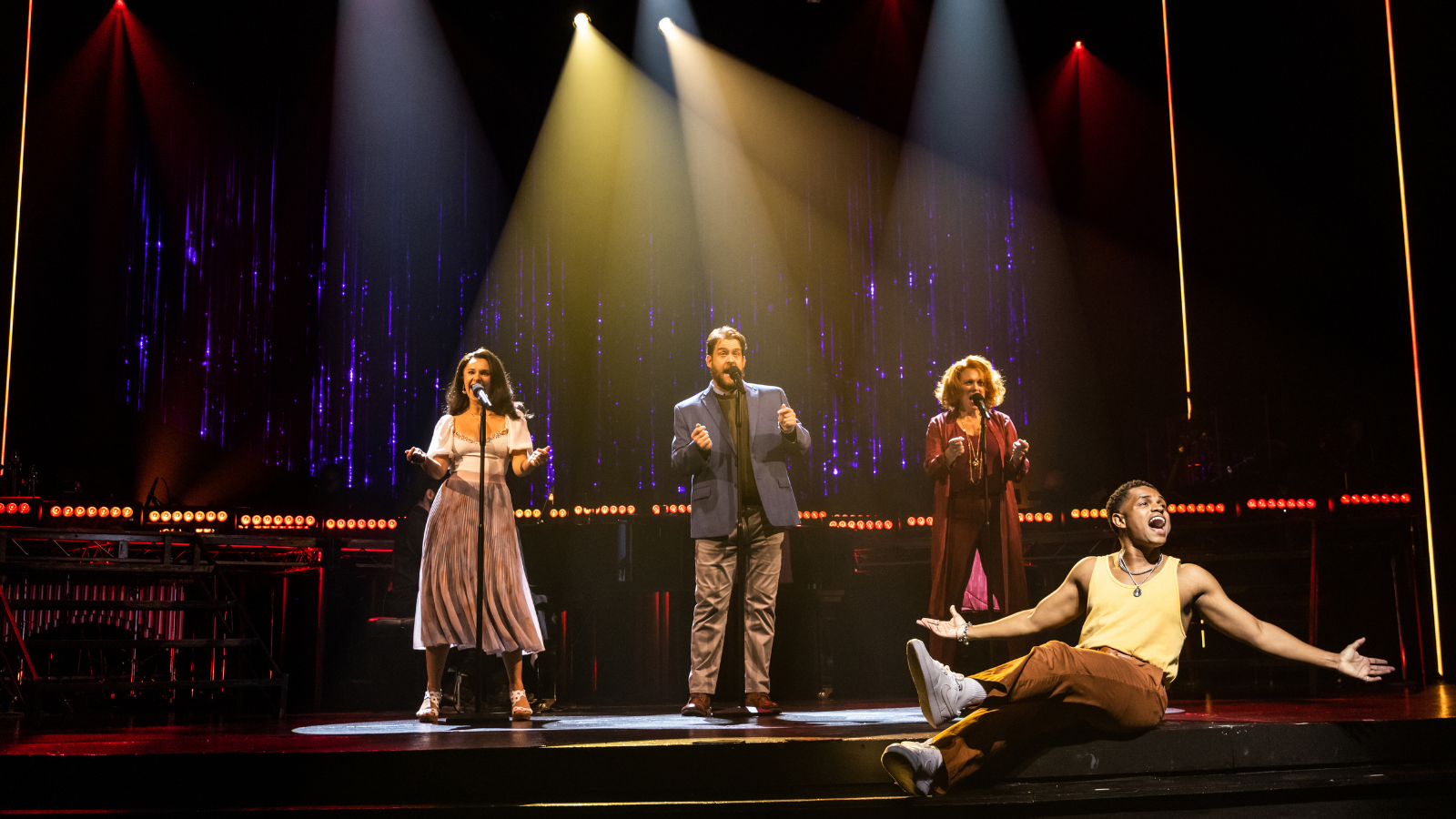 The cast of Songs For A New World | Photo: Evan Zimmerman for MurphyMade

More than 17 months after COVID-19 forced theatres around the country to cancel performances, Papermill Playhouse is back and rocking it to the rafters with a vibrant revival of Jason Robert Brown’s Songs for a New World.

“Songs for a Thousand Cabarets” could be the alternative title for this revue-like collection of ardent musical theatre-pop-soliloquies given its popularity with soloists and cabaret artists. Those artists include stars as varied as Karen Akers, Betty Buckley, Audra McDonald, and Shoshana Bean―not to mention hundreds of thousands of aspirants around the world.

Having grown up belting the original cast recording with my musical theatre friends as we skipped to rehearsal, I have always loved the show. But going into this Mark S. Hoebee directed production, I found myself wondering, “How does the full show of stand-alone solos, duets, and quartets stack up 26 years after its premiere?” As led by the sensational Carolee Carmello, as brilliantly as it did back in 1995.

Let’s recall that the mid-90s were a nadir for musical theatre. The world was still struggling through the AIDS epidemic, especially in New York City where an entire generation of brilliant theatre artists were decimated by the virus. Back then, folks were exhausted, afraid, and grieving, and though Rent had premiered to great acclaim the year before, the theatre community was still unsure of how to incorporate the then-current wash of pop sensibilities into its repertoire.

With Songs, Brown showed the way forward just as Stephen Sondheim had in the 70s and 80s. Like the elder musical statesman, Brown used irony, ambivalence, and multi-genre references to illuminate the psychological interior of his characters. Unlike Sondheim, he turned to symphonic pop rather than dissonance to express dramatic tension. In Brown’s hands, pop songs transformed into independent one-acts without a need for overlying context. Rather than tying them down to a specific plot, Songs’ musical arias serve as self-contained plots with their own transformative beginnings, middles, and ends

That freedom of possibilities is a running theme throughout the musical. This is a blessing in that it allows brilliant artists, such as Carmello to give audiences all of the life they didn’t know they needed, though it becomes a scattered morass of dissatisfaction in less capable hands.

For example, Andrew Kober’s casual approach to his songs caused me to ponder, “Does he really care about the emotional abuse that the woman of “She Cries” is inflicting upon him―or is he too blasé to care?” I felt this way throughout each of Kober’s vocal performances, while also wishing that he’d open his mouth completely to unleash a fuller sound; or bite into his lyrics with more grit and use their explosive consonants and fricatives to tell me what mattered most to him. Because of his standing in place approach, I frequently forgot what he was singing about or why I was listening to him in the first place.

Expressing how he felt about the proceedings was no problem for Roman Banks―Broadway’s first Black star of Dear Evan Hansen―who looked overjoyed to be onstage. Banks twirled across the stage in Kenny Ingram’s nifty choreography, while effortlessly exuding a light pop-tenor as if he were using Songs to audition for a not-yet named Usher musical. Though this allowed for a fascinating RnB driven interpretation of “The Steam Train” and “Flying Home,” Banks’ lack of vocal weight and dramatic coloring left something to be desired in “On the Deck of a Spanish Sailing Ship, 1942.”

“Sailing Ship” conveys the doubts and demands that plague an enslaved African man (or possibly a civil rights leader) as he struggles to motivate his people. Though fully invested, Banks looked entirely too inexperienced to understand the stakes of his words―almost as if he were a teenager speaking about raising children. One looks forward to seeing how he handles these songs ten years from now.

Meanwhile, Mia Pinero hit all of the appropriate dramatic gestures as Songs’ leading soprano. Unfortunately, on opening night, she looked as if she was holding back or did not yet believe in what she was singing. This started early during her performance of the great cabaret standard, “I’m Not Afraid”― which features a woman who spontaneously realizes that her fearlessness frightens the man she loves. Pinero sang the notes, I was unconvinced that she’d actually experienced “Afraid’s” emotional breakthrough and breakdown.

Vocally, Pinero’s voice was never less than fully engaged, particularly in her plush lower register, though she was given to pinching the sound when belting higher notes. Perhaps she simply needs to relax into her roles and trust that she has everything that she needs to make the magic happen.

Carolee Carmello, who somehow (criminally) does not yet have a Tony award, suffered from none of these failings. Carmello debuted on Broadway in City of Angels on October 8, 1991. 30 years later, her rapid fire vibrato and dark timbre remains ravishing and undiminished. Almost more so than any other living theatre artist, she best understands how to transition Brown’s conversational style into deep epiphanies without coming across as contrived.

In “Just One Step”, her neurotic housewife on the verge of suicide reduced the audience to tear filled laughter while elevating her plee to be noticed and treasured to the level of nuclear urgency. Similarly, she made the long familiar tale of regret in “Stars and the Moon '' seem utterly new while taking the vamp of “Surabaya-Santa” into Brectian torch song, and later, show-stopping blockbuster terrain. But she was at her absolute best in “The Flagmaker, 1775,” where she helped me understand the aching despair that grips anyone whose loved ones are away at war. If there is a God, she needs to grant Carmello a Broadway musical to star in right now.

Of course, even an artist of Carmello’s stature needs musical support and that was delivered with utter perfection by conductor and pianist Sinai Tabak―who never distracted from the action with his flawless piano riffs―as well as his crew of onstage musicians. If Carmello and the songs are this production’s stars, these musicians are its bones. Jen Caprio’s costumes looked as if they were selected from a generic department store catalog, Kelly Jame’s Tighe’s scenic design was simple and serviceable, while Charlie Morrison’s lighting exuded Vegas spectacle. Though the production vision never coalesced, nor did it distract from what mattered most: the music.

Despite enjoying the performance, I have a major bone to pick with Papermilll: they closed their bar and restaurant too early for patrons who have to use public transportation to attend the show. On opening night, the performance ended at 8:56 PM, meaning that 30 other patrons and I had to wait outside at Millburn station in the cold with nowhere to go. If out of towners are going to make the trek to see this wonderful production, we need to know that we’ll have a safe and warm place to relax until it is time for us to catch our train.

Hopefully management will resolve this issue.

"Songs For A New World" is now in performance at Papermill Playhouse through November 7, 2021. For tickets and more information, visit here.