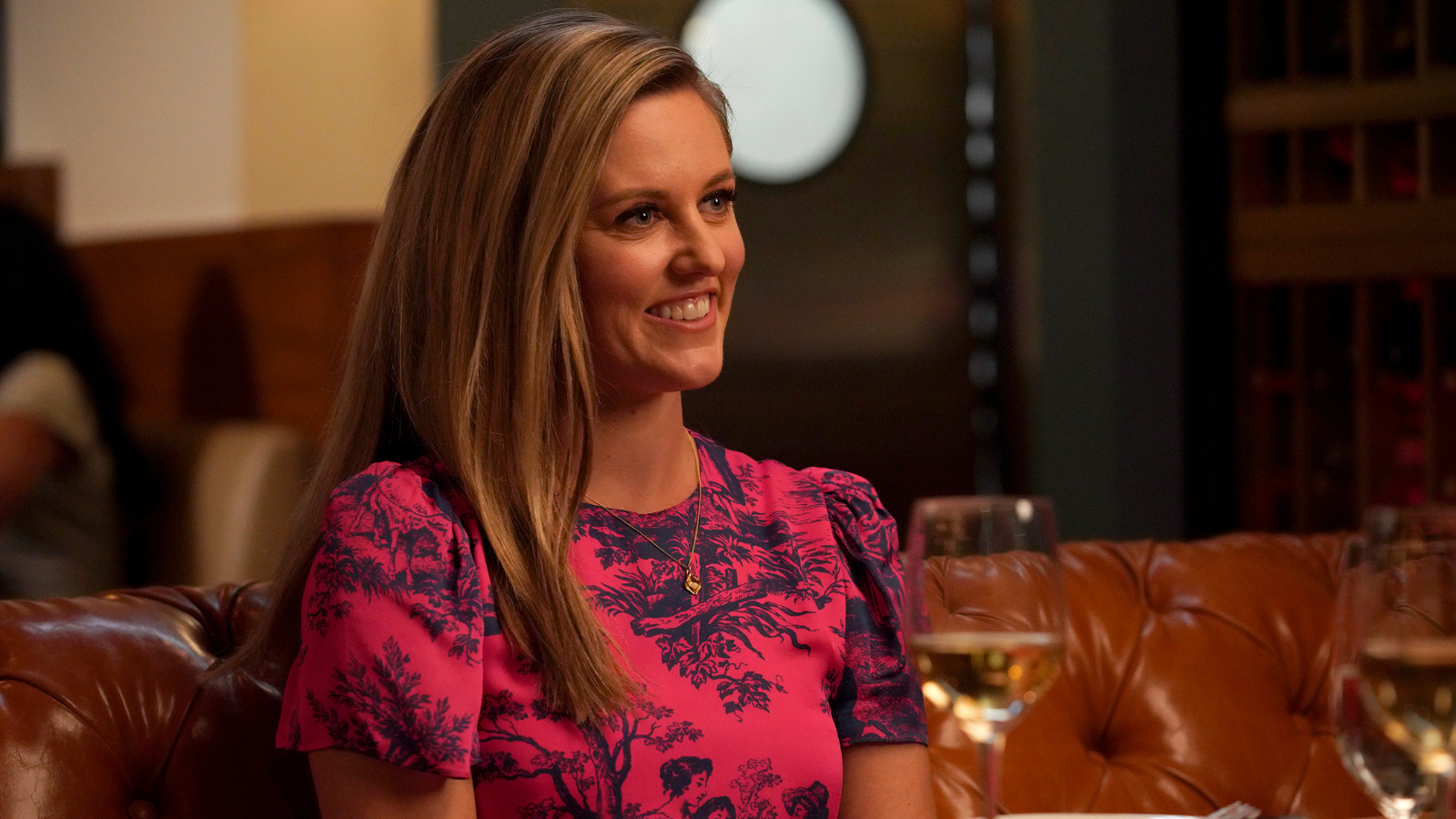 The Broadway actress, recognizable as the original Regina George in Mean Girls and Campbell in Bring It On, is thriving in a new role – starring in the NBC sitcom Kenan.

Alongside co-stars Kenan Thompson and Chris Redd, Louderman plays “Tami,” an ambitious and well-intentioned news anchor who co-hosts a morning program called “Wake Up With Kenan!” Season Two of Kenan is currently airing on NBC, but in her freetime, Louderman continues to run her non-profit songwriting contest Write Out Loud.

Last week, I met with Taylor over Zoom to chat about her transition between stage and screen in a conversation full of laughs and plenty of coffee. This conversation has been edited for clarity and length.

Before joining Kenan, you were featured on shows like The Good Fight and The Loudest Voice. What have been some of your favorite aspects of working on a TV show?

Well, this is a good thing and a bad thing, but… the schedule is definitely better and more conducive to work life balance than doing a Broadway show. But there are certainly days I miss, you know, the grind! Obviously with live events, there's just so many more nerves because so much can go wrong. But when you're doing TV and film, you really get a second chance or a third chance or a tenth chance. So while that makes for [a] less stressful working environment, the opposite side of that is [that] you're not working under pressure, which can be thrilling.

After so many years on Broadway, what were some of the skills that you were able to bring from the stage to the screen?

I had sort of discovered that I could do comedy a bit – Kinky Boots introduced me to that world, just gaining experience of what I would call “the science of comedy.” You get to run experiments, you get to have a control, which is the show every night. Then you can edit your delivery of the line and see how the audience responds… I think that really helped teach me what works, which was good going into television. But on the flip side, [in television] you don't have the audience to teach you, you have to really trust yourself. And, of course, I think the work ethic was really helpful. On Broadway you can't be lazy – you show up ready to go, performance mode, so that helped me show up to filming a scene just ready to figure it all out. I'm really grateful for my theatre experience.

You have some really fun, recognizable costars- including Kenan [Thompson] and Chris Redd. Would you say you were more intimidated or excited to jump in with big comedy names?

Both, I think! They are so wonderful. The first day, all my worries went away because they're just very welcoming and inviting. They want the show to be good so they know to lift each other up. And they did, they lifted me up for sure. That's something I learned with Mean Girls. Something I loved about working with Tina [Fey] and Casey Nicholaw was how “the best idea always wins.” I think that's true too in improv and in comedy. The ego is kind of at the door in a lot of ways. That's what makes it so fun and collaborative – really working together to find the best way to tell the story.

With your cast members on set, how have you been balancing work and fun?

You know, with COVID, it's made it hard to spend time outside of work, but it just happens naturally! With Kenan and Chris and Fortune [Feimster]... they're always doing comedy sketches – like they’ll turn the AD's announcement of “OK, we're going on to the next” into a whole comedy sketch. They just take the littlest things and make it fun. I feel like I'm always entertained… And Kimrie [Lewis] too is like the glue! We started doing the New York Times crossword puzzles together and everybody got so excited, like it was a sports game, you know? We just make it fun and I love that. I think that's so important and it helps us tell the story better, too.

Have you and Kimrie tried Wordle yet?

Oh my gosh, I just tried it the other day!

It’s so fun. It's hard too. I actually started doing the crosswords a lot with my husband now back home… If we do season three, that'll be my contribution!

In this season’s Christmas special and you have a surprise last minute solo at the holiday spectacular – can we expect any more singing or musical shenanigans from your character Tami this season?

One of the first two episodes that aired on our Season Premiere, not to give you any spoilers, but…Kenan and Tami find common ground. He said they were just work friends, but throughout the episode they find that they both love Broadway, so they do a Broadway number. That was way too much fun to do. I mean, to combine theatre and TV! We even had a quick change… it was definitely a moment where I got to feel confident and in my comfort zone.

On the show, you play Kenan's co-host on “Wake Up with Kenan!” So, Taylor, what is the most important part of your morning to ensure a great day ahead?

Oh this is good! I'm glad I have to recite this to you, because sometimes I don't stick to it.

Yes exactly! I have to journal. I always wake up and have my coffee, and I usually need to do a short journal and I need to do like 15 minutes of moving my body, whether it's a walk, whether it's stretching, whether it's yoga… those three things have always helped me feel just whole and alive throughout the day. Have I done them this morning? Well one of them [lifts coffee mug into frame]. You know, you can't do it every day, especially when you're working. But there were days I'd go in and have my hair done and then start my yoga routine for 15 minutes if we were waiting to film.

I was just reading that submissions for this year's Write Out Loud are open. Can you tell me a bit about the contest and maybe some words of advice for emerging writers who want to enter?

The contest came out of Mean Girls. [Mean Girls] was a dream come true for me in so many ways. And I had the time of my life and I was feeling very, very proud of the work we were doing… I would be at the stage door and I would have like, you know, little girls say “I want to be Regina George when I grow up,” and I just thought, [comedically screaming] “Nooooo!” Like what am I standing for? Write Out Loud really came out of that. I just thought, what can I do right now? So I called up my friend Ben Rauhala, and I was like “where do our resources [and] our tools cross paths with a need in the industry?” And we thought, well, songwriters really don't have “an open call” they can show up to, you know? So we just did a Google form and a swipe up on my Instagram saying like, “hey guys come do our contest!” and we got 500 song submissions! One really, really took off like a year later (“Little Miss Perfect”). That really gave us the confidence to keep it going. And it told us like, oh, there's evidence that this is working… I'm really proud of it and it's really rewarding to watch the songwriters hear their work come to life. As far as advice…I think it’s very important to have a strong story and an arc, especially because these are standalone songs and not necessarily within a musical.

Since you started, it’s been three years right?

Yeah, that's right. I mean, the pandemic makes it feel like forever, but yeah that’s right.

What has been surprising now that you're getting some momentum going with it?

The business aspects. You know, my whole life I focused on how to be a performer, right? So learning about taxes and paying people for their work and all these things – I really, really love it. I feel like a producer in a lot of ways. That's a cool position for me to be in and I enjoy it. But it's also super challenging. We just became a nonprofit last year and that's a whole [other] business model. It was really important to me that people knew that this is a nonprofit. We're not here to make money, it's not self-serving. I really, really wanted it to be for songwriters.

New episodes of Kenan air on NBC, Mondays at 8 and 8:30 ET. Submissions for this year’s Write Out Loud contest are now open and must be received by February 28.