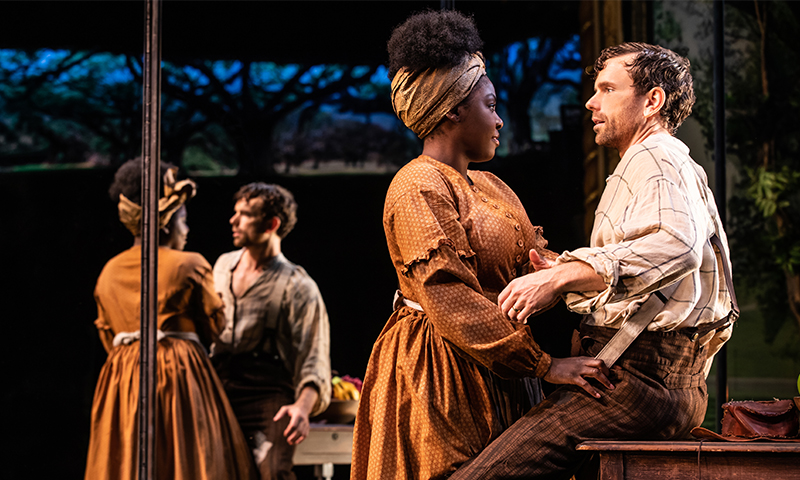 Joaquina Kalukango & Paul Alexander Nolan in the NY Production of Slave Play. Photo by Matthew Murphy.
By
Kobi Kassal
on
May 7, 2020
Category:
News

The 2020-2021 SpeakEasy Stage Company season will feature Matthew Lopez’s Olivier-winning The Inheritance. The epic two-part play explores what it means to be a young gay man in New York today, a generation after the AIDS crisis. Featuring Boston favorite Nancy E. Carroll and directed by Artistic Director Paul Daigneault, The Inheritance will run in rep from April 30 - June 20, 2021 at the Calderwood Pavilion.

Jeremy O. Harris’ wildly provocative Slave Play will make it’s New England premiere in a co-production with The Front Porch Arts Collective. Helmed by Tiffany Nichole Greene, resident director of Hamilton and Speakeasy's successful Between Riverside and Crazy in 2018, The New York Times proclaims it as “one of the best and most provocative new works to show up on Broadway in years.” Dates will be announced soon.

The 2018 Tony Award-Winning Best Revival of a Musical Once On This Island returns to SpeakEasy after 25 years, this time directed by Pascale Florestal with musical direction by David Freeman Coleman. With music by Stephen Flaherty and a book and lyrics by Lynn Ahrens (the duo is also responsible for Ragtime, Anastasia, and so much more), this new adaptation is set to run October 23 - November 21, 2020.

The 30th Anniversary season will also include Duncan Macmillan’s People, Places & Things directed by David R. Gammons. After sold-out runs in both London and New York by way of The National Theatre and St. Ann's Warehouse, Marianna Bassham and John Kuntz will now bring this harrowing tale of addiction to Boston for the first time running from January 8 - February 6, 2021.

SpeakEasy will also be producing Edie Brickell and Steve Martin’s Bright Star, which was scheduled for a run this May. The 2016 Tony Nominated Best Musical follows a young literary editor as she finds love and battles her career, all to the tune of a country and bluegrass score. Artistic Director Paul Daigneault will direct, with music direction by Eli Schildkraut, and choreography by Misha Shields. Laura Marie Duncan, who many will remember from SpeakEasy’s Fun Home, will lead the Boston Premiere which is slated to run February 26 - March 27, 2021.

“Each of these shows is uniquely theatrical and celebrates the importance of sharing our stories to better appreciate our common humanity,” said Daigneault. “At the same time, I want to affirm that the safety of our patrons, artists, and staff is and will remain our primary concern as the Covid-19 pandemic continues. We promise to keep our community informed every step of the way as we work for their safe return to our theatre.”

Tickets to individual shows are scheduled to go on sale in August. Visit www.speakeasystage.com for more info.