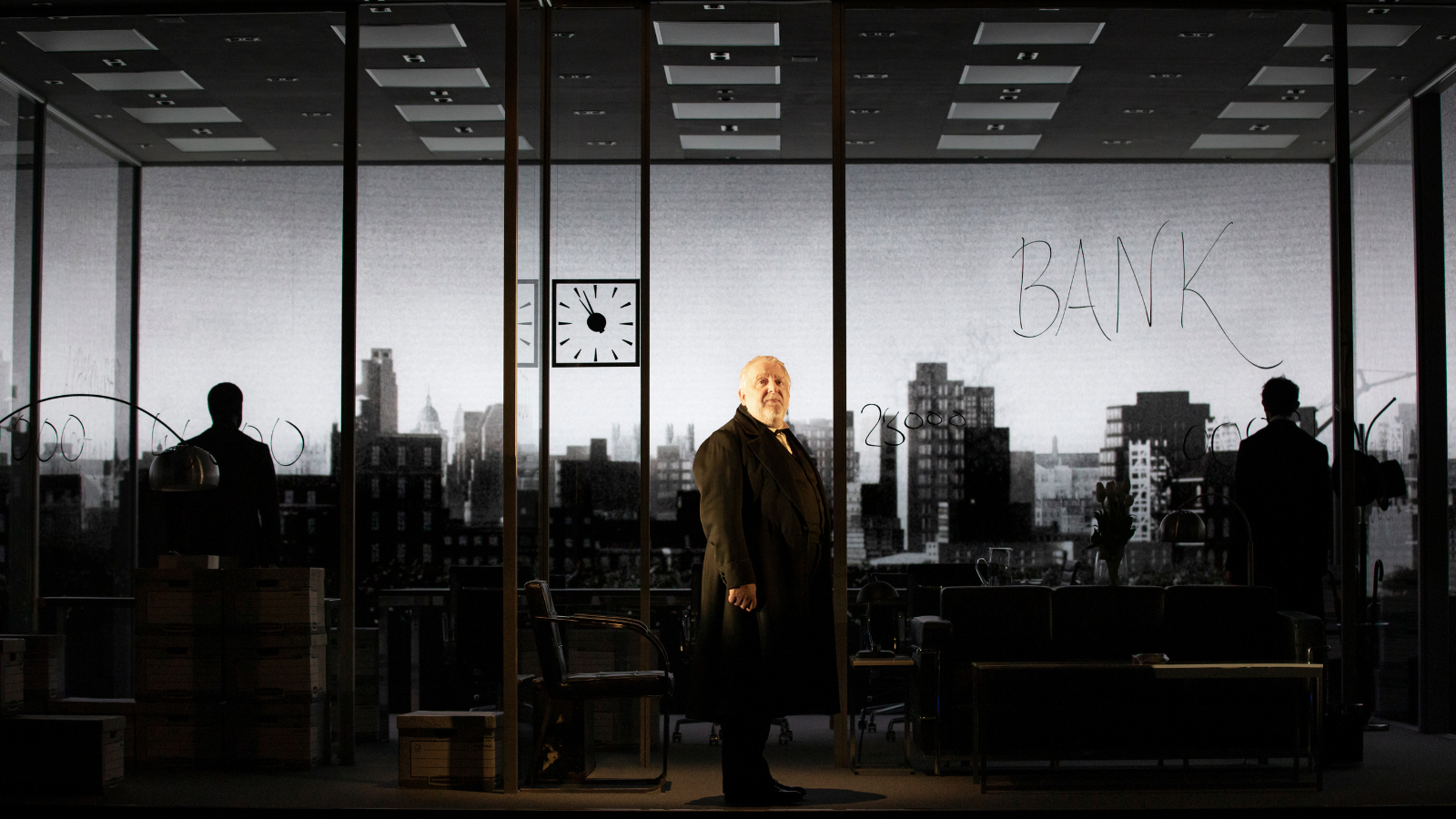 Steffano Massini’s The Lehman Trilogy takes place on a large, rotating office cube with sexy floor-to-ceiling windows that promise transparency. Against a massive screen on which settings, both literal and emotional, are expressed, it paints a portrait of the corporation as leader. An early scene sees the Bavarian-born Heyum Lehman, soon to be rechristened Henry upon arriving in New York City, stand against a backdrop of the East River, with the Statue of Liberty growing closer and closer. Right away, this American epic of greed, family, and power establishes that it is industry, not liberty, that leads the people.

Of course, Massini slams corrective asterisks on this dogma throughout the three act, three-and-a-half hour play, now in limited performances at the Nederlander Theatre. Adapted by Ben Powers from the Italian and directed by Sam Mendes, it follows a similar trajectory to Henry’s across the pond, having premiered in London’s National Theatre to roaring acclaim. Starring a British trifecta of Simon Russell Beale, Adam Godley, and Adrian Lester, it offers a masterful portrait of capitalism in action, from perhaps-genuine desire for self-improvement all the way through its souring, despicable end.

You see, Henry (Beale) soon finds himself in Alabama with his brothers Emanuel (Lester) and Mayer (Godley), and the three men find themselves broke, Jewish, and desperate in a foreign land. What’s a family to do? Through a series of opportunistic decisions fueled by the surrounding calamities of the encroaching Civil War, the brothers find ways to profit off the misery, stupidity, and desperation of others. This means dealing in cotton, coffee, tobacco—all slave industries—until reaching the apex of hollow mercantilism, trade.

The three performances are stellar, with the actors playing descendents and affiliates of the family all the way through the firm’s spectacular demise. They show more sparkle and sense of fun than one would expect from a work that could easily be played with dusty seriousness. A scene where a dying Bobby succumbs to the throes of mid-century excesses provides Godley a bravura moment of actorly commitment as he dances the twist straight into hell. As “The Beat Goes On” plays and Halls’ video design spins on and on and on, Godley personifies the manic 20th century engorgement that would remain at fever pitch all the way through 2008.

Lester, who joined the cast in June after Ben Miles departed the production, makes a first-rate Broadway debut following a storied career on UK stages. His characters are less flashy, more utilitarian—his first, Emanuel, is nicknamed “the arm” of the family—but he delivers them with steady wit and force. That Lester is Black adds a critical new dimension to a play that is resoundingly about Whiteness in action. While, by no means, “the Black actor” in the production, his casting reflects a larger improvement to the work: the script itself has been altered to include stronger references to the Lehmans’ having profited from slavery—an element so crucial to the play’s brilliance, and to its arc of American sin, that it is hard to imagine swallowing this epic narrative without that crucial angle.

Russell Beale, playing the story’s more outsized and often silliest characters, is outstanding. It seems wrong to single out a favorite in such a terrific cast, but his choices, like his Henry’s ideas are said to be, are always right. His Lehmans and satellite characters run the gamut from hostile to naive, seductive to foolish, and Russell Beale makes a meal out of all of them, while remaining generously grounded in the larger narrative.

An established director of incredible versatility, Mendes works his three actors perfectly, creating worlds and empires out of a single set. Along with Luke Halls’ elegant, direct video designs, Es Devlin’s cube, floating above the stage and rotating to give a panoramic view of the brothers’ growing ambitions, is perfect for the story, and Mendes combines its incredible modernity with theatrical touches both classical and Brechtian. The production feels high-tech and futuristic, but Mendes has the actors move around furniture and create buildings out of the very cardboard boxes that will later be used when the market crashes around them.

Nick Powell’s brilliant, tinkering score evokes the haunting accompaniments of silent film: an epochal invention which also emerged out of seemingly nowhere and steamrolled its way into ubiquity. Deftly played by Candida Caldicot, it reflects that same desperate feeling of the classical underscoring the modern, while holding the quiet wisdom that history will always repeat itself.

A medium of breathtaking modernity with European roots but American escalation, the birth of film soon begat The Birth of a Nation, that infamous and, unfortunately, impactful false narrative about White advancement in this country. Through the score—an invaluable part of the production—The Lehman Trilogy seems to say that modernity, and its corresponding progress, must always be followed by vile selfishness.

The Lehman Trilogy is now in performance at the Nederlander Theatre on West 41st Street in New York City. For tickets and more information, visit here.