THE SKIN OF OUR TEETH Brings Frightening, Unpredictable Energy to the Beaumont Stage — Review 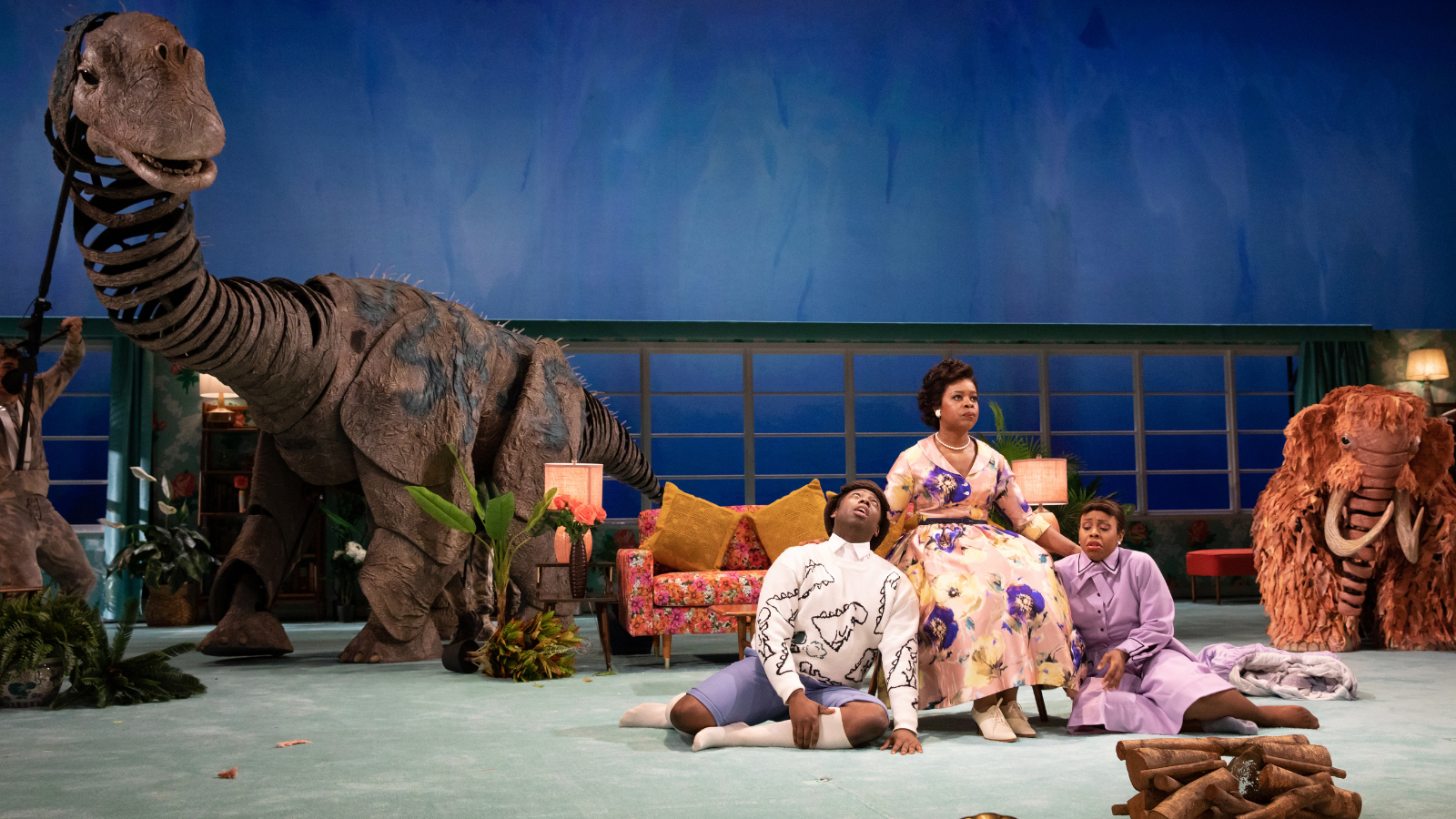 The Skin of Our Teeth | Photo: Julieta Cervantes

This is a crazy-ass play, it really is.

When visionary director Lileana Blain-Cruz joined the Lincoln Center Theater artistic team in 2020, the announcement came with a thrilling tease: Blain-Cruz would helm a production at the theater’s grand Broadway home, the Vivian Beaumont. Such a jolt of fresh energy for a space that has grown, in years of work dominated by James Lapine and Bartlett Sher, more than a bit safe and predictable, was an enticing prospect.

So when Blain-Cruz selected a revival of Thornton Wilder’s The Skin of Our Teeth as her Broadway debut, it was something of a surprise. Was this well-known, albeit rarely staged 1942 work really the fresh jolt we needed?

Within ten minutes of Lincoln Center’s massive, exhilarating production of Wilder’s sweeping epic, which opens tonight, it is immediately clear why Blain-Cruz chose this play, in this theater, right now.

“The whole world’s at sixes and sevens,” laments Sabina (Gabby Beans), the maid at the grand Excelsior, New Jersey home of the play’s central couple Mr. and Mrs. Antrobus. “Why the house hasn’t fallen down about our ears long ago is a miracle to me.”

CREEEEEK—a towering side wall splits away and leans, terrifyingly, over the stage. We sit in the alarm of it, for a moment, as the threat of destruction looms. Then the wall retracts, and the play barrels on. It’s a thrilling announcement of the unpredictability to come. And we’ve barely gotten started—the dinosaur hasn’t even entered yet.

The Skin of Our Teeth is about the end of the world, and the astonishing scale of this production’s sets (by Adam Rigg) puppets (James Ortiz) and seamless projections (Hannah Wasileski) conjure apocalypse to gleefully terrifying effect. Grand size is always assured at the Beaumont, but typically in service of elegant, ordered stage images. Here the scale conveys the frightening magnitude of natural disaster bearing down and the sheer destruction which could be wrought at any moment.

Of course, most of the credit for that destabilizing effect goes to Wilder’s text, which is as insane in structure as it is in scale. It follows the Antrobus family through three acts’ worth of apocalypse: first an ice age, then an epic flood, and finally a World War. In the first act, Mr. Antrobus (James Vincent Meredith), a genius inventor, invites hordes of refugees into the family home—a woolly mammoth, the prophet Moses and the dinosaur among them. Act two sees Mrs. Antrobus (Roslyn Ruff) confronting a crumbling marriage as Mr. Antrobous rises in status, but their son’s troubles worsen. Finally in act three, the fractured family–and a broken world–pick up the pieces following a devastating war.

That summary barely scratches the surface, and the play constantly interrupts and undermines its own narrative. Sabina the maid (later a beauty queen, then a maid again) keeps stepping out of character to lambast the writing. The narrative entirely freezes at the top of the third act when multiple actors are “taken ill” and an impromptu understudy rehearsal must be held. (Fitting for our times.)

Again, it’s an insane play, and this production lives up to that insanity. Judged as a much-needed jolt of unpredictably and theatrical mayhem for the Beaumont, Brain-Cruz’s staging is a roaring success (as evidenced by the hordes of Lincoln Center members bee-lining for the exits at both intermissions).

Now, does the production make the play itself entirely cohere? Probably no production ever could, which is part of the fun. But it gets pretty damn close.

Sabina is the best role, and the stupendous Gabby Beans makes a meal of it. With a hilarious herk-jerk physicality, she vacillates skillfully between exuberant clown and exhausted working actor. In one second act seduction scene Beans wordlessly contorts herself for several minutes, flinging her body into every orientation conceivable. It is just so, so funny.

On top of all that, Beans also successfully carries through the play’s self-questioning uncertainties. As the ice age intensifies in act one, she drops character and assures the audience: “The world’s not coming to an end!” Later, she refuses to perform a seduction of Mr. Antrobus, insisting the scene is simply too hurtful to be witnessed. Wilder puts all of his questioning and inconstancy towards his own play into her mouth, and Beans embodies these contradictions with expert precision.

Roslyn Ruff gets an even tougher assignment with Mrs. Antrobous. The writing often makes her a scold, cruel to her children and unfeeling towards others in need. Ruff finds an empathetic way in, tying the weight of 3,000 years spent holding a family together to the wisdom of a Black woman who traverses a violent, destructive world. This Mrs. Antrobus remains a tough figure to like, but not a difficult one to understand.

If Blain-Cruz’s vision falters in the play’s third act–which certainly is its weakest, though still transcendent in moments—that is because Wilder shifts focus to Mr. Antrobus and Henry (Julian Robertson), far less rewarding characters on the page. This production simply finds more of interest in the play’s women. So while Blain-Cruz has wrangled many of the play’s impossible contradictions, she has no particular take on the father-son argument which dominates act three (a baffling scene, in which the actors again drop in and out of character), and the production does slow as a result.

No matter. The overall achievement of this staging is still titanic, both for its wrangling with an impossible play and its pushing forward of a theater defined by traditions. One can feel the struggle of a creative team boldly willing the dried-up gears of an aging apparatus to move in new, exciting ways. Like Wilder’s play, the ultimate achievement is messy, imperfect, and seminal.

The Skin of Our Teeth is in performance through May 29, 2022 at the Vivian Beaumont Theater on West 65th Street in New York City. For tickets and more information, visit here.

Editor's Note: An earlier version of this review stated a majority of the creative team was making their LCT debuts, many are making their Beaumont debuts.