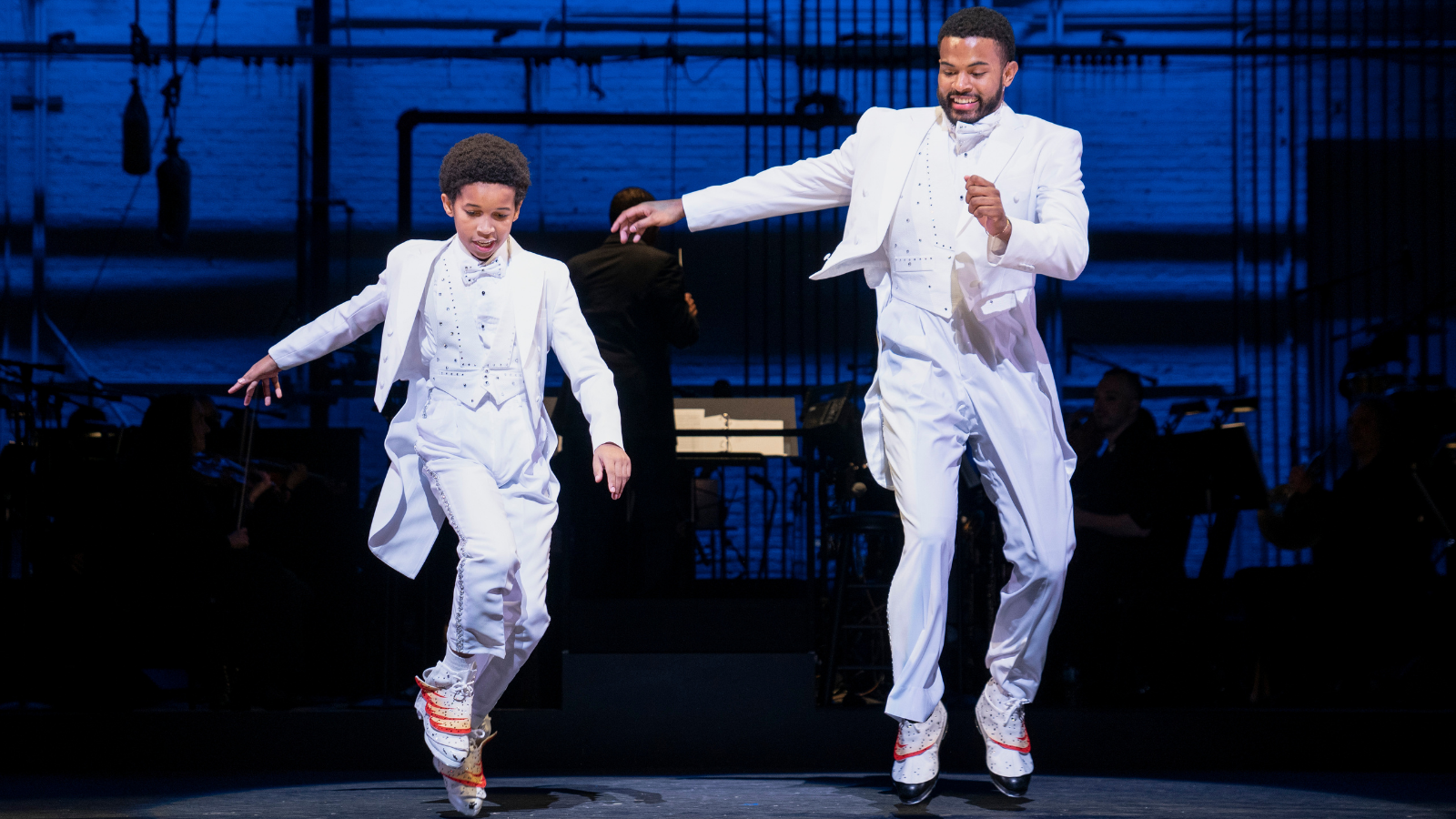 The Tap Dance Kid is a strange little musical from 1983 which just opened New York City Center’s yearly Encores! season. It’s often riveting, sometimes tedious, and always family-friendly — except for its 11 o’clock number, which is where the ‘strange’ comes in. Joshua Henry, who’d been heretofore relegated to the thankless role of an unsupportive, grunting father, is finally allowed to showcase his booming voice in a near-ten minute aria that almost puts “Rose’s Turn” and “Lot’s Wife” to shame. A frenzied breakdown over his inability to nurture his kids’ wayward interests, due to deep-seated insecurities about Black Americans’ ability to succeed outside the world of entertainment, “William’s Song” combines grotesque minstrelsy with cathartic release, and Henry sells it. He is abrasive, uncomfortable and brilliant, contorting his face into agonized stereotypes and knowing disillusionment. What’s strange is that everything before it is better-suited to a Saturday morning cartoon.

That’s not a bad thing, and Charles Blackwell’s book is a throwback to the wholesome, full-hearted family entertainments that have now eroded into either infantilized adult media or condescending kids’ stuff. Blackwell takes all his characters’ dreams and troubles seriously, and the story is engrossing whenever it keeps its sights straight.

Willie (Alexander Bello) is a sensitive 10-year-old with a love for razzle dazzle inherited from his mother Ginnie (Adrienne Walker) and uncle Dipsey (Trevor Jackson), whose late father Daddy Bates (DeWitt Fleming Jr.), a skilled showman, trucked them along the dying vaudeville circuit. He “couldn’t find room in the Great White Way,” as someone explains, and drank himself to death. Willie’s love for tap dancing is matched by his older sister Emma’s (Shahadi Wright Joseph) resolution to become the 4th Black person in New York to open their own law practice.

Dipsey, a choreographer on the brink of major success, is trying to find a young lead for an industrial musical he is directing for a trade show in Buffalo (hello, Bathtubs Over Broadway). Willie is the obvious choice, but his showbiz dreams are hampered by his father William’s (Henry) insistence that they have come too far to dance for white people. Ginnie, tired from a life of raising herself and her brother, is drawn to action by her husband’s stubbornness, as is Emma, who is dealing with her own four strikes in life (“I’m young, female, Black, and I talk back”).

The family dynamic is engrossing enough, and the story takes place during that period when Black life was finally being centered in mainstream American culture, a time when the ghosts of the past seemed to be receding, and an upwards momentum electrified every possibility. This all gets bogged down by the show’s many, many numbers, with music by Dreamgirls’ Henry Krieger and lyrics by Robert Lorick. These range from thrilling to pleasant but, with a whopping 23 songs listed in the Playbill, it soon gets exhausting. Every emotional beat heralds a new number, even for characters charming but secondary, like Dipsey’s love interest Carole (Tracee Beazer), quickly draining much of the plot’s tension and drive.

The musical deluge also takes its toll on the performers who, though excellent dancers and serviceable singers, buckle under their sheer volume. Jackson’s sexy R&B-tinged voice, a highlight of the first act, becomes strained as he emerges as the show’s co-lead. Jared Grimes’ choreography is exciting, if a bit too focused on athleticism over theatrics, but winds up taking a backseat to the danceless numbers which make up the majority of the song list.

Kenny Leon’s direction is straightforward and clear, and his cast performs without much fussiness. The young Bello is magnetic as the titular child star, and screen star Wright Joseph proves herself a commanding vocal presence. Adrienne Walker’s tender Ginnie is restrained but steadfast, just as DeWitt Fleming Jr.’s breathtaking moves as Daddy Bates.

But it is Joshua Henry whose achievement will be seared into the minds of anyone present, dancing dreams be damned. However much of an extraordinarily misplaced afterthought his solo might feel, it gives the production the explosive rawness it otherwise lacks. Lord help us if he finds a way to do it in tap shoes.

The Tap Dance Kid is in performance through February 6, 2022 at New York City Center on West 55th Street in New York City. For tickets and more information, visit here.