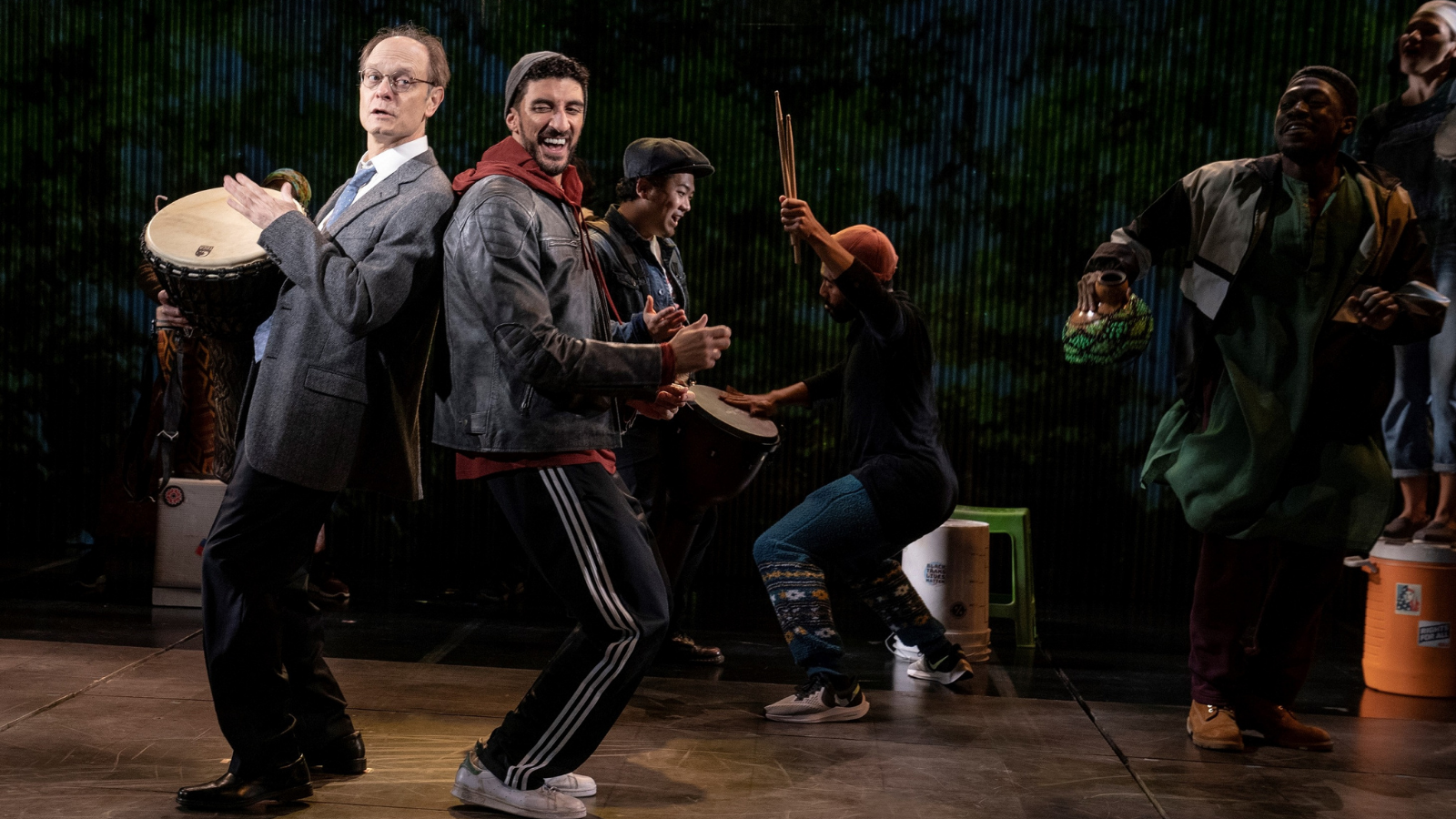 We first see Walter reprimanding his students for being distracted in class. Soon enough, however, he realizes he is just as distracted with his own life. Walter, played admirably by David Hyde Pierce, is a widowed economic professor whose spark is in danger of going out. In The Visitor, a new musical based on the 2007 film of the same name which premiered at the Public Theater, he rekindles that flame thanks to the discovery of two strangers who have set up camp in his unused Manhattan apartment. With music and lyrics by Tom Kitt and Brian Yorkey, and a book by Yorkey and Kwame Kwei-Armah, it is a story which attempts to bridge the gap between an established American and the two undocumented immigrants he finds. Whether it closes that same divide between its intentions and its results is a question the work seems to have left answered back during the film’s premiere.

Tarek (a clear-voiced Ahmad Maksoud) and Zainab (Alysha Deslorieux, robust) are a young couple—one Syrian, one Senegalese—who, through an apparent misunderstanding, have been renting Walter’s apartment without his knowledge for some time. Realizing that their lively dynamic might spice up his life, Walter allows them to stay there, and he and Tarek strike up a sweet little friendship. Before long, legal issues disturb their delicate balance, and Tarek’s distant mother, Mouna (Jacqueline Antaramian), comes to stay as well.

The leads, as well as the incredibly attractive ensemble, are well-cast, each imbuing their characters with a deeply felt, individual sadness. Though Pierce’s voice sometimes drowns beneath the score’s intensity, he plays the eager-to-change professor well. Becoming somewhat of a father figure himself, he finds a spiritual match in Mouna, who Antaramian plays with dignity and tenderness. As Tarek, the handsome Ahmad Maksoud, is believably magnetic enough to remain with Deslorieux’s Zainab, who fiercely protects her livelihood despite her boyfriend’s happy-go-lucky attitude.

Kwei-Armah and Yorkey’s book at first seems to find its emotional core in the contrast between Walter’s emotional displacement, after the death of his wife, and the couple’s actual, itinerant displacement. The lived-in pain that drives Zainab to sing, “we are quite good at knowing how to disappear,” as they face the prospect of having to find their eighth home that year, resonates with the lonely professor. But such comparisons must be handled with infinite care, lest the heartache of one privileged White man be irresponsibly equated to the material struggles of undocumented immigrants and, unfortunately, that is exactly where the story goes.

Following a poignant, if unoriginal, beginning, it winds up being little more than a White savior narrative in which people of color are handed insurmountable strife in order for a better-positioned person to learn a lesson about the importance of caring about basic humanity. Walter is not hinted to have ever been a heartless person—which renders his epiphany rather moot—but the book defaults to the tired trope, giving him an out-of-nowhere 11 o’clock nowhere in which he begs society to change.

Yorkey’s lyrics, which swing wildly between touching introspections and unforgivably corny sermons to an exhausted choir, take a similar nosedive as the musical goes on. An ode to New York’s imperious statue called “Lady Liberty” seems like a deleted first draft from The Simpsons, but is a haven of nuanced originality when compared to “Drum Circle.” Perhaps the most egregious number in the score, it is a regurgitation of The Lion King’s “Circle of Life” that only worsens when reprised as the show’s finale: a borderline-offensive sendoff to characters whose lives are spun in shockingly different ways.

That number is the sleaziest in Kitt’s music which, more than once, dabbles in the vaguely pan-African marimbas and drums of innocent ‘90s globalism. The rest of the score is mostly pleasant, if too confused by its influences to leave much of an impression. Taking from the sand-blown melancholy of The Band’s Visit and the pop-punk candor of Kitt’s own work for Next to Normal, it echoes the characters’ nowhereness without leaving its own mark.

Lorin Latarro’s choreography is nicely expressive, and plays well in and against David Zinn’s scenic design, which places the characters within three walls of corrugated metal not unlike those of a detention center. Walter’s apartment is nicely furnished, and the rest of Zinn’s localized sets efficiently and artfully fulfill their duty.

The Public Theater seems to be making good on their recent promise to diversify their audience—press access has nixed +1s to ensure that more outlets, at least 50% of which must be represented by people of color, are able to attend. It is an admirable and direct plan of action, but one that begs the question of what exactly this new audience is meant to do with such dated material. The Visitor, on its own, is a promise let down by its ultimate intentions, and I hope its title reflects the longevity of this type of work’s stay at the historically progressive institution.‍

The Visitor is now in performance at the Public Theater through December 5, 2021. For tickets and more information, visit here.