This CIRCLE JERK Is Back and Better Than Ever — Review 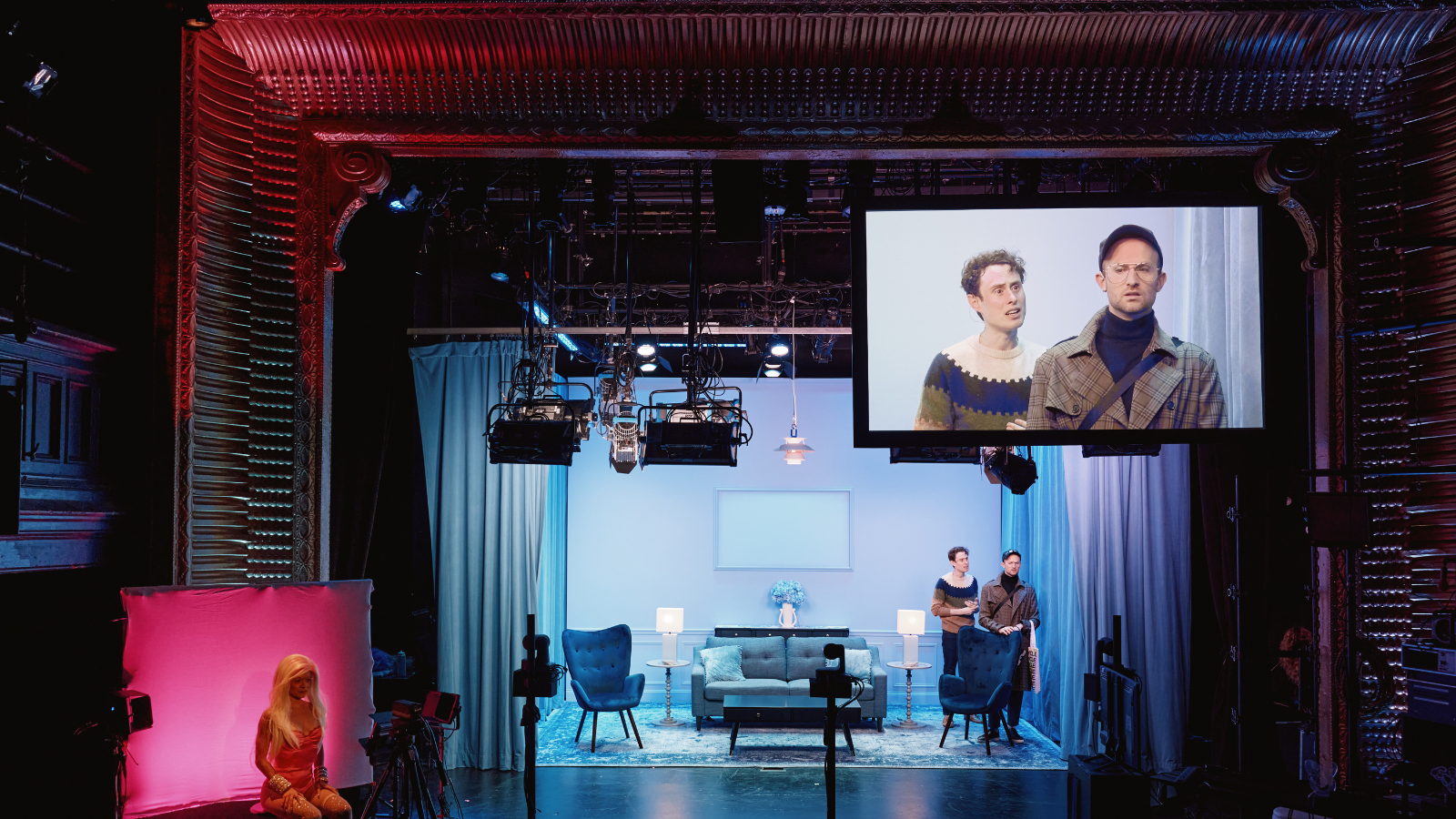 In late 2020, Fake Friends’ Circle Jerk took the internet by storm and (re)defined the possibilities for digital theater during the shutdown. It was even selected as a finalist for the Pulitzer Prize for drama. While it comes as no surprise then that the production is having another life, it is an unexpected plot twist to have an in person production of it. Circle Jerk is a digitally-native production, it was born and until now has lived on the internet, so there seems to be something slightly blasphemous about doing it in person. Staying true to their roots though, this production is simultaneously available both in person at the Connelly Theater and online–and even the in person version includes a large screen where the audience can see exactly what the digital audience sees.

Circle Jerk is hands-down the best digital theater has had to offer. Back when people were doing zoom readings and Raul Esparza’s live feed was freezing during a Sondheim anniversary concert, the crew at Circle Jerk were re-writing the playbook for how to make theater for a digital audience. One of the things I’ve loved most about their work is not only how digital it is, but how audaciously online it is; they fully embrace their work existing and being engaged with online.

Perhaps the best encapsulation of this is a line from Circle Jerk that refers to “this theater, the Twitter.” Inspired in large part by this, during the shutdown I started live tweeting reviews of online theater pieces (if Fake Friends can embrace the theatrical space of Twitter, so could I) and even wrote about it in American Theatre. However, once in person theater began again, productions wanted me to go back to writing regular reviews.

When I got the press invite to Circle Jerk in person, I thought it was the perfect oppurtunity to see if I could finally take my live tweeting experiment inside a theater. If anyone would understand, be interested in, and even embrace my hyper-online real-time reaction live tweeting criticism, it would be Fake Friends. To my delight, they said yes, and I sat in the back row, twitter on dark mode, and tweeted out my review (read it here). It was a fun and rewarding experience, and I’m here now to both reflect on that a bit and to expand my thoughts into something more long-form, perhaps more cogent and considered.

As it was originally, Circle Jerk is a revelation that slaps you in the face and then tells you to “werk henny.” It is a non-stop onslaught of gay references wrapped around a very loose plot (Aristotle is so over-rated anyway) wherein some fascist gays (Patrick Foley and Michael Breslin in multiple roles) on Gayman Island in the winter end up hatching an evil plot to use an AI-meme robot (the extraordinary Cat Rodriguez) to take over the straight world. Breslin and Foley (who also wrote it) have devised a dramaturgy that builds on Ancient Greek theater, Italian clowning, American musicals, theater of the absurd, verbatim theater, and all that the last 30 or so years of pop culture and Internet memes have to offer. The result is a high camp coup de theatre, a masterpiece in a category all its own.

What Fake Friends get so right, here and in This American Wife, is the anthropological phenomenon of gay men speaking in memes to the point that it becomes not just a vernacular or a lexicon, but also a way of life, a style of the performance of self, a dramaturgy. The characters speak almost entirely in gay references, volleying back and forth in faggy repartee that rivals Oscar Wilde, Cole Porter, and Tom Stoppard.

The night I attended was one of the production’s several “pride performances,” which meant a late-night, tipsy audience of almost all queer people who cackled at every reference, from Grey Gardens (the musical) to RuPaul’s Drag Race to Faith Hill’s Breathe. It was refreshing to be surrounded by people who got (and lived for) every single reference. This show would likely make no sense and maybe be rather unenjoyable to straight people–but this only makes me love it even more.

I also appreciated the small ways that the team updated the production and included several more recent memes and viral moments. The audience, clearly made up of many existing fans, yelled, for instance, at mentions of “gilded RAGE,” the Ratatouille musical, an audio clip from Six, and the line “just look at Broadway right now, we have a belting Marian Paroo and a not belting Fanny Price!”

In a slight wink to the in-person audience, there were even two nods to the hybrid nature of this production: Foley as the Troll, during an entr-acte monologue, told audiences to put their phones away, yelling “this isn’t digital theater” and Breslin talked about scoping out a gorgeous, old proscenium theater in the East Village, both of which elicited laughs.

This brings me to the in person part, and the questions I had going in: can such a digitally-native, Internet-residing production like Circle Jerk work in person? Should it be done in person at all, or should it exclusively live on our screens?

It was certainly entertaining seeing this in person, since the in person audience gets a lot of glimpses behind the curtain. Circle Jerk is a feat of logistics: 3 acts, 9 characters, multiple cameras, an endless array of costumes, props, and wigs. Sitting at the theater, you get to watch all this happen, every quick change and steady camera movement, which is fascinating to behold.

That said, I couldn’t help watching the large screen to see what the digital audience was seeing–a bizarre FOMO where I wanted to know what they were seeing more than I wanted to actually see what was in front of me. To my disappointment, while watching the screen there were several times it included pre-recorded footage at the start of scenes while Foley and Breslin were still completing their changes. This made me a bit sad and felt almost like cheating–why not wait the additional thirty seconds and be completely live? Why not show the digital audience the quick changes?

The best part of the show is Act III, a completely off-the-rails section where almost all the dialogue is memes and lip syncs, performed in triplicate selfie-cam in the style of TikTok and often synched to video clips that act as citations of the references flying by. Back when I first watched this online, this was my favorite part of the show by far, and inspired me to theorize the concept of TikTok dramaturgy. Going in, I was most worried about this portion, and as expected, it did not translate well in person. While it was a great deal of fun to see the mad-cap circus–full of wig changes, TikTok dances, and actors crawling under cameras to get in front of different ring lights–the in person visuals just didn’t work, and I had to watch the screen the entire time to actually get the full experience, complete with close up lip syncs and embedded video clips.

That said, Circle Jerk is still required viewing, it is a must-see, both if you saw it back when or have yet to experience it yet. If I had to pick in person or online, I’d likely recommend online, but there are undeniable joys of seeing it in person, watching the theater magic happen, and sharing the commraderie of laughing at gay references in a live audience. But whichever you choose, do not miss Circle Jerk, it is a camp classic like no other, and is absolutely something you can brag about seeing to your gay friends at brunch years from now. Plus, where else can you get a coaster that says “I pledge allegiance to the fag”?

Circle Jerk is now in performance at the Connelly Theater and digitally streaming through June 25, 2022. For tickets and more information, visit here.