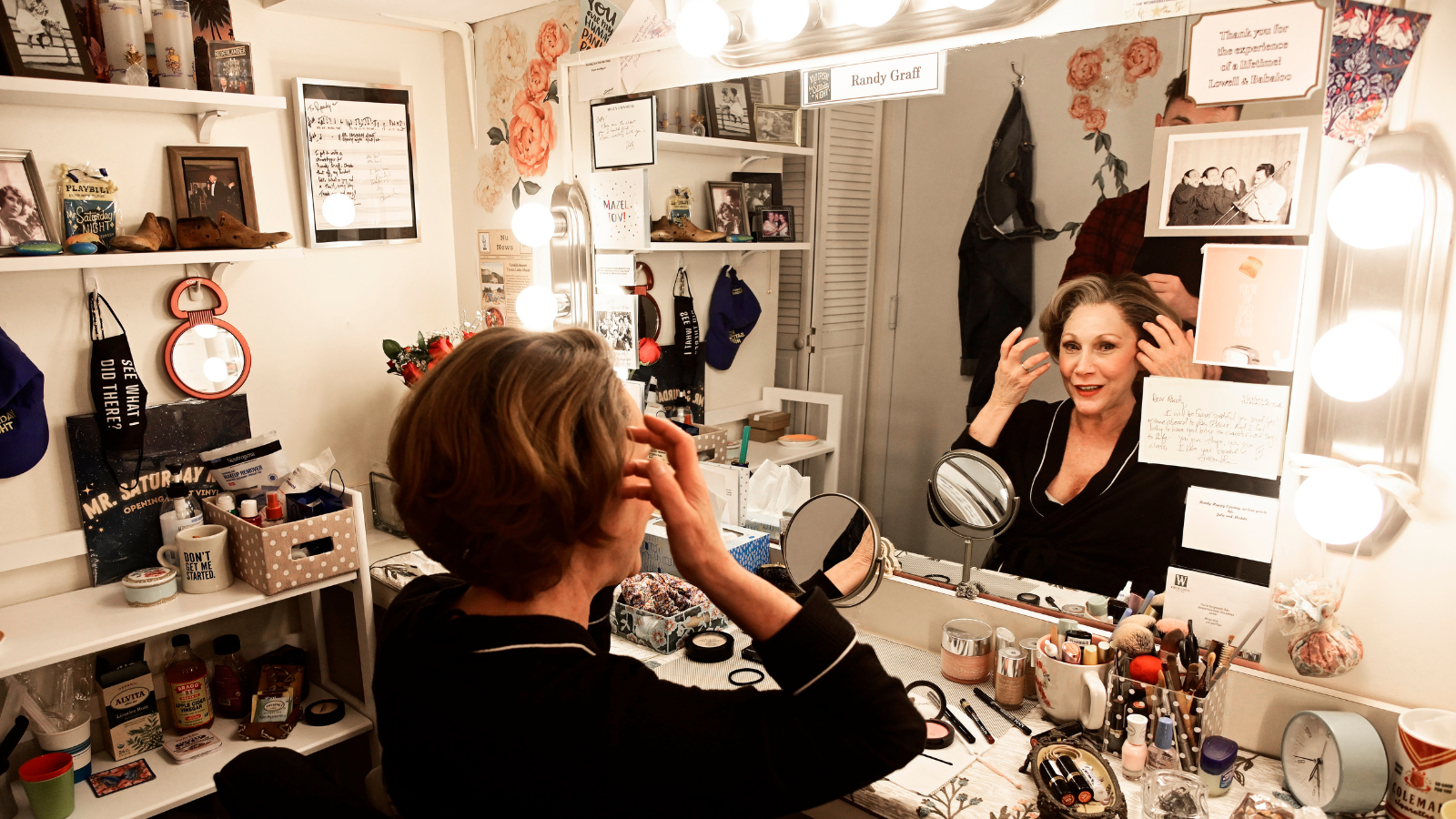 By
Michael Kushner
No items found.
on
Category:
Features

Randy Graff is too special.

Randy Graff saved my life. I don’t mean that in the sense of being trapped under a car and she lifted it. When I was being bullied in middle school for simply being me, her voice carried me out of the darkness. I related to her pain in I Dream a Dream on the Les Miserables original Broadway cast album. I kvelled over her comic timing in her vocals alone on the City of Angels cast album. She was so relatable. And to find out she had half a glass of white wine before her final callback for Les Mis made her even more relatable.

Randy Graff is too special.

When photographing backstage, it takes an absolute respect for the space – especially since I photograph in real time. When they are done preparing, they go on stage – there is no separate call.

Don’t step on anything. Don’t get in their way. Don’t disrupt their actual prep process.

You have to be a fly on the wall, all while searching for the moments of honesty and truth. What makes an artist's preparation so special? It’s the details.

I love photographing backstage of The Nederlander Theatre on 41st Street. It’s loaded with spirits and history having gone from The National Theatre to The Billy Rose Theatre to the Trafalgar Theatre and finally to the Nederlander Theatre. The original productions of Who’s Afraid of Virginia Woolf and Rent inhabited this space – and I’m not sure the energies of productions such as these ever leave. It’s almost like you can see Uta Hagen preparing in the wings for the earthy and forceful Martha or Idina Menzel in her infamous Halloween catsuit.

These dressing rooms have an old school vibe – not similar to the new facilities of The Marquis Theatre, built in 1986, which is spacious, brighter, and less lived in. The Nederlander is lived in, cramped (in the good, old fashioned way), and darker. It’s the Broadway I’ve always imagined and will always be drawn to. Graff’s dressing room has previously been inhabited by Christine Ebersole in War Paint, Samantha Barks in Pretty Woman and shared by Idina Menzel and Daphne Rubin-Vega in Rent. It’s a special leading lady’s space.

But the leading lady who currently is inhabiting this room didn’t foresee returning to Broadway so soon. Why did she stop?

“I just needed a break from ‘the life’,” says Graff. “I also fell in love with teaching. It became my passion and purpose.”

Graff became enamored with teaching. After being on the faculties of both NYU and Manhattan School of Music, this Tony Winner started Class With Miss Randy, and got her kicks inspiring performers of all ages to find their best in their performing. She’s magical on stage, but she’s also magical in the classroom – I know from experience. So what got her out of the classroom and back on stage? When Graff was in my studio getting some updated photos, I asked if we’d see her come back to Broadway. She said, no – but there is one project.

Can ya guess what it was?

“How do you turn down playing Billy Crystal's wife,” she continues. “That's a nice way to come back, don't ya think?

Since the beloved Tony Winner is returning home, she needs a home base. It’s not just her dressing room – it’s Elaine’s Tiki Bar. It’s a nod to her character in the show – a tie between both young Elaine and older Elaine.

According to Graff, “The flower decals are, in my mind, what young Elaine’s bedroom looked like in the 50’s and the Tiki Bar and Tahitian atmosphere is older Elaine’s fantasy. When I walk into my dressing room, I’m in another world.”

Graff’s process is physically simple: body stretches and a vocal warm up including some scales and breathing exercises using a straw. Then, into a stunning wig designed by Charles LaPointe and applied by Kyle Skillin and a beautiful costume by Paul Tazewell. It’s more her artistic preparation that is particular; spiritual. She surrounds herself with meaningful chackis, relics from moments past, gifts from the likes of Billy Crystal, and a daily reading of Haikus for Jews by David M. Bader.

“I read Haiku for Jews because they're funny and much of the comedy in our show is rooted in Jewish humor. I like to share them with the dressers on the floor. It's just a good  laugh before the show and it's hard to read just one!”

Amazing escape from his

But there’s also something that Graff surrounds herself with – photos.

“I love pictures,” says Graff, futzing with treasures on her shelf. “My husband, my  parents, my best friend, my grand aunt Miriam who perished in the Holocaust.  She was an actress in the Polish Theatre. My favorite quote about the actor by Arthur Miller, and a student of mine gifted me with three hand painted stones with the lessons I taught her written on them. The biggest lesson being, ‘nothing to prove, only to share’.”

And share she does. As a Jew, it’s often I find myself seeing stories of Jewish pain on stage. Rarely do I see a story that reflects the complications and nuances of a modern day Jewish family – until Mr. Saturday Night came. As hysterical and borscht-belty as it is, there is so much familiarity on stage, and it starts with her relationship with Mr. Crystal.

“Billy and I have been told that we look 100% married on stage,” says Graff. “The way we relate to each other emotionally and physically. The big moments and the tiny ones. It's real life. Not some idealized view of a long marriage. The duet we sing in the second act "My Wonderful Pain In The Ass" perfectly captures the beauty and complexity of a 45 year marriage. It's our "Sorry, Grateful" moment. Also, Billy and I really enjoy being on stage together and feel so safe with each other. I think that's the key to our believability as a 45 year old married couple.”

They call each other ‘Old Shoes’. For Crystal’s opening night present, he gave Graff exactly that – but I wasn’t allowed to photograph those because they’re “too special,” according to Graff.

And so to wrap it up, here is my special Jewish haiku for Mrs. Graff:

Pasted to her sole

Michael Kushner is NYC’s leading multi-hyphenate and the Executive Producer of the EMMY Nominated series Indoor Boys. In true multi-hyphenate form, Michael's book How to be a Multi-Hyphenate in the Theatre Business, published by Routledge Publishing is arriving fall of 2022. He served as the Director of Programming for The Green Room 42, providing the space with sold out programming post pandemic. He is the owner of Michael Kushner Photography and has been published in NYTimes, Vogue, Playbill, etc.