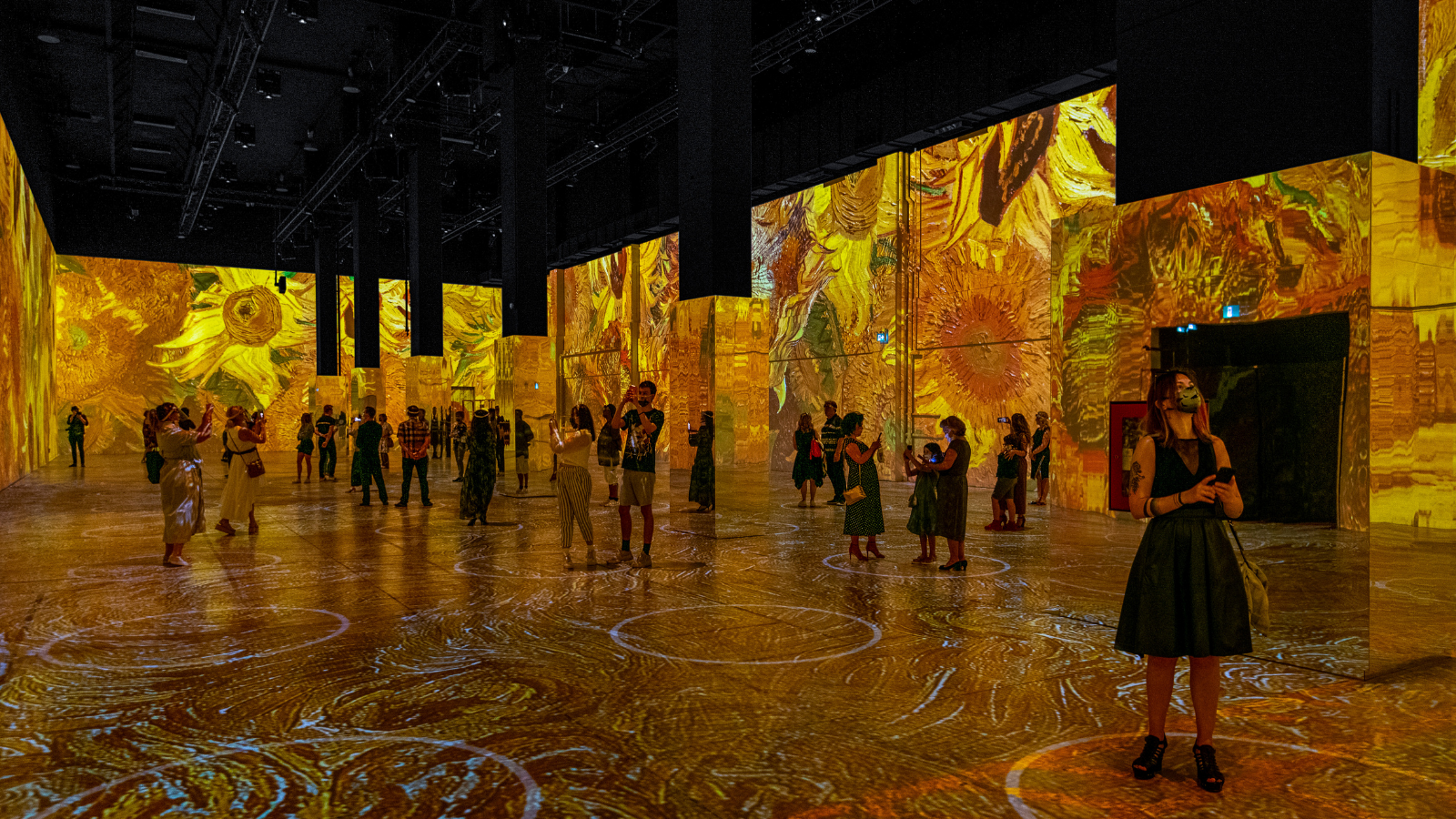 At the midpoint of another tumultuous year of the pandemic, many in our society have found solace in the art of Vincent Van Gogh, just as multiple generations have before us. Known for his struggles with loneliness and depression, Van Gogh’s creations may resonate now more than ever before. As New York City enters its long anticipated reopening phase, it seems fitting that the first large-scale art attraction to welcome visitors is the Immersive Van Gogh Exhibit at Pier 36 in Manhattan.

The original exhibit, which has travelled across Northern America with installations in major cities such as Toronto, Los Angeles, and Orlando, will return to its roots in NYC to host its largest exhibit yet - both in size and in scenic design. Well-known theatre designer David Korins (Hamilton, Dear Evan Hansen) was enlisted as the creative director of the redesigned experience. Under Korins’ direction, the Immersive Van Gogh Exhibit will now feature interactive multimedia that will further immerse visitors into the art of Van Gogh, just as Korin’s other design ventures have embraced technology to enhance realism, such as the iconic screen projections seen in Dear Evan Hansen.

Although the exhibit will not open to the public until June 10th, Theatrely was invited to a “hard hat” opening, where press were handed their own hand-painted protective gear to view select sections of the exhibit, some of which were still under construction. The blank-walled rooms where projections dance across the dimensions were fully set-up, and a 10 minute display was shown of Van Gogh’s art, accompanied by instrumental music. The full show is one hour in length. In the middle of the room were mirrored glass sculptures that reflected the projections from all angles, adding contrast and movement throughout the room. The paintings came to life through the projections, with many of the paint strokes that were previously fixed in place now fluid from the floor to the ceiling of the large space. As the stars of The Starry Night rotated across the walls, they bounced off of the mirrors in a twinkling dance. The waterfront featured in Van Gogh’s earlier painting Starry Night Over the Rhône covered the bottom half of the walls and the floor, the blue ripples ebbing and flowing across the glass structures just as the French river once did before Van Gogh’s eyes as he painted it.

The visual dynamics and motions of Van Gogh’s paintings allow visitors to see these landscapes and images just as Van Gogh did when painting them. This experience alone is worth a trip. But now, with the addition of Korins’ interactive multimedia, visitors can not only appreciate Van Gogh as an artist, but engage with him as a person.

A sculpture titled “Letters from Vincent” will be one of the focal points of the lobby: a supersize metal quill with a flurry of floating letters surrounding it. At the base of this sculpture are four screens where visitors can write their own letter to the artist, and they will be sent back a personal response in Van Gogh’s handwriting, unique to the conversation started by the visitor. This was possible due to the thousands of letters Van Gogh sent to his brother, which have been scanned and added to a database to analyze and reproduce his personal script. A “Pocket Gallery” will adorn a nearby wall, and visitors can use their phone camera to enter an augmented reality of Van Gogh’s vision in each of the paintings hung.

In response to Theatrely, Korins described how his background in theatre influenced his innovation for the exhibit. “I really do think that the design process is the same...in the beginning, I co-conceive how a show is going to be created, and then make it a physical environment, but here, I kind of pour gasoline on that fire, and get to affect people on a much deeper level,” he says. The addition of Korins’ interactive technology is one of the many things that sets the NYC installation of the beloved exhibit apart from its predecessors, but the timing is also a contributing element. As our society, and especially as New York, begins to step out of a period of complete isolation and devastation, the Immersive Van Gogh Exhibit emerges as a hallmark of how Van Gogh’s art prevails in this particular age. “As we creep out of our little apartments, I feel like he's the perfect artist for the perfect moment...there's so much of his work that is contemplative, and frenetic, and filled with energy; but so much that is buoyant and joyous,” says Korins. With widespread optimism for an impending social boom and a resurgence of the “roaring 20’s” on the tail end of historic tragedy, both the despair and the delight of Van Gogh’s art holds space for us to process all that has happened, and all that we can hope for.