Virtual UNDER THE RADAR FESTIVAL Kicks Off Today 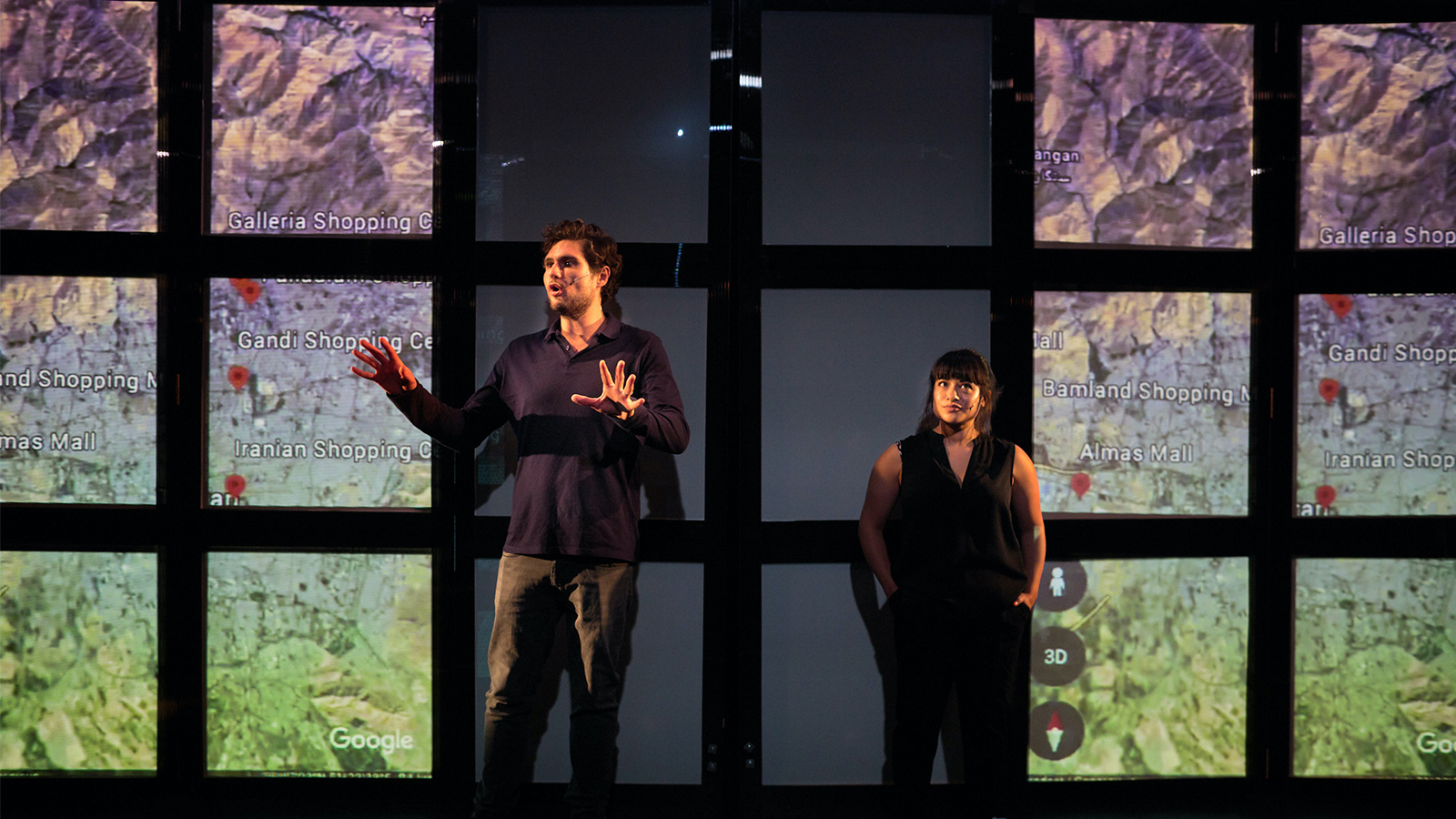 A scene from Rich Kids: A History of Shopping Malls in Tehran , running January 7 - 10, 14 - 17 as part of The Public Theater’s 17 th Annual Under the Radar Festival. Photo Credit: Peter Dibdin
By
Zack Reiser
&
on
Category:
News

The Public Theater (Artistic Director, Oskar Eustis; Executive Director, Patrick Willingham) begins performances for the 17th annual UNDER THE RADAR FESTIVAL, today Wednesday, January 6. This popular and highly anticipated festival of The Public’s winter season includes artists from across the U.S. and around the world, including Chile, Iran, and the U.K. Curated by UTR Festival Director Mark Russell, this year’s free UNDER THE RADAR FESTIVAL will feature a robust line-up of digital livestream and streaming on-demand performances, as well as the return of the Under the Radar Symposium: A Creative Summit.

The festival also includes the return of the Under the Radar Symposium: A Creative Summit on January 7 at 10:00 a.m. EST, a half-day event featuring conversations and panels about the field at this moment in time, as well as a keynote by spoken-word poet, educator, and performerMarc Bamuthi Joseph, who serves as the Vice President and Artistic Director of Social Impact at the John F. Kennedy Center for the Performing Arts.

The Public Theater recently announced the 2020-2022 Devised Theater Working Group’s cohort members, which include Savon Bartley, Nile Harris, Miranda Haymon, Eric Lockley, Raelle Myrick-Hodges, Mia Rovegno, Justin Elizabeth Sayre, and Mariana Valencia. The Devised Theater Working Group (DTWG) is an artist resource group designed for live arts-makers of all disciplines. Formed as a complementary program to the Under the Radar Festival in 2014, DTWG creates an infrastructure to support collaborative collectives and other untraditional originators as they forge new theater. By offering the dramaturgical, technical, artistic, and administrative resources of The Public Theater, DTWG operates as part of Under the Radar Festival, where unique modes of creation and independent theater-making are elevated annually. This year's cohort will be The Public’s first two-year cohort, and the group will collaborate on an INCOMING! video compilation made up of their individual artistic expressions, which will premiere in January’s festival.

The Public Theater, along with the Cultural Services of the French Embassy in the United States, will co-present an online panel on January 9, International Relations: The Day After Tomorrow. After almost a year of standstill on theater stages across the world in Europe, Africa, Asia, Oceania/Australia, and the Americas, the pandemic has brought not just chaos - but also aspiration. Together, theater makers and artists re-imagine the challenges of the future and brighter days. This online panel brings together: Hortense Archambault, Director, and Frank Piquard, Director of Productions, both from MC93 in Bobigny, France; Aguibou Bougobali Sanou, performance artist, choreographer, and director of dance festivals from Burkina Faso; and Meiyin Wang, the Producing Director for the Perelman Performing Arts Center, New York. These panelists will share their visions for the future. Lili Chopra, Artistic Director of Lower Manhattan Cultural Council in New York, will moderate the 70-minute panel that includes a Q&A.

Over the last 17 years, The Public’s UNDER THE RADAR FESTIVAL has grown into a landmark of the New York City theater season and is a vital part of The Public's mission, providing a high-visibility platform to support artists from diverse backgrounds who are redefining the act of making theater. Widely recognized as a premier launching pad for new and cutting-edge performance from the U.S. and abroad, UTR has presented works by such respected artists as Elevator Repair Service, Nature Theater of Oklahoma, Tania El Khoury, Belarus Free Theatre, Guillermo Calderón, Toshi Reagon, Taylor Mac, and Daniel Fish. These artists provide a snapshot of contemporary theater: richly distinct in terms of perspectives, aesthetics, and social practice, and pointing to the future of the art form.

With theaters closed and in-person programming on pause, The Public Theater continues to navigate the immense challenges created by the pandemic, including an operating budget that has contracted significantly, substantial furloughs among full-time staff, and a lack of employment opportunities to offer the freelance artistic community. The Public continues to rely on its community of loyal supporters who stand alongside the organization as it upholds its mission during this uncertain time. With the generous contributions of supporters as the only current source of revenue, The Public continues to reimagine theater for the digital space, support a range of artistic voices in making new work, and share it with a growing global audience. Become a Partner or a Supporter of The Public Theater today at www.publictheater.org.

The Public Theater strives to make its performances, digital content, and facilities accessible to all patrons and visitors. For additional information or if you have questions, need assistance, or an accommodation to access our digital content, please email accessibility@publictheater.org.

Pick up the phone. Someone is on the line. You don’t know their name, and you still won’t when the hour is over, but through this exchange – as you follow a thread of automated prompts – a portrait of your partner will emerge through fleeting moments of exposure. A THOUSAND WAYS “takes a simple premise and turns it into magic” (The New Yorker).

Under the Radar is thrilled to present A THOUSAND WAYS (PART ONE): A PHONE CALL, the first of an eventual three-part series by Obie Award-winning theatermakers, 600 HIGHWAYMEN, known for exhilarating performances that challenge the very definition of theater.

Taking place around the world, A THOUSAND WAYS explores the line between strangeness and kinship, distance and proximity, and how the most intimate assembly can become profoundly radical.

Inspired by the past year CAPSULE is a kaleidoscopic reflection on isolation and longing, about breaking apart and breaking free and the impossible nature of connection. Through original text and music, Whitney White and Peter Mark Kendall grapple with race, the medium of film, and being caught up in the maelstrom of 2020. In a society that insists on blunt, binary responses to complex questions, CAPSULE is a clarion call in favor of curiosity and abstraction.

Created by Teatro Anónimo and directed by Trinidad González, ESPÍRITU is a journey through diverse stories that happen during the night of an unknown city, that involve anonymous individuals marked by the spiritual crisis unleashed by the wild consumerism of the times and the exploitation of the neoliberal model in people’s consciousness, through power and the manipulation of their desires. The lack of answers that transcend money and the offer of material possessions will lead these characters to want to find the hidden devil that inhabits the city, and to catch it in a bottle.

The global gap between rich and poor has never been greater. As the world decays, the spawn of the powerful dance like everyone is watching.

Winner of the 2019 Scotsman Fringe First Award, RICH KIDS: A HISTORY OF SHOPPING MALLS IN TEHRAN is a darkly comedic, urgent new play about entitlement, consumption and digital technology, that explores the ubiquitous feeling that our societies are falling apart.

Combining digital theater and a live Instagram feed, it is the sequel to the award-winning The Believers Are But Brothers, and the second part of a trilogy of plays from Javaad Alipoor about how digital technology, resentment and fracturing identities are changing the world.

Born to a Muslim father and a Christian mother against a backdrop of sectarian violence, Inua Ellams left Nigeria for England in 1996 aged 12, moved to Ireland for three years, before returning to London. An award-winning poet, performer, playwright, graphic artist, and designer, Inua returns to the theme of migration in his work, exploring his own life experiences and wider global and political questions. BORDERS & CROSSINGS is an opportunity to get to know Inua and hear some of his poetic and dramatic work on this theme, live and online from London.

Chef Nargis invites you to her virtual cooking class, and if you both do your jobs just right, you'll have more to look forward to than an aromatic dinner. Help prevent a perpetually impending war from the safety of your home! DISCLAIMER examines identity and fear, the stakes of cultural (mis)representation, the quest for togetherness, and the seductiveness of a classic whodunnit.

This year, The PubIic Theater’s Devised Theater Working Group was challenged to create individual digital expressions for a group compilation video: INCOMING! Immediate, made for the here and now, this 30-minute video will show short pieces from all eight members of this cohort.

RSVP for free festival events through The Public’s website to receive email updates and reminders. Booking for timed ticketed events will be available at a later date. For the full festival calendar with performance times, visit publictheater.org.

UNDER THE RADAR SYMPOSIUM: A CREATIVE SUMMIT: JANUARY 7, 2021

The Under the Radar Symposium: A Creative Summit is a half-day event on January 7, featuring conversations and panels about the field at this moment in time. Artists and arts leaders from around the globe will participate in a virtual summit. Digital attendance at the Symposium is open to all those who would like to participate.  For more information on the UTR Symposium, please email utrsymposium@publictheater.org.