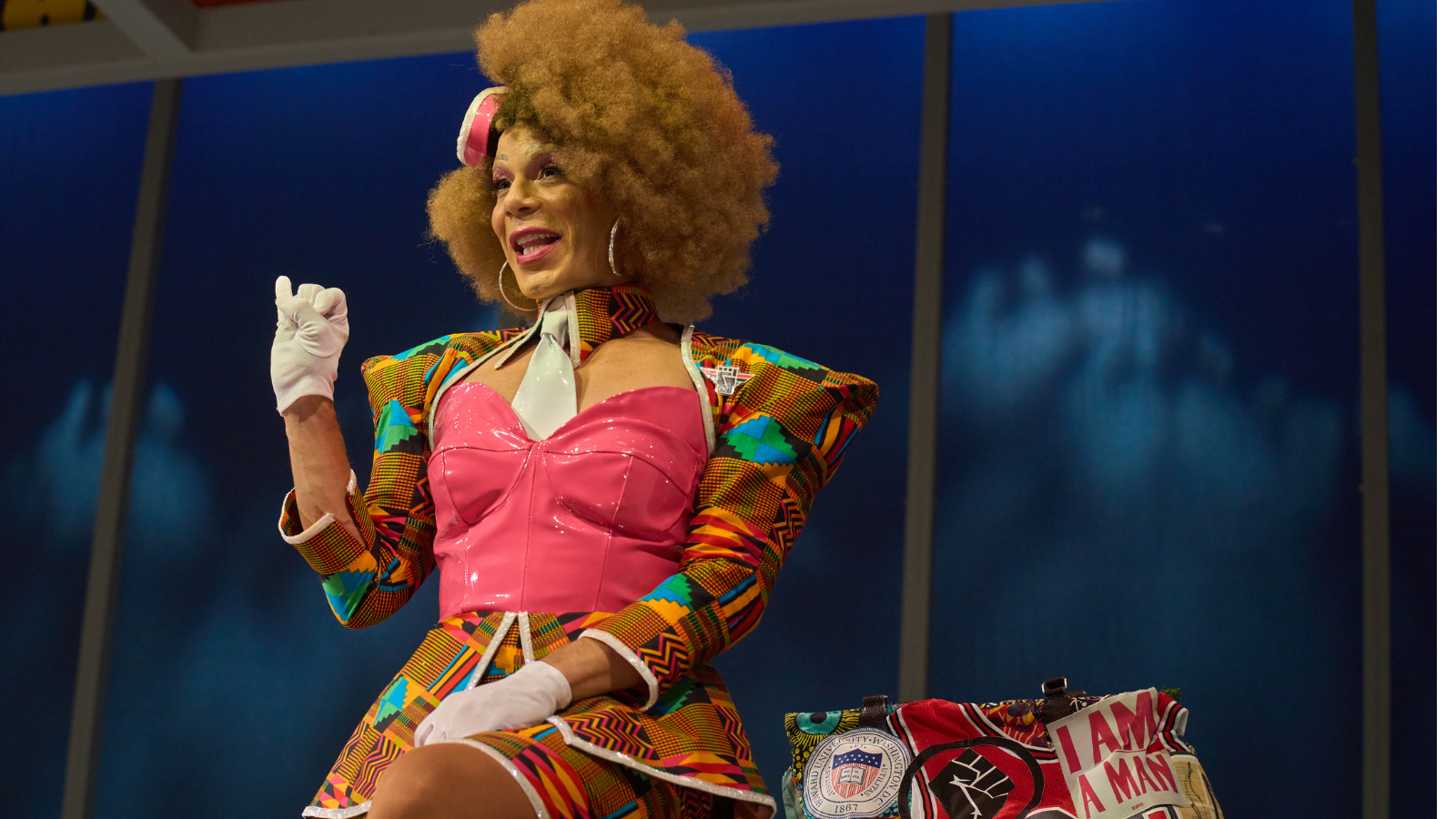 It’s difficult for a show to take on the weight of 400 years of history and also be laugh-out-loud funny, but that’s exactly what playwright Jordan E. Cooper accomplishes with Ain’t No Mo. After an acclaimed 2019 run at The Public Theatre, the play is currently having its regional theatre debut at Washington D.C.’s Woolly Mammoth Theatre. A Broadway production of the show, featuring Cooper as a performer, is scheduled for later this fall. If this D.C. production is any indication, Ain’t No Mo ought to have a successful life on Broadway and beyond. Cooper’s play is the rare satirical work that feels as affirming as it does biting, as joyful as it is discomforting.

The show opens with an ingenious sequence, as Black churchgoers wheel out a coffin onto the stage, and Pastor Freeman (Breonn Arzell) delivers an operatic sermon. They’re not laying to rest a person, but an entire way of life: they’re celebrating the death of Brother ‘Righttocomplain’ on the eve of Barack Obama’s 2008 election. “After today, we will have no reason to ever walk around with the weight of our ancestor’s tears guiding our faces to the ground,” Freeman jubilantly tells the audience. “For as of now, the leader of this country is…black…Light skinned to be exact.”

All of the strengths of Cooper as a playwright are present from the beginning: his skill at laying on thick dramatic irony without sacrificing sincerity, his attunement to the metaphors inherent in AAVE, and his ability to offer moments of communal recognition for Black audience members while also challenging them.

What makes Ain’t No Mo’ even more innovative is its refusal to stay within a successfully established scene; the show is composed of nine vignettes, nearly all with different scenarios and characters. Just as you’re settling into the groove of a scene, Cooper yanks you away, forcing you to travel to a surprising destination each time.

Travel—the abrupt, life-changing, disorienting kind—is what connects each of the vignettes. In the world of Ain’t No Mo’, sometime after the election of Obama, African American Airlines was established to permanently move all Black Americans to Africa for free. It’s a clever conceit that recalls 1800’s Pan-Africanist activists like Martin Delany, who wanted to create a separatist Black nation within Africa. It’s a conceit that also gestures towards Black alternate histories, speculative fiction, and Afro-futurist utopias—always in an uproarious fashion.

Audiences are in good hands with the instantly iconic character Peaches, the flight agent for the last plane to Africa (it’s the role Cooper will play on Broadway, played here memorably by Jon Hudson Odom). A drag queen outfitted in a ridiculous yet fabulous kente cloth getup, Peaches is the sole character to appear in multiple scenes, and serves as the emcee for the night.

Odom walks the fine line between dead seriousness and winking towards the audience so well. When Peaches warns of the dangers of staying in America (“you only got two choices for guaranteed housing and that’s either a cell or a coffin”), Odom lets us feel the corrosive anxiety pulsing beneath the show’s kiki. Of course, he easily gets the audience laughing again with a line like, “They got Lace-fronts in Africa too, bitch, just get here!”

The rest of the show’s sketches range wildly in tone and genre. Many are parodies of well-worn targets (The Real Housewives of Atlanta, bougie Black families, Rachel Dolezal), but here they’re executed with piercing clarity. Ain’t No Mo’ is part of a new wave of Black sketch comedy, including Key and Peele and A Black Lady Sketch Show, where formal experimentation is part of their comedy’s DNA. There’s always a twist, dangerous or silly, in Ain’t No Mo’s short scenes. This is true even when Cooper dives into more directly dramatic material: scenes exploring violence and incarceration are still punctuated with laughs.

‍Ain’t No Mo’s chorus, consisting of five Black actors, ably alternates wigs, costumes, and even accents between scenes. It would be so easy for these chorus members to dip into caricature, yet each character they play feels specific and aware of the performances of everyday life.

Standouts from this group include Brandi Porter playing a layered reality TV show personality, and Lanisa Frederick as an embodiment of Blackness itself. There’s also Shannon Dorsey, a Woolly Mammoth Company member who’s quickly becoming my favorite performer to see in D.C.. Her scene, a timely examination of a woman Trisha considering a medical procedure, was the most haunting of the night.

Your mileage may vary on which vignette is your most or least favorite. For me, a few sketches dragged on a little too far beyond their twists, rendering them repetitive. I even wondered what would happen if there was slightly more connectivity between the episodes, or if they all tied together more cohesively in the end. Still, Cooper’s playwriting structure is constantly surprising, each sketch pushing the play into unexpected directions.

Throughout the night, I kept questioning the meaning of the play’s title. What exactly is there no more of, and is this a good or bad thing? The “no mo’” phrase keeps popping up in different sketches. Pastor Freeman uses the phrase to begin a litany of oppressions Black Americans may no longer face under Obama’s watch, oppressions we know are still present. Peaches pointedly tells her passengers that “Obama ain’t president no mo.” Trisha even uses the phrase to exert control over her own body, telling her partner “It ain’t yo story to tell no more. It’s over.” Maybe what truly unites Ain’t No Mo’s sketches is the grief Black Americans feel admitting there’s no more reforming America, no more forgiveness left to give, no more hopeful story to tell.

Those boarding African American Airlines in Ain’t No Mo’ might be searching for liberation, or might be running away from the past. They also might just be searching for change—the simple, universal need that Obama campaigned on in 2008, a need that failed to materialize for too many Black Americans. Through its wild imagination, clever staging, and raw honesty, Ain’t No Mo demonstrates the radicalism needed to enact change. Sometimes you need a drag queen hell-bent on getting her community together in order to get anything done.

‍Ain’t No Mo’ is in performance at Washington, D.C.’s Woolly Mammoth Theatre Company through October 9. For tickets and more information, visit here.