WUTHERING HEIGHTS Hits a Lot of Notes, Not Necessarily The Right Ones – REVIEW 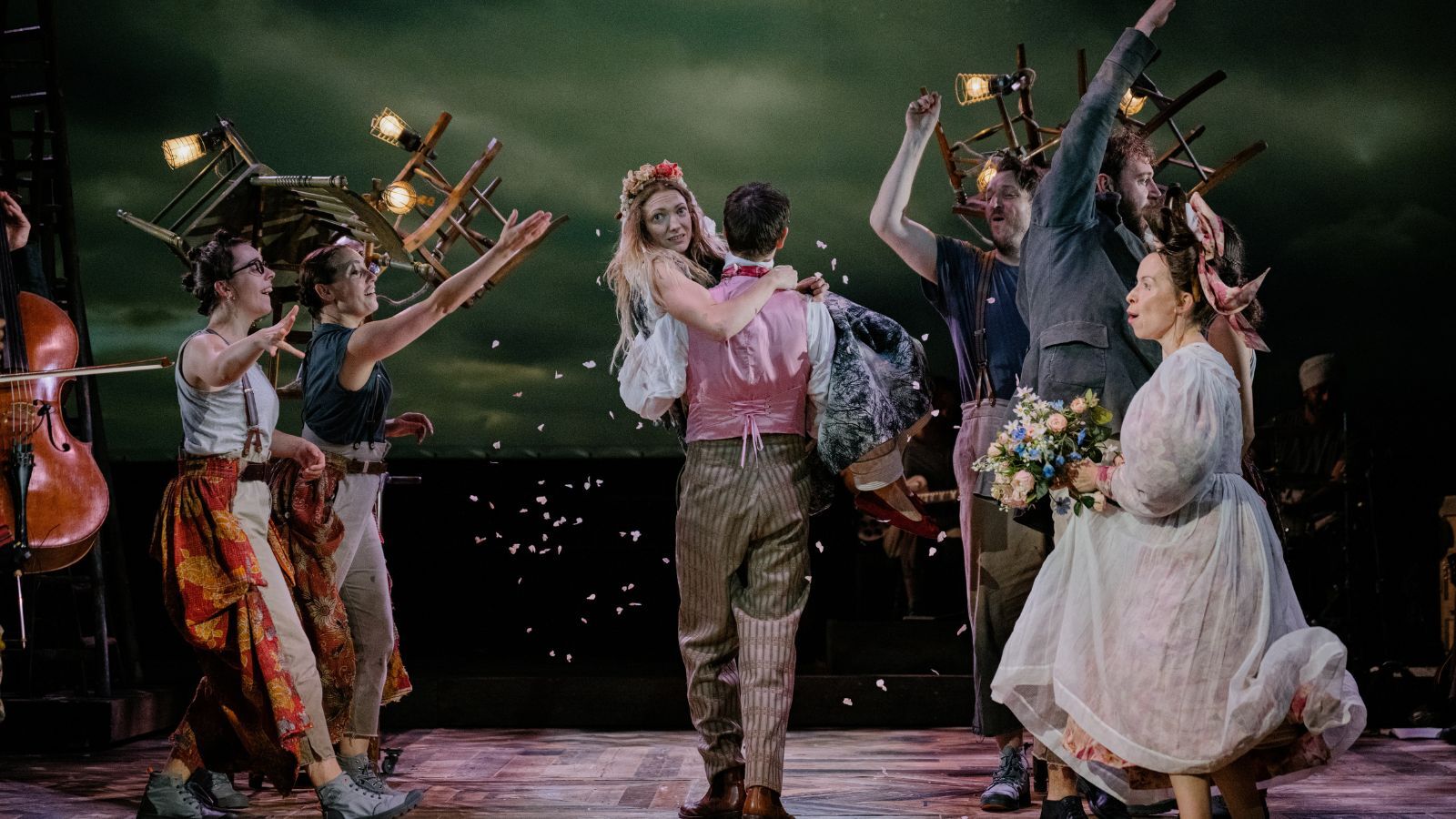 I’d like to think I’m a fan of the adaptation. Treading the space between too similar and too original, an adaptation is a hard thing to do. I heard about Emma Rice’s Wuthering Heights, now playing at St. Ann’s Warehouse, and was understandably excited. Give me the 19th Century, but today. Give me more agency for characters formerly ignored. PLEASE give me neon lighting. While the production was inarguably an adaptation with potential, the results were underbaked.

The production comes from Wise Children with the National Theatre, the former created and led by Emma Rice, who also adapted and directed the production. In its American premiere, Wuthering Heights has moved into St. Ann’s Warehouse with a DIY concept. There’s a relatively bare platform, a perimeter of chairs, along with an extensive collection of small set additions, props, and costumes. It has traveling show energy and festival aesthetics, but suffers from a case of taking itself incredibly seriously.

Advertised with a rock-musical concept, this production is simply not that. There are few songs, all of which leave something to be desired. With only a handful of truly music-forward moments, the middle ground is a repetitive refrain sung (and danced) by whichever ensemble members (“The Moors”) were not actively playing a character. To be fair, the rockstar mic-drop moment advertised was a great moment.

The source text (Emily Brontë if you slept on it in high school English), while convoluted and archaic, was not the problem; the issue came in the indulgent adaptation. Somehow a troupe of fast-moving actors with innovative staging were asked to maintain their sense of whimsy for a near-three hour dulge. Commitments made (performers covering multiple characters) were sacrificed (why were there puppets in one scene?) and I wondered: what is the goal here if not to be different for different’s sake? As the scenes dragged on, energy shifts became noticeable; props tossed offstage without much aim, actors physically sliding into a new scene and completely overshooting the action, even a pair laughing and exchanging glances in the completely unmasked wings of the stage. Clearly this company is capable of comedy and playfulness and I wish I could have seen more of that! It’s a shame the adaptation had such a tight grip on choreographic chaos. Instead of feeling light, fun, modern, we were left with lovely seeming people ticking off boxes on a checklist of how to make your adaptation edgy.

The production offers a standout performance from Liam Tamne (Heathcliff) who balances the long-spanning timeline and character development with ease. Costumes (Vicki Mortimer, also set designer) assist with the transformations, complete with a few “oohs” and “ahhs” when introduced as the well-dressed and powerful Heathcliff at the midway point. Other highlights include the seamlessly run backstage efforts. The Warehouse used minimal curtains and drapes offstage, so audience members could watch a full show from the collective of stage hands operating through each costume change/time shift/new chair modification.

With the best intentions and an open mind, this adaptation was disappointing. The best way for this production to proceed would be trimming to a clean 75 to 90-minute runtime and aligning the production’s creative purpose: exciting rock musical or dense educational retelling.