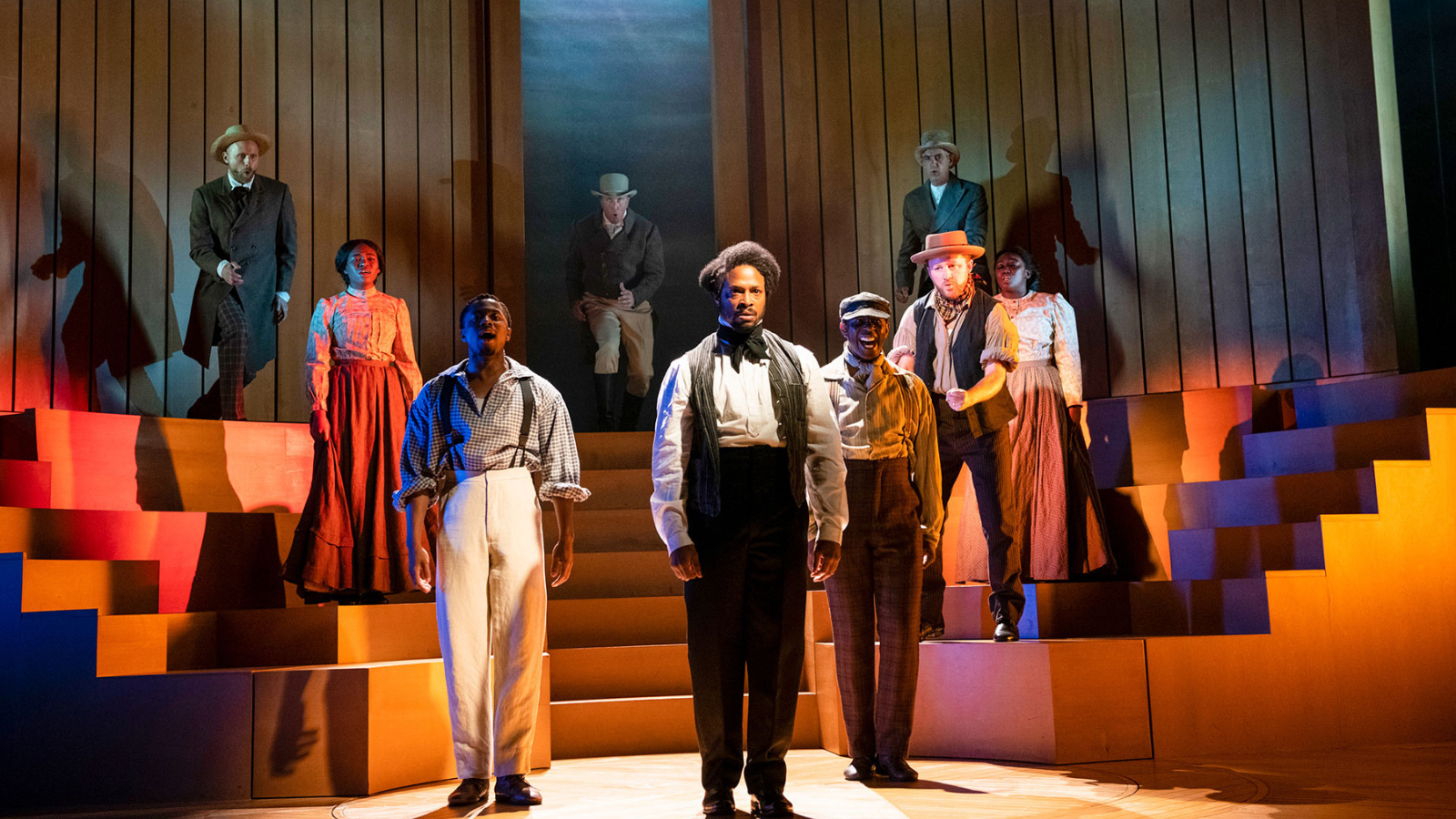 When abolitionist Frederick Douglass delivered his 1852 speech “What to the Slave is the Fourth of July,” it was a multilayered critique. Douglass wasn’t only excoriating the idea of independence. He was also criticizing his audience, the Rochester Ladies’ Anti-Slavery Society, by holding them accountable to America’s horrors, too. “O! had I the ability, and could I reach the nation’s ear, I would today pour out a fiery stream of biting ridicule, blasting reproach, withering sarcasm, and stern rebuke,” Douglass said. “For it is not light that is needed, but fire; it is not the gentle shower, but thunder.”

These lines are now spoken in American Prophet: Frederick Douglass in His Own Words, a new musical playing at Washington, D.C.’s Arena Stage. Acting as Douglass, Cornelius Smith Jr. imparts these lines midway through the first act with a moving fervor. However, Smith simply walks onstage and delivers the speech, with no framing onstage or in the script. You might say Douglass’ words are strong enough to stand on their own. You might also say that American Prophet’s audience was left mostly off the hook from Douglass’ “biting ridicule” and “blasting reproach.”

Watching Smith deliver excerpts of “What to the Slave is the Fourth of July”—in isolation, drained historical context—I finally understood why American Prophet just wasn’t clicking for me. The musical, while made with the best intentions, simply doesn’t go far enough to get under its audience’s skin as Douglass’ actual speeches do.

Frederick Douglass’ life was full of twists and turns, and American Prophet wisely presents them in chronological order. We first encounter our protagonist as the child Frederick Bailey, and then follow him through a violent adolescence in slavery. Bailey eventually lands in Baltimore, where he meets Anna Murray (Kristolyn Lloyd), a free Black woman who quickly falls for him.

After they escape to New York and change their last name to Douglass, Frederick and Anna join forces to advocate for the abolition of slavery. Along the way, they encounter allies with differing political ideologies: the “don’t-bite-the-hand” admonisher William Lloyd Garrison (Thomas Adrian Simpson), the radical John Brown (Chris Roberts), and even President Abraham Lincoln (Simpson again).

‍American Prophet is primarily a collaboration between two men: Charles Randolph-Wright, who co-wrote the book and directed this production, and Marcus Hummon, who co-wrote the book and independently wrote music and lyrics. Like his work directing Broadway’s recent revival of Trouble in Mind, Randolph-Wright brings a pointed “now more than ever” message to this show. Randolph-Wright knows Douglass’ critiques of America remain frighteningly relevant, and he gives Douglass’ words plenty of room to breathe on stage.

What deflates the show’s momentum is Hummon’s music. Nearly every song of American Prophet follows a gospel-country formula, to the show’s detriment. While American Prophet’s plot vacillates between highs and lows, the songs plateau onto a calm neutral where everything sounds affirming and inspirational. The score is almost entirely composed of mid-tempo ballads, so the music diffuses over the audience, smooth and limpid but disengaging. The lyrics don’t fare better, as characters rarely express themselves outside of platitudes or political messages repeated so often they sound like slogans. It’s telling that the show’s most dramatic moments don’t occur in song at all.

Although American Prophet’s tranquil score doesn’t allow for much action—characters mostly stand on Arnulfo Maldonado’s amphitheater-like set and stare stoically—the actors do their best to make their characters engaging. Kristolyn Lloyd continues to do the most when given the least. Just as she brought spunk to Dear Evan Hansen’s underwritten character Alana, Lloyd conjures similar magic for Anna Douglass, a character who doesn’t have much to do besides deliver torch songs and comment on her own erasure. Still, Lloyd wrings beauty and truth from the historical scraps assembled for her. A performer this talented deserves her own starring vehicle, one not burdened by her character’s relationship with a man.

As Frederick Douglass, Cornelius Smith Jr. is given far more to do. He commands the stage, bringing a poised grace and a stately presence to Douglass’s speeches. I wonder, though, why Douglass’ ferocity seemed tempered even when not giving public addresses. In American Prophet, Frederick Douglass is represented as so monumental that his character becomes like a statue: impenetrable, unwavering, hardly flawed at all.

Throughout the show, I kept questioning what parts of Douglass’ life the audience never gets to see. We never see Douglass truly break down in anguish. We barely see Douglass writing his speeches. All we’re left with is Douglass as a public figure, not the real man working tirelessly to maintain that image.

Although it might seem blasphemous at first, the best theatrical endeavors often humanize revered historical figures. I’ll never forget the opening of Katori Hall’s The Mountaintop, which stages another American prophet (Dr. Martin Luther King, Jr.) drafting a speech while going to the bathroom. I’ll also never forget Lin-Manuel Miranda’s Hamilton, despite the never-ending discourse around it, because of the musical’s frank staging of a Founding Father’s flaws.

Hall and Miranda bring a behind-the-curtain fearlessness to biographical theatre; no matter how you feel about their shows, they’re certainly memorable. American Prophet lacks Hall and Miranda’s confidence. Randolph-Wright and Hummon stick so closely to Douglass’s words that they lose sight of an engaging story. Their approach might’ve worked in a non-musical show, but musical theatre requires imaginative characters (people are singing their feelings, after all!), and American Prophet struggles to plunge into the depths of Douglass’ mind.

‍American Prophet disappoints more than it angers. This is a show that follows a Black historical figure, and seeks to honor his contributions to America; it’s a story that deserves to be told, just maybe not in this way. American Prophet wants its audience to feel Douglass’ fiery spirit, to press our faces to the flames. The best this musical can muster is a muted, dignified glow.

‍American Prophet is in performance at Washington, D.C.’s Arena Stage through August 28. For tickets and more information, visit here.