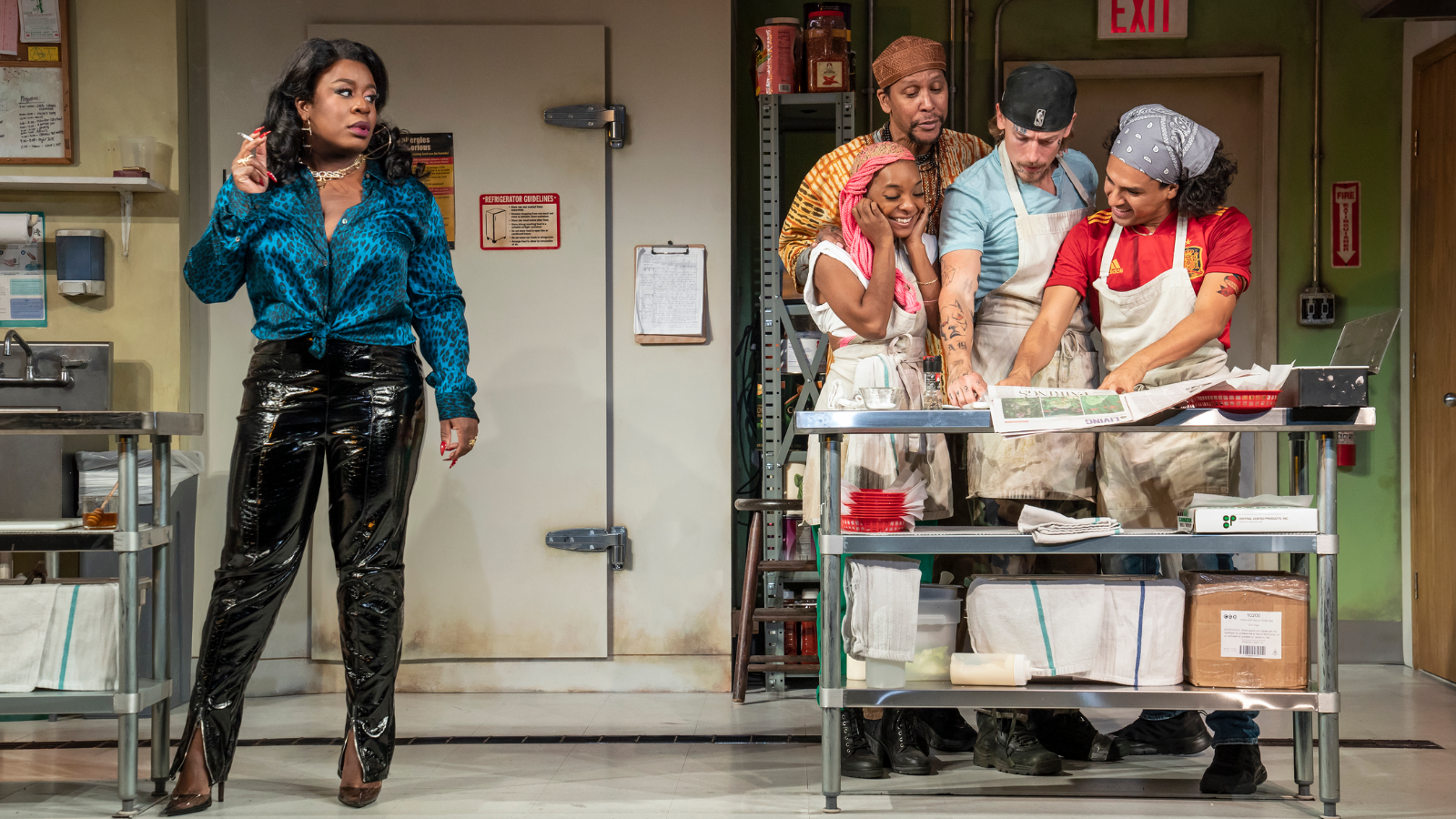 A boss who spends their life berating their employees instead of tending to the business is one with something to hide, and not much to show for it. In Clyde’s, a new play by Lynn Nottage which just opened at the Hayes Theater, this infernal chief is played with irresistible gusto by Uzo Aduba. With sketchy gambling ties and a passion for making her employees’ life hell, she runs her titular roadside sandwich shop with a punishing fist, always ready to swing should any backtalk arise. This funny, poignant production by 2nd Stage Theater matches her commanding wit, even if Aduba’s magnetic performance takes a kitchen knife to her vaguely undercooked character.

Swiftly directed by Kate Whoriskey with a keen eye for pacing, effective for the play’s initially episodic structure, it follows the kitchen staff at a greasy spoon off a Pennsylvania highway as they try to make their way through the workday without angering their mercurial boss. Though they’ve landed at the dingy restaurant out of dire necessity—they have all, Clyde included, been previously incarcerated—the spark has not been entirely erased from their eyes. Spiritually led by the noble Montrellous (Ron Cephas Jones, sweet and smooth-voiced), they speak of their bottom-of-the-barrel ingredients as if they were holy tools; the magic beans which might one day lead to a peaceful dignity.

Jason (Reza Salazar, pulsating), who demands to be called a sous chef, and Tish (Kara Young) hold onto this ambition, though a blossoming flirtation and the ever-present danger of relapsing into old behaviors threaten their careful balance. The lights (by Christopher Akerlind) don’t dim in reverential attention when they dream up recipes, as they do for the optimistic Montrellous, but they are comfortable enough in their routine. Newcomer Jason (Edmund Donovan, a low-key gem) has the hardest time envisioning this future, having just left “the inside” and struggling to keep his cool against Clyde’s fiery, combative demeanor. “The world is mean, I’m just in it,” she tells her employees, and that seems to be the end of that.

Aduba, looking snatched in Jennifer Moeller’s perfect costumes—first appears in a tight denim jumpsuit and leopard boots—and wearing Cookie Jordan’s hair and wig designs like a parade of crowns, is excellent in a role that is slightly underwritten. Nottage seems interested in the tension between being in-charge and being plain rude, especially as perceived in women, but indulges Clyde’s penchant for insults too much to remember to balance her out with much motivation. Perhaps Aduba’s exacting performance, in which the venom pours deliciously from her lips, hints at a richer character than Nottage intended, but the result leaves a major gap where there should be a knowing reason.
Tish is played by Young with a mousy cartoonishness that hides a history of hurt. Young, who excelled in MCC Theater’s All The Natalie Portmans (also directed by Whoriskey) and Atlantic’s Halfway Bitches Go Straight To Heaven right before the pandemic, is an exciting young talent to watch. In these three plays, each about socially compromised people dreaming of a better life, Young finds the manic desperation behind each of her characters’ laughs, crafting increasing tensions that are incredibly compelling.

Justin Hicks does well with his original music, but is outshined by the interstitial use of Cardi B’s “Up” (sound design by Justin Ellington)—a momentous appearance of which Miss B should be proud. The simple kitchen set, designed by Takeshi Kata, first seen through what appears to be a takeout window, is livened up with occasional pyrotechnics, and never feels boring under Whoriskey’s brisk direction.

Perhaps Aduba’s winning performance is too big for the role, or perhaps an affecting farce about workplace harassment post-The Office necessitates somewhat of an explanation behind the Human Resources nightmare. If this engaging production leaves out a few garnishes, it still serves up a finger-licking good time with a few stirring insights on the side.

Clyde's is now in performance at the Hayes Theatre on 44th Street in New York City. For tickets and more information, visit here.