COVID-19 Surge Provides Upsides and Downers On Broadway and Beyond 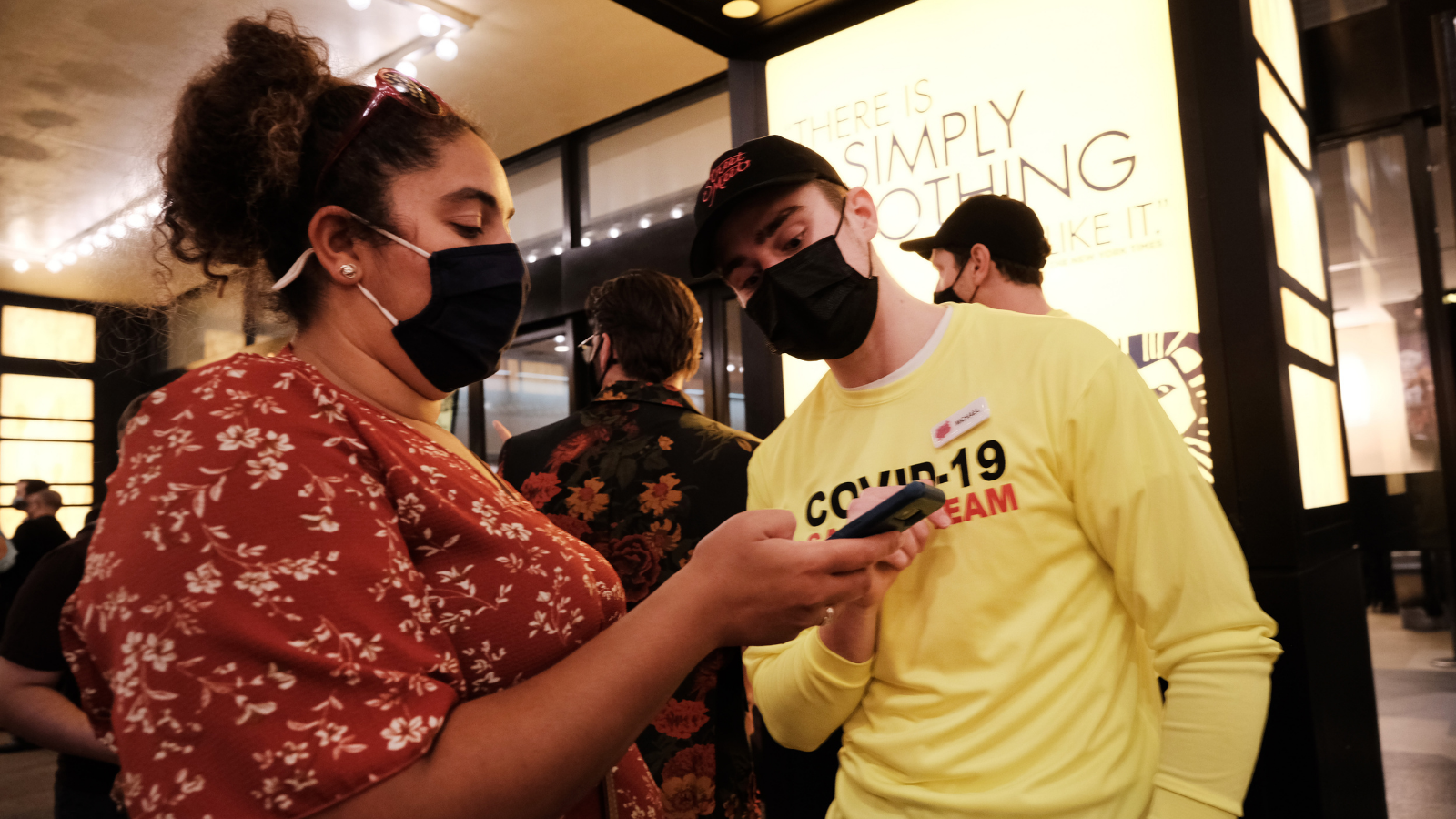 Vaccine Checks are still in place at all Broadway shows | Photo: Spencer Platt/Getty

It’s happening again. COVID-19 is rearing its ugly head on Broadway, but this time, the motto seems to be “keep calm and carry on.” It’s easy to get panicky, but we’ve been here before—twice, in fact. Ask anyone in the theatre industry and they’ll invoke PTSD-inducing flashbacks to an 18-month long shutdown and the Omicron interruptions in the fall of 2021.

There are a number of measures the industry didn’t have at the start of this two years ago, which means the show can go on even when the stars test positive for the latest variant of the coronavirus. If not, ticketholders will get a refund, which I highly suggest you take to the nearest box office of another show (there’s nearly 30 options on Broadway right now).

Still, we need to remain on guard. “These kinds of disruptions will continue to happen during surges, but we may increasingly feel blindsided by them, and be less prepared as a result,” says Denis Nash, Distinguished Professor of Epidemiology at the CUNY Graduate School of Public Health. “This is because of decreases in testing or exclusive at-home testing, hobbling surveillance systems that would normally detect a surge early. It is not unexpected that there is more COVID going around now because we have opened up a lot more.”

Below are a few trends I’ve noticed in the past few weeks that are worth keeping an eye on as we move closer to the end of the 2021–2022 season and—fingers crossed—awards season.

If you weren’t one of the lucky few to catch Nikki Renée Daniels as Bobbie in Company last weekend, you still can April 8! While sending lots of “get better soon!”s to Katrina Lenk, fans exploded with joy upon discovering Nikki would go on as the understudy. She became the first Black Bobbie on Broadway, and brought the house down during “Being Alive.”

In a similar vein, Tony winner Michael McGrath is now subbing in for Matthew Broderick at Plaza Suite. While part of the draw for the revival of Neil Simon’s comedy is seeing a real-life married couple, Sarah Jessica Parker can make the most out of any scene partner.

“We are pleased that our current vaccination and mask policy in place is working, and we are most fortunate to have terrific understudies and swings available to help ensure that 'the show will go on' as often as possible,” said Charlotte St. Martin, President of The Broadway League. “With more than five-million theatregoers who will have attended a Broadway show by the end of this week, since our reopening, we believe that Broadway is positioned well to keep the theatres open and to weather whatever the future brings with the new variants that come along.”

Alas, since I wrote my first draft, the Sex and the City star tested positive and the show is currently on hiatus as of April 7. There are times when producers have to make the call. That call. The one no one wants to make. Three shows saw their preview runs interrupted due to the virus in the past week.

The first preview of A Strange Loop, originally scheduled for April 6, was canceled and will now start April 11. A string of Macbeth performances were scrapped due to Daniel Craig’s positive COVID-19 result (it’s currently set to return on the 10th). On its opening night, Suffs star and composer-lyricist Shaina Taub announced she was temporarily out of the show—and then a few minutes later The Public announced the performance had been canceled.

Last night, Paradise Square became the latest show to face disruptions—ticketholders in line April 7 were told 25 minutes before curtain that the show was canceled.

While at first this might seem dire, it appears the system in place is working. When the show can go on, understudies (long-time Broadway favorites and undiscovered talent) take up the mantle. If not, the show or star will return soon and in the meantime, there’s plenty else to see.