Daniel K. Isaac’s ONCE UPON A (KOREAN) TIME Is a Heroic Debut and a Sea of Spectacle – Review 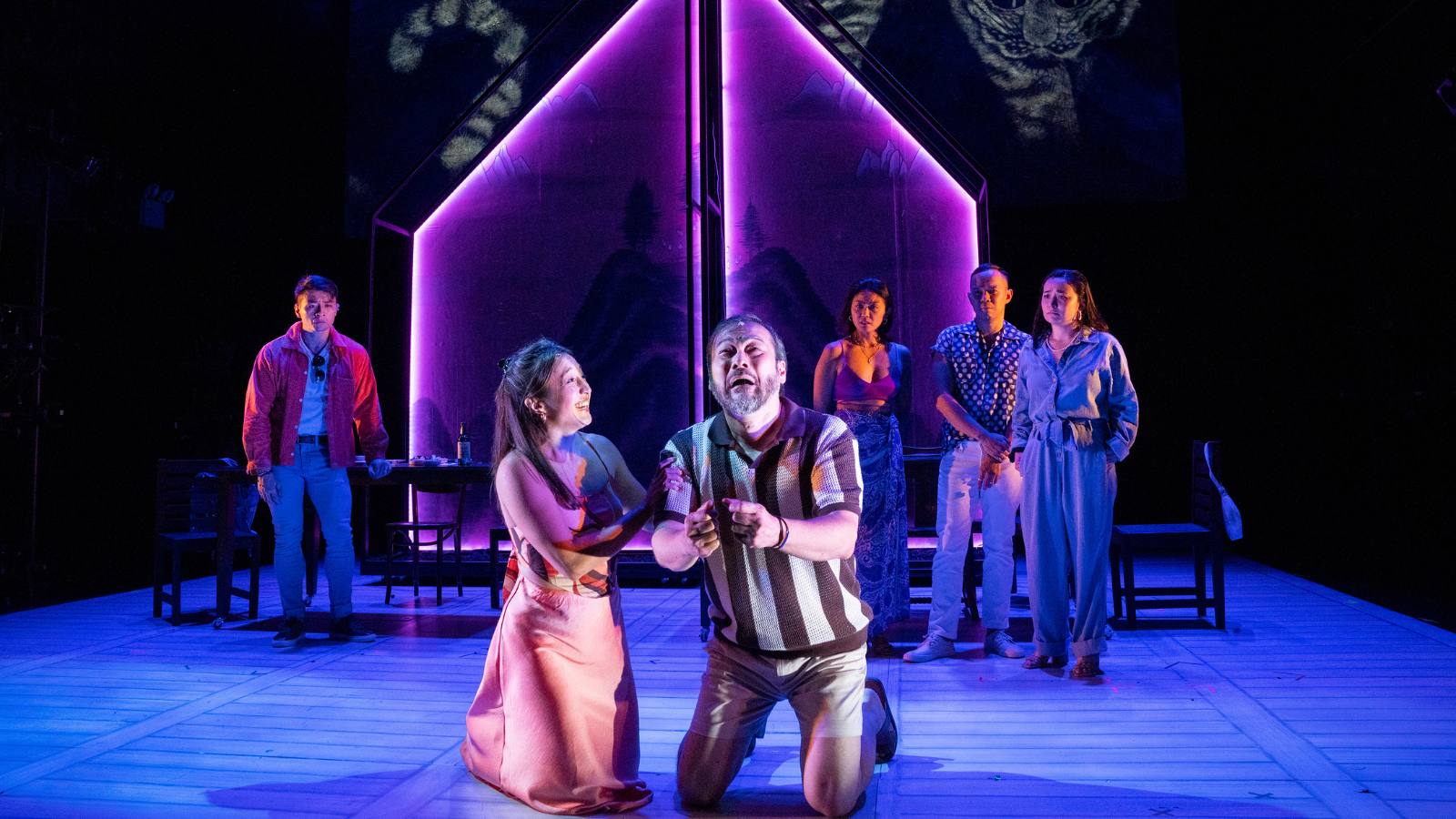 The cast of Once Upon A (korean) Time | Photo: Richard Termine

A Sunday night performance is rare. A Sunday night preview with a full crowd is even more so, but that is the exact reception that Daniel K. Isaac’s Once Upon A (korean) Time is getting. The 90-minute play, commissioned and developed by Ma-Yi Theater Company and performed at La MaMa Off-Broadway, is a spectacle worth running to.

Playwright Daniel K. Isaac is not a complete stranger to theatre (he recently starred in The Chinese Lady), though OUA(k)T is his first produced play. In an interview with Theatrely, Isaac described his desire to capture some of the Korean folk tales and fairy tales he missed while growing up, this play being the result of that personal journey. The tales are performed by an ensemble of Storytellers who take on multiple roles, some stories turning into decades-long sagas of family, sacrifice, and pride.

The play is split into five chapters, with the first four representing earth, water, heaven, and fire. The seven Storytellers move fluidly between the stories and time periods. Standout performances include Jillian Sun’s quick-witted spite as a comfort woman and Jon Norman Schneider’s turn as a Sea DRAGon, a character described by Isaac in the show notes as “Fab. U. Lous.” Sonnie Brown, in myriad roles from a storekeeper to motherly ghost, brings an unexpected additional layer of poignance that gives pause to both her fellow players and the audience. Rounding out the ensemble, Sasha Diamond, David Lee Huynh, Teresa Avia Lim, and David Shih offer performances perfectly befitting the multifaceted work.

In the final chapter as the storytellers come together in modern dress for a dinner party scene, the language shifts from something sacred to more colloquial; the intent being that the stories seen up until this point live on no matter how removed the teller becomes from the origin. This is where some of the writing veers and attention spans stray. Until now, the audience has been swept up into magic and wonder, so it’s only fair that the bubble pops when we hit modern day. The contemporary scene adds a sense of relevancy, but the text here doesn’t quite stand up to the storytelling so far.

Ralph B. Peña, Artistic Director of Ma-Yi Theater Company, directs and steers the production with precision, rarely straying from its purpose. The design team—costumes by Phương Nguyễn, sound by Fabian Obispo, sets by Se Hyun Oh, and lighting by Oliver Wason—works together seamlessly, providing both concrete images and ephemeral ideas, all the while supporting the notion that these stories are intertwined and constantly transforming. With functional props and layered costume components, the designers have created an easy (and visually appealing) flow for the production's many moving parts—and provide a few magical surprises along the way in the form of bubble guns and glitter curtains.

An absolute stand out of the production however, is Yee Eun Nam’s projection design. With usage of the floor, the walls, and the upper playing space, the digital design work here brings an additional dimension to an otherwise limited playing space.

The entire company—actors, creatives, and Isaac—have created an atmosphere that is primarily playful and joyful, despite the occasional drama or tragedy of the tales themselves. On top of that, the play’s themes of connectedness and community radiate off of the stage and into the La MaMa seating set up. As I made my way out of the theatre, I couldn’t help but notice the small gatherings and meetings happening in the lobby after the show, groups laughing and humming the show’s BLACKPINK and BTS tunes. Isaac’s quest to capture his community on paper exceeds its original intent. The Korean fables have made their way into additional groups and will surely be passed on again.

Once Upon A (korean) Time is now playing at La MaMa’s Ellen Stewart Theatre. More information and tickets are available here.