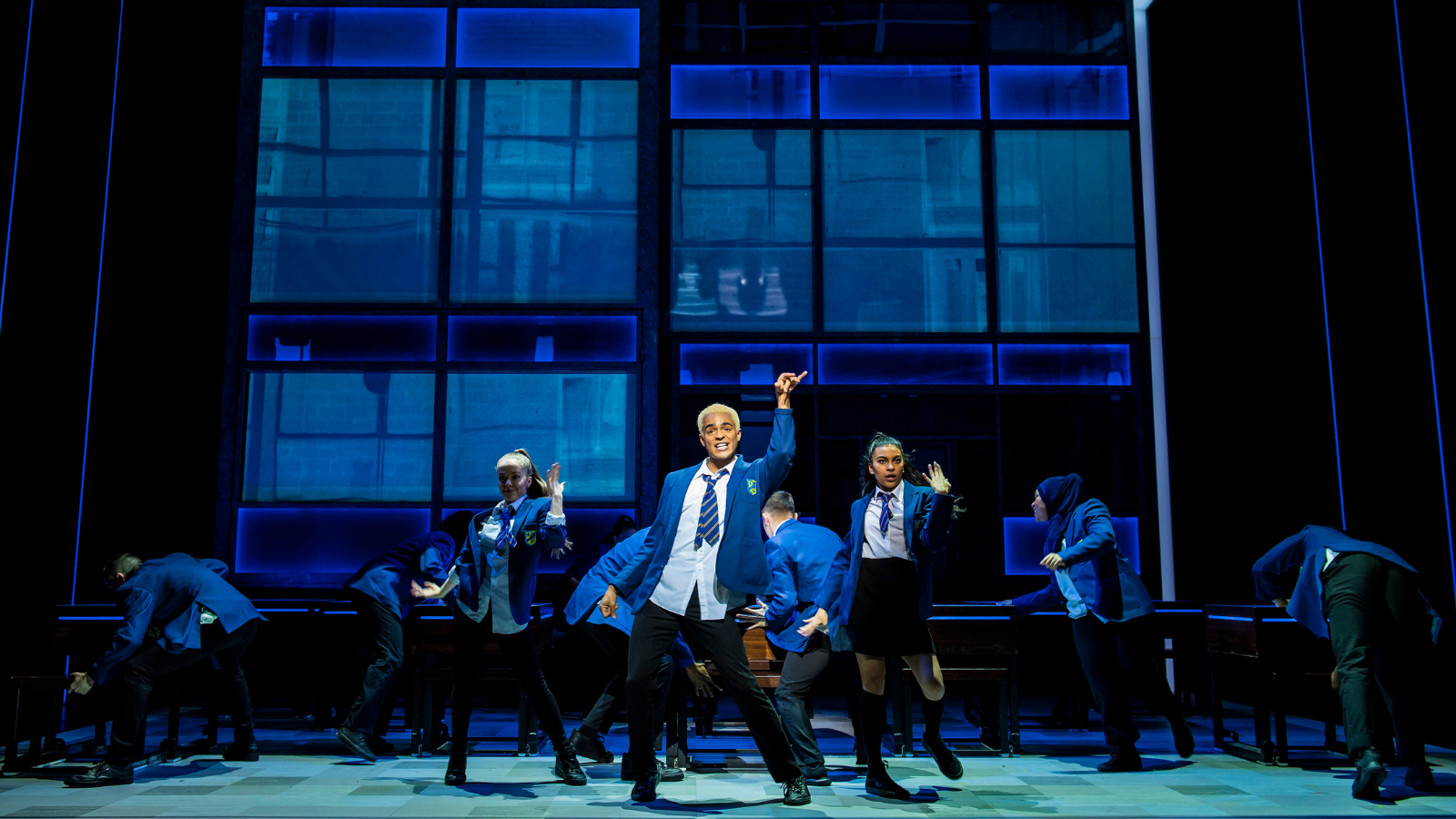 Layton Williams and the cast of Everybody's Talking About Jamie | Photo: Johan Persson

By
Rachel Hsu
No items found.
on
Category:
Reviews

Step aside, Six: there’s a new queen in town. Layton Williams makes a regal US debut as the title role in Everybody’s Talking About Jamie.

Based on the real-life story of Jamie Campbell, Everybody’s Talking About Jamie follows a Sheffield teenager who dreams of going to prom in drag. The show premiered at Sheffield’s Crucible Theatre before opening on the West End in 2017. After a UK tour and a feature film, the musical has finally made its North American debut at Los Angeles’s Ahmanson Theatre.

Jamie is lovable as both campy, moody teenager and fledgling queen. He encounters the archetypal school bullies and intolerant teachers, but their censure means nothing to him: Jamie really just wants support from his struggling mother (Melissa Jacques), his staunchly masculine father (Cameron Johnson), and his modest and brainy best friend (Hiba Elchikhe).

The brilliant casting is topped off with Jamie’s glamorous mentor Loco Chanelle/Hugh (RuPaul’s Drag Race winner Bianca Del Rio/Roy Haylock). Haylock reveals himself as a superb actor — he has impeccable timing and a background in standup, but the character remains grounded in reality. Hugh’s nostalgia, anxiety, and kindness shine through. One only wishes Loco had a little more stage time in full drag. Fans of the film will hear a new musical monologue from Loco — the original musical’s “The Legend of Loco Chanelle” makes a delightful return in place of the film’s “This Was Me.”

Composer Dan Gillespie Sells has a knack for the catchy, and his score makes way for strutting, dancing, and acrobatic feats in stilettos. But the show’s greatest strength may be how the fun elements all gravitate around a genuine emotional center, where pop gives way to rock and soul. Amid all the glitz and glamor, Melissa Jacques stops the show more than once in nothing more than a t-shirt, jeans, and a gorgeous, wistful voice. She is easily the musical’s dark horse, proving herself phenomenal with her eleventh-hour ballad, “He’s My Boy.”

The book, a collaboration between lyricist Tom MacRae and director Jonathan Butterell, has been subtly updated from its English productions. The characters live in our mid-pandemic world, sanitizing obsessively and joking about masks. Multiple Kardashian punchlines were met uproariously by the Los Angeles audience. But Anglophiles needn’t fear: the setting and slang remains faithful to the source, containing so many Britishisms that the program includes a cheeky QR code glossary.

A perhaps less effective use of technology in the show is its techno-modern set, lighting, and unnecessary projection design. Certain set-pieces, including Margaret’s kitchen, the school toilets, and the drag shop Victor’s Secret, are lovingly rendered environments. Designer Anna Fleischle is no stranger to expertly blending set elements, so one wonders whether she was subject to production constraints. However, she redeems herself ten times over in her costume design; characters — quotidian and fabulous alike — are perfectly uniformed, and a one-second quick-change is sure to stun crowds.

The show’s joyful energy requires Kate Prince’s choreography, which is crisply modern with hip-hop influences. Williams is stunning, having cut his teeth as Billy Elliot on the West End. The entire Year Eleven cast can dance, but Kazmin Borrer and Zion Battles are unexpected treats.

Like Jamie himself, this show has some pretty big stilettos to fill. While drag might be shocking in Sheffield, it’s a known quantity in the world of musical theatre (Priscilla, Queen of the Desert, Kinky Boots, Tootsie, on and on and on). So are British schoolkids, queer coming-of-age stories, and messed-up families. Everybody’s Talking About Jamie nevertheless sets itself apart by centering effervescent joy. Jamie’s drag is never a punchline — it is beautiful and celebrated. It’s a queer story that is in no way a tragedy. Everybody’s Talking About Jamie preaches love and acceptance, and wants to put a smile on your face while doing so.

Audiences expect Jamie’s happy ending and are still delighted to see it. The show’s opening night was met with a minutes-long standing ovation. Everybody’s Talking About Jamie is now in performance at the Ahmanson Theatre through February 20, 2022. For tickets and more information, click here.

Rachel Hsu hails from Los Angeles and is currently a student at the UCLA School of Law. Her love of musical theatre started with Tim Burton’s adaptation of Sweeney Todd and things got so out of hand that she and her spouse both included Sondheim quotes in their vows. She worked in editorial design at Hearst’s Cosmopolitan Magazine and was on the staff of the Culinarian Magazine at Columbia University.