In Signature Theatre’s DAPHNE’S DIVE, Brokenness is a Gift and a Curse — Review 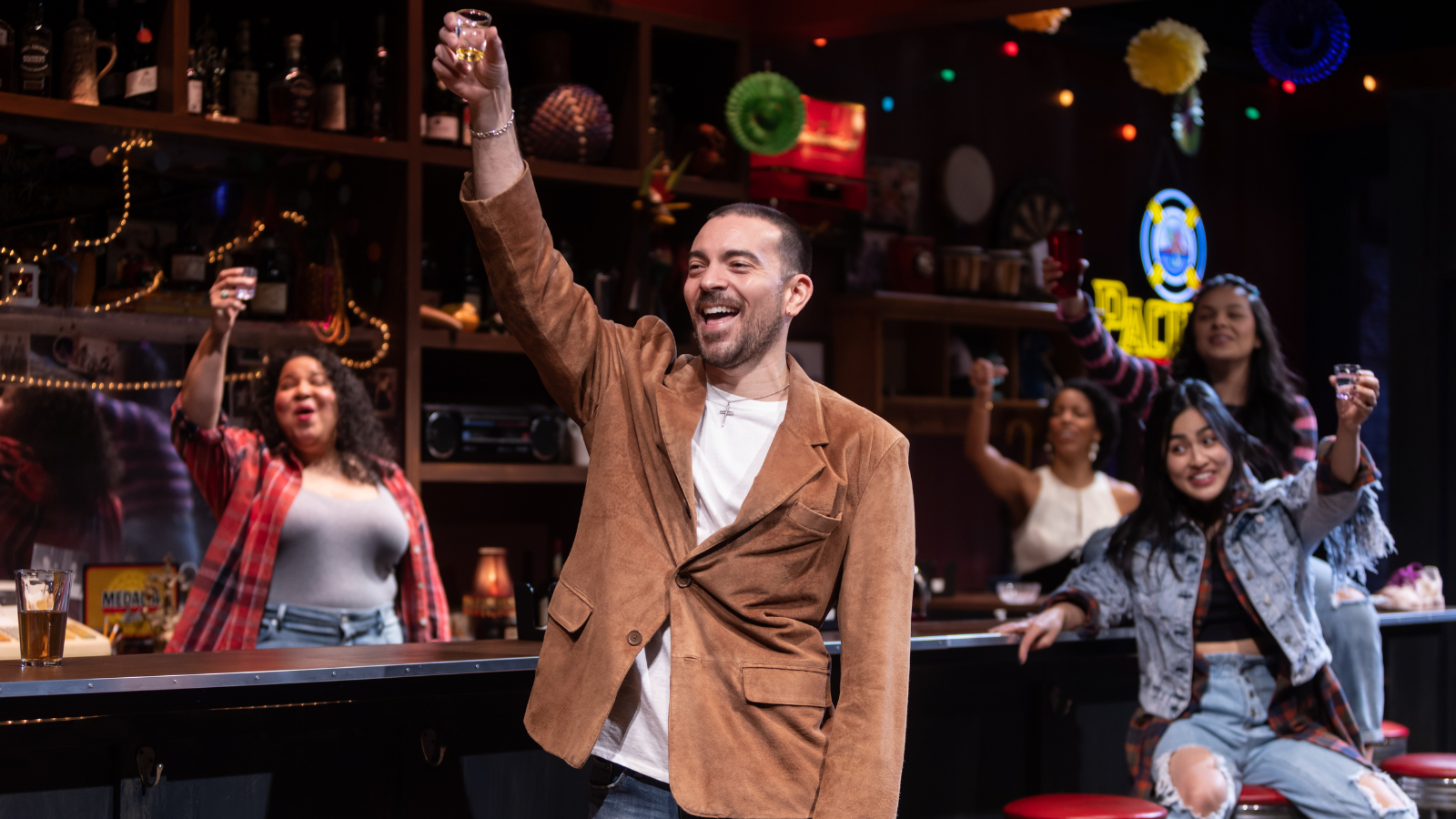 In her memoir My Broken Language, playwright Quiara Alegria Hudes describes four times in her life when she’s had “possessions:” moments where she’s guided by higher spirits and can’t remember exactly what happens. Hudes reveals that the last time she was possessed was while writing a play. “Though I couldn’t remember the possession itself, I knew it was a purging of inherited trauma,” she writes. “But also a tasting. The fire gave me truth even as it burned me. Having left myself in those unremembered hours, did I know myself at last?”

It’s this concept of possession—fiery moments of both realization and fracture—that keep coming up in Hudes’s play Daphne’s Dive, now in production at Arlington, VA’s Signature Theatre. One of the last plays written before Hudes’s extended hiatus from playwriting, Daphne’s Dive is a spiritual forebear to My Broken Language, exploring the possibilities of being physically and mentally broken. We watch characters grapple with the double-edged sword of brokenness, each finding self-destruction or emboldened communal action under the same circumstances.

Before the show even begins, audiences walking into Signature’s ARK Theater are treated to Meghan Raham’s set, an immersive recreation of a Philadelphia bar bursting with flags, boxing gloves, flowers, records, dart boards, trophies, and drinks. It’s a wonderful introduction to the bar’s Puerto Rican owner Daphne (Ryanne Gonzales). Like her bar, Daphne is full of life and many hidden histories.

The show begins in the mid-90s, as another day brings another round of regulars to Daphne’s watering hole. Pablo (a charming Jonathan Atkinson) is a just-scraping-by artist, obsessed with rummaging through trash to use for painting material. Rey (Jefferson A. Russell) is a reserved motorcyclist, surprised by the presence of Jenn (Quynh-My Luu), a spirited activist donning little else besides an American flag bikini and a flag advocating “peace, liberty, ecology, democracy.” Despite recently moving to the suburbs, Daphne’s sister Inez (Yesenia Igelsias) makes an appearance along with her business-man husband Acosta (James Whalen).

The difficult economic circumstances each character is facing are mostly kept in the background for a while, until Pablo discovers the eleven-year-old Ruby (Jyline Carranza) behind the bar’s dumpster, having jumped from a third-story window after fleeing from the cops. It’s this moment of self-created but institutionally-motivated violence that reverberates throughout the play, subtly leading each character to confront how to navigate a world that has often broken their spirits.

Daphne’s Dive takes place over the course of decades, each scene happening four-to-five years apart. Director Paige Hernandez takes this challenge on gracefully, allowing the bar and the actors’ performance to change while still feeling grounded in a shared history. Many characters are searching for some kind of power: Acosta runs for political office, Pablo wants recognition for his artwork, Jenn wants to reshape the world through her activism. Like her musical In the Heights, in Daphne’s Dive Hudes doesn’t really dissect which policies accumulate or democratize power, instead focusing on how powerlessness shapes the course of a lifetime. Over the course of the show, we see how powerlessness hardens some of the bar’s regulars, drives others to engage with their vulnerable community, and brings some to tragic ends.

We can see all of these reactions to powerlessness in the relationship between Daphne and Ruby, who make up the heart of the show once Daphne adopts the struggling teen. As Daphne, Gonzales is a boisterous presence, providing a maternal presence while somehow still diverting attention away from herself (the bar often feels like a moat keeping away invading questions). As Ruby, Carranza excellently displays her character’s elliptical journey to maturity, as she both detests and admires elements of her adopted mother.

Because there are so many characters, so much life on display, Hudes occasionally doesn’t provide some characters the interiority of Daphne and Ruby. Sometimes this problem is solved in this Signature Theatre production, like when Inez asks her husband to stop calling her “negra,” Igelsias’s decisive stance communicates a whole history of colorism in Latinidad. But I wished that Quynh-My’s Jenn—based on the real life Philadelphia activist Kathy Chang(e)—had more of these moments to shine in performance. Especially because Jenn’s sex work backstory has resonance with contemporary Asian American tragedies, and Jenn’s actions motivate much of the plot.

I’ve long admired Hudes’s talent for noticing the beautiful imagery of everyday life. In her Putlizer-Prize winning work Water by the Spoonful, water becomes a sort of omnipresent entity; an elixir for physical illness in small amounts, but a life-threatening substance in the ocean. Reading that play is like being submerged in water. You’re tugged by deep emotional tides, drowning in words that are fluid, smooth, and calm.

Building off Jenn’s poetry, Daphne’s Dive is shaped by another element: fire. Like water, fire has the capacity to renew as well as destroy; but fire’s also sharper, faster, its effects more immediate. Thus, watching Daphne’s Dive is like seeing the bar set ablaze. The play’s energy is flickering and enthralling. You watch characters burn with passion, brightly and dangerously. You’re watching a torch handed across generations. You leave feeling that awakening glow, and its burns.

After watching Daphne’s Dive, I’m reminded that each character’s brokenness, like fire, can be both a gift and a curse. Maybe the same could be said for theatre itself. Like Hudes going through a “possession,” when I watch a play I leave myself for a few unremembered hours, only to know myself more in the end.

So even though I’ve been broken by watching theatre recently, I keep coming back. I know I’ll occasionally witness a beautiful theatre production like Signature’s Daphne’s Dive, and remember that this artform that hurts me can also be a blessing.