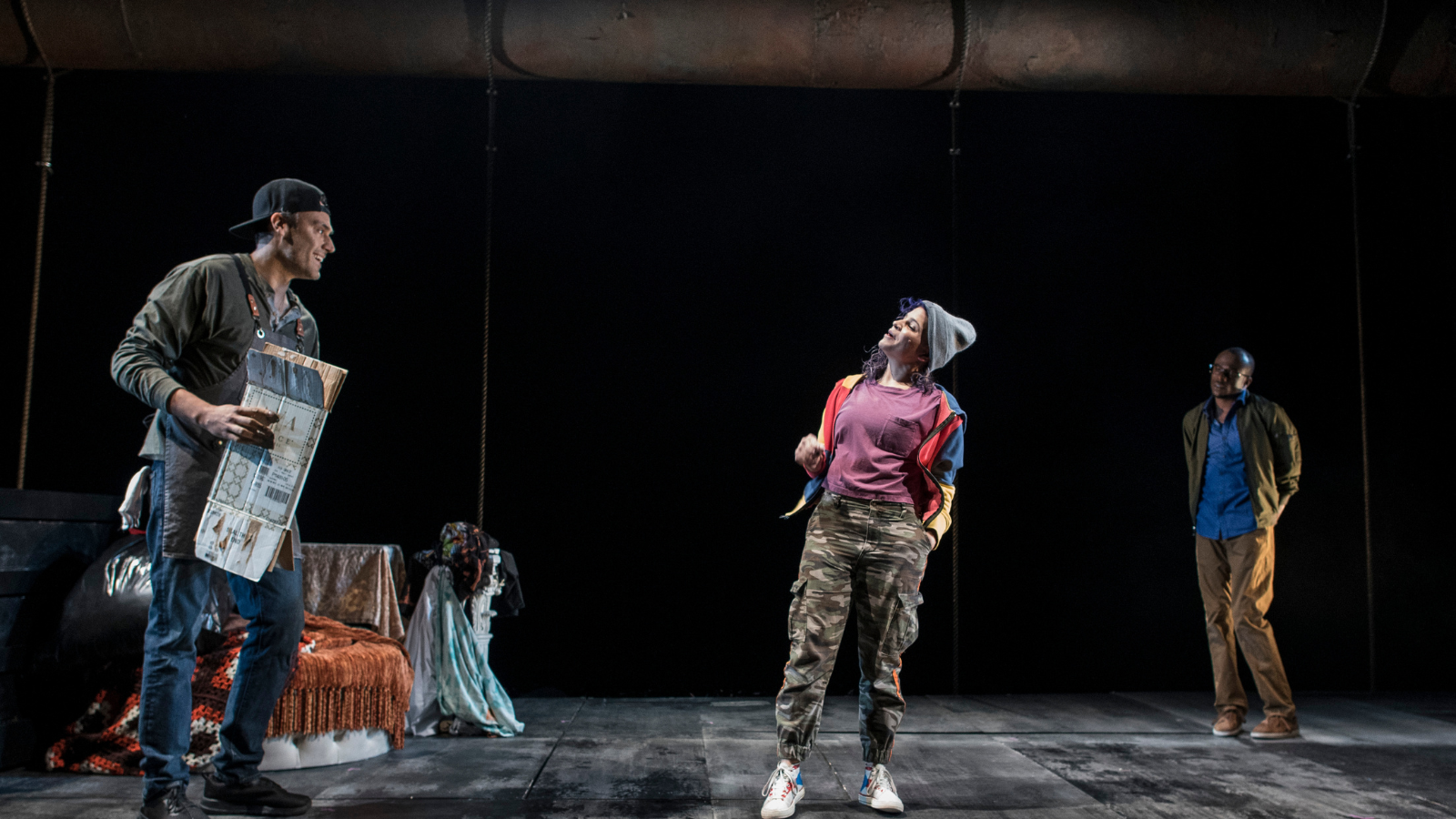 The company of There's Always The Hudson | Photo: Teresa Castracane

When a piece of media reminds you so much of other movies, television shows, and theatre, its author is playing a dangerous game. For many works of art, comparison doesn’t alway prove flattering; just think of all the times you’ve watched a film and thought, “Oh well this other movie did it better.” Even well-crafted works that are highly referential can be derided for being unoriginal.

Then again, a similar critique can be lobbed back at critics like myself, who like comparing contemporary cultural objects together. Shouldn’t artwork be written about independently from the art that inspired it? Shouldn’t we critics treat art on its own terms?

In a strange way, both playwright Paola Lázaro and I are in the same precarious position of acknowledging an artwork’s set of influences, while still making the case for that same artwork’s uniqueness. Lázaro’s play There’s Always the Hudson, making its world premiere at D.C.’s Woolly Mammoth Theatre Company, is an uber-intertextual work that practically begs its audience to trace a web of artistic associations around it. Singular in its bold vision and yet indebted to countless staples of genre filmmaking, There’s Always the Hudson is most fascinating as a piece of meta-theatre: a story that asks us to reconsider the other stories we’ve internalized in the past.

This tension between legacy and originality is what makes the play so enthralling. But this same tension also occasionally makes the play a frustrating watch in its recreation, but not transcendence, of now familiar genre tropes.

There’s Always the Hudson follows Lola (Lázaro also acting in the lead role), an anxious Nuyorican woman who wears a multicolored sweatshirt around her like a coat of armor. If Lola seems irascible, it’s for good reason: she’s struggling to reconcile her past experiences with sexual assault, feeling let down by her support group meetings and any attempts to find justice. Her friend T (Justin Weaks) is in the same boat. A queer Haitian man who’s also gone through sexual assault, T feels disappointed in himself for not being able to perform sexually for his boyfriend. This sadness manifests itself in a sort of word vomit that reveals his depression.

Thinking that there’s no way to keep on living through their pain, Lola and T team up for one wild night of retribution before ending it all. Their goal is to confront all the people in their lives who have “fucked them up”—including their assaulters—and then commit suicide by jumping off the George Washington Bridge at 4:32 AM. “This is our way of giving back to the world,” Lola tells T. “Giving back to the world by making sure that when we go? We leave it a little fucking better than how we found it.”

As the audience is watching There’s Always the Hudson, two kinds of genre films flicker in our minds: the buddy comedy movie and the rape revenge thriller (production dramaturg Chelsea Radigan even notes this in the show’s playbill). While there are some unexpected twists especially towards the end of the show, Lázaro doesn’t subvert these genres as much as she restages them with her own wild panache. Unlike, say, the recent it’s not a trip it’s a journey which genuinely stated something new in its genre hopping, There’s Always the Hudson feels more comfortable just recreating the beats of its genre’s storylines. Maybe Lázaro feels that it’s not a story’s message that has to be new, but rather the methods in which those messages are told.

The elemental simplicity of There’s Always the Hudson allows us to focus on the remarkable performances and production on display. Scenic designer Misha Kachman has crafted a haunting ever-evolving set, with the GWB always in the background as a dark harbinger of things to come. Lázaro and Weaks expertly embody an absurd manic energy that lets us know their characters’ suicide pact comes from a fiercely committed friendship. The supporting cast—Migs Govea, Marilyn Torres, and Elan Zafir—all gamely take on multiple roles as the people confronted by Lola and T. Especially wonderful is Torres as the character Madeline, a lonely woman who still says critical things at support group meetings. Torres’s doe-eyed portrayal of a callous person is awkwardly endearing. But her performance also captures something unnerving about society’s dismissal of sexual assault survivors.

There’s Always the Hudson was the production Woolly Mammoth was rehearsing in 2020 when production had to be shut down due to the start of the COVID-19 pandemic. While Lázaro’s play was always intertextual (as the play’s social media promotion even acknowledges), it’s now being staged in front of audiences who have witnessed the sexual assault revenge story ascend as one of the most critically popular genres of the 2020s.

Just look at the past two years, and you’ll see the amount of assault-revenge stories proliferating. Michaela Coel’s 2020 miniseries I May Destroy You is the ne plus ultra of this trend, an autobiographical, scintillating portrait of the overlapping violences perpetrated on and by Black women. Paula Vogel’s seminal 1997 play How I Learned to Drive has finally reached on Broadway this year, and it’s a masterpiece in exposing how the guilts and horrors of sexual assault are shared communally. And There’s Always the Hudson is structurally the most similar to last year’s Oscar-award winning film Promising Young Woman, which also episodically follows a woman with a death wish and a list of people she’s willing to violently confront because of an assault.

You might say There’s Always the Hudson was prophetic in anticipating audiences’ hungers for these types of stories way back in 2020. But you could also say that these other works of art beat Lázaro’s play to the punch, sometimes pulling off the rape revenge story better than she did. For example, in the playbill dramaturg Chelsea Radigan throws some light shade towards Promising Young Woman, but I think that film did a better job of fleshing out its supporting characters than this play does.

Ultimately, I think the truth about There’s Always the Hudson is somewhere in the middle. Despite its saturation of allusions, the play still captures a story that vitally needs to be told. If the sexual assault revenge story seems in vogue right now, it’s because there’s been a decades-long dearth of those stories told from a woman’s perspective.

If there are moments when There’s Always the Hudson soars, it’s when the play surpasses its genre conventions, and Lázaro tells us a story with the cultural specificity only she could write. Because T is Black and his assaulter is white, Lázaro expertly mines the horrifying racial dynamics that arise when their confrontation occurs. T’s religiosity also comes up again and again in the play, and even though he has a strained relationship to prayer, it makes sense that a Haitian immigrant would still defer to his Christian upbringing. Lola’s family is full of highly specific moments too. Her family’s reaction to her assault reminded me of the repression I’ve faced discussing painful experiences with my own Filipino family.

For the people of color watching There’s Always the Hudson, there’s a relief in seeing these dynamics named and witnessed together. Throughout the play, many people of color in the audience would snap their fingers, clap, “Mmmm-hmmm,” and nod along when they saw something they recognized. We couldn’t keep these sounds trapped in our mouths; we had to let them out. The environment created in that room was vastly different than ones created by the other pieces of media I’ve seen discussing sexual assault. After a while, I couldn’t help but join the crowd in this verbal affirmation, too.

There’s Always the Hudson is in performance at Washington, D.C.’s Woolly Mammoth Theatre through June 5. For tickets and more information, visit here.