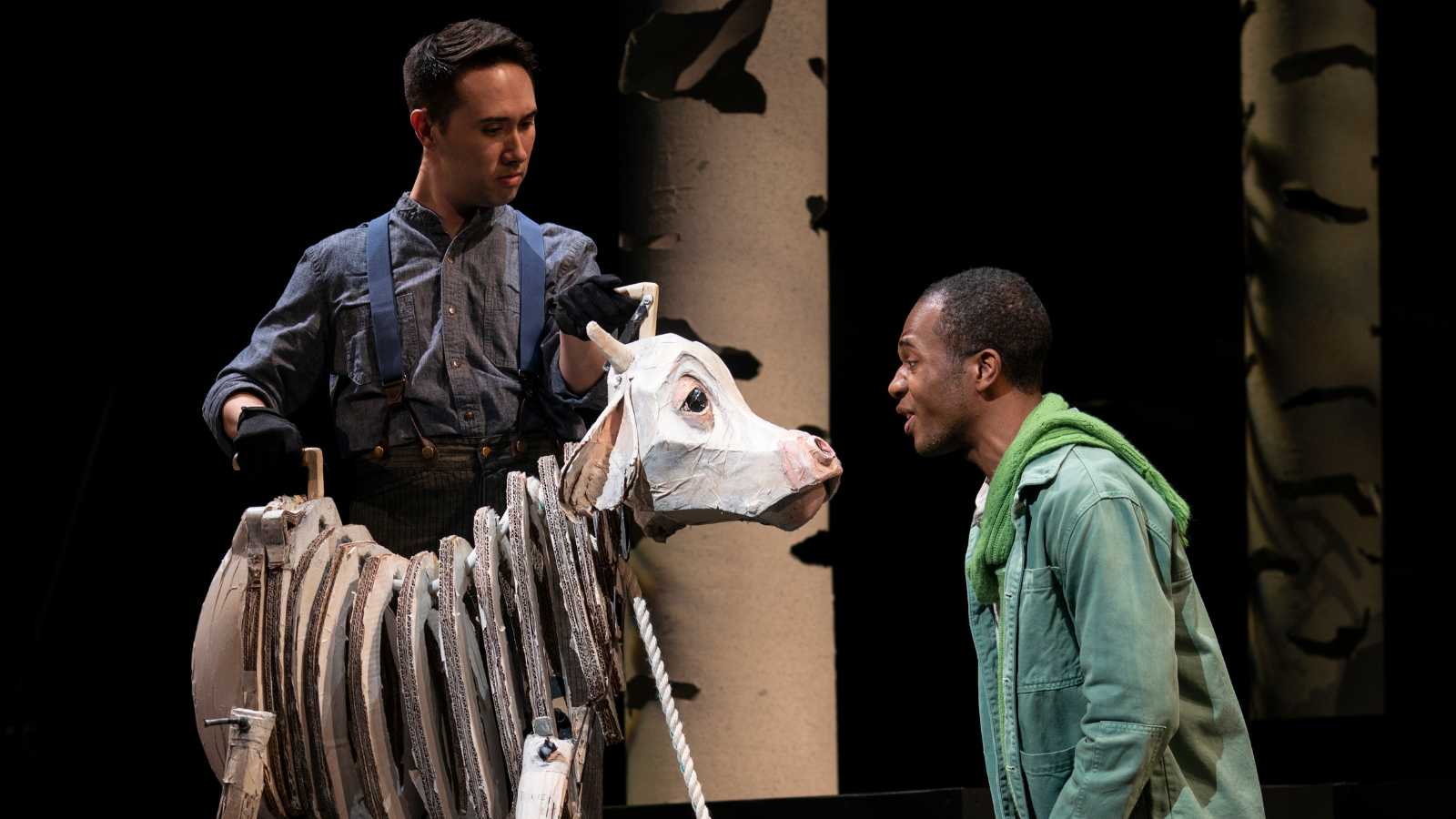 Every show has a backstage tale of yore—but the one Kennedy Kanagawa shared with me has to be one of the strangest. The breakout star is currently playing Milky White in New York City Center’s Encores! production of Stephen Sondheim and James Lapine’s Into The Woods, considered by many to be the hottest ticket in town.

Milky White has proven to be a fan-favorite thanks to Kanagawa’s charming and humanistic portrayal of the bovine. And that’s saying something: standing out among a star-studded cast that includes Heather Headley as The Witch, Neil Patrick Harris as The Baker, Gavin Creel as The Wolf/Cinderella’s Prince, Denée Benton as Cinderella, and Sara Bareilles as the Baker’s Wife, is no easy feat.

To celebrate his newfound fandom, Theatrely sat down with Kennedy to chat about his love for Into the Woods, what it’s been like backstage, and more.

‍You’ve been mentioned in almost every review and Twitter stans are calling for Tony Awards. How tuned in have you been to the response?
Kennedy: HA! That’s so funny. I’ve had a couple of friends tagging me in posts and forwarding them to me. It’s been really fun watching all the silly, funny things people say.

‍Did you anticipate the audience reaction would be like that?
‍I don't think that I was anticipating the reaction the way that it has been. In the [creative] process I worked really closely with James Ortiz, who designed the puppet and is just a masterful puppet person. It was really fun kind of finding the movement vocabulary of Milky White. He would come up to me and say “Maybe try this” or “How about in this part you do this?” And then, you know, also collaborating with the other actors like Neil [Patrick Harris] suggested, “I’ll just run off with the cow without you.”‍

Have you done puppetry work before?
‍I hadn't, no, which is just so crazy—and I’m having a blast! I’ve done physical theatre-ish stuff that feels puppet-adjacent, but this is my first time. And I really appreciate James’s approach of not being in black spandex and trying to blend into the background...we’re acknowledging that I exist [as a performer]. I was joking with Cole [Thompson, who plays Jack] that I am another son of Jack’s Mother (Ann Harada) who is just obsessed with the cow. Everyone just ignores me but he’s just always there. [Laughs.]‍

I heard you’ve worked with Ann several times?
‍I did [the 2018 NAAP concert] with Ann Harada—she played The Witch!—which was really fun. She was also in the very first professional show I did, the all-Asian production of Falsettoland at the Vineyard. I played Jason when I was 13 and she was Trina. So, it’s been such a fun journey, starting out with her. One time I asked her, “What is belting?,” and Jason Ma said, “Ann, would you demonstrate?" So, she’s like one that made me understand belting and now we’re hanging out together with the cow.‍

We love a deep cut. That’s so fun! Do you have a first memory of Into the Woods?
‍I had the double-CD set, because it’s so long, of the original Broadway cast and I just played it on loop, for years, frankly, and sometimes still do that in my bedroom. When people ask, “What’s your favorite show?” I say “Into The Woods.” It’s my favorite show of all time. I know all the words to all of the roles. Me and Cole will be backstage waiting to re-enter and Heather Headley will be doing the witch’s rap, and we’re just lip-synching along to her, living our best lives. It’s just unreal that it’s happening in the real world.‍

What went through your mind when you first found out that you were in this cast with all these people?
‍I completely lost my shit. I was terrified, like major imposter syndrome. But when we got into the room, everyone was so kind, there are no egos and everyone is so sweet. I think because it was such a crazy, fast process, we all just banded together. With Encores!, there’s a lot of discussion of being on book—but I’m literally holding a cow, so I’m not allowed to hold a script. I’m not physically capable of it; it’s a lot of pressure, but now we’re open and everyone is just crushing it. It’s not a repeat of Bernadette or Joanna or Chip; everyone is making such a smart and original take on their characters. I’m just so grateful that I get to watch; I’m glued to the monitor every night when I’m not on stage, and I’m usually crying at some point in the show.‍

Do you have any backstage anecdotes?
‍Oh, absolutely. On Sunday night..we’ve got a couple songs left and I’m backstage sitting, waiting for my next entrance. Gavin Creel is sitting with me and we’re just looking at Milky White. She’s lying on the ground, chilling, living her best life. And he goes, “Huh. One of her teats is missing.” Her udder has four teats and one was gone, just snapped off. And I was like, “Huh!?” So then I went to one of our stage managers, and I whispered, “Julie, I don’t know where it is, but somewhere Milky White has lost a teat.” And she looks at me for a second and then goes, “Oh my God!” and runs away. She comes back holding the teat and I’m whisper-screaming “That’s it!” She didn’t know what it was—she told me she thought it was a testicle, ha! And then we had Monday off and on Tuesday, I came back and, of course, she miraculously glued it back on.‍

HA! That might be the best backstage story I’ve ever heard? If you ended up in the woods, who would your fairy tale character be?
‍I would probably be Jack of Jack and Jill fame. I’m a major klutz, so I feel like a fairy tale just about me falling and hurting myself sounds appropriate. Yeah...I think all my friends would say that tracks.‍

Do you believe in wearing white after Labor Day?
‍Oh, yeah. If it brings you joy, sure!‍

What is the most important aspect of a cheese board?
‍Triple cream goat cheese.‍

Where is Jack’s father?
‍I think he went to go get milk because Milky White wasn’t producing any and he’s still out there.‍

Into The Woods is currently playing at New York City Center through May 15.