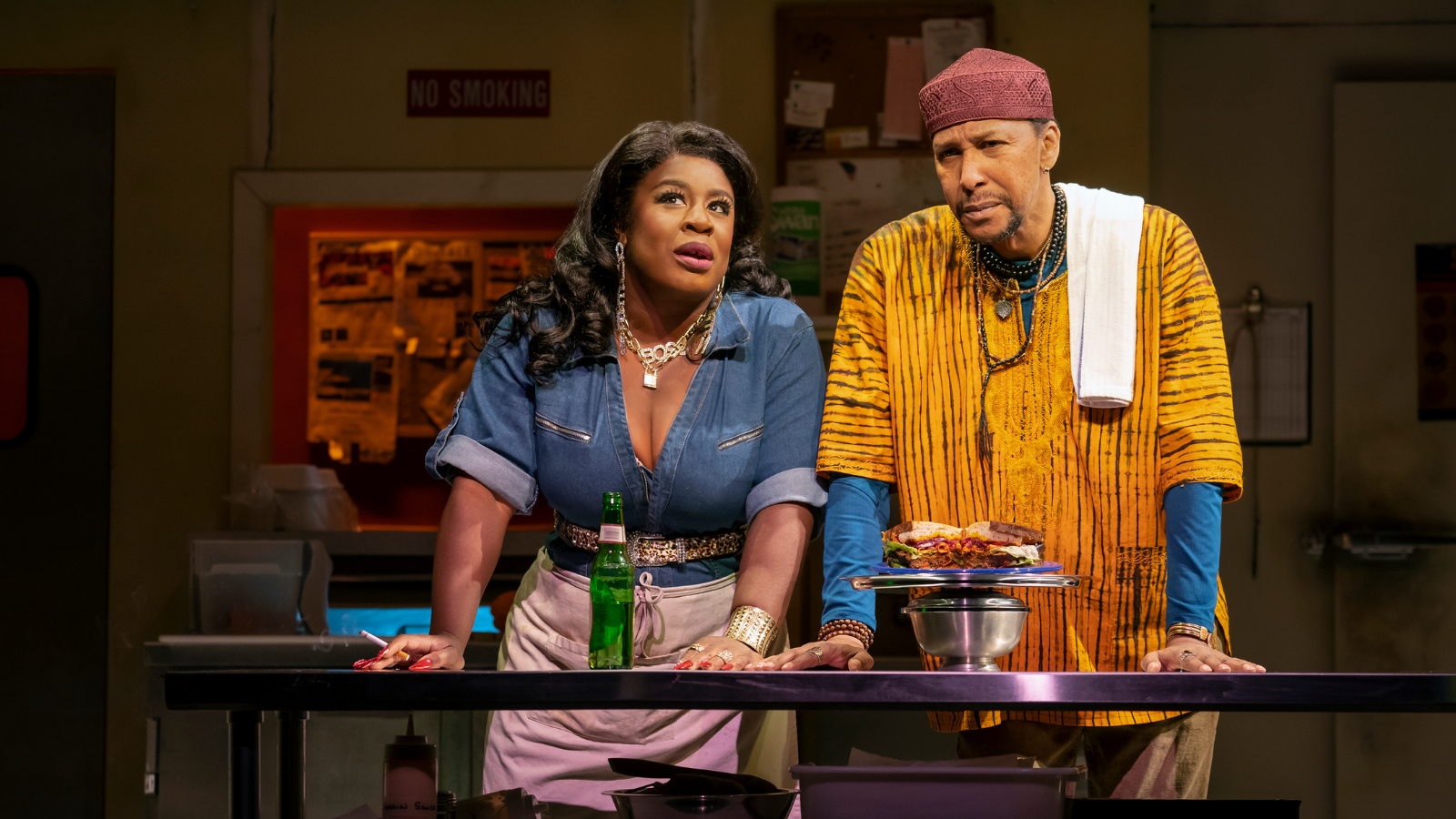 By
Caroline Cao
No items found.
on
Category:
Features

When the pandemic spiraled the theatre industry into a shutdown and crisis, some theatres explored and experimented with virtual platforms—from Zoom to TikTok—in order to offer accessibility as well as toy with the theatre artform. Virtual avenues lingered during the reopening period of Broadway and off-Broadway starting in September 2021 with masked and vaccination requirements for in-person attendees.

In a welcomed move, the Second Stage Theater stepped up to the virtual challenge with a plan to livestream their currently running production of Lynn Nottage’s Clyde’s in its final two weeks of performance at the Hayes Theater on Broadway. For virtual spectators, you get the heaping of live audience energy and the security of watching it from the couch at home.

Uzo Aduba plays the eponymous diner owner but Clyde’s is less about the titular character and more about her kitchen staff of ex-convicts, played by Ron Cephas Jones, Edmund Donovan, Reza Salazar, and Kara Young. Nottage’s play oozes in salivating descriptions of the “Perfect Sandwich” as much as Nottage’s Intimate Apparel ruminates on the design of undergarments. The idea of the Perfect Sandwich is the coping mechanism for the frazzled cooks to nourish their imagination and hopes through their grueling labor in the kitchen.

Theatrely spoke with Reed Wilkerson, general manager of Second Stage, to talk about the historical simulcast process. Our conversation has been edited and condensed for clarity.

Why did Second Stage decide to set up the live simulcast?

It's an interesting thing to realize that there was an appetite for theatre in a lot of different forms and that we could offer those as well as really expand our audience base. And it’s not just about our audience base. We give people access that normally wouldn't have access, either because they weren't comfortable coming to the theater because of COVID or they might have disability issues. We learned a lot over those 18 months of the shutdown, and we realized this was a good opportunity!

Can you summarize your responsibilities with the simulcast as the general manager?

I oversee the day-to-day operations of the shows here at Second Stage. And specifically, I'm responsible for negotiating all of the contracts for the Second Stage, and then making sure all these terms are carried out.

Can you talk about how Second Stage connected with Assemble Stream, the company in charge of the streaming?

Assemble Stream is a relatively new company that focuses specifically on streaming events. They've been a great partner for us.

Talk to me about the process.

It's been a good process! Assemble is the one that captures the actual production and the show is streamed through their website. So we have partnered with them to work out all the logistics of how our ticket buyers can purchase tickets and watch the show through their site. We've also been working with them to ensure quality control of the actual product and our director has been involved in a way to make sure that the video is up at its highest quality possible.

Could you talk about the process of setting up the five to seven cameras operated remotely?

Yeah, so those cameras were installed directly into the theater. The cameras were set up in ways that the audience cannot see — they're actually very small. And so they're not really disruptive to the normal [in-person] audience. They're not the traditional large, multi cameras.

Now I have read critiques about the price of $59 (with a $30 discount for those under 30) for the simulcast. How would you address those critiques?

That's a good question. $59 is the same price as our tickets at the box office. So the idea is really not to undercut in-person sales. Our priorities are in-person sales.

And there is also a cap to the simulcast purchases. What decides those caps?

The caps were put in place based on agreements made with the unions. The cap is about 250 to 300 per performance.

What do you think it takes to make Broadway more accessible in the virtual space?

That's also a great question. I think what we are doing is a bit of a new experiment and we’re trying this out. It's exciting because I do think it can make things much more accessible for those who can easily get or have accessibility issues or just things that restrict them from coming. I am hopeful that depending on how this experiment goes, we can really increase our accessibility and open up the opportunity for more people to be able to view live theater.

Are there contingencies in place for any technical difficulties?

We do have captures of the performance.

How do you address lighting for the cameras?

The actual design did not change.

So there’s the energy of the live audience with the cameras setup. We have a cast that’s definitely acted for the camera before. Would you say there’s a shift in their performance energy now that there are cameras recording?

I don't know! The live experience is still our priority.  I don't know but I don't think so. Our priorities are still the experience that people get when they come to the theatre.

How did the director Kate Whoriskey and Lynn Nottage react to the news that the play was going to be livestreamed?

They were supportive! They've actually been both really supportive and been involved in the entire process. I think they recognize that it’s an opportunity for people who can’t come to the theatre.

Do you see Second Stage doing more livestreams of other shows?

I think this is a pilot and we are learning and we're going to continue to learn about it. We'll kind of see what the future holds. I think there's a market for it and hopefully we'll try to continue it in some way!

Clyde's is now in performance at the Hayes Theatre on 44th Street in New York City as well as streaming worldwide until January 16, 2022. For tickets and more information, visit here.

A Houstonian at heart, Caroline Cao graduated at The New School with an MFA in Nonfiction. Her wit has appeared on SlashFilm, Polygon, TDF Stages and more. She also has also penned performed arias and duets for the Really Spicy Opera - Aria Institute. She does not shut up about animation. When she's not writing about theatre, movies, and TV, she's writing librettos and fanfiction and cooking ramen.