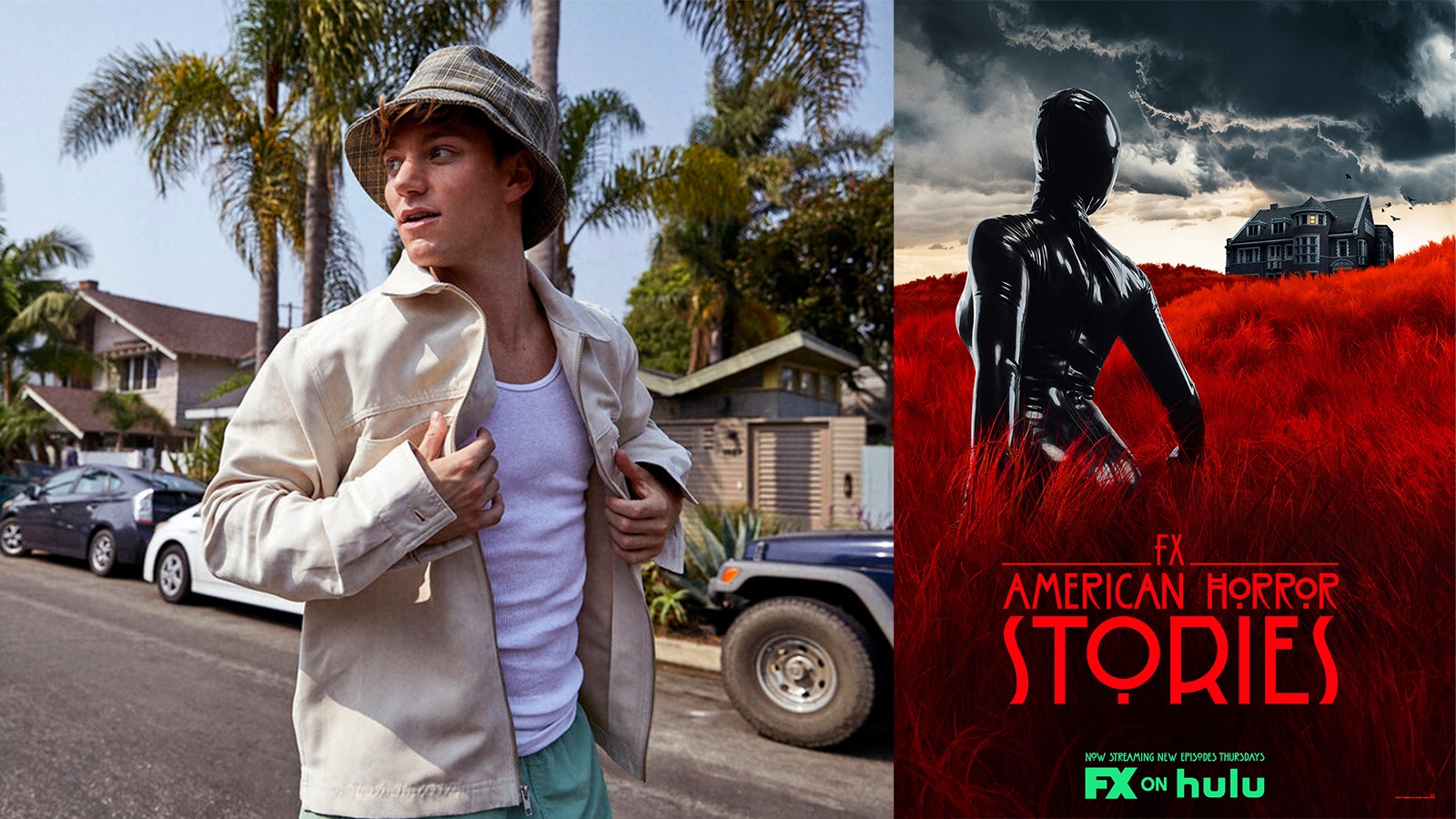 You may know Nico Greetham from The Prom on Netflix, as the Yellow Power Ranger in Power Rangers Ninja Steel, as a finalist on season 10 of So You Think You Can Dance, or if you really want to go back as Darcy and Jojo in Newsies on Broadway. This week you can catch him as total dude and aspiring social media influencer Zinn in the episode “The Naughty List” of American Horror Stories. We caught up with Nico on what it’s like being a bro, how coming from theatre helped him play one, and what he’d do if he could create any season of American Horror Story.

Nico, I just finished watching your episode — that was a crazy watch!

Thank you for watching, I appreciate it!

Of course! Tell me about Zinn in your own words.

Oh, good old Zinn! He has been an aspiring influencer for probably his whole life because he grew up in this time where that is such a thing. And it's so interesting that these guys exist. I based Zinn off of, there's this TikToker named Bryce Hall, he's part of the Sway House, which is basically a bro-house/content creation house. And then of course we have Logan Paul and Jake Paul, who are obviously heavily influenced as well. But then at the end of the day, these guys think that the world revolves around them. And there's a bit of insanity and sociopathy. It's just total commitment and truly authentic commitment to living the American dream, they have a God given right to do this and this is what they do. So there's kind of no limits. And it's horrifying! But I really did learn a lot researching these boys. And of course you have to empathize with this guy when you're playing him.

Oh absolutely, when I was watching I got very–especially in the first video that you guys shoot in the episode–Logan Paul shooting that awful video in the Aokigahara Forest.

And I know that the writers wanted to stay true to some actual real things that have happened. And the fact that that's the real thing, it's just not human!

Something I find so interesting about the American Horror Story universe in general is for the most part, the series tries to not date itself as modern day and feel more like a period piece. But your episode feels very now and very timely. How differently do you approach an episode that's so rooted in our current reality?

Well, I think it's really just making sure that we know what is authentically now and what goes into the real life versions of what we were doing. And I know that our director, Max Winkler, did a lot of research. So I think we all felt super safe knowing that. Even in the editing and making of the whole opening sequence, it feels important to keep it true to how YouTubers really do edit and what they really say. You know, all these intros where you're, "Yo! What's up, everybody?" All that stuff, which is so unnatural and inhuman, that is who they are. And they're always at 150%. That was one of my biggest things, was I think this guy is just always on. And frankly, it was exhausting! How do these guys live like this every day? I lost my voice the first four days on set. Truly, at the end of the day I couldn't speak. I just don't know how they truly function in their day to day lives.

Both you and Dyllón [Burnside] have theatrical backgrounds, I feel like knowing how to belt it out for the balcony helps with that! Did that background help you in playing Zinn?

You know what helped from my theatre background is with my voice going every night, I would wake up every day and do my vocal warm up with my tea in the car on the way to set listening to Broadway jams! But yeah, I am grateful for the understanding of my vocal cords, because if not, I don't know what I would have done.

And in these anthology episodes you get a self-contained story that you shoot with a crazy cast in such a small time, what was that like getting to work alongside people like Kevin McHale and Danny Trejo?

Because we shot it over, I believe it was ten days, it's almost long enough to where you build relationships with everyone on the crew. Obviously you and your castmates get super close, super quick. But then it's short to where you're like, "Oh man, we're just getting warmed up!" Working with Danny Trejo was a dream that I didn't even know that I had. I didn't even think this is going to be in my cards, and then here we are talking about his history and he's giving me all these tips and tricks. And it was just so funny talking to him because he's such a nice man and very paternal but then has the scariest voice! And then Kevin and I go way back. I've known him for years — we really are homies. So that was honestly just a joy to be with him.

Were you a fan of American Horror Story before being cast in the show?

Yes, a huge fan! I watched every episode as it would come out weekly. And it's actually a funny story. So when I was talking to Ryan Murphy when The Prom came out, he was like, "Send me some comments that you received, I want to see what the kids are saying." So I would, and one day I slipped in three comments that I got being like, "Oh, I hope that you get to work with Ryan again on American Horror Story!" It was so ballsy and bold and I was so nervous to do it. But I was also like I'm just going to send this to him. I sent him a screenshot of three people saying that and he didn't respond! And then cut to me getting this offer, not that I think that's the reason why I got cast, I do still consider asking him, "Did you really see what I sent you? And does that have anything to do with this?".

That brings me right to my last question–also Ryan Murphy related–which is if Ryan came up to you one day and said, "you can create any season of American Horror Story you want, pick any time or theme," what do you think you'd do?

That is a loaded question! Well, let me tell you, this year when he was teasing these ideas for all the fans–me included because I'm a fan–for the newest ASH seasons and he mentioned Sirens. And I believe in the teaser for season ten it looks like there is some sort of Siren-esque thing. I think that is such a good idea that I'm really excited for, the Sirens and the Aliens that are coming up. But if I had to make my own, I'm a baby when it comes to cockroaches. And I don't know if there's a whole season there, maybe it's a spinoff or a one episode thing. But anything that has to do with bugs really makes me sick. So maybe that, maybe I'll pitch that to Ryan.

Well maybe you'll make that in the next season of American Horror Stories!

Ha! It's just called "Bugs" and everyone's like, "No one asked for this!"

American Horror Stories is streaming exclusively on FX on Hulu.