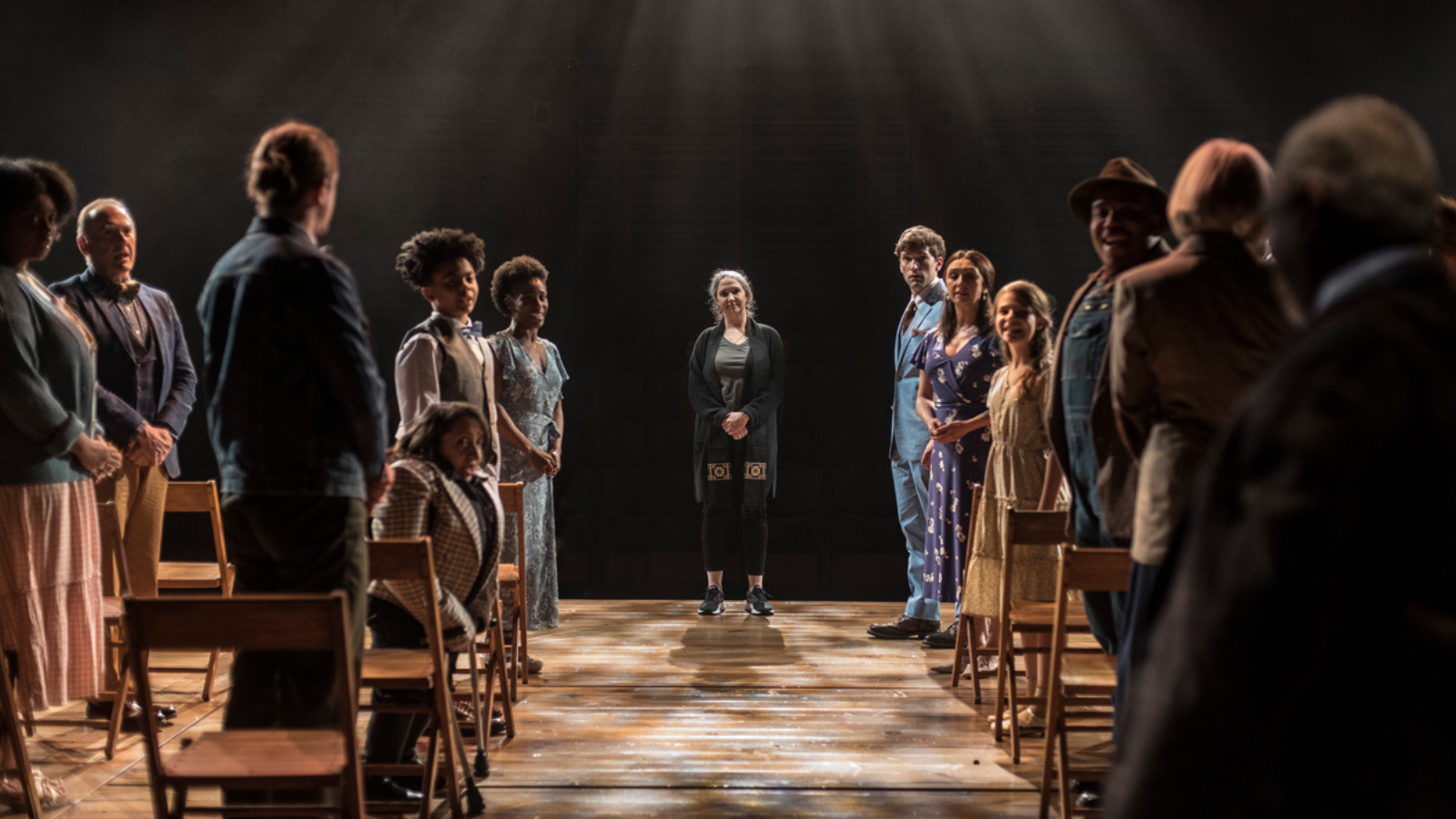 The company of Our Town | Photo: Teresa Castracane

When you hear that a production of Our Town is being produced near you, you may either burst with elation or instinctively groan.

Thornton Wilder’s 1938 Pulitzer-Prize winning play is a vivid snapshot of lives, loves, and deaths in the small town of Grover’s Corners, New Hampshire at the start of the 20th century. But Our Town might also be the victim of too much praise, leaving it a bifurcated legacy. The play is revered as so influential, so famous, so produced, so meaningful, that despite its thorough canonization it’s often treated as old-hat. For example, the play was never taught to me in either high school or in college. My teachers all probably assumed the play was already taught to me, and so Our Town was inadvertently lost in my education, cast aside as important but also redundant.

Nowadays, Wilder is having a moment in the theatre industry (as improbable as it sounds 47 years after his death). Lincoln Center Theater’s revival of his other Pulitzer Prize-winning work, The Skin of Our Teeth, is a critical darling, and is currently up for six Tony nominations. Although academics and playwrights have been re-evaluating Wilder’s work for years, the public is now in on the gig as well. Critics may have historically dismissed Wilder as quaint and sentimental since his start as a playwright. But with the apocalyptic The Skin of Our Teeth rattling New York, Wilder’s reputation as a daring playwright is steadily gaining traction.

Perhaps we may also recognize Our Town’s radicalism too, now that a sparkling new production of the show has arrived in D.C.’s Shakespeare Theatre Company (STC). STC is known for modernizing iconic stories in order to mine new meaning out of the classics. Here, they conjure a significant parallelism between Our Town’s text and its reputation. Just like Our Town questions what matters in life, this production of Our Town also asks what theater matters to the world right now. STC then convincingly proposes Wilder’s play as a delicate, transfixing, and vital answer.

In the show’s opening, a Stage Manager (Holly Twyford) lays out the scene directly to the audience. She describes a rural hamlet with incredible sensory detail, but per Wilder’s instructions, there’s “no scenery,” leading us to only fully realize the town in our minds. Still, scenic designer Wilson Chin (known for doing Broadway’s Pass Over set) has ingeniously transformed STC’s Sidney Harman Hall into a space of communal testimony. He’s created a theater in the round, with wooden beams hanging above recalling a church, a barn, and somehow the heavens.

Our Town is a play in three acts, each one tracing a day-in-the-life of New Hampshire’s small town residents. It’s a true ensemble piece, so even though when I attended opening night six understudies were on, their presence rang true to the play’s message of collective striving. The first act gives an anthropological look at the town, focusing especially on two neighbor families: the Webbs (led by Felicia Curry and in my performance Elliot Dash) and the Gibbs (led by Natascia Diaz and in my performance Todd Scofield). The second act is an intimate love story between the two of the Webb and Gibb children coming of age: George Gibbs (Jake Loewenthal) and Emily Webb (Chinna Palmer). The third act takes place ten years in the future, serving as an eerie meditation on death and the painful dramatic irony of watching our younger selves.

Our Town may have a pastoral sensibility, but its staging and message are mind-bendingly cosmic. The play is really a philosophical argument hidden in plain sight. By capturing the seemingly insignificant moments of ordinary American life, Wilder is democratizing what makes a life matter, what makes life worth living at all. By putting these moments on a nearly bare stage, Wilder is also challenging his production team and audience to translate the experiences onstage into our own lives: the play is a broad outline in which we fill in our personal details.

The cast of this production of Our Town is so chock-full of veteran actors from the area it may as well be called “Washington D.C. All Stars.” Particularly impressive are the women in the cast. Twyford brings a matter-of-factness and kindness to her Stage Manager, who keeps the action onstage moving but also generously watches other actors from slightly off-stage. As Mrs. Gibbs, Diaz is able to move between sullenness and humor perfectly, and offers an incandescent but restrained performance in the third act. And Chinna Palmer is clearly a star on the rise, as unforgettable here as she was in Woolly Mammoth Theatre’s 2019 production of Fairview. Playful, exuberant, and earnest, Palmer practically embodies the spirit of youth, and it’s incredible to watch.

The rest of the production team, and director Alan Paul, sometimes struggle to keep up with the sheer glory of their cast. The play’s third act is probably its best directed; a pale blue aura emanates off the stage, reminding me of the direct line to be traced from this show to Paula Vogel’s Indecent. But I wonder if some of the scenic elements, especially the summery guitars which punctuate “important” moments of the text, sometimes run counter to Wilder’s goal of letting the audience decide what is important for themselves.

I also struggled with the decision to make the Webb family Black, because despite the pleasure of watching Black actors onstage, the choice amounts to little more than colorblind casting. This casting dilemma is a constant trend at both STC and D.C.’s Arena Stage. Although both theatre companies want to “update” and find new meanings in classic works, they often won’t go so far as to adapt, alter, or rewrite any of their plays’ sacred texts. This puts actors of color in their productions in an uncomfortable position, as they attempt to show their full selves onstage in characters not written with their full selves in mind.

Revivals don’t always have to be this way. Black playwright Branden Jacobs-Jenkins helped reshape Broadway’s The Skin of Our Teeth in order to follow a specifically Black family. Unfortunately, the same has not been done here.

This leads to some awkward moments in the production. For example, why would Dr. Gibbs, if he is Black, have such a congenial relationship with the police officer Constable Warren, if he is white? When an interracial couple mimes “jumping the broom” at their wedding ceremony in the second act, I wondered if an entire community in 1904 would really be ready to embrace the couple 63 years before Loving v. Virginia. True, casting must adapt with the times (it was only in 1976 that a woman first played the role of the Stage Manager). But Our Town’s power was always to use the cultural specificity of the early 20th century to create a deeper allegory. When STC starts to mess with historical revisionism in the time period without actually changing Our Town’s script, the allegory starts to falter, too.

Still, there are some fascinating reasons to stage Our Town in 2022, as this production illuminates. The show’s anthropological look at America brushes up against histories of indigineity, slavery, and social justice. At a time when statues are being taken down and the sins of this country are finally being acknowledged, this fundamentally American play does still have room for a critique of America. Director Alan Paul mines the script for these moments of reckoning, and allows them to meaningfully linger with the actors.

Those moments of national introspection, along with a cast of some of the best actors in the D.C. area, are enough to convince me that Our Town really is a show that must be seen today. But the same might not be the same for you. Just like Wilder is democratizing what matters in life, I too want to democratize what may matter in the theatre. D.C. audiences, don’t automatically burst with elation or groan when I tell you to go see Our Town. See it for yourself, and discover the flaws, resonances, and at times aching beauties of this production firsthand. Wilder would want it that way.

‍Our Town is in production at D.C.’s Shakespeare Theatre Company through June 11. For tickets and more information, visit here.