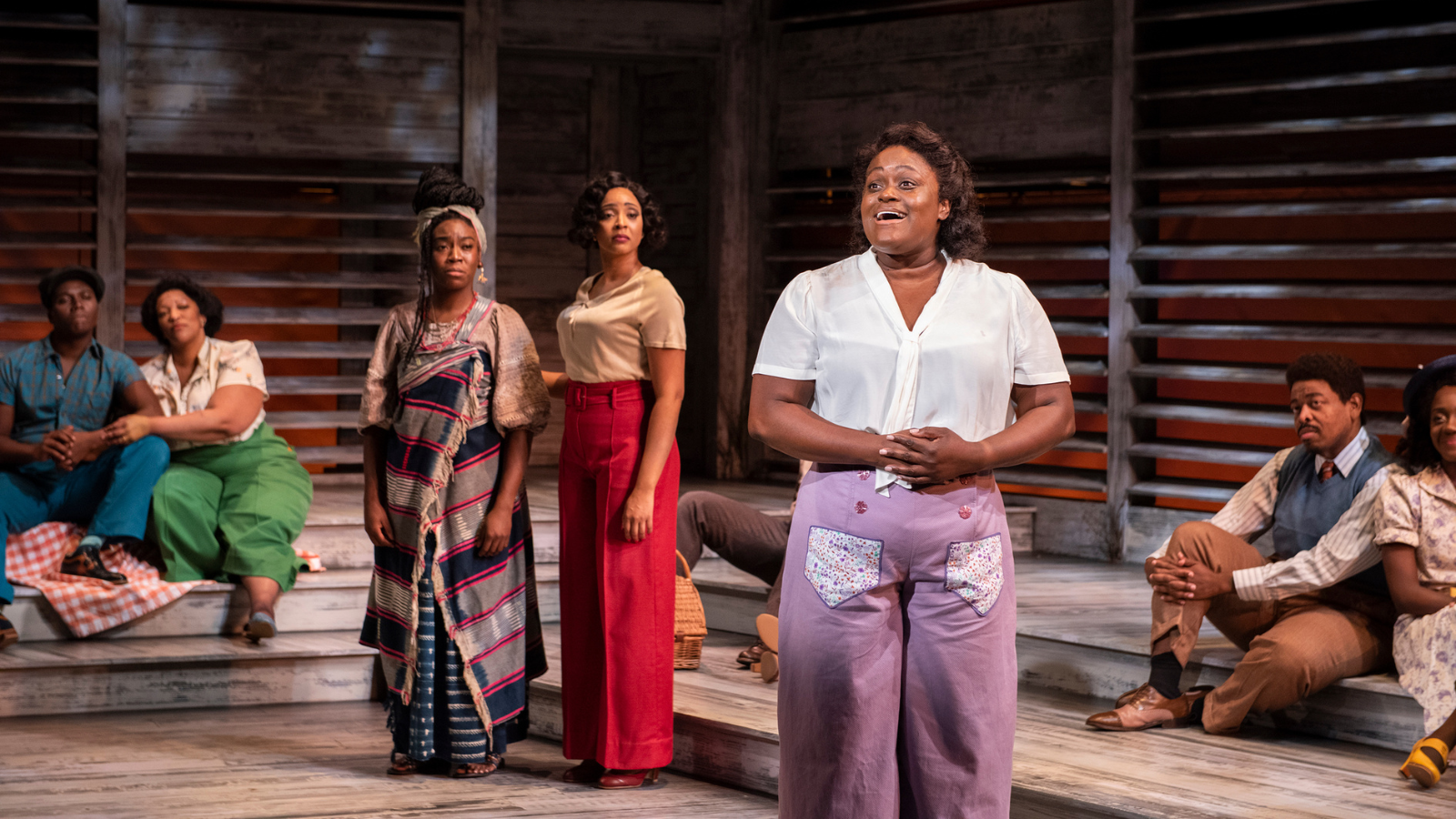 Nova Y. Payton and the cast of The Color Purple | Photo: Margot Schulman

There’s simply no singular version of The Color Purple anymore. The story that The Color Purple tells—that of Celie, a Black woman in the American South at the start of the 20th century navigating abuse, resilience, sexuality, and spirituality—has had such an immense cultural impact that it’s been told and retold over and over again. Writer Alice Walker is the mother of the tale, publishing it as an epistolary novel in 1982. Steven Spielberg then adapted the novel into a sumptuous 1985 film, followed by a musical adaptation that ran on Broadway in 2005 and 2015. A new film adaptation of the musical starring R&B singer Fantasia is coming up, too.

With over 40 years of history behind it, each new version of The Color Purple can no longer be read or seen in isolation. This intertextuality is the key to the overwhelming strengths (and occasional pitfalls) of Signature Theatre’s musical production of The Color Purple now running at Arlington, Virginia, just outside of Washington, D.C. This staging knowingly embraces the many iterations of The Color Purple that have preceded it, bringing warmth, over-familiarity, and community.

The musical starts with Celie (Nova Y. Payton) silently walking onto the stage, which scenic designer Tony Cisek has created to look like a stripped-down clapboard house, washed out of any meaningful color except a sole vibrant purple flower resting on a chair. The opening, at least on paper, is horrifying. Celie is a lonely child, continually raped by her father (Keenan McCarter), forced to give birth to children she presumes are killed, and all but sold into marriage to the equally abusive Mister (Torrey Linder).

However, the songs in this musical tell a different story. Full of gospel devotionals that bring the house down, playful banter between Celie and her sister Nettie (Kaiyla Gross), and comedic asides led by a trio of hilarious holier-than-thou women (Jalisa Williams, Yewande Odetoyinbo, and Nia Savoy-Dock), The Color Purple as a musical practically turns the audience into a church congregation. Some of Walker’s harrowing intimacy with readers of the novel is lost in translation. However, the music goes a long way towards drawing in audience members who might not otherwise watch a story featuring soul-crushing oppression.

‍The Color Purple takes place across multiple decades, over which Celie starts gaining self-respect and agency through her connection with other women. There’s the confident Sofia (Frenchie Davis), a woman who refuses to let her husband Harpo (Solomon Parker III) beat her, and refuses to kowtow to gender or racial norms. There’s also Shug Avery (Danielle J. Summons), an alcohol-drenched singer who eventually forms a deeply physical connection with Celie, and the return of Nettie in a surprising way. All the while Celie is slowly, cautiously, and beautifully forging a life for herself that finally feels like her own.

The cast of this Signature Theatre production is, across the board, stupendous. Leading the charge is Nova Y. Payton as Celie, who at first paradoxically commands the stage with her smallness, before that feebleness bleeds into indignation, rage, and acceptance. Payton embodies this entire journey on her face, so even when key moments have been cut from the show (I suppose COVID-19 precautions had something to do with a missing spit scene), we can trace Celie’s journey of discovery. The supporting players deliver great performances as well. As Sofia, Davis delivers a rousing “Hell No!” number, and nails the comedy necessary to keep the show moving through its darker stretches. As Shug, Summons knows how to embody a sultry sexuality, and also how to wink and point out the performance of sex as well.

Try as they might, this cast can’t quite resolve some of the tensions inherent in the musical’s script, which still retains a 2005 sensibility in terms of what it’s willing to show onstage. While Celie has a fantastic anthem of self-love towards the end of the show, the depths of her pain at the start of the show remain curiously undramatized. I always wish Celie could borrow a song from Caroline, or Change to express her true sorrow.

Even more tricky is how the musical’s script stages queerness. Steven Spielberg infamously avoided including scenes of explicit queer sexuality in his film, and that skittishness continues in the musical. Director Timothy Douglas tackles what does remain in the script with sensitivity and grace, drawing out the sensual and sexual in lyrics that stay at the romantic. He’s aided by Peter Maradudin’s stunning light design, which reminded me of a line from Audre Lorde’s essay “Uses of the Erotic:” “And there is, for me, no difference between writing a good poem and moving into sunlight against the body of a women I love.” In this production, we get the movement of bodies in the sunlight. It’s just a shame that Marsha Norman’s script for this musical doesn’t properly give the poetry for these scenes as well.

Despite the musical’s shortcomings, Signature Theatre’s production of The Color Purple more than justifies this story being told yet again. Recently, The Color Purple has been something of an easy cultural punching bag within segments of the Black community. It’s a piece of art so beloved, so often quoted, so well-known that Black queer artists like Michael R. Jackson (A Strange Loop) and Jordan E. Cooper (Ain’t No Mo’) can joke about the ways the Black women in their lives have passed this story onto them again and again.

It will take searching, intelligent, and thoughtful retellings of The Color Purple, like the one seen at Signature Theatre, for the next generation to understand the power of this story in the first place. In her essay “In Search of Our Mothers’ Gardens,” Alice Walker writes, “...our mothers and grandmothers have, more often than not anonymously, handed on the creative spark, the seed of the flower they themselves never hoped to see...” For so many Black families, The Color Purple is the seed passed between generations. It would be a shame if we didn’t take care of it, and let it blossom once more. Who knows what—or who—might grow beside it.

‍The Color Purple is in performance at Arlington, VA’s Signature Theatre through October 9. For tickets and more information, visit here.