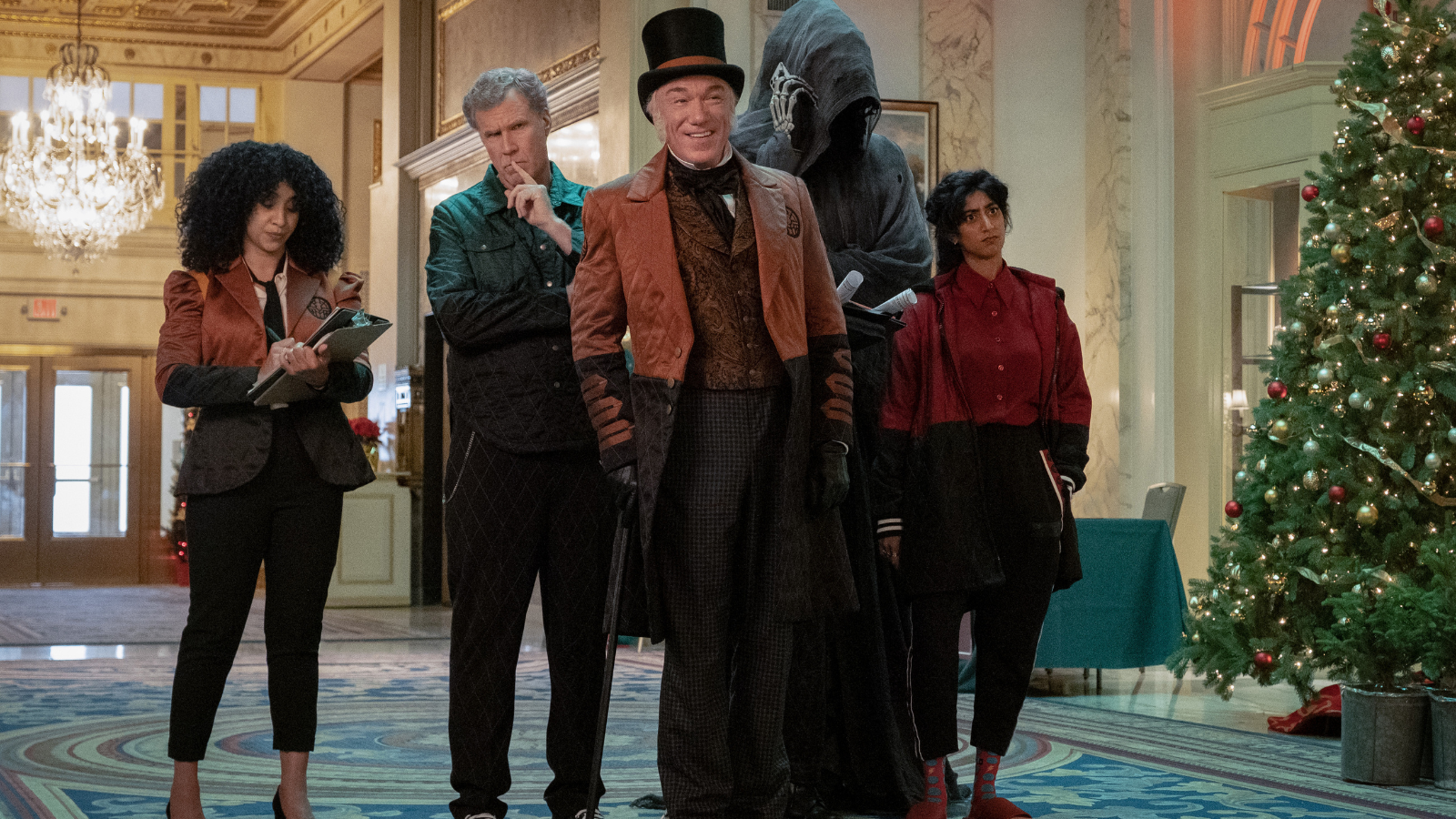 With the winter season fast approaching, 2022 is offering a slew of holiday movies to enjoy. One of the starriest, big-budget films is Spirited, a movie musical take on A Christmas Carol—with songs by Pasek & Paul, no less.

The movie flips the script on the story, telling the Dickensian tale from the point of views of the specters who haunt a Scrooge-like modern day businessman (Ryan Reynolds). As with the Ghosts of Christmas Past (Sunita Mani), Present (Will Ferrell), and Future (voiced by Tracy Morgan), there’s another character A Christmas Carol fans will surely recognize: Jacob Marley.

This time around, his role has been expanded to put him in charge of the hauntings. Think Santa’s Workshop but everyone is spending 364 days of the year finding ugly souls and preparing to change them into better humans on Christmas night.

Thankfully, Marley is played by none other than Broadway favorite and Hadestown Tony nominee Patrick Page. It’s a meaty role for someone like Page, who gets to be exasperated at every turn (just check out the clip below) and still add new depth to a well-known story.

“I love the character,” says Page. Thanks to a carefully crafted script by director Sean Anders and co-writer John Morris, the actor was able to jump right in without hesitation. It was a collaborative environment for everyone involved, too.

“I just dearly loved working with Will [Ferrell] and Ryan [Reynolds]. They’re both so responsive and flexible and available in terms of having them as an acting partner. That was just a joy and I learned a lot from them.” It went vice-versa with Page talking to Ferrell about musical theatre—especially Pasek and Paul—in between takes.

In the musical number “Do a Little Good,” Page was feeling like it didn’t make sense that his character would be dancing in the street with the rest of the cast. “It was somewhat silly given who Marley was. He is the person who’s always exasperated with the musical numbers. [We] kind of realized this on the night we were shooting, so Sean [Anders] put me on top of a city bus.”

As to be expected from having a Broadway star in a movie musical, his favorite moment while on set came sometime in the dark hours. “I’m a theater baby, I’m great with being up all night…it’s my time of day. So, it’s 3 or 4 AM in the morning, I’m in full Dickensian garb presiding over this massive [parade of] 100 dancers on the streets and I thought, ‘Well, it doesn’t get any better than this.’”

Page’s own love for the holidays on screen started long ago, watching the 1970 Albert Finney-led musical Scrooge on TV. “I devoured it. I watched it probably every time it showed, so four or five or six times a year. We’re going back to the good old days when you actually had to watch something when it was on TV, you couldn't just pull it up [on streaming].” He’s also a big fan of A Charlie Brown Christmas, Dr. Seuss’ How the Grinch Stole Christmas (the animated 1966 version narrated by Boris Karloff, whose voice is a deep bass like Page), and It’s a Wonderful Life.

Now, he hopes Spirited will be added to the long list of Christmas films that get rewatched annually. Perhaps he’ll do that next year, with his wife Paige Davis, as they light a menorah, decorate a Christmas tree, and open presents on New Year’s Eve. Their own traditions matching the new way of exploring a classic, just like the movie.