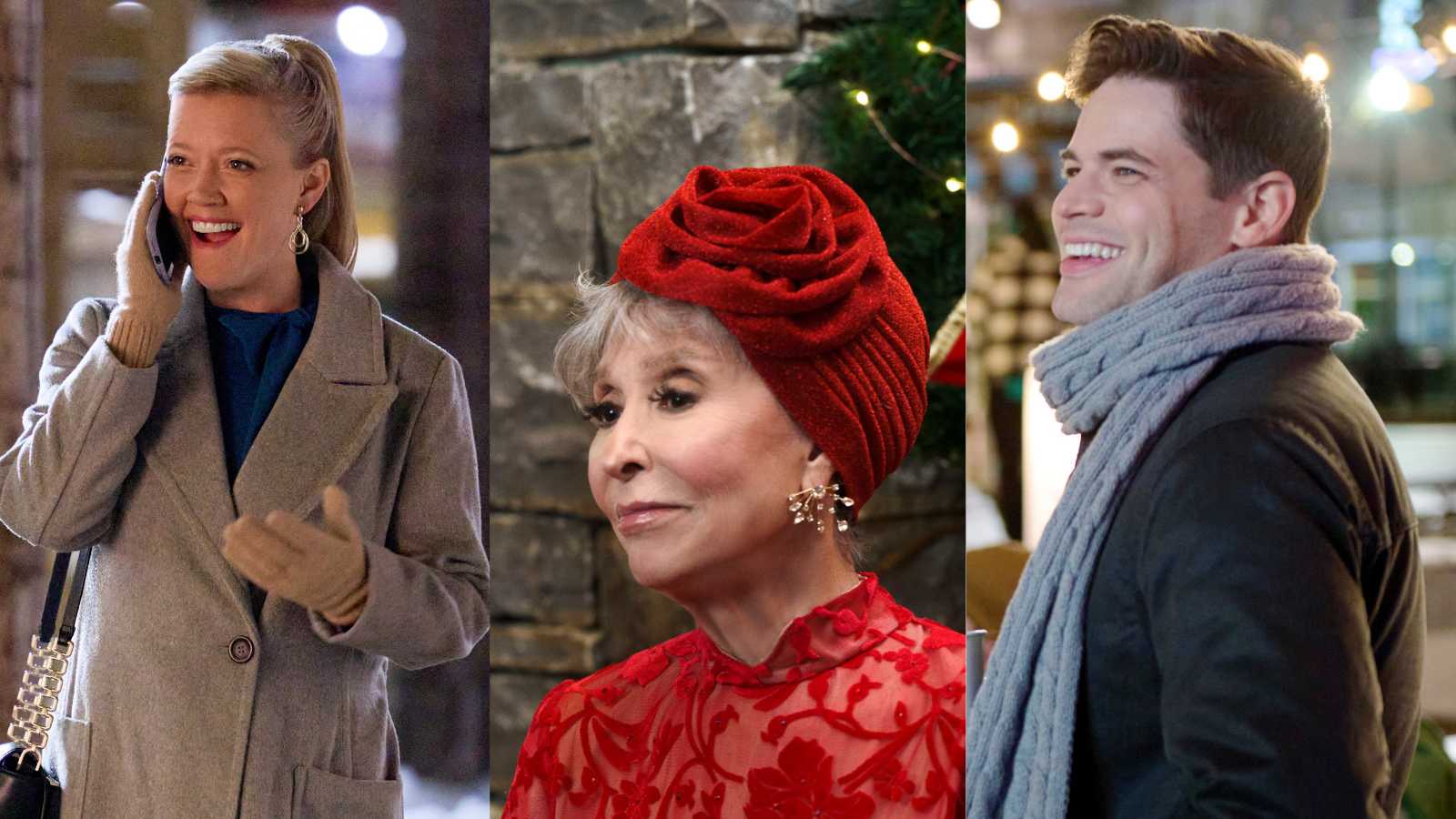 ‘Tis the season for our favorite Broadway celebrities to appear on our screens amid a backdrop of snowy mountain landscapes, romantic sleigh rides, and steaming cups of hot cocoa. While one could argue the official start of the holiday season, Hallmark, Netflix, Lifetime, and so many others are already unleashing a marathon of movies and TV to enjoy while snuggled up on the couch.

Read on for the who, what, when, and where. (You already know the why: because the holidays are here!)

These celebrities are the leads of their very own holiday movies!

In Merry Measure - Patti Murin (Nov 11, Hallmark at 8 PM)
The Frozen alum plays Darcy, a pop star who—what else?—returns home to spend Christmas with her family. Things get spicy when she is forced to coach the local choir with her high school rival, Adam.

‍Spirited - Ryan Reynolds, Will Ferrell (Nov 11 in theatres, Nov 18 on Apple TV+)
Look, I don’t know when the embargo is for this movie, so I don’t know how much I can say, but y’all are not ready. The music—from Pasek & Paul!—is incredible (who knew Reynolds and Ferrell could sing that well?!), Hadestown favorite Patrick Page is hilarious as an exasperated Marley, and there’s some real toe-tapping ensemble dance numbers that make this one of the best big-budget holiday productions in a long time. Check out the trailer here.

‍Santa Bootcamp - Rita Moreno, Marissa Jaret Winokur (Nov 19, Lifetime at 8 PM)
For the first time ever, an EGOT will be starring in a Lifetime movie and there’s really no better candidate than the gift that is Rita Moreno. The West Side Story star plays a drill sergeant for a camp where people train to be mall Santas. I don’t know if I want to go to Santa Boot Camp, but I do know that I would let Rita Moreno yell at me for the rest of my life. Can you imagine? Bliss. Also, I’m not sure who Hairspray Tony winner Marissa Jaret Winokur is playing, but I’m happy she’s here.

‍Stepping into the Holiday - Mario Lopez (Nov 25, Lifetime at 8 PM)
Meta alert! The Broadway star plays Billy, a Broadway star turned TV judge-hot-producer; well, until he’s fired. After coming home with the proverbial tail between his legs, Billy takes his talented niece to a dance recital where he meets the studio owner who’s looking for a big draw to the holiday season fundraise. Whaddyaknow! Billy is a celebrity — he can bring in the big bucks, right? Plenty of chaos and dance ensues. Props to Lifetime for also snagging Cheri Oteri and Mario Cantone for what are sure to be hilarious bit roles.

‍Dolly Parton’s Magic Mountain Christmas - Ana Gastayer (Dec 1, NBC)
The patron saint of everything sugar and spice, Miss Dolly is bringing holiday cheer with this original story. As the singer prepares for a Christmas TV special, she realizes a dejected world needs the magical powers found in the mountains that keep Dollywood so happy. She sets out on a journey to spread joy, and along the way finds a cast of characters played by Jimmy Fallon, Miley and Billy Ray Cyrus, and even Wicked and SNL alum Ana Gasteyer.

‍Fit for Christmas - Amanda Kloots (Dec 4, CBS at 8:30 PM)
Anyone who’s ever run a holiday 5K knows: you can’t forget your antlers! Kloots, whose credits include Follies and Bullets Over Broadway, plays a Christmas-obsessed fitness instructor. When a handsome man comes to town to turn the local rec center into a resort, she must choose between romance and community.

‍A Christmas to Treasure - Kyle Dean Massey, Taylor Frey (Dec 16, Lifetime at 8 PM)
This movie has everything: real-life Broadway power couples, gay storylines, a treasure hunt, bad blood, and even a Fiyero. Massey (Wicked, Company) plays Everett, one of six high school besties who reunite for a holiday adventure. When Everett and his former best friend Austin (Taylor Frey, Massey's husband IRL, whose stage credits include Finian's Rainbow and How to Succeed...) reconnect, they realize they have more in common than they thought. Fun fact: the Broadway alums became dads last year around the holidays!

‍Hanukkah on Rye - Jeremy Jordan (Dec 18, Hallmark at 8 PM)
I always appreciate when Hallmark strays outside the realm of Christian, heteronormative storytelling. As mentioned above, the movie stars the Newsies favorite as a deli owner who finds himself matched with the girl of his dreams—only to discover she’s running the rival deli around the corner. I’d say “oh no!” but we already know how all of these movies end, right? Jordan stars opposite Yael Grobglas, who appeared on stage Beersheba Theater's production of Play It Again, Sam in Israel.

‍Broadway Gets the Holiday Treatment

Sometimes the holidays require a little theatre magic. These are the movies that will feature theatre within the storyline.

‍A Show-Stopping Christmas (Nov 20, Lifetime at 8 PM)
‍When the Scrooge-like owner of the theatre in Western Massachusetts decides to sell the property, artistic director Riley must do everything she can to keep the doors open—including summoning ghosts. Meanwhile, a TV star cast in the theatre’s actual production of A Christmas Carol proves a romantic foil to Riley.

The Hip-Hop Nutcracker (Nov 25, Disney+)
‍This new take on the classic ballet cast a slew of So You Think You Can Dance alums, so you know the talent is going to be top-notch. I’m not sure what the music will be like, but the trailer seems to suggest that it might be the perfect combo of Tchaikovsky’s score and a more modern era of sound. Plus, expect cameos from NYCB principal Tiler Peck and Mikhail Baryshnikov!

‍A Holiday Spectacular (Nov 27, Hallmark at 8 PM)
In a past life, I must’ve been a Rockette—there is truly very little I love more than a kick line. Hence my delight in discovering there will be holiday movie revolving around the Radio City Christmas Specactular! On top of that, it features the great Ann-Margaret and current Moulin Rouge! The Musical star Derek Klena. High kicks all around!

‍This Was Just a Moment in The Woods–Holiday Edition

These movies star someone with several stage credits or awards to their name but don’t feature prominently in the movie and vice versa (the stars have one or two stage credits).

All I Didn’t Want for Christmas - Loretta Devine (December 7, VH1 at 8 PM)

Mostly because you need to see what Tituss Burgess is doing‍

Best in Snow -  Tituss Burgess (November 18, Disney+)
This one-off special features the Tony nominee dressed as the mayor of a quasi-Whoville-type town and that’s really all I need to know. Oh, it’s about building snow sculptures, too! I guess that’s important.

‍Three Pines - Alfred Molina (December 2, Amazon Prime Video)
‍This one’s for the adults in the room. Set around the holidays in an idyllic Quebecois village, the three-time Tony nominee plays Inspector Armand Gamache (yes, from the books by Louise Penny) as he tries to solve a series of murders.

‍‍I’m not going to lie to you: this section is solely about me finding a way to tell you that the Lindsay Lohan comeback begins in less than a week.

‍‍Falling for Christmas - Lindsay Lohan (Nov 10, Netflix)
‍When a spoiled heiress ends up with amnesia after a nasty skiing accident, she’s left to put the pieces of her life back together to find her way back home. Thankfully, she’s got Glee alum Chord Overstreet, playing a single dad with an adorable daughter, on her side! Watch the trailer here.

‍The Holiday Sitter - Jonathan Bennett (Dec 11, Hallmark at 8 PM)
‍The star who always looks sexy with his hair pushed back will star in the network’s first-ever holiday movie actually led by a gay couple. Woot, let’s go, gays! (Bennett previously starred in Hallmark’s first film with LGBTQ+ characters in The Christmas House, which is absolutely worth a rewatch).

‍Haul Out the Holly - Lacey Chabert (Nov 26, Hallmark at 8 PM)
‍This star has ruled as Queen of Hallmark Movies for some years now and there’s no sign of her slowing down with this one. Pay a royal tribute to the monarch with some toaster strudels while you watch.

‍*gasps for air* why are there so many things happening this season?

‍‍Elton John Live: Farewell From Dodger Stadium (November 20, Disney+)
‍We’re not sure if the The Pinball Wizard is going to be doing any holiday ditties, but keep an eye out for any moments from his work on Broadway. He wrote the music for The Lion King, Aida, and Billy Elliott.

‍The 96th Annual Macy’s Thanksgiving Day Parade (November 24, NBC & CBS at 9 AM)
This year’s lineup on the Peacock network include A Beautiful Noise, Some Like It Hot, Funny Girl, and The Lion King. Over on CBS, Moulin Rouge! and Six will perform.

‍Christmas at Rockefeller Center (Nov 30, NBC at 8 PM)
The most spectacular Christmas Tree ceremony once again lights up New York City. While the 2022 line up has yet to be announced, it usually features the Rockettes, one or two Broadway casts (last year was Come From Away), and some of today’s hottest recording artists. UPDATE (11/18): This year will include performances by Alicia Keys, The Shindellas, the muppets of Sesame Street, and Gwen Stefani.

‍Matt Rogers: Have You Heard of Christmas? (Dec 2, Showtime)
Filmed at Joe’s Pub earlier this year, the Fire Island star brings mischief and sex appeal to a musical holiday special all his own.

‍Idina Menzel: Which Way to the Stage? (December 9, Disney+)
While technically not a holiday special, it is a gift! The documentary follows the Rent original Broadway cast member and Wicked Tony winner as she prepares to headline a concert at Madison Square Garden.

‍Christmas with The Tabernacle Choir featuring Megan Hilty (December 13, PBS)
If you’ve never seen one of these concerts before, you’re in a for a real treat. Hilty will be backed by nearly 300 singers as she goes down the list of holiday classics. The concert was filmed last year during the holiday season, with Tony winner Lea Salonga heading to Salt Lake City to tape a concert that will air in 2023.

‍Beauty and the Beast: Live (December 15, ABC at 8 PM)
This star-studded take will feature live performances spliced into the beloved Diseny animated movie. H.E.R. is set to play Belle with Josh Groban (soon to be seen on Broadway in Sweeney Todd) as the Beast, Joshua Henry as Gaston, Martin Short as Lumière, David Alan Grier as Cogsworth, and Shania Twain as Mrs. Potts.

‍Disney Parks Magical Christmas Day Parade (December 25, ABC at 10 AM)
‍Wake up on Christmas morning to watch the annual parade through Disneyland, Disney World, and the international parks. Lineup TBD.