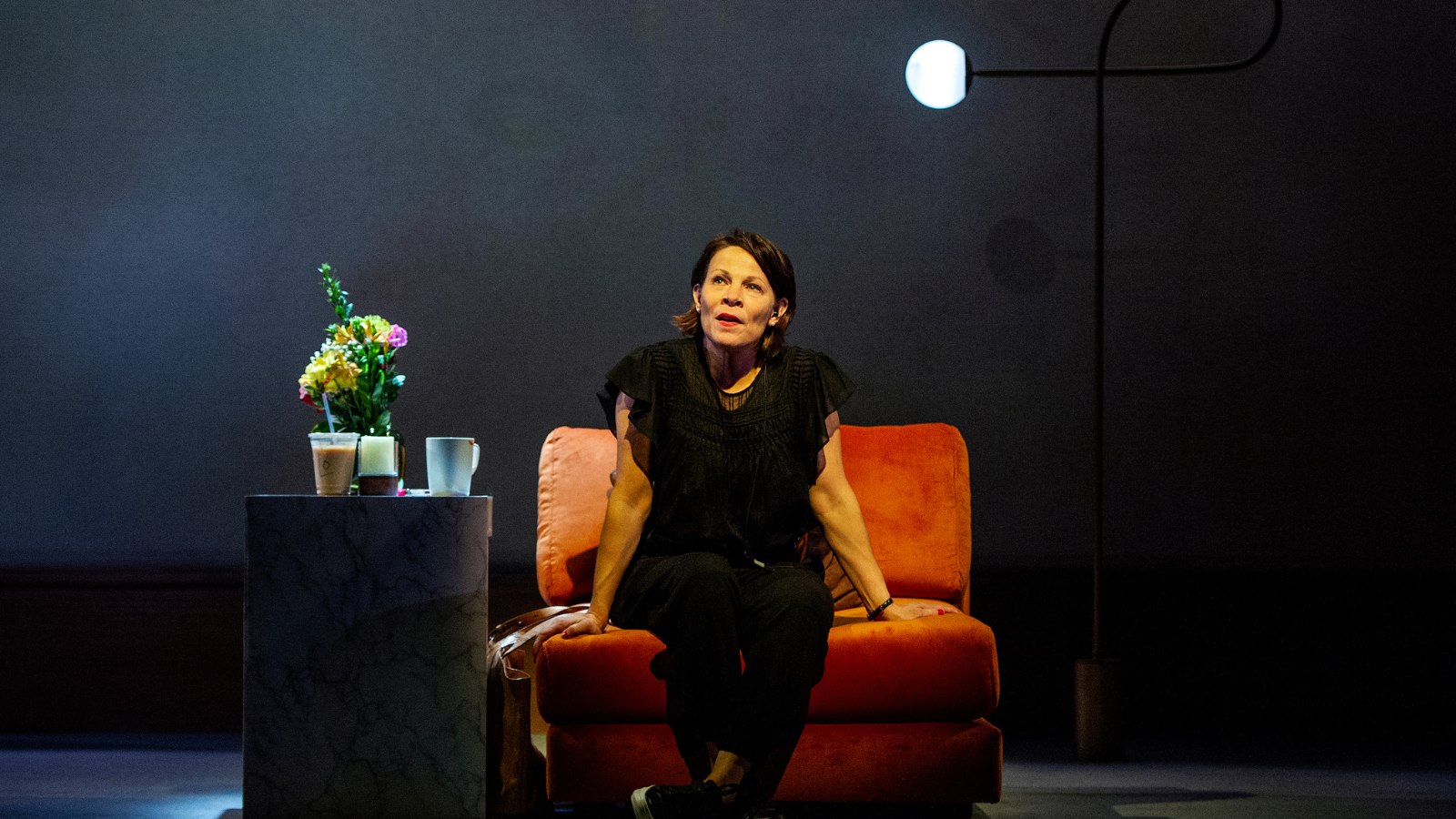 You have to feel bad for the sole character in The Fever, Wallace Shawn’s 1990 monologue which just opened in a new production starring Lili Taylor at the Audible Theatre at Minetta Lane Theatre. The only thing worse than spending a night with your head in a porcelain bowl is doing so with a troubled mind, terminally regretful of every single thing you did to wind up here. Maybe you even start thinking about the state of the world, paralleling your own face-down demise to larger, global themes. The difference between such nights and this one-act performance, though, is that one is usually content to grab the toothpaste and move on.

Taylor-as-Shawn-as-protagonist is experiencing a strange malaise in her hotel room in a foreign country she is visiting. Coming to terms with the realization that her privilege as an American traveler sets her life apart from, say, the local hotel maid has sent her into an existential tailspin, and so she must tell us all about it. She read Marx’s Capital not too long ago, you see, and vibed with a lot of its ideas, but is still experiencing a crisis of cognitive dissonance.

Staged as a generic armchair and lamp by Arnulfo Maldonado to represent the apex of characterless traveler liminality and handsomely lit by Cha See’s lighting, which often delves into German expressionism, the work has Kafka in mind. Like one of his preordained protagonists, the traveler is facing their existential abyss head-on, dizzy from the height. What’s missing is the critical distance, the omniscient narrator who can plunge us into this hell by dipping into the character’s psyche, while offering the cold detachment of an uncaring god. What Shawn’s work provides, instead, is the torturous opportunity to spend almost two hours inside such a mind, with little returns and exhausting repetition.

Director Scott Elliott does not do much with Taylor; not that this is the sort of work that demands strutting and fretting, but leaving his lead seated for the first 45-or-so minutes of the performance seems intentionally punishing. And Taylor, though solid and intermittently great, is not giving the kind of performance that grips you even from the (dis)comfort of her chair, rarely changing her tone or showing particular enthusiasm or content for any of her character’s many, many thoughts. And yet again, Taylor does not have that great of material to work with, as Shawn beats the already-dead horse of 21st century optimism in ways that even Marx would’ve found repetitive.

But then, I am merely handing down blame, passing on judgment, as The Fever’s protagonist predicted I would. ‘There is no ethical consumption under capitalism,’ the phrase goes, but neither is there productive catharsis under Liberal navel-gazing.

The Fever is in performances at the Audible Theatre at Minetta Lane Theatre. For tickets and more information click here.