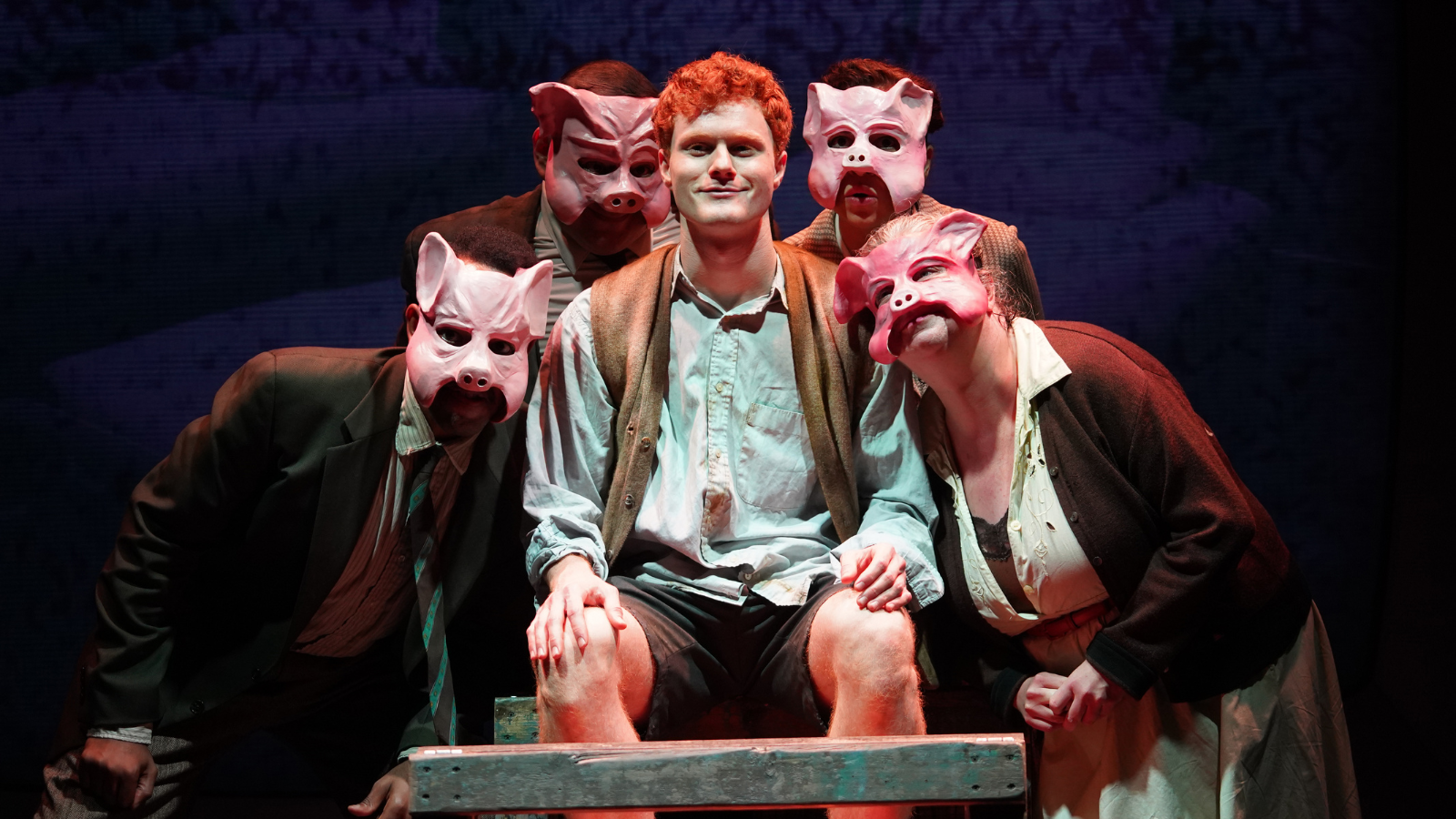 Nicholas Barasch (center) and the cast of The Butcher Boy | Photo: Carol Rosegg

A strange and beguiling work, Irish Rep’s new musical The Butcher Boy is a big ol’ mess—but when it works, this dark piece captures a disturbed mind’s gradual collapse with frightening precision.

Based on the 1992 novel by Patrick McCabe, and adapted here by Asher Muldoon, The Butcher Boy follows the youthful adventures of Francie Brady (Nicholas Barasch), a boy growing up in a small Irish village in the 1960s. Francie has a tough lot: his cruel father is a drunk; his beloved mother is unstable, and eventually commits suicide.

Francie escapes his traumatic life through journeys with his best friend Joe, and elaborate flights of fancy inspired by his favorite comic books. But the arrival of middle-class neighbor Mrs. Nugent and her uptight son Phillip disrupts his routines. When Mrs. Nugent refers to Francie’s family as “pigs,” the jibe sets off new, more violent imaginings in Francie’s mind.

Barasch’s task is an immense one. As he narrates Francie’s inner monologue to the audience, he maintains a sweet innocence even as those thoughts grow more frightening. Along the way, Francie dances with pigs, falls for a Dublin girl, and chats with the Virgin Mary.

Much of Barasch’s strongest work is actually done in smaller, in-between moments. With little twitches, confused glances, and silent tears, he quietly conveys Francie’s increasing disassociation from his surroundings.

Muldoon’s book is strongest when grounded in Francie’s need for stability. Every disruption to his childhood routine feels like an earthquake—from the seemingly small, like a new neighbor, to the seismic loss of a mother. With each disruption, director Ciarán O’Reilly’s frenzied production grows more off-kilter as Francie gradually loses all sense of self.

That psychological journey loses steam whenever Muldoon shifts focus away from Francie to a supporting character—and he does this a whole lot. Though the ensemble here is terrific (especially Scott Strangland as Francie’s father, and Michele Ragusa in the dual roles of Mrs. Nugent and kindly Kathleen), and it’s nice to see each player get their moment, these side tales stop the story in its tracks every time.

That said, much of Muldoon’s strongest musical work lives in those side songs. “Don’t Forget About Me,” a love ballad shared between Francie’s uncle Alo and his hometown love Mary, is sweetly stirring. “Phillip’s Song,” Francie’s crazed imagining of Joe being stolen away by a usurping Philip, is truly unhinged and a demented delight.

The show never figures out the tricky tonal terrain of living both in reality and Francie’s imaginings. But if you can embrace the show as mostly, if not entirely, a journey through the fictions of an unstable mind, this bizarre, chaotic and wholly unique piece is an unsettling journey worth taking.