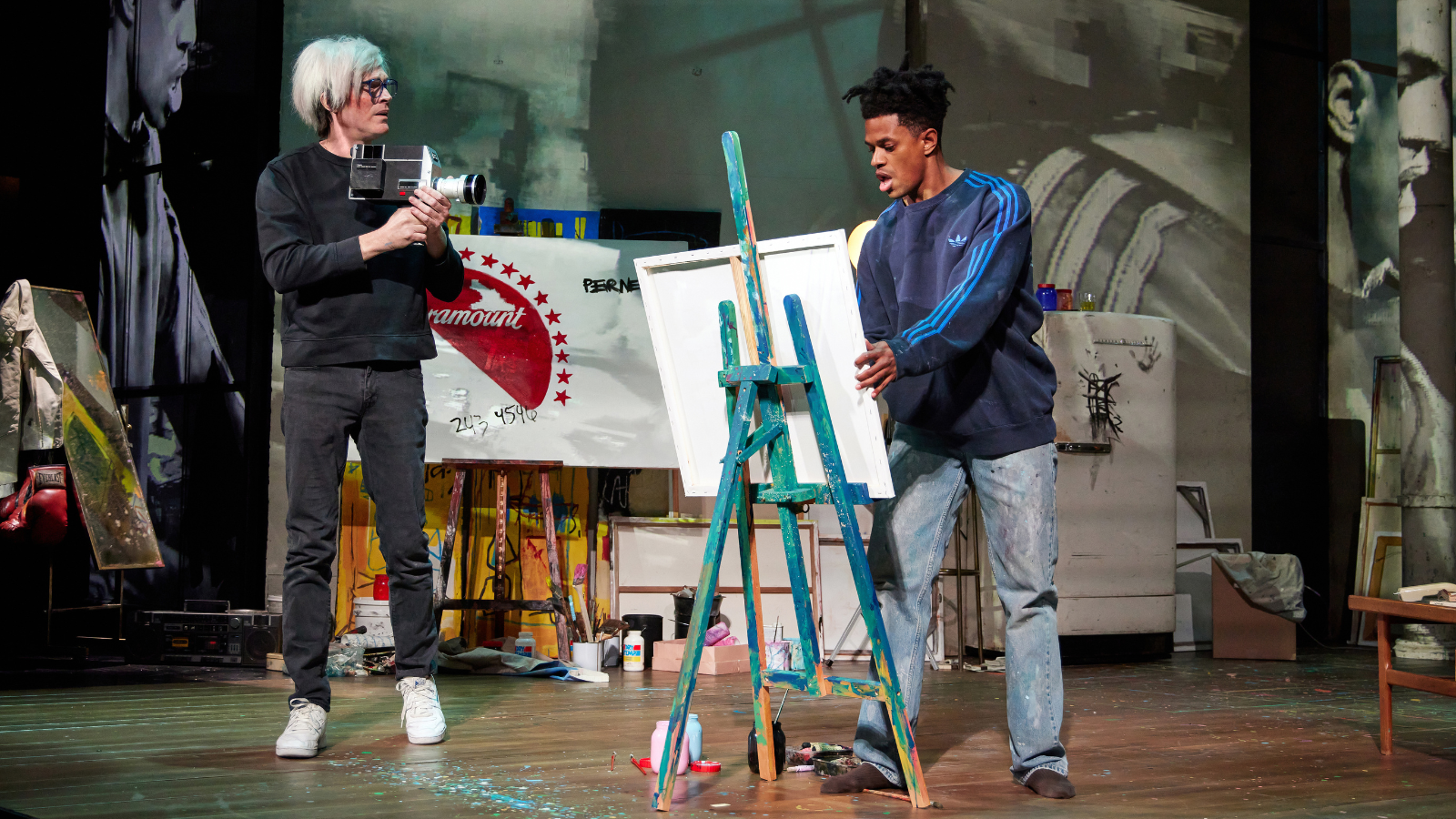 The writer Anthony McCarten has not met a Wikipedia page he could not adapt, and with shoddy screenplays for Bohemian Rhapsody, Darkest Hour, and The Theory of Everything under his belt, I’m comfortable calling him one of the most successful hacks working today. His latest play, The Collaboration, is as shallow, uninteresting, and insultingly stupid as those three, with the added offense of not allowing you to distract yourself with household chores.

The Baby’s First Art World Interaction play, now at the Friedman theatre, imagines how the studio interactions during Andy Warhol (Paul Bettany) and Jean-Michel Basquiat’s (Jeremy Pope) collaborations might have looked. Though each is hesitant to share the brush with someone of such seemingly disparate ideals, they are persuaded into working together by the Swiss art collector Bruno Bischofberger (Erik Jensen).

Why does the white-haired Pop artist love the idea of art more than art itself? According to McCarten, because he is unable to accept love, or something. Why does the dreadlocked graffitist work so feverishly? No further questions, please, but a slapdash storyline about police brutality in the second act might come close to answering it were it not so elementary Freudian. Until then, the two men merely regurgitate each other’s best known facts.

Though apparently more knowledgeable about Warhol—aren’t we all?—McCarten attempts to make the Basquiat character a vessel for his bogus rants against commercialism and the soullessness of modern art, having the younger artist press against his elder’s silkscreens and logo-ridden works. Each character is as thin as a Campbell’s soup label, but the insistence to ask these rote questions, then cop out of answering any when they turn to why the street artist himself is so comfortable with his funds is frustrating.

And poor Pope, a multitalented actor here strangled under insufferable characterization, heightened by Kwame Kwei-Armah’s juvenile direction. Despite Pope’s impressive voicework, the writer and director’s Basquiat is conceived in the tired Cool Young Artist mold, ashing his joint in Warhol’s coffee cup before going Artist As Tweaker On The Spectrum when freaking out to jazz records, and staring, slack-jawed, into space—his otherworldly artistic visions ostensibly taking him out of this realm.

Bettany, unburdened by those emotional machinations, has room to create the most compelling character possible. His mms and ahhs register as genuine questions about his surroundings rather than telegraph the aloofness we’ve come to associate with Warhol.

One has to wonder what was going on backstage at Into the Woods to understand why Krysta Rodriguez would leave one of the most unanimously celebrated revivals of all time for five minutes onstage as one of the worst written girlfriend characters in recent memory. As Basquiat’s on-off girlfriend, she comes in shrieking about an abortion and manages to aggressively throw her purse down, angry about something or other, at least three times in one scene.

The play has this going for it: a sixth grader who first visited the MoMA the day before seeing the play will likely find the men’s Art 101 conversations new and exciting. That is the level at which McCarten is operating—though, that same hypothetical student might have the good sense to not write a 2-hour play about this material—and if your engagement with Warhol, Basquiat, modern art, modern history, and commercialism starts and ends with a poster on your college roommate’s wall, you could likely do worse.

McCarten has somehow built a fruitful career for himself on the backs of much more creative people, through scripts which bank on audiences misremembering details, being unbothered to check facts (don’t look too closely at the Bohemian Rhapsody chronology), or who are just happy to see figures they once associated with art and intellect reflected back at them.

To anyone historically significant reading this, I suggest speaking to your lawyers about what preemptive action you could take before your legacy is put through the McCarten wringer.

‍The Collaboration is in performance through January 29, 2023 at the Samuel J. Friedman Theatre on West 47th Street in New York City. For tickets and more information, visit here.