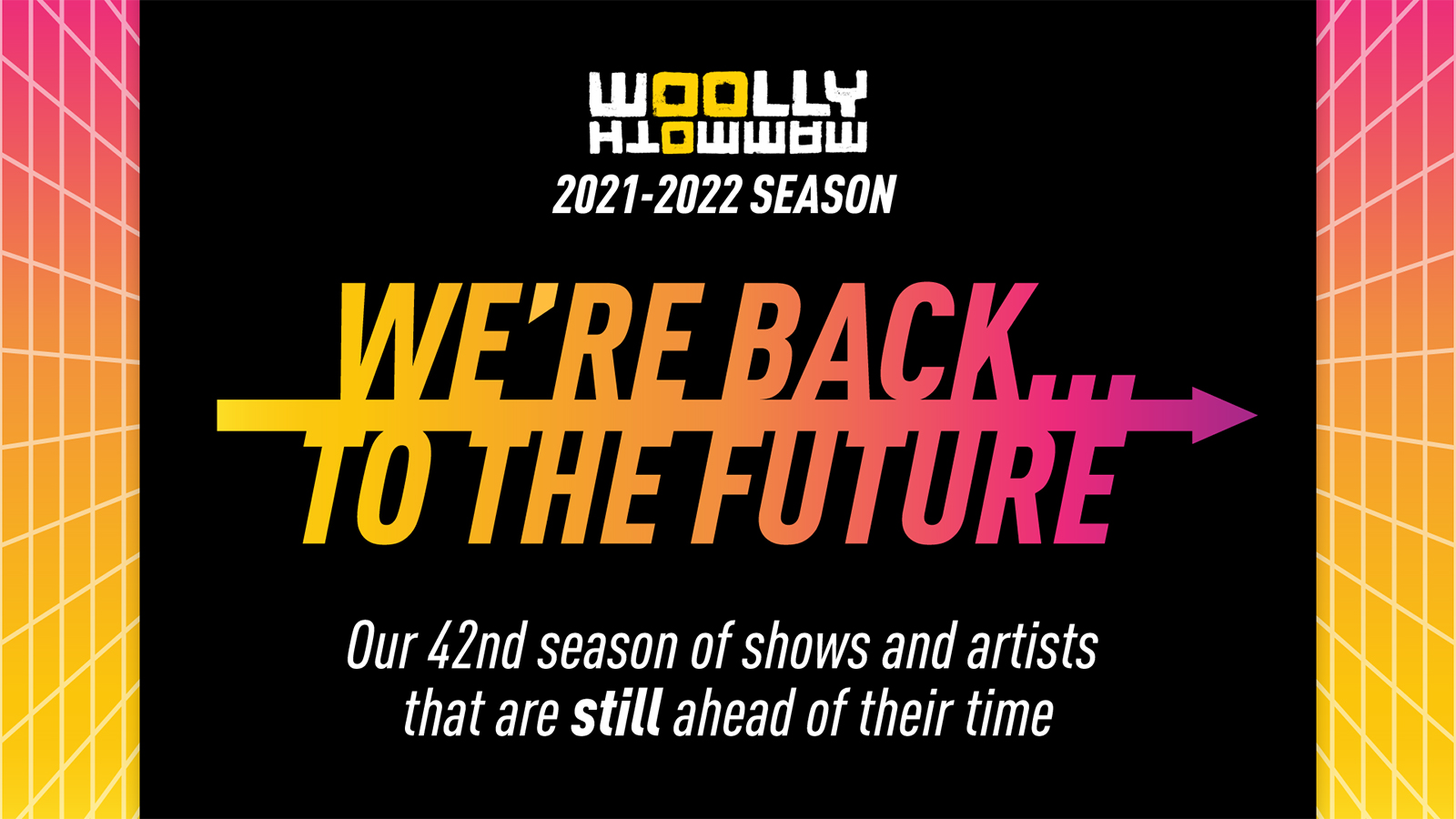 Woolly Mammoth Theatre Company is back...to the future, back to welcoming patrons into its home in Penn Quarter, and back to the magic of live performance, while acknowledging a new future must be built for a more equitable and sustainable industry. The 2021-2022 season will start to build that future in the here and now by programming previously announced projects, producing a live version of a hit streaming show, and launching a national tour.

"With gratitude, humility, and incredible excitement, Woolly is back...to the future! We are finally bringing our most eagerly anticipated projects to the DMV that we had to put on pause because of the pandemic,” says Maria Manuela Goyanes, Artistic Director. “From playwrights like Mike Lew and Pulitzer Prize-Winner Michael R. Jackson to creator/performers like Paola Lázaro, Toshi Reagon, Bernice Johnson Reagon, and Ryan J. Haddad, these artists have always been ahead of their time. Woolly's future is bright...And where we’re going, we don’t need roads.”

Season 42 kicks off with TEENAGE DICK, a modern, darkly comic re-telling of Shakespeare’s RICHARD III set in the most treacherous of places—high school. TEENAGE DICK is written by Mike Lew, directed by Moritz von Stuelpnagel, and produced in association with Huntington Theatre Company and Pasadena Playhouse. The play originated at Ma-Yi Theatre Company in association with The Public Theater. It was commissioned and developed by The Apothetae, a company dedicated to the production of works that explore and illuminate disabled experiences.

This holiday season brings the pre-Broadway production of Michael R. Jackson’s hit musical, A STRANGE LOOP, directed by Stephen Brackett, choreographed by Raja Feather Kelly, music directed by Rona Siddiqui, and produced in association with Playwrights Horizons and Page 73 Productions. A STRANGE LOOP had its World Premiere at Playwrights Horizons, produced in association with Page 73. This 2020 Pulitzer Prize winner follows a Black, queer writer writing his original musical… about a Black, queer writer writing his original musical, and is one of the first musicals in Woolly history.

In the New Year, Woolly is playing “wingman” again with IAMA Theatre Company for a live production of last year’s hit streaming show HI, ARE YOU SINGLE? by Ryan J. Haddad (Netflix’s The Politician) and directed by Laura Savia. Join Ryan, a gay man with both a high sex drive and cerebral palsy on a journey through gay bars, hookups, and lots of margaritas in search of romance. This season, Woolly will also be doing a reading of HI, ARE YOU SINGLE’s sequel, HOLD ME IN THE WATER, during the production’s run to give audiences a taste of Haddad’s evolving story.

In the spring of 2022 Toshi Reagon and Bernice Johnson Reagon’s triumphant, mesmerizing work of rare power and beauty, OCTAVIA E. BUTLER’S PARABLE OF THE SOWER will make its way to the DMV area as a co-presented production with Strathmore. Eric Ting directs this fully staged opera recreating Octavia Butler’s sci-fi, Afrofuturist masterpiece live on stage.

The 2021-2022 season will end with the world premiere of THERE’S ALWAYS THE HUDSON, a new work by and starring Paola Lázaro (The Walking Dead), after originally being scheduled for April 2020. The cast and creative team had just started the third week of rehearsals when the production was put on pause last year. Jess McLeod directs this hilarious, fearless and f--ked up adventure about two fractured souls who make a pact to get revenge and let loose their fury.

This fall, Woolly in association with Folger Shakespeare Library, will launch a national tour of WHERE WE BELONG by Madeline Sayet and directed by Mei Ann Teo. Adapted as a piece of streaming theatre this summer, this live event will allow Madeline to perform the piece all over the country. Dates and tour stops TBA. For booking information contact Broadway & Beyond Theatricals.

Last year Woolly launched its truly original, one of a kind program: The Golden Ticket and is happy to continue on with this innovative way to experience Woolly all season long! The Golden Ticket unlocks a completely unlimited experience for the 2021-2022 and is priced at just $348! However, it will also be offered at a more accessible price of $219 to ensure cost is not a barrier to anyone joining for this season. Either price point can be paid in three installments.

New in the 2021-2022 season, Woolly’s Pay What You Will program will extend to every single performance. Twenty-eight seats will be reserved for each performance for audiences to select a price that aligns with their budget. These tickets will be available to purchase over the phone or online without any timing restrictions and will be sold first come first serve.

Woolly’s commitment to welcoming our community back safely is unwavering. As the city moves forward with reopening, Woolly will solidify and communicate our attendance policies based on science-backed recommendations from health professionals and DC officials.

In Association with Huntington Theatre Company and Pasadena Playhouse

Welcome to a modern, darkly comic re-telling of Shakespeare’s RICHARD III set in the most treacherous of places—high school. Bullied because of his cerebral palsy, Richard is willing to crush his enemies in order to become senior class president. But all the scheming, manipulation, and revenge plots force him to ask the age-old question: is it better to be loved or feared?

"Initially planned for June 2020, we were well into final designs and only a little over a month away from rehearsals when we had to postpone this show last season because of the coronavirus. This hysterical and riveting reimagining of RICHARD III showcases the self-loathing that comes from social rejection, especially for disabled youth. It feels so important to have this show back in our season, especially given the contemporary resonance of conversations about bullying on social media and the toxic masculinity we are witnessing all over our country. This show also demands that all of us reevaluate our rhetoric surrounding the disabled experience." - Maria Manuela Goyanes

In Association with Playwrights Horizons and Page 73 Productions

“When I think about all the unexpected work Woolly could do, what’s more unexpected than a Broadway-bound musical? This show is very special to me. When I was 25 and Michael R. Jackson was 24 and still in graduate school, I directed the first early readings of A STRANGE LOOP. With this project, my past is becoming my present, and, in a way, my very own strange loop! This musical centers a Black queer man whose experience stands in sharp relief to the more mainstream LGBTQ progress we’ve seen over the past decade. Woolly Mammoth will break into song with what I believe to be completely Woolly material—a bold show with nerve, replete with soaring and gut-wrenching show tunes.”

HI, ARE YOU SINGLE?

In Association with IAMA Theatre Company

Ryan has a higher sex drive than you. He also has cerebral palsy. You can often find him on Grindr or at your local inaccessible gay bar. Join writer/performer Ryan J. Haddad on his search to find love. Or a date. Or at least a hookup. From encounters with drag queens to platonic lap dances, Ryan will guide you through the gay dating scene with his provocative take on intimacy, rejection, and judgment. His one request? Please bring an attractive male friend with you.

“Hot off the heels of our critically-acclaimed digital production, it’s well past time for our audiences in the DMV to finally meet the glorious (and gorgeous) Ryan J. Haddad in the flesh! This pandemic asked us all to re-examine what physical intimacy could look like, and Ryan’s perspective on navigating those interactions as a gay man with a disability is one we need to hear more often. Oh, and he is still looking for a date—I’d be happy to set you up!” - Maria Manuela Goyanes

Parable of the Sower is a triumphant, mesmerizing work of rare power and beauty that illuminates deep insights on gender, race, and the future of human civilization. This fully staged opera brings together over 30 original anthems drawn from 200 years of Black music to recreate Butler’s sci-fi, Afrofuturist masterpiece live on stage. With music and lyrics composed by Toshi Reagon and Bernice Johnson Reagon, this compelling work gives life to Butler’s acclaimed science fiction novel of the same name.

“From the moment I first heard the stunning score Toshi and Bernice created for this epic adaptation of Octavia E. Butler’s renowned novel, I just knew we needed to find a way to share it with our audiences in the DMV. Since then, the need to elevate this powerful post-apocalyptic story filled with hope and human connection has only become more urgent to me. With a powerhouse ensemble of singers and musicians, there could be no better home, or better partner, for this piece than Strathmore. I’m thrilled to join forces and unite our audiences to witness this visceral and mesmerizing new operatic work that beautifully reveals Butler’s stunningly prophetic insights on the future of American civilization.” - Maria Manuela Goyanes

Lola and T met years ago in a support group for sexual abuse survivors. They’ve made a pact... and the deadline is coming at them fast. So tonight, they decide to take matters into their own hands by plotting to exact revenge on anyone who has ever f--ked with them. Spend the night with two fractured souls who let loose their fury in this fearless adventure. Paola Lázaro’s new work takes an unflinching look at confronting trauma, and how the bonds with our chosen family can carry us through.

“We were two weeks into rehearsal for Paola’s world premiere play when we had to stop because of the pandemic. Though it was heartbreaking to send everyone home, I was so moved by how quickly this group of artists bonded over this brilliant material, with Paola at the center as not only the writer, but the lead performer as well. This is a play whose characters leap off the page with tremendous energy, authenticity, and depth, and I can’t wait to be in the theatre with them again.” - Maria Manuela Goyanes

WHERE WE BELONG TOUR

In Association with Folger Shakespeare Library

In 2015, Mohegan theatre-maker Madeline Sayet travels to England to pursue a PhD in Shakespeare. Madeline finds a  country that refuses to acknowledge its ongoing role in colonialism, just as the Brexit vote threatens to further disengage the UK from the wider world. In this intimate and exhilarating solo piece, Madeline echoes a journey to England braved by Native ancestors in the 1700s following treatise betrayals—and forces us to consider what it means to belong in an increasingly globalized world.

“Coming off the success of our film adaptation of WHERE WE BELONG, Woolly and the Folger are so thrilled to give audiences around the country a chance to witness Madeline Sayet’s deeply insightful journey, in-person! This play is a moving and funny examination on language, appropriation, erasure, and how to honor one’s ancestry. We also plan to support this tour through intentional engagement of local Indigenous communities along the way. We will be announcing what communities we will be visiting later this fall.” - Maria Manuela Goyanes