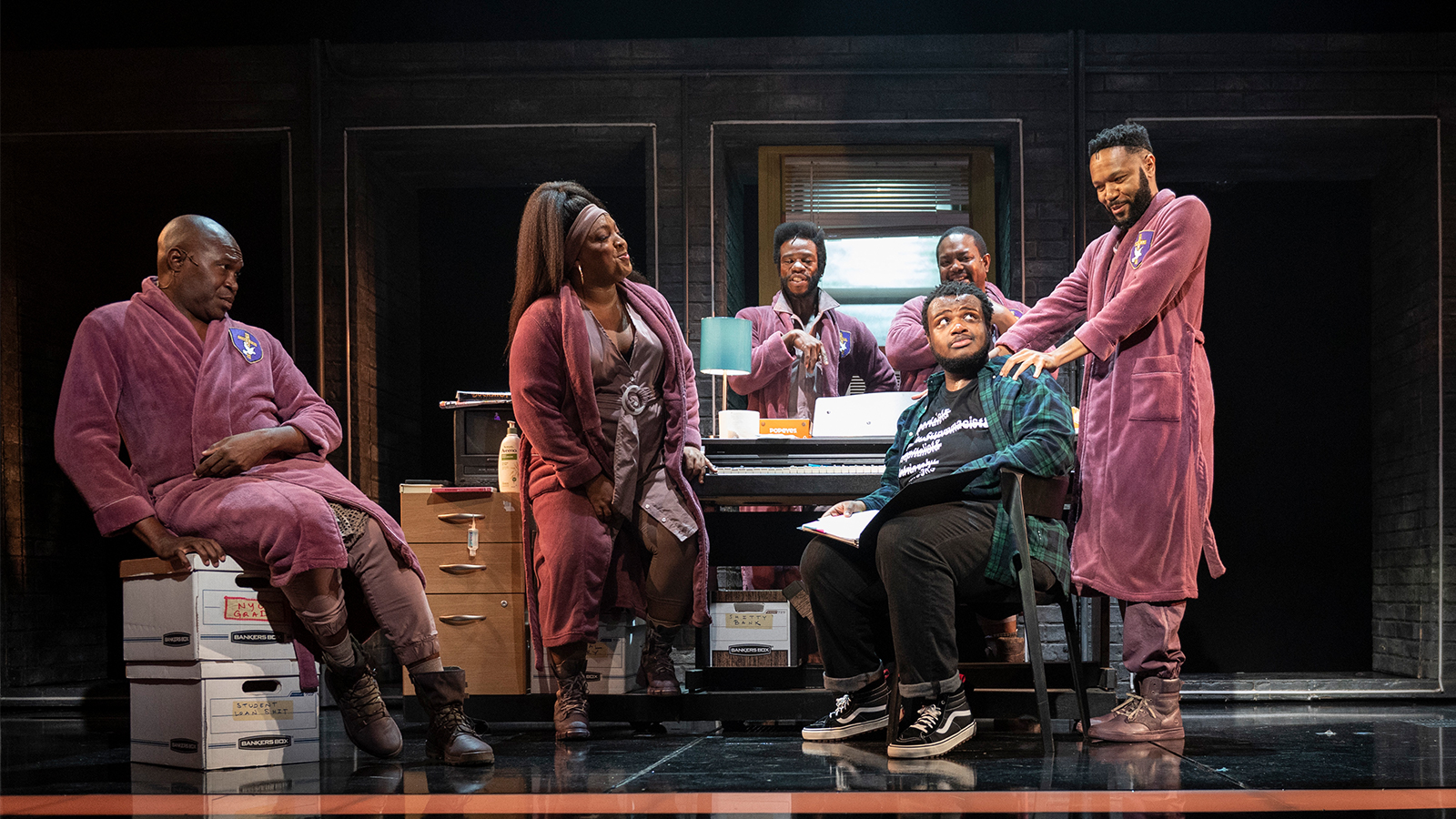 The company of A Strange Loop | Photo: Teresa Castracane

There’s a stanza in Danez Smith’s poem “-a love story-” that I’ll never be able to forget. The speaker is recounting a sexual encounter that possibly led him to contracting HIV, an act he remembers in a sensory collage of sweat, salt, and desire. Smith writes:

it’s not a death sentence anymore

As a “Black, Queer, Poz writer & performer,” Smith understands that contracting HIV may no longer be a “death sentence” in the 2010s. But the disease still carries a traumatic weight in his own life, and still disproportionately affects Black gay men in America. The poem’s response to this lingering memory is to slowly erase a dismissive thought, line by line. Smith calls attention to language on the level of the sentence until speaking itself becomes tentative, beguiling, and unresolved.

There’s a similar kind of transformation occurring in A Strange Loop, Michael R. Jackson’s invigorating exploration of identity now playing at Washington, D.C.’s Woolly Mammoth Theatre Company. A Strange Loop uses every aspect of musical theatre in order to strip away Jackson’s identity, line by line, until the very act of creation can be contested. By turns heartbreaking and hilarious, A Strange Loop is a masterful piece of theatre. It’s the boldest musical I’ve ever seen on a stage.

This production at Woolly Mammoth comes after the show’s much-lauded off-Broadway production in the summer of 2019, produced by Playwrights Horizons and Page 73 Productions. The D.C. production of A Strange Loop was announced in March of 2020, right before the COVID-19 pandemic shuttered theatre across America, and right before Jackson’s won 2020’s Pulitzer Prize for Drama for the show. Woolly Mammoth isn’t known for producing musicals, yet it makes sense for A Strange Loop to be staged here. The musical has more in common with Woolly Mammoth’s past productions of experimental Black plays (like Fairview or An Octoroon) than the reworkings of classic musicals typically seen in D.C. theatre.

Echoing the chaos of a wrenching creative process, A Strange Loop cycles through multiple interconnected elements all at once, colliding hushed intimacy with unabashed profanity. Usher’s consciousness is conjured onstage through a six-person ensemble embodying his “Thoughts.” The ensemble is played by a stellar group of performers, all of whom were in the off-Broadway cast (L Morgan Lee, James Jackson Jr., John-Michael Lyles, John-Andrew Morrison, Jason Veasey, and Antwayn Hopper). They effortlessly shift from playing abstract ideas to historical figures to real-life family members. The constant interplay between the Thoughts heightens their cruelty and playfulness, paradoxically underlining each performer’s individuality.

The unifying theme between all of Usher’s conflicting thoughts is self-doubt. He dreams of finding articulation on the page, but is haunted by audiences (both white and Black) who will misunderstand his work. He finds joy in the songs of his “inner white girl,” but acknowledges that society might never grant him the free-spiritedness he craves. He seeks solace in his mother and father, but their refusal to accept his gayness—and their insistence that he write “a nice, clean Tyler-Perry-like gospel play”—pushes Usher to a breaking point.

Stephen Brackett’s direction constantly reminds us of the historical injustices Usher’s contemporary woes come from. When the Thoughts wave sparkly minstrel gloves in the darkness of one troubling scene, it’s an apt metaphor for what Jackson himself is doing: staging a dazzling, gross spectacle in order to be seen at all.

The dilemma Usher must face again and again is how to love a world that doesn’t know how to love him back. Usher keeps trying to find solutions in his different identities. But like the never-ending structure of a fractal, it doesn’t matter how deep Usher dives into himself: everything is a maddening repetition of the same pattern.

While Usher’s drive might be to disappear (some new lines during “Inwood Daddy” state this more explicitly), it becomes clear that there’s no place in the world where Usher could be free from himself. Watching A Strange Loop only minutes away from my Virginian hometown, a rupture initiated within me that was almost unbearable.

I listened to the soundtrack for A Strange Loop for the first time while driving back up to college after seeing Woolly Mammoth’s production of Fairview. Those shows, along with Jeremy O. Harris’s Slave Play, all physically (and metaphysically) brought me back to my Virginian hometown, a place from which I had long been trying to escape.

Like my own personal “inner white girl” Lady Bird (where’s that chapter of Disidentifications, dramaturgs?), when I was younger I wanted to go where the culture was: Connecticut, where writers lived in the woods. But like the countless queer people of color who leave their hometowns to find somewhere to exist freely, I soon found out nowhere would be free of external oppression and internal repression.

I can try to cut ties with my Trump-voting family, but the culture of D.C. that spews hatred for my own existence is the culture that defines this country. I can disavow white gays for as long as I live, but that doesn’t stop my pathetic body from being attracted to them. My hometown can take down its Confederate statue, but that doesn’t heal the psychological wound of living under it for most of my life. I can try forgetting the homophobia in the Filipino Catholic church I was raised in. But that doesn’t erase the fact that the first time I realized a man could desire my body, it was because every discussion with a priest had a supervisor to make sure I wasn’t molested.

No matter how far away I move from Virginia, no matter how much older I get, no matter how hard I try to put myself in spaces where I don’t feel in danger, I will never be able to escape the conditions of my youth that shaped me. It’s the sentence I have to face. That’s the provocative thesis in A Strange Loop’s unrelenting exploration of personhood: there is no escape from yourself.

On its surface, A Strange Loop mirrors the themes of other musicals about Black characters trying to escape their lives. Like Stew and Heidi Rodewald’s Passing Strange, Jackson interrogates the illusions of Black representation that “pass” as reality, or the ones that at least perform “realness.” Like Tony Kushner and Jeanine Tesori’s recently revived Caroline, or Change, Jackson creates a world full of tortured stagnation for its protagonist, despite other characters’ well-meaning liberalism.

The characters of Passing Strange and Caroline, or Change eventually deconstruct the idea of escape, finding meaning in their matriarch-led families. But Jackson doesn’t find the domestic family to be a redemptive institution. His escape isn’t about finding hope in others. A different realization is made: instead of struggling to keep up with the world, the world should instead be struggling to keep up with you. As Jackson recently wrote, “It is only when [Usher] realizes there is nothing wrong with him that he changes.”

At the end of A Strange Loop, the world has not fundamentally changed for Usher. He’s still facing all of the challenges explored over the musical’s runtime, and is still questioning why to even write what we’re watching in the first place. He’s found no justification for his own existence, but he decides to continue creating it anyway.

What a worse place the world would be if Jackson hadn’t created this musical. I hope every audience yearns to keep up with Jackson’s sprawling, ingenious mind. What a privilege it is to witness Jackson’s confident, beguiling, and unresolved song of himself.

A Strange Loop is in performance at Woolly Mammoth Theatre Company in Washington, D.C. through January 2, 2022. For tickets and more information, visit here.