American Dreams Reviewed: DEATH OF A SALESMAN and 1776 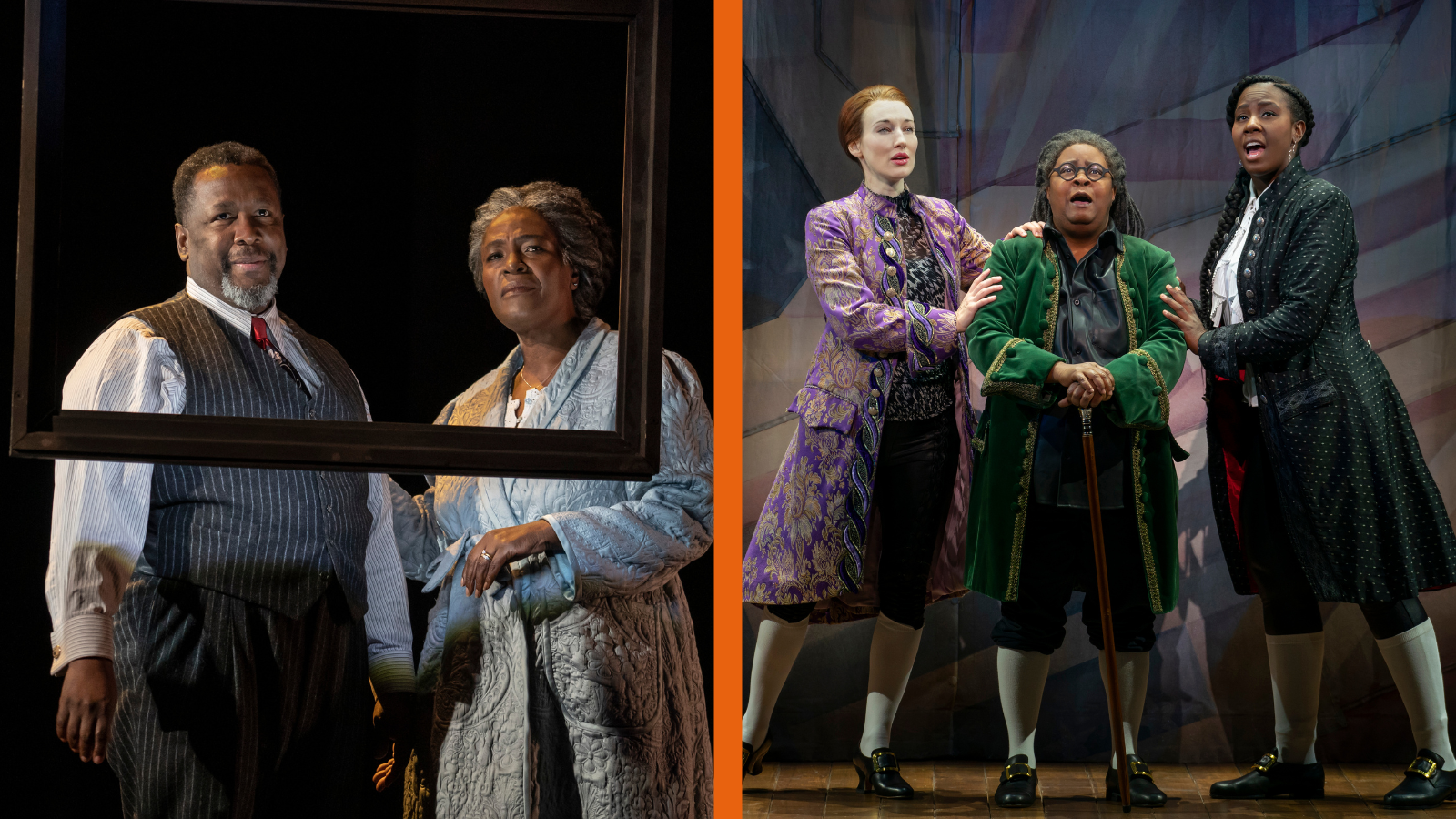 Death of a Salesman and 1776 both opened on Broadway this week | Photos: Joan Marcus

Two visions of the American dream have been revived on Broadway this week and could not feel any more different in execution and connection to reality, despite their shared interest in what switching the racial elements of national iconography can do to a heralded American work. The first, a buzzy reimagining of 1776, a musical about the signing of the Declaration of Independence, struggling to remain relevant through co-director Jeffrey L. Page and Diane Paulus’ Hamilton-cribbing idea to swap the race (and here, gender) of the Founding Fathers, is fine. The second, where the art lies, is a crackling transfer of an acclaimed London production of Arthur Miller’s Death of a Salesman, starring an incandescent Wendell Pierce, Sharon D. Clarke, and André De Shields.

The full tea: I don’t give three shits about American history, and if I ever did, it was beaten out of me around the nineteenth time I was made to learn it while coming up through the public school system. To my understanding, no other country forces its youth to “learn” its history as much as this one; where others look outwards to other civilizations, the U.S. is hellbent on hammering down its own mythos to the point of mindless ubiquity and acquiescence. The only part that ever interested me was the final chapter in any given American history book, usually titled something like “Post-WWII,” which would cram Martin Luther King, Jr., Watergate and 9/11 into what is essentially an afterthought.

But those are never the aspects we seem interested in examining (“examining”). Instead, we turn and turn over the stones of the Founding myth, continually blind to the fact that there is very little about those slave-owning rapists to be “discovered” or reclaimed with each new lens we foist upon them.

1776, with few music and lyrics by Sherman Edwards—this is barely a musical, and contains the longest stretch within one to not feature any music—and a book by Peter Stone, trots out our familiar cast through a pageantry of old-timey civics not unlike Epcot’s American Adventure. The celebratory climax arrives when John Adams is convinced to strike his abolitionist clause from the Declaration and a new country begins.

The cast, composed exclusively of female, transgender, and non-binary actors—though, curiously, no trans women—mostly of color, is uniformly great, as adept at selling you on the bureaucratic drama that takes up much of the first act as it is at singing the house down when required.

But the production’s racial casting brings to mind something I’ve noticed with this recent trend. To play a virtuous hero is hardly ever much fun; even our most beloved leads require some quirks or shades. Elle Woods needs a little frivolity, Company’s Bobby/ie needs their sardonic sadomasochism. Villains are always more interesting, just look at the classic Disney ones we so adore. John Adams, at least in this work, is dull to a fault, merely playing Good, and is thus hard to root for. Now we attach virtue to social justice, a worthy venture, but one which opens the door to making our socially righteous heroes the most boring characters in their respective pieces, and therefore their least convincing.

This is made doubly worse when the leads are reimagined to be played actors of color, now burdened with the anti-dramatic task of being virtuous, correct, and unambiguously ethical. Why worse? Because then your eyes stray towards the villains who, free from such restraints, can actually develop a character worth following. This is why recent productions like Pass Over, Black No More, and now 1776 to me left me more invested in the white villains—detached, let me make absolutely clear, from their odious ideologies and actions—than the bland heroes of color.

Here, they come in the form of a hilarious Shawna Hamic, as Virginia’s Richard Henry Lee, and Carolee Carmello, as the “Cool, Cool, Conservative” John Dickinson of Pennsylvania. Though, to be fair, Carmello being a standout has hardly anything to do with any given production and more with her god-given ability to belt into eternity. The two are having fun, which is more than can be said of many of the rest. When the swaggering Dickinson offers an argument to the effect of, “We came to this continent to colonize, why shouldn’t we prioritize land ownership?” I found myself vastly more interested in his uncompromising honesty, however evil, than in Adam’s bleeding heart. As with Hamilton, I am not jumping for joy, as we are encouraged on all fronts to do, that people who would not have been allowed in these rooms can now play them for profit onstage. I am not reveling in this purported subversion, rather further disgusted by these men we continue exalting. Were they ever thinking of others? Who the fuck are “We the people”? Thus Adams becomes the lying villain.

Well-directed by Paulus and Page, with sumptuous costumes by Emilio Sosa and despite a set, by Scott Pask, that looks assembled by a middle schooler at Bed, Bath & Beyond, 1776 is not a bad production, just not one for me, and probably not one for anyone hoping Broadway would become a more relevant place. Paulus, a creator I so admire, can rest easy that she cashed in on the woke-ification of American history, with a solid production that should hit the road immediately, ideally partnering with AP U.S. History courses nationwide.

Death of a Salesman

You’d be forgiven for not salivating at the prospect of spending over 3 hours revisiting Death of a Salesman, but get those glands going because this old chestnut, courtesy of a Young Vic production, feels vivid, relevant (the rent in New York is too damn high), and utterly unmissable.

The work speaks for itself, so I won’t bore you with the particulars of Willie Loman’s (Pierce) well-trod life: his 30+ years as a traveling salesman hoping for a steady gig back home in New York, his nurturing wife Linda’s (Clarke) fraught commitment to keeping him hopeful despite his career, income, and sanity’s obvious decline, and the cyclical folly of his two sons—Biff (Khris Davis), a former star athlete who resents the office life set in stone for him, and Happy (McKinley Belcher III), a womanizer with little ambition. And let’s not forget dearly departed brother Ben (De Shields), whose ghastly promises of eternal rest, and the insurance payout that would follow, become increasingly seductive.

What we have here are powerful, Grecian performances from some of the top stage talents we have today, each delivering stunning work that finds newness in Miller’s well-known words. The production, directed by Miranda Cromwell on a sparse Anna Fleischle set that suggests the timeless, pantheonic nature of the tragedy at hand, is a revelation, allowing the cast’s Blackness to inform the work in an understated yet devastating manner. This changes the nature of the misfortune, of course, from everyman American failure, to the country’s original sin, which we can name and understand, creating a haunting effect.

Its one misfire comes through a slight overproduction, mostly through Mikaal Sulaiman’s sound design, which features nightmarish echoes and prioritizes sensory overload in moments where quiet simplicity would go much further. When you have Wendell Pierce, tightly spotlit and giving the performance of a lifetime, mid-breakdown after we’ve spent over 2 hours getting to know his specific pains, we do not need reverbs of said quandaries to understand where he is coming from. Cromwell is also guilty here, having her actors superfluously walk through the stage like ghosts tormenting Willie: exhibiting a lack of trust in the audience that is a bit disappointing.

Nevertheless, this Salesman is a production for the ages, and one I cannot recommend enough. Sharon D. Clarke, you will always have a home on Broadway.

1776 is in performance through January 8, 2023 at the American Airlines Theatre on West 42nd Street in New York City. For tickets and more information, visit here.

Death of a Salesman is in performance through January 15, 2023 at the Hudson Theatre on West 44th Street in New York City. For tickets and more information, visit here.