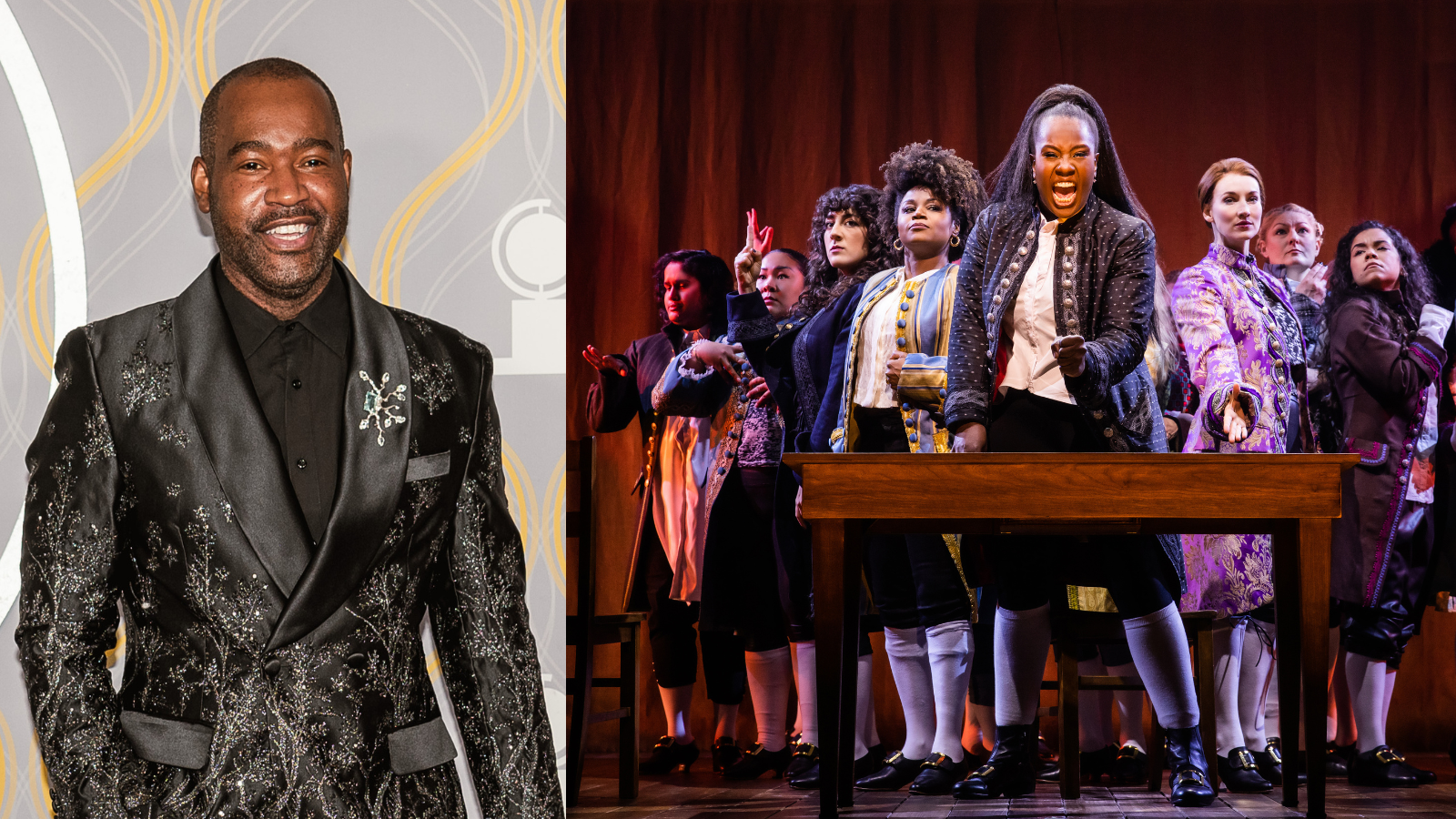 Audiences going to see 1776 will likely hear familiar historical names when they sit down at the American Airlines Theatre to see the latest Broadway musical revival. Costume designer Emilio Sosa isn’t interested in giving the show—which begins previews September 16—an antiquated feel, however.

“It is period with a twist,” says Sosa. “It’s not a museum piece. I’m not putting people in head-to-toe garments from the 18th century. We’re giving you enough of the period so you fall into the story but it also has a modern slant so that people who are telling the story look like you…Even though the people who were writing our story of this country looked like only a certain population.”

That ethos has long been the designer’s calling card. He began working on theatrical shows full-time in the late '90s, and by 2002, he landed his first gig with Suzan Lori-Parks’ Pulitzer Prize–winning play Topdog/Underdog. Since then, he's been nominated twice for a Tony (including last year’s Trouble in Mind), placed second in Project Runway’s seventh season, and co-launched a fashion label that's been worn by celebrities like Uzo Aduba.

The 1776 gig came about thanks to his longstanding partnership with Diane Paulus, artistic director of A.R.T. where the revival launched its out-of-town tryout earlier this summer. They worked together on multiple occasions prior, including the 2011 Tony-winning revival of The Gerswhin’s Porgy and Bess.

Together, with co-director and choreographer Jeffrey L. Page, they’re bringing the musical into the 21st century. The entire cast is made up of women, non-binary, and transgender performers. Check out some of the looks below and read on for more on Sosa’s story, the design process for 1776 and his upcoming shows.‍

“For 1776, the playwrights were very specific in a lot of dressing notes,” explains Sosa. “They made references to what the Northerners wore, as far as color and texture, compared to the South, who were a lot flashier, fancier. The Northerners were a lot more reserved and Quaker-ish. That manifests as far as colors and textures of the fabrics. And that’s how we can differentiate the States within a large group of people.”

Of course, Sosa says he can’t pick a favorite look. He talks about the main trio each having a unique component that he's proud of. Since John Adams is the protagonist, color is the most important. For Jefferson, it’s about highlighting his well-documented fashionista ways, incorporating imported fabrics and focusing on the outward appearance. Ben Franklin’s look comes from a popular painting featuring him in a velvet green jacket.

“I picked that color for [Franklin] just so audiences can connect the characters to things they've seen before, but subliminally, in a way.”

‍1776 isn't the only show Sosa is working on this season. He created the designs for the Neil Diamond bio-musical A Beautiful Noise, which also had an out-of-town in Massachusetts, and is coming to the Broadhurst November 2. Sosa says the aesthetic is celebratory.

“I’m a huge fan. The music was always key. Also, he's an amazing storyteller. You see him where he starts, where he ends, and we go on a ride.” Audiences will see that in numbers like “Cherry Cherry” and “Forever In Blue Jeans.” The foot-stomping finale, the designer adds, reminds people that they know so many Neil Diamond songs—they just don’t realize that—and he loves that revelation is embedded within the musical and, by extension, his costumes.

Despite being in the thick of Jordan E. Cooper’s play, Ain't No Mo’, there's no headline aesthetic yet for that Broadway show. It starts previews November 3. “This one is new to me…There's so many layers of that show,” says Sosa. “It presents itself one way, but the inner layer, the inner workings, and what you come out of it with, are so deep that I would need a little more time.”

When asked how he balances it all, Sosa says compartmentalizing is key. “I can spend two hours on one show and then turn around and then two hours on another show… Also, I have great people on different projects, so I create pods.”

It’s a process that he’s developed since childhood. Born in the Dominican Republic, his family immigrated to New York City in the ‘70s. He almost-always knew he wanted to be an artist, but it really kicked off thanks to a 3rd grade teacher who inspired him. Using a solid work ethic inherited from his parents, he was accepted to the High School of Art and Design, and then went to college at Pratt Institute to study fashion design.

Theatre was the farthest from Sosa's mind during his early years. “My family didn’t go to the theatre. [It] is a very privileged, I think, experience, unfortunately, that we need to open up more to the community. Although there's a lot of community theatre, we need to fund more.”

That all changed with Betty Williams, a Pratt professor who taught History of Costumes. After initially skirting around a summer job as a costume designer, and a detour as a children's wear designer, he ended up taking a chance that would change his life.

After being encouraged by Williams and a close friend, he landed his first job at Grace Costume. “I stayed with them… 20 years until they closed the shop eventually,” says Sosa. “I first started out as a shopper at a costume shop, which is exactly what the word means: shopping. [I bought] fabric, trims, buttons, supplies, anything a custom shop needed to manufacture a costume and to run a business.” It was a lesson in the world of design that he says was immeasurably valuable, especially when it comes to fabrics. Those relationships he developed back in the day are still integral today, too.

That led him to Toni-Lesli James who encouraged him to go on tour with the Alvin Ailey American Dance Theater as a wardrobe assistant and then became a supervisor. He even got to design for AAADT leader Judith Jamison, or “Ms. Jamison” as Sosa affectionately calls her. “I toured domestically and internationally for two years. And that was another lesson, I learned how costumes survive on the road. So every job that I have taken has added an amazing layer of knowledge to my growth.”

Sosa knew his heart lay elsewhere, however. Now, years later, his work as a designer involves the bigger picture, working with a team of associates and assistants that help him with each project. For example, he’s the one drawing the boards for each character, putting it all together with color and style.

And so, the work continues. After our interview, it was announced Sosa would also be designing the costumes for the 2023 Broadway revival of Sweeney Todd: The Demon Barber of Fleet Street. With his savvy and collaborative process, the looks are sure to be killer.