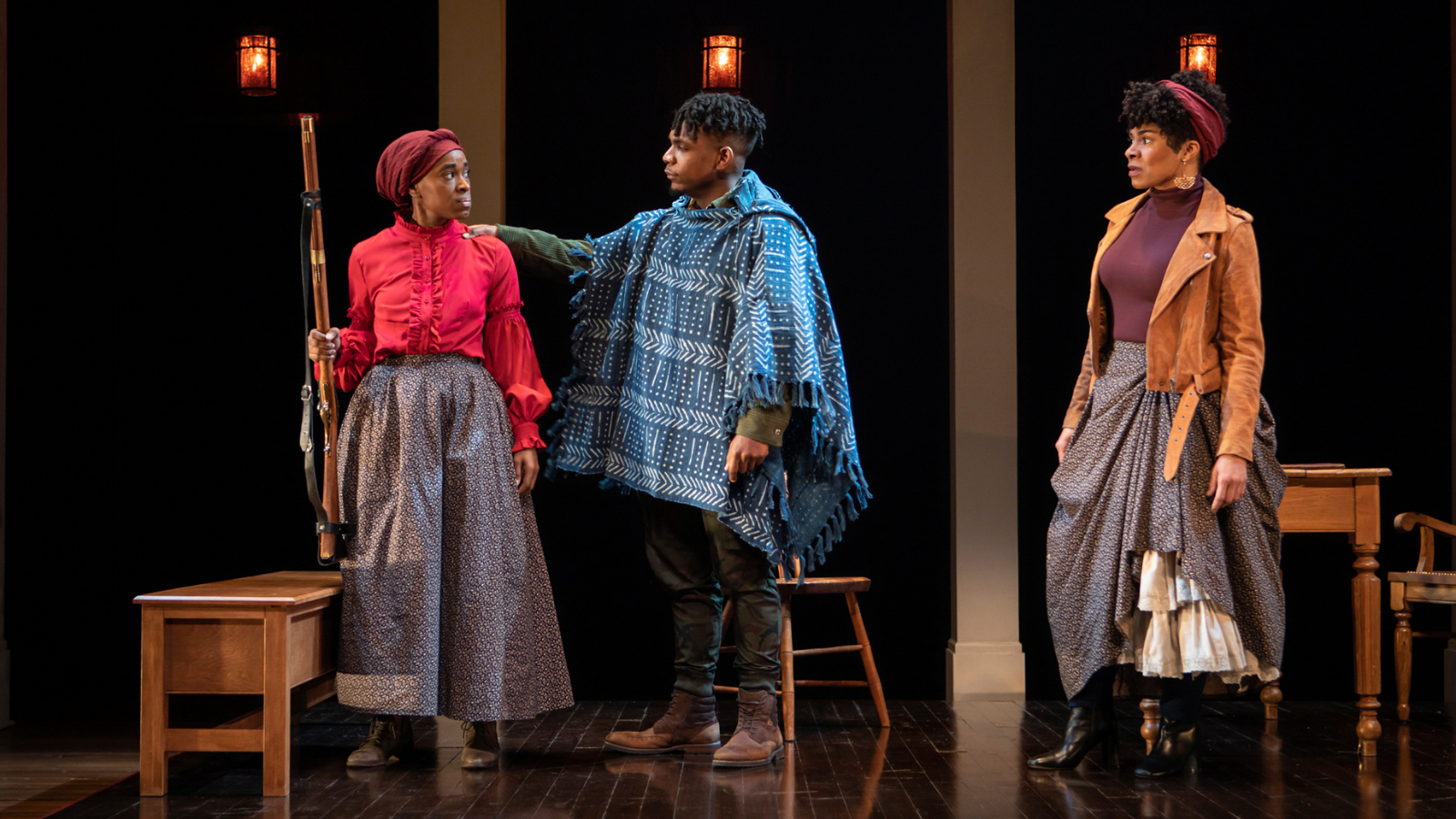 As with all of Dominique Morisseau's plays, there are about 10,000 things going on at once in Confederates, now receiving its New York premiere in a spellbinding production by Signature Theatre. But, because it is Dominique Morisseau, each one—the text, the pretext, the subtext—is executed with laser precision and craft. A master at weaving together personal, historical, and social narratives, Morisseau here delivers her most ambitious, possibly most galvanizing, work yet: a comparative study between a Black woman professor at a respectable university, and the slave to whom she is equated in a campus hate incident.

Sandra (an excellent Michelle Wilson) walks right out and says it: “I am not averse to images of slavery.” A tenured professor with years of research into America’s “peculiar institution” under her belt, she does not flinch at the myriad plantation narratives we’ve received since the Civil War. But her stolidness is tested when, shortly after wearing a Black Lives Matter shirt to class, a printout of her face over a photograph of a slave breastfeeding a white child is taped to her office door.

While keeping the respectable calm expected of her at the majority White institution, she begins to question those around her. There’s Malik (Elijah Jones), a Black student who claims she holds a bias against men after getting a B+ on a paper comparing corporate America to the plantation; Candice (Kenzie Ross) her upspeaking white aid, terrified of saying the “wrong thing” but usually doing it anyway; and Jade (Andrea Patterson), the only other Black professor in their department, slighted by what she thinks is Sandra’s coldness towards other Black scholars on campus.

Running parallel is the story of Sara (Kristolyn Lloyd), a perceptive, literate, slave plotting her escape. Lloyd, who has previously excelled in a production of Morisseau's Paradise Blue, continues to be a perfect match for the playwright’s wise and weathered wit—the play, as trenchant as it gets, is extremely funny. Her Sara is modern without being condescendingly contemporary—a shorthand too many actors fall into—and Lloyd has a bright, powerful core that is believable and insanely watchable.

She’s surrounded by Jones, Ross, and Patterson in roles not too dissimilar from their campus lives. Both Sandra and Sara are approached “woman to woman,” “sister to sister” — the Black men in their lives appealing to their shared race when they need something; the white women appealing to their gender. The other Black women are presented as a final match, a mirror cracked by centuries of shared oppression. Should minorities coddle, or tough-love their own? Morisseau incisively questions the responsibility we owe to ourselves and those around her through a carefully plotted exploration of accountability that borders on tragedy.

Ayers’ impeccable direction here nails every beat, often creating haunting tableaus like an early one where Sandra ponders her role at the university downstage, while Sara aims a steady rifle upstage. She has the supporting characters cycle in and out of Ari Fulton’s period costumes onstage, and leave more and more props behind as they transition between scenes and eras. Curtis Craig and Jimmy Keys’ sound design highlight parallels between antebellum tunes like the shockingly racist “Oh! Susanna” and its present-day offspring. These are blunt but effective choices that keep the alternating stories inextricably tied, and each one lands like a shot to the chest.

In a little over a year, I’ve had the privilege of experiencing three of Dominique Morisseau's works: Audible’s Paradise Blue, Manhattan Theatre Club’s Skeleton Crew, and now Signature Theatre’s Confederates. I don’t use “privilege” lightly; I believe Morisseau is one of our finest working playwrights. In each of these plays, as with Lloyd’s performance, Morisseau is brilliant in the lines she draws between modern America and the plantation, dramatizing their effects with remarkable efficacy. The thematic threads she creates are exquisite, and she handles them with stunning artistry, weaving them through complex designs of race, power, and grace.

At one point, Sara is told the Union soldiers are fighting for her freedom. “Without me?” she asks, partly glad but mostly bewildered that her livelihood is someone else’s pawn. Combating this denial of agency seems to be Morisseau's project, and she’s leading her charge with thought-provoking, magnificent strength. I cannot wait to go wherever she takes us next.

Confederates is in performance through April 17, 2022 at The Pershing Square Signature Center on West 42nd Street in New York City. For tickets and more information, visit here.