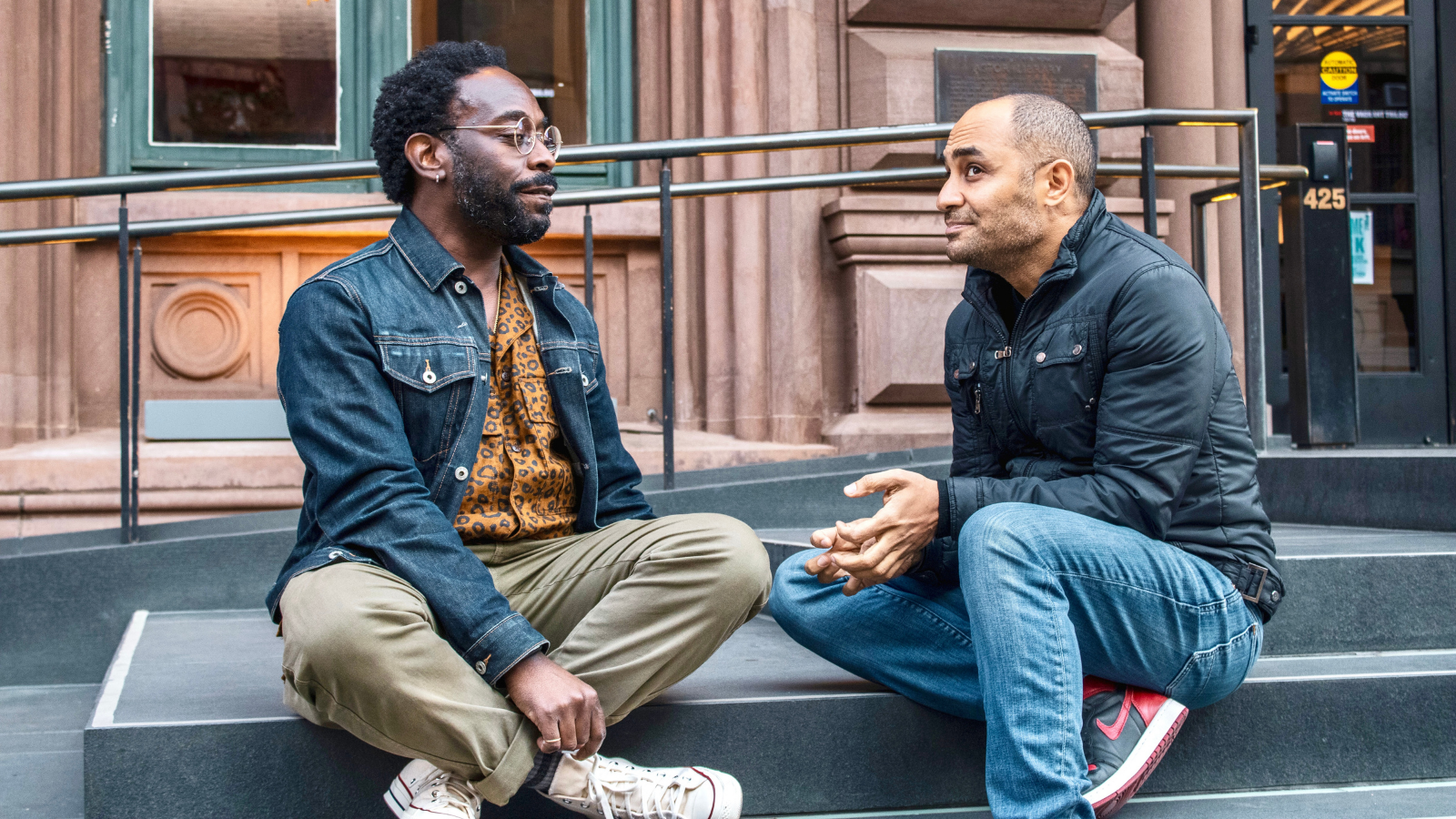 Perfect timing, the exact-right group of people, and a lot of text messages: that’s what it takes for a dream team of collaborators to reunite. Pulitzer-winning playwright James Ijames and The Public’s Associate Artistic Director Saheem Ali have come together again to work on Fat Ham, a new play at The Public Theater. The production is co-produced by the National Black Theatre, where Ijames and Ali previously worked on Kill Move Paradise.‍

Theatrely went downtown to meet Ijames and Ali in one of their final weeks of rehearsal. We chatted about inspirations, process, and the magic that this production brings—both onstage and off.

Since our meeting, Ijames’s Fat Ham won the 2022 Pulitzer Prize for Drama, a distinction most recently given to Katori Hall’s The Hot Wing King and A Strange Loop.‍

‍This interview has been edited for length and clarity.‍

‍Let’s go back to the beginning, what were your first inspirations for writing this piece?‍

‍James Ijames: I’ve always really loved Hamlet. I did an abbreviated production of it in college, and it’s just always stayed with me…I wanted to write a Hamlet that felt close to my experience. I felt like I could set the tone that could push against how we normally see this [character]. I wanted to tell the story of a family that was in a moment of crisis, and I wanted to tell a story that was set in the South, that was dealing with how queer people make themselves in the South. Growing up in North Carolina and sort of figuring out my identity as a gay man in the South, growing up with a church and an intensely religious family... I was like—that’s Shakespearean.

‍Was there a particular moment or event that encouraged this?‍

‍Saheem Ali: The script was already done when I hopped in. I read it and immediately fell in love with it. Both because I love James and his writing, but also because I love Shakespeare. The last three or four Shakespeare productions that I’ve done, I’ve worked with a living playwright in conversation with the originals. But, this is the first time the playwright had already gone on that journey, and I was being invited to the process after the fact. In a really beautiful way, it was the next step in the continuum of my own kind of moving the needle of how much Shakespeare there was and how much was contemporary. In each process that I’ve done, I’ve slowly been bringing more and more contemporary text in, so at this point, the floodgates are open, and it’s like 90% contemporary, 10%, if that, is Shakespearean text. It was really this beautiful, serendipitous, situation where it’s someone who I love and a play that I love, and it just happened to scratch my particular itch.

‍As you began working with the script, what elements were you most focused on bringing into focus?‍

‍Ali: That it was Black, queer, and Southern. I have access to most of those, not all of those, in terms of my own identity. There’s such humor and life and exuberance and theatricality in all of James’s pieces, and he does it in different ways in each and every one, so, for me, it was about really mining each of those aspects that’s present in the text. And then, of course, just finding the actors who had the facility for it. James has such a particular sense of humor, particular sense of rhythm, particular sense of surreal and heightened theatricality, you just have to find the actors who fit it.

‍How would the two of you describe your collaborative style?‍

‍Ijames: We talk a lot.

‍Ijames:: Yeah, we text a lot. When we’re together, we sort of muse and dream together. I trust him completely. I’m back and forth between here and [Philadelphia] so I’m not here every day, but I never think, “Oh I wonder what they’re doing?” I’m always like, “I can’t wait to see what they’ve come up with!” This is the thing I say about Saheem all the time: what I love so much about working with him is that he extends the theatrical imagination of the play. So, the play is a thing and then he’ll look at it and there’ll be five or six things where I think, “I never would have seen that and I’m so glad that you showed it to me.” Which I think is the mark of a really good collaboration between a director and a playwright.

‍Ali: It’s a really crucial component of our relationship. James leaves enough room on the page for a director’s imagination, and that’s not always true about playwrights. Some playwrights are very explicit about how things unfold and why they unfold that way…every time [James] writes, there’s an invitation, a gesture. And it’s such a delicious invitation because he makes a proposal and then he’s like, “What do you do with this proposal?” And then it’s up to me to be like, “Okay, you know how I see it…”

‍A lot of people may hear about this show and think “Oh, it’s a take on Hamlet, I’ve read Hamlet before.” What do you think they will be surprised by?‍

‍Ijames: I’d say most of it. I think “a take on Hamlet” is maybe even generous. [laughter from everyone in the room] Like there are a few plot points, there are definitely character parallels. I think I paid closer attention to the fact that he can’t go to college. Like that’s a thing that happens to Hamlet, he wants to go to Wittenberg, and they’re like, "No, stay here!" But it’s a much bigger deal in this play, and it’s a little malevolent, the reason why he can’t come back.

‍Ali: It was more urgent in our time.

‍Ijames: I think people who know Hamlet really well will be really satisfied to be able to find those—dare I call them Easter eggs?—and the people who don’t, it won’t matter because it’s just a play about a family that’s trying to figure some stuff out at this intense moment. There is some actual text from the play in there… but almost all of them are at the wrong spot.

‍What are you most proud of about this production and this collaboration?‍

‍Ali: I’m proud of the invitation for James to come work at The Public because that was long overdue. I’m just really proud that it’s happening because everyone’s fallen in love with him and his work.

‍Have there been any surprises or unexpected moments along the way?‍

‍Ijames: So [in rehearsal] we were going around the circle and we were like, “I do this, I do this…,” [and someone said,] “I am in charge of the illusions." And I was like, what? And now that I see what it’s going to be and how it’s going to work, I’m like, "Oh my God, this play absolutely needs that."

‍Ali: Well, that’s another example of a gesture on his part! ‘Cause he wrote, “Pap vanishes.” So I think—that’s a gesture. It’s vanishing, it’s an illusion, it’s a trick.

‍Ijames: And me coming from, like, basement theater, [Pap] just sort of [gestures vaguely], shrugs out in the darkness. But to spend the time and the energy to imagine what disappearing is on stage? It’s so wonderful to me. It’s so new.

‍Ali: I don’t remember a process where I’ve been so continually surprised by what the actors just do in the moment. We have an extraordinary group of actors who are surprising each other and themselves in ways that are so delightful. Every day, they’re continually finding all these new nuggets because they’re so attuned to the characters. I mean, one day they were sitting around having a conversation, and James and I realized, “Oh my God, it’s the characters.”

‍Ali: It just feels like lightning in a bottle.

‍If you had to describe this production in three words, how would you do it?

‍Ijames: [nodding to Ali] All of those are good.

‍Fat Ham is now in performances at The Public. For more information, or to purchase tickets, click here.