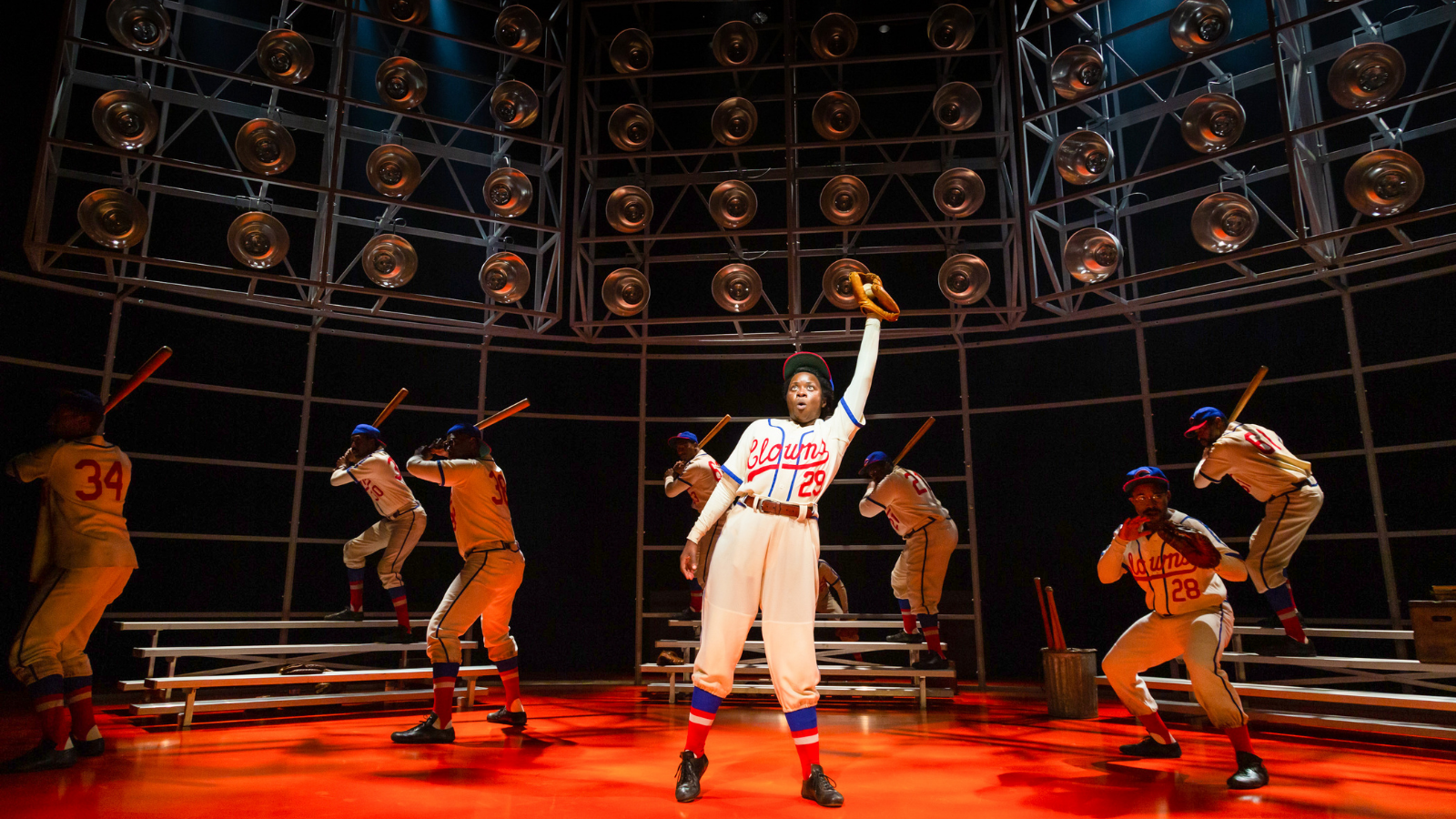 Playwright Lydia R. Diamond didn’t always understand why people are fanatical about baseball. When producer Samantha Barrie and director Pam MacKinnon commissioned Diamond to write about Toni Stone, the first woman to play professional baseball in the then-segregated Negro Leagues, she was hesitant. But when Diamond read Martha Ackmann’s Toni Stone biography, she was astounded.

“How do we all not know this woman?” she asked me in an interview over Zoom. “I thought it was insane, absolutely ridiculous, that we didn’t know. If we know Jackie Robinson, we should know Toni Stone.”

Throughout her research and writing process, Diamond wanted to get inside a baseball fan’s head to understand their devotion to the game. “I couldn’t quite figure out what is this thing that some people have for baseball, for sports, that makes them feel it so viscerally, and be invested in it in such a way that grown men cry when their teams lose or win,” she said. “I’ve always felt like I’m missing the key… It’s not unlike those of us who love and live for the theater, and people who are like, ‘Theater?’”

A crucial turning point in her playwriting process was reframing the play as a story of unrequited love. Toni Stone had a passion for baseball that led her to be a trailblazer, playing the sport from a young age until her professional retirement in 1954. Yet Stone’s identities (being a Black, androgynous woman) and the time period in which she lived (pre-Civil Rights Movement America) made her contend with multiple systems of oppression. Stone may have loved baseball, but the sport didn’t always love her back. For Diamond, this realization allowed her to write a play about the contradictions performing what you love to do, even when the rest of the world doesn’t understand.

Diamond was Zooming in from her new apartment. In between unpacking boxes and taking care of her dog Bella, she’s juggling many roles: professor at University of Illinois Chicago, television writer for Tokyo Vice, playwright adapting The Tap Dance Kid for New York City Center, and more. Diamond’s excited that the Roundabout Theatre Company’s Production of Toni Stone can finally premiere at Washington D.C.’s Arena Stage, since the COVID-19 pandemic delayed the initially planned 2020 production. There will even be a free live simulcast of the show at Nationals Park, bridging the sports and theatre worlds closer. For Diamond, it was important to bring the play back to one of the cities where it was developed.

“A lot of people, including Arena Stage, put a lot of support into helping me be able to make this play,” she said. “As I get older, I become more and more humbled that there are places and institutions and people who make room for me to do the work that I do, and I’m grateful.”

Many Arena Stage promotional materials for Toni Stone conjure the show’s resilience: it’s a tale of a woman whose skill and temerity allowed her to beat the odds. While Diamond wanted to demonstrate Stone’s pioneering attitude, she still wanted audiences to understand the troubling historical context that led Stone to be a pioneer at all. This includes prominently featuring “clowning” in the play: acrobatic acts, dancing, and comedy sketches that white audiences expected Black athletes to perform as part of the experience of going to a baseball game.

Clowning’s roots in blackface minstrelsy, and the terrifying expectations put on Black performers, are not lost on Diamond. “As an African-American woman, I just know. I feel as though I’ve been working in a rigged system in a rigged country for so long that that is kind of just what it is,” she said. However, not all Black baseball athletes who clowned always found it demeaning: many players had pride in showing off their athleticism. Diamond compares these players to the basketball team the Harlem Globetrotters, whose comedic exhibition games still subversively prove their physical talents. “We all delight in their antics, right?” she told me. “But it’s loaded because there’s a history behind it.”

In Toni Stone, Diamond wants particularly white audiences to feel the burden of putting on a good show. “It’s important that you know, said white audience, that what we do is at a cost, sometimes,” she said. “What we do when we are laughing in the face of pain is not a lack of awareness.”

For Black audiences, Diamond hopes Toni Stone also presents a multidimensional portrait of a Black community. “People who are marginalized and discriminated against don’t live in a deep, dark well of self-pity and frustration,” she told me. “We have lived, and we laugh, and we love, and get disappointed. It’s not all about the injustices that we navigate all day... the play has to do the same thing.”

Audiences walking into the show expecting a straightforward biopic might be surprised by the non-linear storytelling and non-mimetic staging. At the Arena Stage performance, I was particularly impressed by the relationship between Stone (Santoya Fields) and the prostitute character Millie (Kenn E. Head), which transcends any salaciousness to reveal a queer-ish intimacy rarely seen between two Black women onstage. I might have expected that storyline in a play explicitly about sex work (like Lynn Nottage’s Intimate Apparel or Eisa Davis’s Bulrusher). But in a show about America’s pastime? It’s an unexpected treat, making me consider the sensuality of bodies in athletic motion.

‍Toni Stone opening up one of America’s most famous regional theaters speaks to Diamond’s elevated place in the contemporary theatrical canon. When Diamond’s play Stick Fly premiered at the Cort Theatre in 2011, she was only the tenth Black woman to have a non-musical play on Broadway (joining the ranks of Lorraine Hansberry, ntozake shange, Whoopi Goldberg, Zora Neale Hurston, Anna Deveare Smith, Suzan-Lori Parks, Regina Taylor, Sarah Jones, and Katori Hall). Between Stick Fly and the shutdown of Broadway in 2020, only Danai Guirira and Lynn Nottage had bumped this pitifully small group up to twelve members.

Representation for Black women playwrights is slowly increasing. Antoinette Chinoye Nwandu’s Pass Over was the first play to open on Broadway since the shutdown. Lynn Nottage’s Clyde’s, Dominique Morriseau’s Skeleton Crew, and a long-overdue production of Alice Childress’s Trouble in Mind are all set to premiere on the Great White Way this fall. Still, when I bring up my anxiety that the COVID-19 Delta variant will impact these shows’ audiences, Diamond says she understands the mixture of emotions many people feel.

“I think only good comes out of many more artists being able to have [Broadway] on their resume, and that many more very talented and deserving playwrights finally have gotten a bit of what they should have had a long time ago,” she said. “And yeah, I’m deeply and profoundly disappointed and concerned because there’s no way in hell that people are going to fill up the seats to the degree that we would like for them to be full.”

Perhaps it’s the theatre industry’s own push-and-pull between representation and commodification, resistance and accommodation, and even pleasure and disgust that makes Toni Stone’s engagement with those ideas within Black performance so relevant. I’m reminded of the poem “I Feel Most Colored When I Am Thrown Against a Sharp White Background” by Morgan Parker, a poet invoking the words of Zora Neale Hurston in a similar way that Diamond is invoking the words of Toni Stone.

“They use us to distract us,” Parker writes. “My ears leak violet petals. / I sharpen them. I sharpen them again. / Everyone claps.”

Your love for something you feel like you can’t live without—whether it’s a profession, baseball, theatre, or even someone else—might not be mutual. You might burn with unrequited love. When you feel the edges of that sharp, violet affection, in the midst of thunderous applause, your love might even be used against you. Through Toni Stone, Diamond proves that sometimes you keep loving anyway.