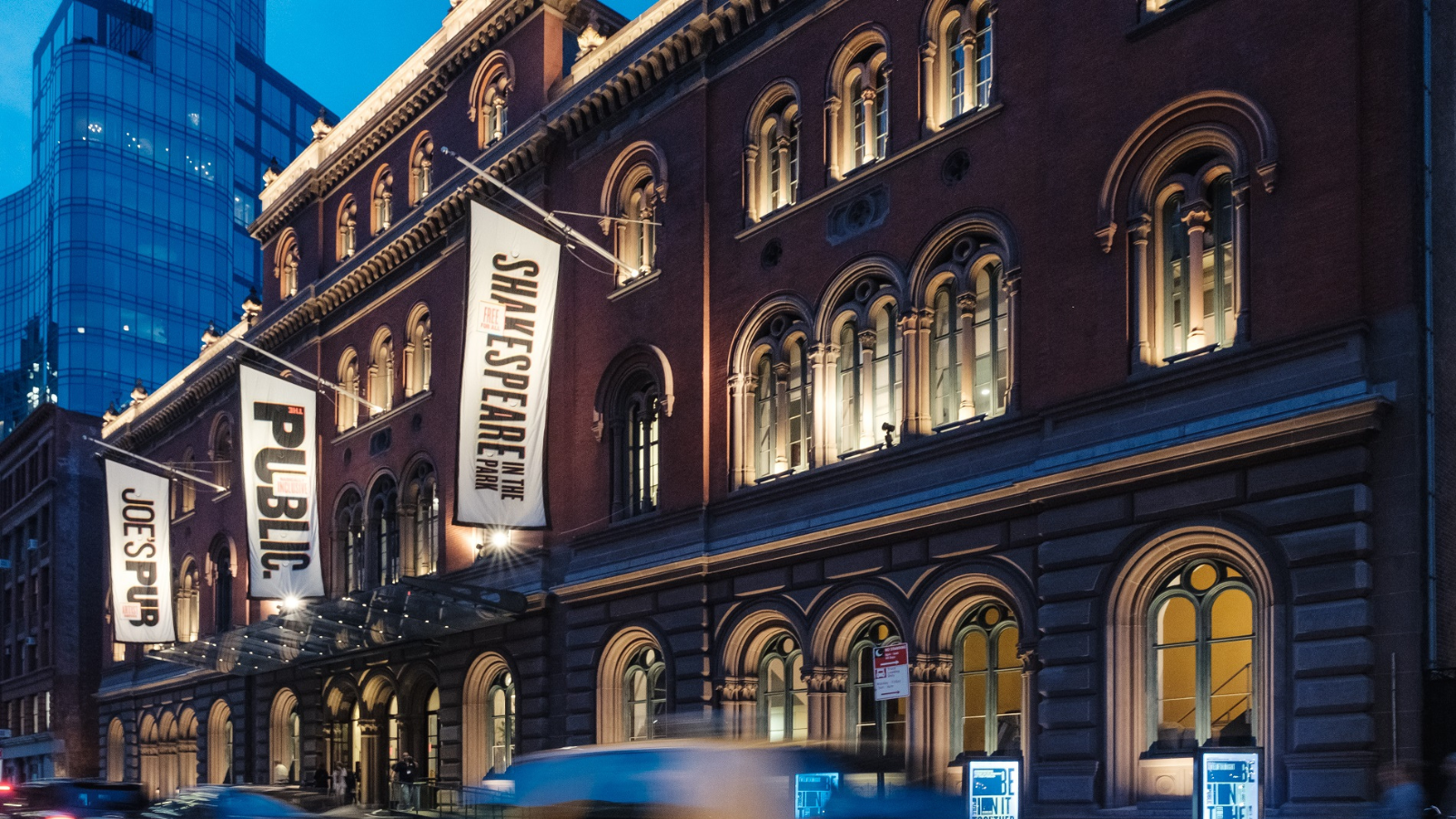 The exterior of The Public Theater | Photo: Joseph Augstein

The Public Theater is exploring works old and new in its upcoming 2022-2023 season. The slate includes two world premieres by Suzan Lori-Parks, a world premiere follow-up to James Ijames Pulitzer Prize–winning Fat Ham, and a Bushwick Starr co-production of a new play by Ryan J Haddad.

“In these tumultuous times, we urgently need the voices of our artists, ” said Artistic Director Oskar Eustis. “They alone can provide vivid, three-dimensional looks at what we are and what we might become. The artists who make up The Public's season are prophetic voices, who will give us sustenance, vision, and provocation… In this time of dramatic difficulty and radical challenges, this season grapples with fundamental questions about our future, as a field and as a nation.”

Kicking off the season is Baldwin and Buckley at Cambridge (September 24–October 16), conceived by Greig Sargeant with Elevator Repair Service, using verbatim text from a 1965 debate between James Baldwin and William F. Buckley Jr., in which two of America’s intellectual giants were invited to discuss whether “the American Dream is at the expense of the American Negro.” It concludes with an imagined scene between Baldwin and his close friend Lorraine Hansberry, researched and written by April Matthis and Sargeant. Directed by John Collins, the play stars Sargeant as Baldwin, Ben Williams as Buckley, Jr., Daphne Gaines as Lorraine Hansberry, Gavin Price as Mr. Heycock, and Christopher-Rashee Stevenson as Mr. Burford.

Next up is O’Hara’s take on A Raisin in the Sun (September 27–November 6), with a cast to be announced. The play follows Lena Younger, who has decided to use her late husband’s life insurance to move her family out of their cramped apartment on Chicago’s South Side. Her son, Walter Lee, has other ideas. Elsewhere, Madeline Sayet will star in the NYC premiere of her work, Where We Belong (October 28–November 27) in a co-production with Woolly Mammoth Theatre Company in association with Folger Shakespeare Library. Mei Ann Teo directs the solo show, which examines globalization from the lens of a Native American immigrant arriving in England at the time of Brexit.

The first of Parks’ double-bill of world premieres is Plays for the Plague Year (November 4-27) in Joe’s Pub. The work chronicles the immediate aftermath of the theatre industry shutdown due to COVID-19, with Niegel Smith directing. The Under the Radar Festival will kick off the new year, running January 4-22, 2023, with a full listing of plays and artists to be announced later.

The winter 2023 slate will also include the world premiere of the musical adaptation of the 1972 film The Harder They Come, produced and directed by Perry Henzell and co-written with Trevor Rhone. The show features a book by Suzan-Lori Parks, songs by Jimmy Cliff, music supervision by Kenny Seymour, choreography by Edgar Godineaux, and direction by Tony Taccone with co-direction by Sergio Trujillo. Celebrating its 50th anniversary, The Harder They Come tells the story of Ivan, a young singer who arrives in Kingston, Jamaica, eager to become a star. After falling in love and cutting a record deal with a powerful music mogul, Ivan soon learns that the game is rigged, and as he becomes increasingly defiant, he finds himself in a battle that threatens not only his life, but the very fabric of Jamaican society.

Also in winter 2023 is Haddad’s Dark Disabled Stories, directed by Jordan Fein. The autobiographical play is a series of vignettes about the strangers he encounters while navigating a city (and a world) not built for his walker and cerebral palsy. It probes implicit ableism and the assumptions people make about others. To ensure maximum accessibility, this production will feature American Sign Language, open captions, and audio description at every performance.

As the weather starts to heat back up, Ijames’ Good Bones will play at The Public in spring 2023, reuniting with director Saheem Ali after their successful partnership during Fat Ham. The play explores gentrification and the growing price of the American dream, with themes surrounding community, change, and the soul of a city. A work opportunity to revitalize the blighted neighborhood she grew up in has led Aisha and her chef husband Travis to buy and renovate a charming old house. But as everyone knows, renovation is expensive and stressful—both for buildings and the communities that surround them.

After premiering as an audio play, 2021 Susan Blackburn Prize winner Erika Dickerson-Despenza’s shadow/land returns in Spring 2023 with a live production. Magalee and her daughter Ruth are faced with the question of legacy when Ruth coaxes Magalee to sell their historic family-owned business as Hurricane Katrina begins her ruin. Directed by Candis C. Jones, the play is the first installment of a 10-play cycle traversing the Katrina diaspora in an examination of the ongoing effects of disaster, evacuation, displacement, and urban renewal rippling in and beyond New Orleans.

For more information about the season, visit PublicTheater.org.