The Stunning Reconsiderations of FAIRVIEW at the Wilma Theatre — Review 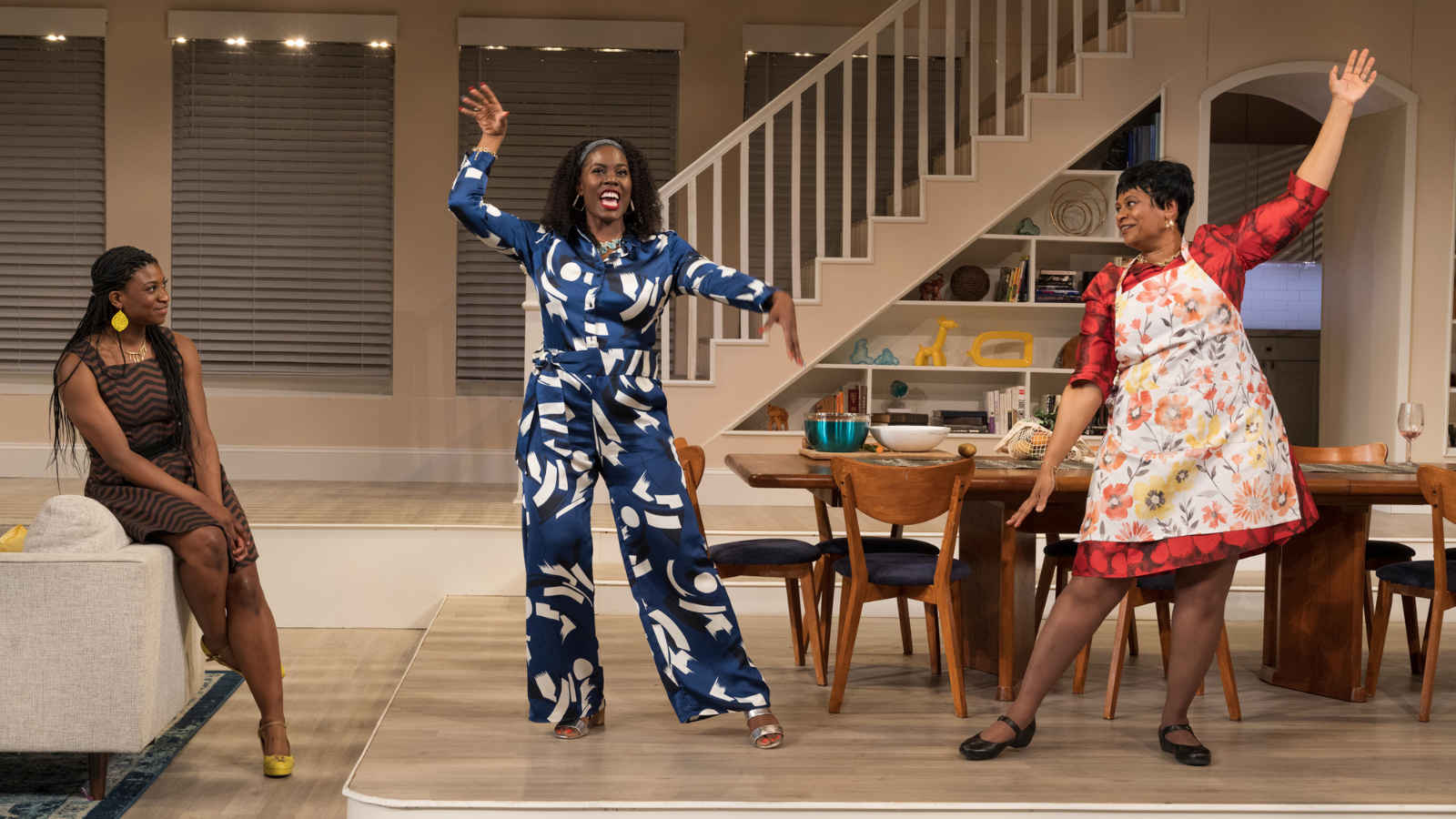 The thing is, when you laugh, you don’t think about the reasoning behind it. Laughter just happens. Especially under the dim lights of a theater, humor can often tug at crowds like a wave. Bodies inform other bodies on not only what you can laugh at but who you can laugh at.

I haven’t stopped thinking about laughter, and its many uses, since seeing Jackie Sibblies Drury’s exquisite Pulitzer Prize-winning play Fairview at Philadelphia’s Wilma Theater. Over the course of three uninterrupted acts, Drury made the audience laugh for all the reasons I’ve listed above. Because of this, throughout the show I wasn’t just listening to the actors on the stage. I was also listening to the people behind and all around me, curious to see who was laughing at what, or at whom.

Ever since Shakespeare’s Hamlet, it’s been said that the purpose of theatre is to hold up a mirror to nature, to use the imaginary “fourth wall” between a stage and theater seats to reflect the audience back to itself. But Drury doesn’t just break the fourth wall of the theatre. She warps it around the audience, turning the theater into a circular panopticon in which everyone (from the audience to the actors to the creative team to Drury herself) is on display. We may not have been able to control our laughter in the Wilma Theater. But after watching ourselves in that maddening panopticon, many of us started to question why the hell we were laughing at all.

Fairview starts like many stories you’ve already seen before. We’re in the home of the Black Frasier family, and set designer Lawrence E. Moten III has outfitted the stage as a beige-on-beige vision of suburban luxury. Frasier matriarch Beverly (Melayne Finister) is restlessly prepping for her mother’s birthday party, and the rest of her family is little help. Her husband Dayton (Lindsay Smiling) struggles to follow her orders to a tee; her sister Jasmine (Jaylene Clark Owens) keeps poking fun at her uptightness; and her daughter Keisha (Brett Ashley Robinson) is distracted by sports practice, college plans, and a crush on her friend Erika. More family members are supposed to be coming, but there’s an anxiety humming over the proceedings that soon can’t be ignored.

The plot I just described is purposefully familiar. With many Types of Black Characters present (affable husband, loud auntie, girl acting grown), the show might as well be A Raisin in the Sun, or The Fresh Prince of Bel-Air, or Diary of a Mad Black Woman, or even Chicken and Biscuits. But Drury pulls the beige rug out from under her characters (spoilers follow). The lights go out, the show rewinds to the beginning, and blinds are opened on the back wall to reveal a panel of four white people talking over the proceedings.

The white actors also play Types of White Characters, albeit ones with significantly more power over how they’re perceived. Jimbo (Matteo Scammell) is a white bro theorizing the idea of becoming another race; Suze (Krista Apple) is a feminist whose progressive bonafides aren’t as sturdy as they might seem; Mack (Keith J. Conallen) is a gay man interested in embodying the supposed fabulousness of women of color; and Bets (MK Tuomanen) is an Eastern European woman who doesn’t understand the American obsession with race. These characters soon start commenting directly on the Frasier family, and eventually invade the theatrical space in ways that cycle through appropriation, minstrelsy, and violence.

It’s been four years since Fairview debuted in New York at Soho Rep. Now, director James Ijames (a Wilma Theater Co-Artistic Director and a Pulitzer Prize winner himself for his play Fat Ham) carefully reconsiders what it means to stage the show post-pandemic. In previous productions, the quartet of white actors was heard but not seen during the entire second act. But Ijames doesn’t seem content with that, and he makes the white actors obscured but still visible to the audience. It’s as if whiteness can be obfuscated but not ignored anymore, and race must be physically seen immediately for the show to continue.

This is all accentuated by Thom Weaver’s masterful lighting design, which makes Moten’s set at times blindingly bright and at other times garishly pallid. At a key moment in the play, Weaver pulls off an astonishing feat: making everything onstage actually look as if we’re watching the show in black-and-white. It’s a clever way of illustrating the frustrating racial binary all the show’s characters are trapped in.

Fairview is at times an excruciating show to watch. It’s part of a set of shows written by playwrights of color that I call “White People Behaving Badly to Prove a Point about Whiteness.” It’s an expansive genre including everything from Slave Play to White Noise to The Thanksgiving Play. Case in point: the start of Fairview’s second act includes an overtly offensive conversation about how if Jimbo could be any race, he would want to be Asian while switching up Asia’s “traditional culture.”

The point of this conversation is to expose the essentializing racism that pervades casual conversation in white circles. But what was Fairview saying that I, as an Asian American, haven’t already heard? I’ve listened to people like Jimbo in countless talks with friends and coworkers and teachers and bosses and the whole damn world. So why was Drury making me listen again? I don’t need anti-Asian racism exposed to me, when it already composes my entire life.

If the show’s white characters feel unnecessary to people of color like me, what feels startlingly fresh in Fairview is the ability to watch other audience members react to these characters in real time. And so I return to laughter, and the dizzying ways in which it’s weaponized and reconsidered in this play.

At the beginning of Fairview, the ensemble of Black actors practically had the Wilma Theater audience in the palm of their hand. Finger-snapping and applause occurred with nearly every character entrance, hip-sway, and monologue. But once the second act started, we all had to reconsider our investment in seeing Black life heightened to such a theatrical degree. Were we really laughing out of pure joy? Or was there a cruelty in forcing these Black actors to perform a heavily exaggerated version of Blackness for us?

Even now, I’m still thinking about my audience’s laughter once the white characters started dominating the stage. Were we laughing out of recognition, thinking, “Oh I totally know white people just like that?” Or was it out of nervousness, thinking, “Oh my god they’re really going there?” Or was it out of relief, thinking, “Finally someone is exposing this racism?” Without talking to people in the audience directly after their laughter, it was impossible for me to tell why they were laughing. It was often impossible for me to identify why I was laughing.

As the show continued, it seemed like all the uses of laughter started to bleed into each other. Discomfort tinged joy, nervousness perfumed recognition, cruelty haunted cringe. As an audience we laughed, and then questioned why we were laughing, and then reconsidered what power we had in the theater to laugh at another person’s violences or pain. And this journey happened much more quickly for the people of color in my audience than the white folks sitting next to us.

Which leads me to the show’s much-discussed ending, where audience participation isn’t mandatory but heavily encouraged. I won’t give away the glorious experiment Drury conjures up, except to say that Drury does what I wished she had been doing all along: she finally speaks directly to the people of color in the room. Keisha finally gains control of the dazzling panopticon under which we’ve been surveilling ourselves, and asks us to listen to her. “Do I sound naive?” actress Brett Ashely Robinson asked the spare number of POC in the room. One woman enthusiastically responded “No!” “Have you heard me?” Robinson then asked, to which another person supportingly responded “Yes.”

I first saw a production of Fairview at D.C.’s Woolly Mammoth Theatre Company back in 2019, when I was only twenty. In a college newspaper review I wrote back then (one that’s painful for me to reread), I said “Although it’s impossible, [Fairview] gestures towards a world where people of color can exist without suffocating whiteness, pointing out its distance on an unreachable horizon. Almost out of view.”

Given the benefit of three years of reconsideration, and this thrilling new production of Fairview, I’m not sure if my first assessment of the show was entirely correct. Sitting in the Wilma Theatre, watching Robinson speak directly to me and actively ignore the white people in the audience, I felt that a world without suffocating whiteness was a little closer on the horizon. Drury’s end-of-show experiment is like laughter: you can’t control how it will happen. But in the Wilma Theater that night, the audience forced me to reconsider my preconceived notion about Fairview being a devastating piece of art. The audience offered me something I couldn’t have expected: hope that when I ask for it, white people will give me space and listen.

I’m not sure if that space will ever last. I also wonder why it took three years after seeing Fairview for the first time to feel a sense of peace when thinking about the play. Yet for a brief moment, I didn’t exactly laugh, but a cautious smile did beam through my mask.

I’m still reconsidering the intricate creative decisions at the Wilma that led me to that moment. But for now, I’ll just let it happen. Like laughter, hope is an uncontrollable physical reaction, and who am I to judge myself for such a sudden feeling? Perhaps Fairview itself has many uses. I’m grateful to have discovered a new one.

‍Fairview is in performance at Philadelphia, PA’s Wilma Theater through June 26. For tickets and more information, visit here.