The Tonys Should Nominate These Featured Actresses of CAROLINE, OR CHANGE and A STRANGE LOOP – Opinion 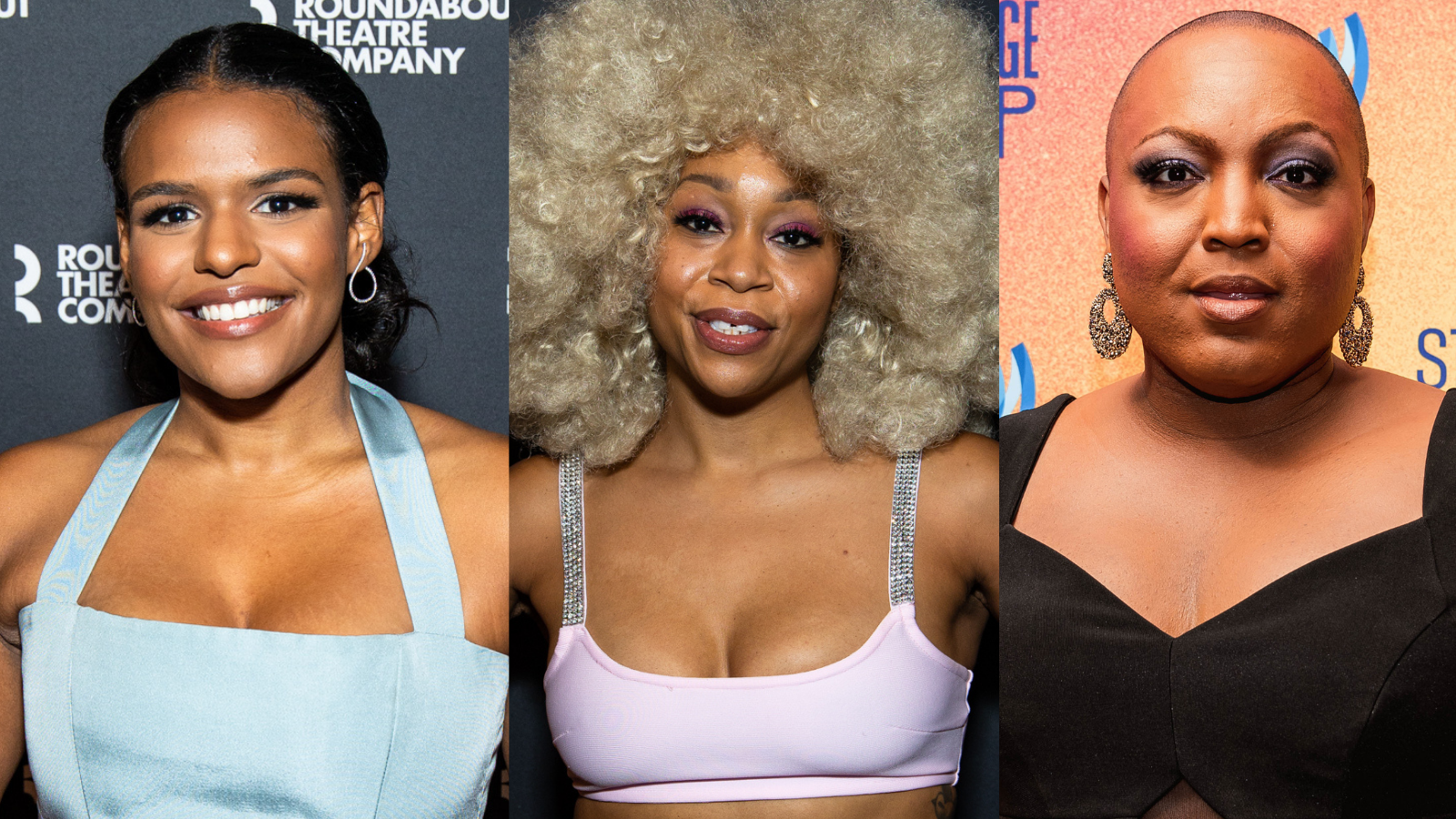 Best Featured Actress in a Musical has always been my favorite category to watch at the Tonys. It’s a space to celebrate new, up-and-coming talent (Ali Stroker, Lena Hall), but also to celebrate veteran talents who maybe haven’t gotten their due (Ruthie Ann Miles, Renée Elise Golsberry).

So whenever I see a Broadway show, I’m always on the lookout for those standout woman-identifying ensemble members, or actresses with one killer song. Like a subtle For Your Consideration campaign manager, I annually make the case for why these performers deserve your attention, even if they aren’t in a leading role. This year, I’ve discovered three Black women who I think truly deserve to be nominated for the Best Featured Actress in a Musical Tony.

Now, I want to be clear: I understand the unfair dynamics of rewarding Black actresses only in the supporting/featured categories at awards ceremonies. For example, while there have been nine Black actresses to win Best Supporting Actress at the Oscars, only one Black actress (Halle Berry) has won for a leading role. However, the Tonys have been fairly decent about awarding Black musical talent across their nominations. Since 2000, there have been three Black winners in the featured category, and six in the leading category.

Plus, when these featured actresses are part of primarily Black casts, the racial dynamics shift. That’s the case for the featured actresses in the casts of Caroline, or Change and A Strange Loop, led by Sharon D. Clarke and Jaquel Spivey, respectively. Unlike other featured roles, these Black women avoid being the “sassy best friend” or pure comedic relief for a white lead. Instead, these characters offer nuanced reflections of the Black communities' greater hopes, dreams, and struggles.

So, without further ado, let me make the case for why I think these three Black women should be nominated for Best Featured Actress in a Musical this year.

‍Caroline, or Change follows the Black maid Caroline Thibodeaux in 1963 Louisiana as she struggles to reconcile the shifting world around her with her strict adherence to the past. When it comes to this musical, there’s an abundance of riches of Best Featured Actress picks. A chorus of talented Black actresses play anthropomorphized versions of household appliances in Caroline’s workplace; you could honestly fill up three of the nomination slots with just the trio that plays the motown-styled Radio (Nasia Thomas, Nya, and Harper Miles).

But I’m going to go out on a limb here, and say that the most intriguing performance from this Broadway revival might be Tamika Lawrence as Dotty Moffett.

I sadly wasn’t able to see Lawrence in performance, since I caught a matinee of the show the weekend right before Omicron truly began to shut down shows. But the astounding intonation of Lawrence’s voice on the new cast recording brought out a startling realization in me: Dotty might sneakily be one of the most impactful characters in the show.

Dotty is a fellow maid and friend to Caroline, one who initially represents all of what Caroline is not: modern, adapting to change, striving to be educated, and romantically fulfilled. It would be easy for a performer to paint Dotty broadly, making her one of the purely unabashedly funny characters in the musical and have Dotty simply tease Caroline the way the other characters do.

But under Lawrence’s richly considered performance, Dotty became a character just as full of sorrow as Caroline. While it’s true that Lawrence’s bright voice is still able to find humor and laughter when the role requires it, Lawrence shaded all of her interactions with Caroline with an undertow of melancholy. It’s an incredibly shrewd interpretation. Lawrence transformed Dotty from a snappy literary foil into an aching woman willing to endure Caroline’s lacerations not because of pity but because of devotion to her friend.

This interpretation achieved its greatest emotional impact in “Sunday Morning,” the song before Sharon D. Clarke brings the house down with an eviscerating “Lot’s Wife.” In the latter song, Caroline lets water burst forth from the impenetrable emotional dam she constructed the entire show. Such a release wouldn’t be possible without her friends breaking open the dam, and wouldn’t be possible without Dotty’s encouragement for change. “I know it hurt to change. / It actually hurts, learning something new,” McClesky sings on the soundtrack. “But / folk do it. / Every day, all the time, / alone, afraid, folks like you.”

Those lines are Caroline, or Change’s thesis, delivered by an often overlooked character in the musical. For singing these lines with such compassionate grief that I listened to them seriously for the first time, Lawrence deserves the world (and in my opinion, a Tony nom).

The role of Emmie may be the more obvious choice to nominate for Best Featured Actress in a musical. After all, Anika Noni Rose won the award in 2004, the original Broadway production’s sole Tony win. It’s easy to understand why voters were attracted to Rose in 2004: the soaring clarity of her voice, along with Emmie being such a juicy role, may have proved irresistible to even those hesitant about Caroline, or Change itself. But when I saw Samantha Williams in performance as Emmie, she brought out a unique scrappiness in her character that I hadn’t considered before, one that I deeply appreciated.

Emmie is the headstrong daughter of Caroline who also starts the show as a foil to her mother. Unlike Caroline, Emmie is barrelling ahead toward the future (as seen in the song “I Hate the Bus”), willing to stay out late, call out racism within a white family when she sees it, and is even full of playful energy (as seen in the game-song “Roosevelt Petrucius Coleslaw” which she sings with her young brothers).

It’s a tricky role, one that requires an actress to embody youthful naïveté and fearless strength simultaneously. Instead of sticking too closely to Rose’s sweet and mellifluous sound, Williams sang off the beaten path, filling Emmie’s voice with rasps, growls, and sharp consonant enunciations. It’s a daring risk that mostly paid off, turning her Emmie into a young girl even more full of activist determination and less concerned with how others (even the audience) perceived her. I personally loved it, since I think Williams channeled the uncontrollable ruthlessness that drives Emmie. It’s a restless quality sometimes hidden within the lush beauty of Jeanine Tesori and Tony Kushner’s score.

Emmie reaches her apex at the end of the show, an “Epilogue” that reveals Emmie to be instrumental in taking down a Confederate Statue. Part incantation, part condemnation of white supremacy, part prayer for family, it’s a stunning song that would overwhelm a performer of lesser skill. But Williams easily tackled director Michael Longhurst’s elaborate staging, which reconfigured Emmie in the space previously held by the Confederate statue. Through the midst of the complex movement, Williams still found the opportunity to enrich the “Epilogue” with a gospel fervor, imbuing the song with defiant celebration, like a Black spiritual.

For capturing a sense of joy and grief simultaneously, for making a well-known character her own, and for nailing the finale of a complex stage musical that hinges on its ending, Williams deserves a Tony nom.

Finally, I want to take things over to the recently-opened A Strange Loop, a new musical which only has one featured actress, but one who is absolutely instrumental in facilitating the night’s wild ride. A Strange Loop follows Usher, a fat Black gay man attempting to write a musical about a fat Black gay man (the very show we’re witnessing). He’s hounded by a chorus of Thoughts who embody his fears, insecurities, family members, and pressures to conform to sanitized versions of Blackness and queerness.

The only woman in this show is L Morgan Lee, who plays Thought 1, and the show’s program notes her as “the first openly Transgender actress to originate a role in a Pulitzer Prize-winning piece of theatre.” Playing a Thought in A Strange Loop requires extraordinary versatility as both a performer and singer. The Thoughts must transition between multiple roles and genres seamlessly, all while being “as individual in expression as they are a unit,” as playwright Michael R. Jackson’s script notes.

But Lee is a superstar in the making, and when I watched the show at D.C.’s Woolly Mammoth Theatre, I couldn’t take my eyes off of her. She never once mugs for the audience or tries to call attention to herself, but instead embodies all of her characters so excellently it’s a dopamine rush every time she enters the stage. Lee ably moves between many different roles, including the supervisor of Usher’s sexual ambivalence, a theatre workshop helper, a Grindr dominatrix, and even an iconic turn as Whitney Houston. She fills the show with a playful passion that’s only accentuated by the other fantastic actors playing her co-Thoughts.

And, of course, there’s the solo number Lee knocks out of the park, “A Sympathetic Ear.” For most of A Strange Loop’s runtime, the Thoughts taunt Usher for his body, his sexuality, and his race. This song provides a brief respite of love and admiration in a world of cruelty; Lee acts as a Wicked-loving woman who consoles Usher while he’s feeling his lowest, ushering the Broadway show The Lion King.

Lee’s belt is commanding, and as she was singing, I could feel the audience sitting up and taking note of the beautiful grace this woman was extending towards us. “If you’re not scared to write the truth then it’s probably not worth writing,” she says at the end of her solo. Michael R. Jackson may have written these words, but it felt like Lee had come up with them and was speaking them directly to me.

For filling in ambiguous characters with a depth of knowledge and feeling, and for providing such a memorable, transcendent theatre moment, L Morgan Lee deserves more than just a Tony nomination. She probably deserves to win Best Featured Actress in a Musical.

Tony nominations are hard to achieve and very political. We all have our biases, and I myself am biased towards Caroline, or Change and A Strange Loop since they are the only Broadway musicals I’ve been able to see during a year of intense COVID-19 waves. However, I haven’t been able to stop thinking about the performances of Tamika Lawrence, Samantha Williams, and L Morgan Lee, and I want to celebrate their remarkable accomplishments.

These three actresses may not be the leads of their musicals, but their characters push the musicals’ leads to either embrace or reject change, and provide crucial takeaways for the audience to consider. They are the hearts of Caroline, or Change and A Strange Loop. Regardless of Tony nominations, I’d like for these women to receive their flowers, whether that’s on the stage or right here on the page.

‍Caroline, or Change concluded its Broadway run at the Studio 54 Theatre on January 9, 2022. A Strange Loop is in performance at the Lyceum Theatre. For tickets and more information, visit here.