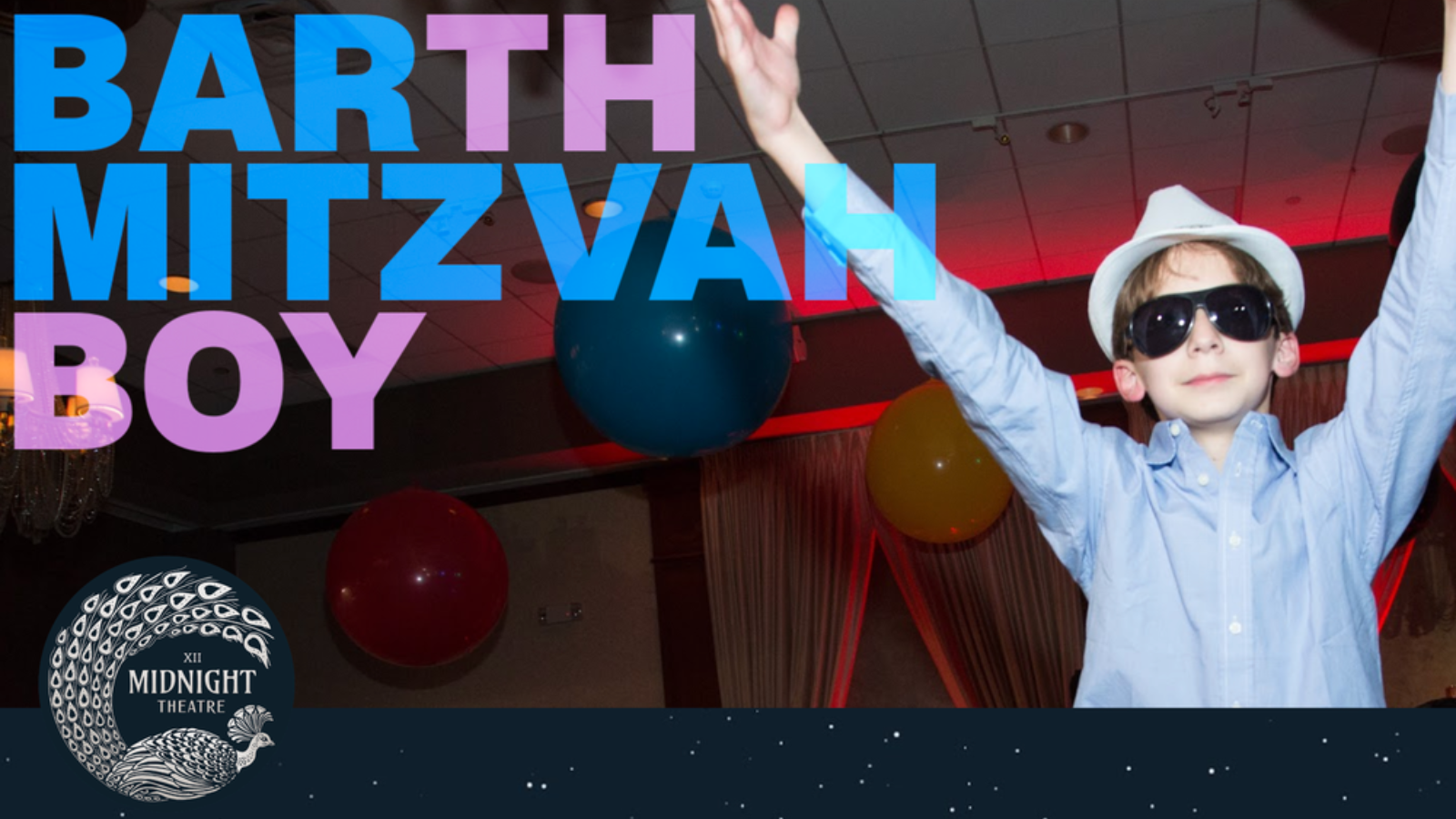 When he was 13 years old, Andrew Barth Feldman had his bar mitzvah. This weekend on January 28 and 30, at the Midnight Theatre, he’s doing it again. Why not? In Feldman’s view, bar mitzvahs should be allowed at any age. Or at least, any time you are entering “a new stage of adulthood.”

If it’s also an excuse for Feldman to gather an incredibly talented group of singers and musicians to perform an evening of his own original music then, well, all the better. So Barth Mitzvah Boy was born.

Now 20, Feldman has seen some big life changes in the seven years since bar mitzvah #1. He won the Jimmy Award for Best Actor in 2018, then took over the lead role in Dear Evan Hansen the following year, making his Broadway debut at the age of 16. Appearances in High School Musical: The Musical: The Series and Ratatouille: The TikTok Musical followed. Feldman has also released two singles and performed an original solo show, Park Map, at 54 Below.

Feldman will appear in two feature films this year: Netflix rom-com A Tourist’s Guide to Love, and coming of age comedy No Hard Feelings, where Feldman co-stars alongside Jennifer Lawrence.

He spoke with Theatrely about the unique opportunities afforded by new venue Midnight, attending the closing performance of Dear Evan Hansen, and what his next steps are.

‍What is the story behind your new show Barth Mitzvah Boy, and how did this iteration come to be?
‍We talked about a number of ideas for shows, but it was someone at Midnight, Molly Heller, who first mentioned the idea of doing a bar mitzvah show. And from there, it all just unfolded. It paired really nicely with what I’m looking to do for my soul right now, which is to be writing my music and showing that music. To do so in a way that was unconventional and funny, and had the same kind of rhythm as we had found in Park Map, only made sense.

‍So what can we expect from the Barth Mitzvah Boy, and what is it about the Midnight venue that will make the show unique?
‍What’s amazing about Midnight is that there are projection screens all around the theater. Like 270 degrees, all around the audience. There is so much to be done there. As soon as I saw it, I knew I was the guy to mess around in there.

I’ve been working on a lot of the projections myself with designers, because it is a huge part of the show, almost if not more important than the music to the world we’re building around the audience. And it's been so fun to dream that up with Marc [Tumminelli, who directs].

‍The first thing that pops into my head is how much you could have made use of that in Park Map! Like as a way of immersing people into the different Disneyland rides.
‍Absolutely–we talked about that too. What was great about Park Map was that as I talked about Disneyland, the images could live in your head. We let it be more of an idea than anything else.

But with this show, we’re bringing you into the world of each of these songs, because each world is very specific. We’re totally not shying away from doing Disney-inspired stuff, as well as stuff that has nothing to do with Disney at all. None of it is sponsored by Disney, I should say.

To give you an idea without spoiling anything: We’re doing some Star Wars songs, so think about all the stuff we can do with projections for that. That’s been the game of it: how can we use this medium to bring you into the world of the song. Not overwhelming you, not making you feel like you’re literally on a ride–like you’re at an adult’s bar mitzvah!

‍And it’s all your own original music, correct?
It’s all my music, yeah. Which honestly is scarier than anything else. This is the first time that I’m just sharing my music, as me, in this way, and it’s super duper scary. I was worried before we dove into the show that I wasn’t going to have enough music, or enough of a variety of music. Then I wrote it all out and realized I actually have a ton of music that I’m really excited for people to hear.

‍Park Map felt like a big progression for you, in terms of its intimacy and, at times, how personally revealing it was. Does Barth Mitzvah Boy feel like it’s continuing that growth?
It’s definitely less story-driven than Park Map. We have songs from all different projects I’ve worked on and am working on, so to give that a throughline would just be clumsy.

The argument of the show, if there is to be one–which there is!–is that you should be able to have a bar mitzvah again every time you enter a new stage of adulthood. And that’s where I’m at right now. So the show itself is a kind of arrival, in my sharing these songs and sharing the stage of life that I’m in.

But more than anything else, it’s a party, whereas Park Map was a lecture.

‍What is that new stage of life that you feel like you’re starting to embark upon?
The focus on my music is, in and of itself, a big one. In my life as a whole it’s stuff like, I’ve got my own apartment now, I’ve got a big movie coming out this year that I’m really excited about. There’s a lot coalescing right now that feels like it has led up to Barth Mitzvah Boy. So it felt like the time for me to re-enter God’s eyes as a new man.

‍In No Hard Feelings you are leading a major film opposite a huge star, Jennifer Lawrence. What was that experience like?
‍It was really incredible to film. I had so much fun, which is all I could ask from my first big role in my first big movie. Working with [Lawrence] and getting to know her was just spectacular. I really do consider her a great friend of mine and a really special person in my life.

It’s the funniest script I’ve ever read, and it just got funnier every day with the ad-libs we were doing and the dynamic of the two of us on screen together. It’s the kind of movie that I just can’t wait to see.

‍Would you be happy to see your career move forward in this way, a film here, a film there, but always circling back to theatre or adjacent work?
Absolutely. For me it will always come back to self-generated projects, and also to theatre specifically, I always need to have at least a foot in the theatre door, I can never have it closed behind me.

‍You attended the closing performance of Dear Evan Hansen on Broadway this past September. I imagine that was an emotional experience.
‍It was very emotional and special, and also just an excellent performance of the show. Sam [Primack, who played Evan at the show’s final performance] was breathtaking, and I was so proud of him. I cried a lot. I sat with my very good friend Alex Boniello. Who is in Barth Mitzvah Boy, as is Sam, and as is Gaten [Matarazzo], who was also in that closing cast.

I thought it would feel like a high school reunion, but it actually felt a lot more like a family reunion. Because that was a special place to work for a year, and I made so many connections. I was so young, and I was taken such good care of by that company.

Talking about beginnings and endings–I started filming for No Hard Feelings the next day. So it felt very much like a final piece of closure with Evan, finally saying a proper goodbye, and then another door opening.

‍Is there anything I haven’t asked about the concert that seems important?
‍We do have a full band, which is really exciting. We’ve got a cello, we’ve got a bunch of the historical cast of Sing Street in the band, which is crazy. It’s a rocking band that is going to play the ever-loving shit out of this music.

It’s gonna be really chill and like, I don’t know why someone would not want to go to a bar mitzvah. So I encourage people to dress as they would if they were going to an adult bar mitzvah. That’s all this is.