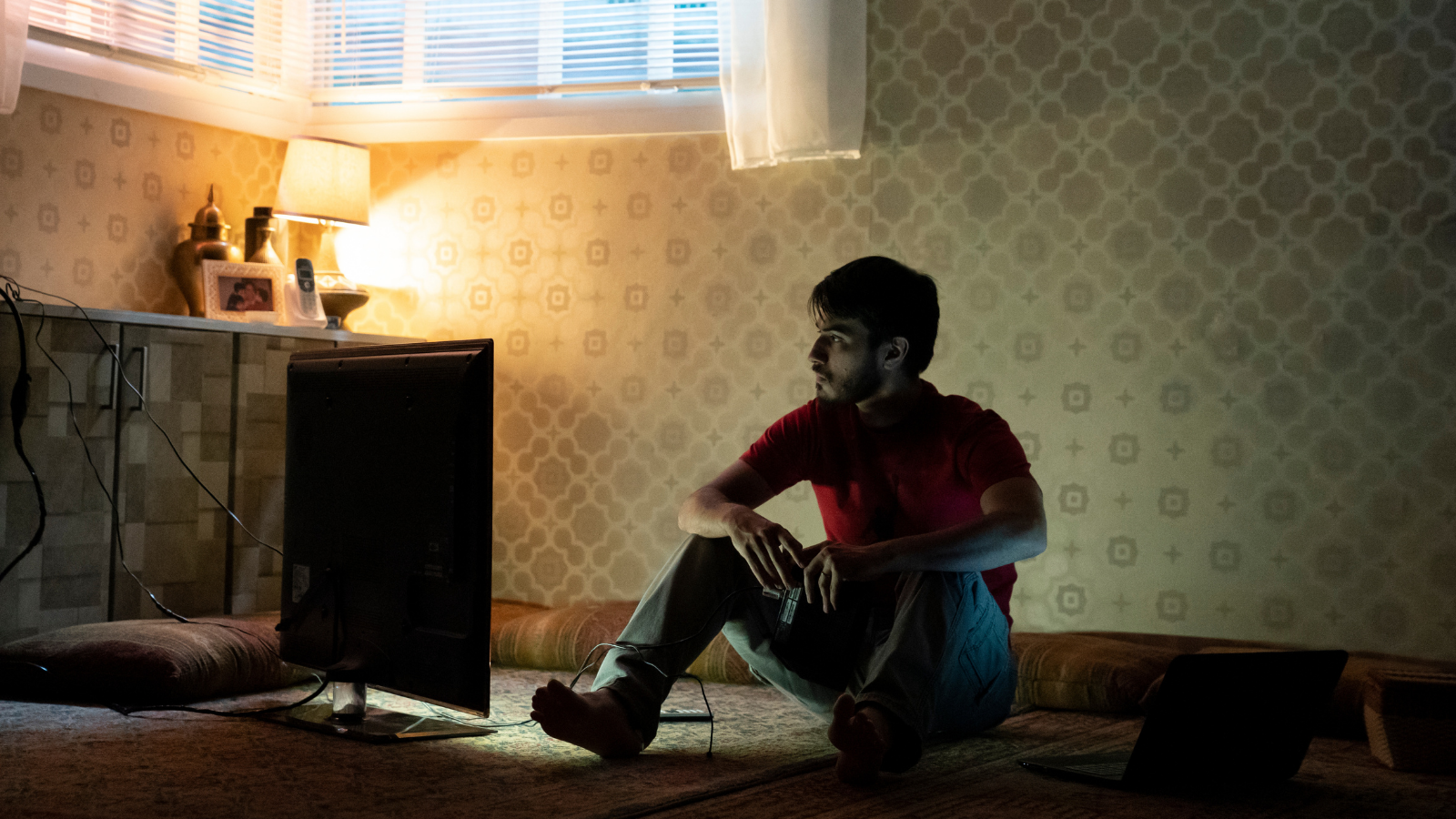 It appears that one of the major vibes, if you will, of post-quarantine theatre is tension, in particular claustrophobic, interpersonal tension that builds between people stuck in a small space or a single room. This mood permeates recent plays including Pass Over, Dana H, Is This A Room, Last of the Love Letters, The Fever, and now, Sylvia Khoury’s Selling Kabul at Playwrights Horizons. Of course, these plays all or mostly pre-date the pandemic, and yet after so much time being stuck inside, they feel different, more intense and real than ever before. The notion of a single-room play is nothing new, but now, after many of us have been living single-room lives, they have a newfound relevancy and relatability. They haunt us in ways that feel familiar.

Selling Kabul concerns Taroon (Dario Ladani Sanchez), a man hiding out in his sister’s apartment in Afghanistan in 2013; he acted as a translator for the Americans and now the Taliban are hunting him. Khoury’s piece offers an experience we are rarely given, an insight into what it was like on the other side of America’s longest war. In 2013 Obama announced he would be cutting the number of US troops in Afghanistan in half. At the time, this seemed like a positive step in slowly ending a never-ending conflict. However, Khoury reveals the human toll of that decision, which left many in Afghanistan in danger as the Talbian increased its presence.

Taroon begins the play desperately trying to connect a Wi-Fi router to see if his Special Immigrant Visa has been approved and sent by the US. We learn that this is a Sisphysian ritual for him, something he is waiting for but appears to never be coming. This, like so much of the play, strikes a realistic chord of pain: Taroon is one of the many real-life interpreters that the Taliban targeted (something the US was aware of since 2003).

Unsurprisingly, the situation in the apartment is tense. I can appreciate a play that makes its stakes explicit right from the beginning: within moments we learn of Taroon’s situation and his sister, Afiya (Marjan Neshat) makes it clear the danger he is in and the rules he must follow: no lights on, no TV, no leaving the apartment, no visiting his wife or the baby she just gave birth to. Like the router refreshing, we get to see a more painful ritual of Taroon checking his duffel bag of emergency supplies and quickly hiding in a coat closet.

While the play seemingly gives us all the information we need right away, Khoury subverts expectations by continually sneaking in delayed exposition. Each time someone enters the apartment we learn a terrifying new piece of information, slowly gathering that the situation is worse than it appears–and worse than Taroon believes.

While the plot is centered on Taroon, the play is less about him than about the ripples that his hiding has on those around him–and in a larger sense, the impact that the US’s involvement in Afghanistan and the Taliban’s control of the state have on everyday people. Afiya and her husband, Jawid (an excellently calm Mattico David), a tailor, sew uniforms for the Taliban, implicating themselves in the very group that is hunting their fugitive brother, but doing what they feel like they have to to stay alive and stay safe. They initially defend their choices, but by the end of the play, everything is called into question, and they wonder what was really motivating their choices and what their priorities are.

Afiya and Jawid are both rattled by the life they lead, living on the edge, struggling to both keep Taroon and themselves alive, all while trying to conceive a child. Outside of the apartment, but frequently intruding when she is least wanted, is family friend Leyla (Francis Benhamou), who is unexpectedly drawn into the drama. While Taroon is the one hiding in the closet and unable to see his wife and newborn, the play highlights the extreme cost that this has on those around him and the pain that Afiya, Jawid, and Leyla all must endure on his behalf.

Though the tension steadily builds, the playwriting, acting, and direction (by Tyne Rafaeli) do not always adeptly handle these shifts, which sometimes come across a bit bumpy, or in the hands of Neshat and Benhamou delayed or manic. Despite some unevenness, Selling Kabul is an important piece of theater, especially for American audiences, offering something that we very much need to see, need to talk about, need to think about, and need to remember. This is part of history, and thankfully Khoury has written it down.

Selling Kabul is now in performance at Playwrights Horizons through December 23, 2021. For tickets and more information, visit here.