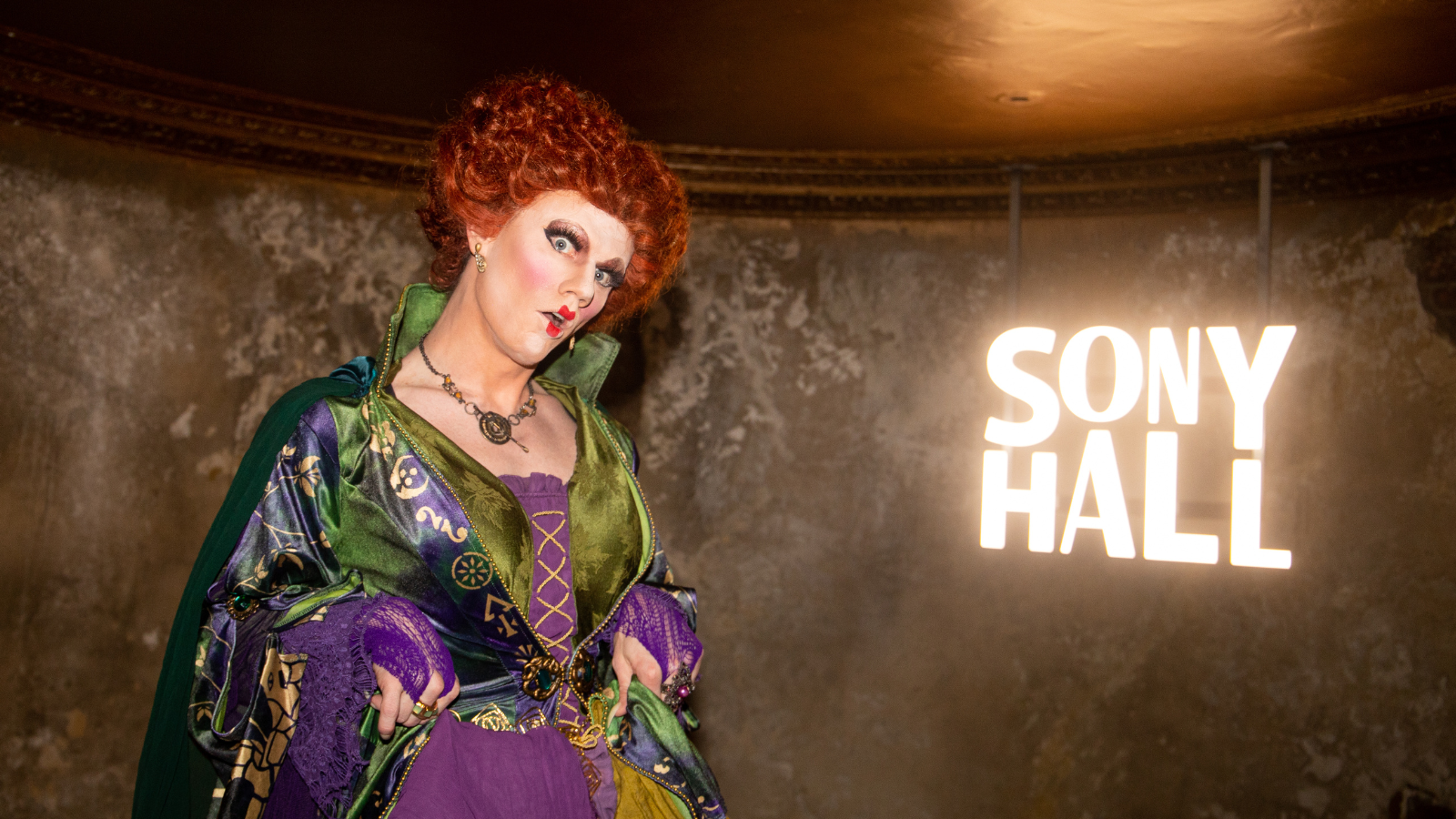 Hello, Winifred! It’s truly an honor to meet you. I’ve been a fan of your work for decades, as I hail from the town next to Salem. I cannot wait to see you perform I Put a Spell on You live at Sony on October 23 to support Broadway Cares/Equity Fights AIDS.

If you have a moment, while not sucking the liiiiiives out of the children of NYC and Salem and the rest of the world, and being in the middle of rehearsals, I have some questions for you.

‍Let’s talk a little bit about your concert! What might fans be spooked by at the show?
‍It’s Halloween, darling! What WON’T you be spooked by? Let’s just hope that demented clown doesn’t try to ransack MY night again. I hope that Batman is doing his job on the 23rd.

‍Are there any special guest stars you can reveal will be joining you on stage?
‍Cruella is always so kind to lend her jazzy vocal stylings and as long as Oogie Boogie and his henchman can behave, he’s quite the entertainer.

‍Why is Broadway Cares important to the Sanderson Sisters?
Broadway SCARES/Equity Fights for Witches… is an organization near and dear to my cold dead heart. It’s a cause I can get behind!

‍Will there be any homages to the Hocus Pocus 2 at your concert?
‍It’ll get a shout-out, for sure—but I did hear those damn Dennison’s were missed by audiences. I’m sure they will try their best to thwart our plans.

‍How can fans see you perform if they’re not able to visit Sony Hall this year?
‍My sisters and I have become quite tech-savvy after understanding the children flock to the interweb on an hourly basis. We have come up with a brilliant plan to reach even MORE children through Broadway On Demand starting Oct 30th at 7 PM ET and the week following.

‍Let's do some speed-round questions! The ‘90s were pretty cool…but what era that you missed would you have wanted a virgin to light the Black Flame candle (and why)?
‍The 20’s darling—everyone seemed to be so WICKED back then.

‍Any make-up tips for aspiring witches?
‍Who needs makeup when you have the souls of children to keep you young and beautiful?

‍Which famous villain would you most like to go head-to-head against?
‍I think I could take Lord Voldemort

‍What’s one power you’d like to add to your repertoire?
‍Invisibility

‍Which Broadway hunk would you like to take out on a date? (I’ll make sure Sarah is distracted so we don’t end up with a Billy Butcherson situation)
‍Gavin Creel

‍When you’re out of a dead man’s toe, what is a suitable alternative?
‍A finger will suffice

‍Which famous Broadway trio would like to be besties with?
‍The Plastics [from Mean Girls]

‍Which current Broadway show would you like to star in—and which character would you play?
‍The Witch in Into The Woods—not too far off, I’d say!

‍Who is your favorite Broadway character with magical powers?
‍The Genie from Aladdin‍

‍Would you ever let Mary or Sarah have a solo by choice?
‍NEVAH!

‍Do you have a favorite Halloween costume?
‍I AM Halloween, darling—and I don’t NEED a costume

‍Are there any deep cuts of songs you’ve performed that you wish had been recorded but are lost to time?
‍Bette Midler’s “The Rose”

‍Any truth to the rumors you’ll be playing a role in the upcoming New York City Center gala presentation of Parade?
‍Winifred shant be making her Broadway debut as anyone but herself, but I do hear Jay Armstrong Johnson might be seen at City Center in November.

I Put a Spell on You was created by and stars Jay Armstrong Johnson (The Phantom of the Opera), who graciously agreed to do this interview in character as Winifred. The annual show is a spoof/tribute to Hocus Pocus, and is set for October 23 at 8 PM at Sony Hall in NYC.

Audience members are encouraged to dress up for the occasion—with some of the best costumes awarded prizes throughout the evening! On top of it all, the concert will be followed by a dance party at Sony Hall.

For more information and tickets, click here. The event serves as a fundraiser for Broadway Cares/Equity Fights AIDS. Every ticket purchased will help those across the country affected by HIV/AIDS, COVID-19 and other critical illnesses receive healthy meals, lifesaving medication, emergency financial assistance, housing, counseling, and more.